The canonical Wnt signaling pathway, mediated by the nuclear transcription factor β-catenin, is a primary signaling pathway that orchestrates various biological processes, such as cell proliferation, differentiation, organogenesis, tissue homeostasis, tissue regeneration, tumorigenesis, and tumor immune evasion. Aberrant Wnt-activation and nuclear β-catenin up-regulation drive oncogenic gene transcription in many human cancers. Mutations in key components of this pathway have been found in a significant number of sporadic and familial cancers. Inhibition of this pathway in various oncogenic model systems further validates its critical role in cancer growth and metastasis. Therefore, the Wnt/However, since the discovery of the Wnt/β-catenin pathway involvement in cancer in the 1980s, more than 40 in­hibitors targeting this pathway have been reported in the literature, with nearly 20 proceeding to clinical evaluation, yet none have made it to FDA approval. Reasons for this failure center around two major issues. The first is that the key effector of the Wnt/β-catenin pathway, nu­clear transcription factor β-catenin, lacks enzymatic activity and possesses no sur­face structures suitable for drug binding. Hence, drug development strategies must target other, more druggable components of the pathway either upstream or down­stream of this pathway. β-catenin pathway has long been considered a high-value oncology target.

Upstream approaches include reduc­tion of Wnt ligand signaling, either at the receptor level, or the subsequent transduc­tion of the Wnt signal by Dishevelled (Dvl). However, these approaches are limited in their specificity due to cross-regulatory ef­fects on other signaling events activated by Wnts, such as the non-canonical Wnt pathways that lead to PKC and JNK acti­vation. Moreover, these therapeutics are ineffective in cases where the aberrant Wnt signaling is activated by mutations in downstream components, such as Axin, APC, or β-catenin.

Finally, several of the enzymatic com­ponents of the Wnt signaling cascade that could potentially serve as attractive targets for small molecules, such as GSK-3β, CK1α, and β-transducin repeat containing protein (β-TrCP), have broad activity and regulate multiple other signaling path­ways, thereby diminishing their suitability as specific Wnt/β-catenin pathway targets.

An even more global challenge to up­stream approaches is that β-catenin is also found in the cell membrane and cytoplasm of normal cells where it is an important structural protein in cell-cell adherence junctions. So, compounds that reduce the global cellular levels of β-catenin (such as targeting WNTs, RNAi therapeutics and tankyrase inhibitors) have a significant risk of disrupting these junctions. Such pertur­bations in cell-cell adhesion is often asso­ciated with the initial stages of tumor metastasis. Moreover, disruption of the ad­herence junctions might be deleterious to the structural integrity and viability of cells, such as the mucosal barrier in the gut and tight junction barrier in the epidermis, re­sulting in adverse systemic effects such as GI toxicities and skin reactions.

Given these challenges, other devel­opment efforts focus downstream at the nuclear β-catenin level by targeting the nuclear transporters and coactivators of β-catenin. Because the oncogenic functions of β-catenin are derived from the nuclear transcriptional activation of the protein, this strategy has a greater promise of specifically disrupting cancer cells.

Compared to the upstream ap­proaches, these therapeutics are also more effective for loss-of function muta­tions in APC and gain-of-function muta­tions in CTNNB1 (the gene that encodes β-catenin protein). However, the selectivity for Wnt/β-catenin pathway may vary, be­cause these nuclear factors may have other functions, including interactions with other transcription factors, thereby poten­tially influencing many signaling pathways besides Wnt/β-catenin pathway, leading to various off-target effects.

Table 1 illustrates a comparison of the therapeutics targeting the Wnt/β-catenin pathway currently being evaluated in clin­ical trials. Transducin Beta-like protein 1 (TBL1) and its highly homologous family member TBLR1, have recently emerged as attractive targets for altering nuclear β-catenin sig­naling. TBL1/TBLR1 are evolutionarily con­served proteins that share high structural and functional similarities from yeast to human. TBL1/TBLR1 are F-box/WD-40 repeat containing scaffold proteins that associate with members of coactivator or corepressor complexes, including NCoR/SMRT and NFkB through its N-ter­minus hydrophobic pockets.

In response to Wnt pathway activa­tion, TBL1 and TBLR1 are SUMOylated and released from the NCoR/SMRT core­pressor complex. SUMOylated TBL1/ TBLR1 subsequently binds β-catenin and translocate to the nucleus. The direct phys­ical interaction between TBL1/TBLR1 and β-catenin inhibits β-catenin degradation in the nucleus.

Binding of TBL1/TBLR1 to β-catenin also facilitates the localization of β-catenin to the oncogenes and activates β-catenin-dependent gene transcription. The recruit­ment of TBL1-TBLR1 and β-catenin to the Wnt target gene promoter is mutually dependent. The positive synergistic mechanism of Wnt activationATBL1 SUMOylationABL1/β-catenin interaction­AWnt activation provides a unique oppor­tunity to preferentially target oncogenic Wnt/β-catenin signaling amplification while leaving other normal physiological processes that depend on this signaling in­tact. TBL1/TBLR1 ARE MULTIFUNCTIONAL ONCOLOGY TARGETS ON THEIR OWN RIGHT

TBL1 and TBLR1 are also mutated and upregulated in multiple types of can­cers, including breast, lung, pancreatic, and colon cancers, and their overexpres­sion is often associated with poor progno­sis and metastasis. These and other accumulating data provide increasing ev­idence that TBL1/TBLR1 are promising on­cology targets for therapeutic intervention.

TBL1/TBLR1 are intrinsic components of the SMRT/NCoR co-repressor com­plexes and act as exchange factors of corepressors for coactivators to control the transcriptional switch between gene re­pression and gene activation. Transcrip­tional activation mediated by liganded nuclear hormone receptors (NHRs) and other regulated transcription factors (TFs) requires the release of co-repressors fol­lowed by the recruitment of a series of coactivator complexes harboring specific enzymatic activities. A recent study has shown that both TBL1/TBLR1 are required for transcriptional activation by estrogen receptor (ER), androgen receptor (AR), thy­roid hormone receptor (THR), and peroxi­some proliferator-activated receptor (PPAR).

TBLR1 is also required for the activa­tion by RAR (retinoid acid receptor) and AP-1 (activator protein-1). TBL1/TBLR1 both serve as adaptors for the recruitment of the ubiquitin conjugating/19S protea­some complex to the promoter in a ligand-dependent fashion, mediating the exchange of corepressors for coactivators. The functions and the specificity of TBLR1 and TBL1 are regulated by signaling spe­cific phosphorylation events at target gene promoters.

Additionally, TBL1/TBLR1 regulates the NF-κB pathway, an important signal­ing pathway that has been implicated in autoimmunity, chronic inflammation and cancer. A recent study has shown that both TBL1 and TBLR1 are required for the NF-κB mediated activation on canonical sites. TBL1 is critical for the recruitment of p65 to NF-κB target genes to mediate activa­tion. NF-κB transcription requires IKKalpha to phosphorylate SMRT on chromatin, stimulating the exchange of co-repressor for coactivator complexes. The recruitment of TBL1/TBLR1 to the target promoters co­incides with SMRT phosphorylation. More­over, TBLR1 can directly interact with BCL-3 and is involved in BCL-3 degrada­tion through a GSK3 independent path­way. These data suggest that TBL1/TBLR1 plays a critical role in NF-κB mediated ac­tivation through both canonical and non-canonical pathways.

TBL1 has also been recently shown to regulate the prost-transcriptional stability of critical oncoproteins through modulat­ing the activity of the Skp1-Cul1-F-box (SCF) complex in diffuse large B cell lym­phoma (DLBCL). These data revealed an additional post-transcriptional oncogenic pathway mediated by TBL1 besides its transcriptional regulatory functions as a nuclear exchange factor and coactivator.

TBL1 interacts with a portion of the β-catenin armadillo domain (residues 133-467) at its N-terminus (residues 1-142). Protein structural studies have identified a hydrophobic pocket in this region that is involved in binding to β-catenin in addi­tion to other proteins like the members of the NCoR complex and NFkB family.

This defined interaction pocket in TBL1/R1 provides a structural basis for small molecule inhibitor binding designed to target disruption of these protein-pro­tein interactions. TBL1/β-catenin interac­tion requires TBL1 to be SUMOylated in response to activated Wnt/ β-catenin sig­naling, while the interactions with p65 and NcoR are regulated by specific phospho­rylation events. Such distinction in protein modifications and subsequent conforma­tional changes may provide a basis for de­signing small molecule inhibitors that are selective for different pathways regulated by TBL1.

Tegavivint (BC2059, Iterion Thera­peutics) is a first-in-class small molecule inhibitor of TBL1 and the only TBL1 in­hibitor reported to date. Tegavivint was discovered through cell-based screening strategy for inhibition of nuclear β-catenin activity and subsequently shown to target the TBL1/R1 interaction with β-catenin. Tegavivint has been shown to potently in­hibit nuclear β-catenin-dependent signal­ing through binding to TBL1, thus disrupting the TBL1/β-catenin association.

Tegavivint is currently being evaluated in a first-in-human Phase 1/2 clinical study in patients with progressive desmoid tu­mors. Significantly, desmoid tumors are al­most entirely driven by CTNNB1 mutations that lead to oncogenic activation of the Wnt/β-catenin signaling pathway; addi­tional mutations in these tumors are not common.

Consistent with preclinical data, accu­mulating clinical data of Tegavivint demonstrate a better safety profile com­pared with previous Wnt inhibitors tested in cancer patients. Early signs of antitumor efficacy have also been observed. The lack of GI, bone, and hematopoietic toxicities and skin reactions that were frequently as­sociated with upstream Wnt/β-catenin pathway inhibitors supports the targeting TBL1 as a safe and effective novel ap­proach to drugging the Wnt/β-catenin pathway.

Previous attempts to drug the Wnt/β-catenin pathway have been hampered by toxicity and/or lack of potency due to β-catenin’s multiple cellular roles and com­plexity of the signaling cascade. Targeting TBL1/TBLR1 enables specific silencing of oncogenic Wnt target gene expression without affecting other necessary cellular functions that are disrupted when targeting higher up the Wnt pathway. This avoids toxicity issues common to other drugs in this pathway. Tegavivint’s ability to disrupt TBL1/β-catenin interaction makes it unique among nuclear β-catenin inhibitors and clinical data has confirmed that its novel and differentiated mechanism of ac­tion is a potentially safe and effective ap­proach to drugging the Wnt/β-catenin pathway. 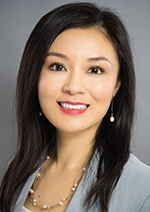 Dr. Ruolan Han is the Director, Translational Research at Iterion Therapeutics, a privately held, Houston-based clinical-stage biotechnology company developing novel cancer therapeutics. Dr. Han earned her BS in Genetics from Fudan University, Shanghai, China, and her PhD in Pharmacology from the University of Rochester. She has more than 15 years of combined experience in research and development of cancer therapeutics, including broad-based training in the field of cancer/stem cell biology and neuroscience.