Most cancer drugs are designed to shrink tumors by killing tumor cells; however, these drugs do not affect tumor cells in isolation. Cancer drugs affect both cancer and healthy cells throughout the body, resulting in off-target adverse toxic effects on the healthy, normal cells. These off-target toxic effects can limit the efficacy of cancer drugs, as side effects caused by off-target drug activity can limit the dose of a drug administered or prevent a drug from being combined with other cancer therapeutics.

This conundrum applies to treatments such as highly potent chemotherapies, including topoisomerase I inhibitors and maytansines. Such treatments are known to be highly effective in killing cancer cells, but toxicities to normal tissue preclude these drugs from being administered systemically. To date, these potent chemotherapies have been targeted to tumors by antibodies, creating a class of therapeutics called antibody drug conjugates (ADCs). ADCs can only be used against tumors that overexpress specific antigens, limiting the number of patients who can benefit. In addition, the chemotherapies, or “payloads” are released extracellularly, which can result in off- target toxicities. The relatively large size of the ADCs also limits tumor penetration. 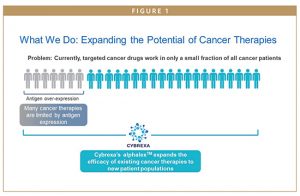 In addition, some classes of therapies have been unable to fully unlock their potential because they cannot be combined with DNA-damaging chemotherapies, like topoisomerase I inhibitors. PARP inhibitors, a type of DNA Damage Response (DDR) Inhibitors, are one such class of therapies. Four PARP inhibitors are currently approved by the FDA and EMA. Like other DDR inhibitors, PARP inhibitors require inherent errors in cancer cells’ DNA – caused by either genetic mutations (or external factors like chemotherapy or radiation therapy that cause damage to tumor cell DNA). Only 15% to 40% of all cancer patients contain a DDR mutation. Therefore, PARP inhibitors are currently approved only as monotherapies in patients with BRCA mutations or following a response to platinum-based chemotherapy. 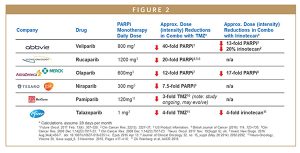 It has been known for decades that the area in and around all tumor cells has a lower pH relative to healthy tissue. Although previously explored, this phenomenon has not been successfully leveraged as part of drug development. Cybrexa Therapeutics is currently developing a unique platform technology called alphalex that represents the first technology that has successfully used pH differential to target cancer drugs to tumor cells in animal models, while sparing healthy tissue.

alphalex is the combination of a pHsensitive pHLIP® peptide, linker, and anticancer agent. pHLIP peptides are a family of pH-Low Insertion Peptides that target acidic cell surfaces. pHLIP was developed at Yale University and the University of Rhode Island, and is exclusively licensed to pHLIP, Inc. The complex undergoes a chemical reaction in the low-pH tumor microenvironment: the peptide forms an alpha helix and translocates across the cell membrane to release and deposit anti-cancer agents into cancerous tumor cells. The anti-cancer agents remain inactive while they are part of the conjugate and only become active when they are released into the tumor cell. The platform is exquisitely sensitive to pH differential between tumors and healthy tissue. In addition, alphalex has a relatively simple and scalable manufacturing process.

This technology allows for the selective, antigen-independent, intracellular delivery of anti-cancer agents. The antigen independence of alphalex is a major advantage compared to ADCs, like ENHERTU® (fam-trastuzumab deruxtecan-nxki), which contains a potent topoisomerase I payload and is specific to HER2-expressing tumors. ENHERTU was licensed by AstraZeneca in 2019 for a total deal value of $6.9 billion.

alphalex can be applied to a broad range of small molecule drugs, and its potential lies in enabling an enhanced therapeutic index. This allows both highly toxic monotherapies and combinations of therapies with known synergistic efficacy and toxicity to be administered to patients at effective doses.

By leveraging existing anti-cancer agents with established clinical evidence, Cybrexa is moving programs into the clinic quickly. This also provides us with a reduced risk profile for development because new molecules are not being designed or developed from scratch. Our lead program, CBX-12 (alphalex-exatecan), leverages a highly potent topoisomerase I inhibitor payload, similar to ENHERTU’s payload. Unlike ENHERTU, CBX-12 is not dependent on HER2 overexpression. CBX-12 was selected based on its strong efficacy and solid safety profile in preclinical models, which we look forward to publishing later this year. CBX-12 may have potential synergy with immuno-oncology drugs, such as PD-1s as well as in combination with DDR inhibitors, including PARP inhibitors. CBX-12 could enable the combination of PARP inhibitors with DNA-damaging chemotherapy to effectively kill cancer cells independent of mutation status and without extreme bone marrow toxicity.

Our focus is initially on patients with few or no treatment options, where preclinical and clinical data has shown topoisomerase I inhibitors may have particular efficacy. This includes colorectal, ovarian, breast, and small cell lung cancer. Cybrexa plans to advance CBX-12 into the clinic in the first half of 2021. The Cybrexa team is confident that the compound could yield clinical efficacy and safety data by 2022.

BEYOND TOPOISOMERASE I INHIBITORS: EXPANDING TO NEW FRONTIERS

CBX-12 is the first of several programs we plan to advance to the clinic. Cybrexa’s pipeline includes programs with other established toxins such as DM4, in which administration of the anti-cancer agent alone is too toxic to be tolerated, and a multitargeted DDR inhibitor-alphalex conjugate. Given the potential of alphalex, we are continuing to evaluate other applications for the platform and expect to announce our second lead program later this year.

Cybrexa is a privately held biotechnology company dedicated to developing next-generation tumor-targeted cancer therapies using its alphalex platform. The company’s lead candidate, CBX-12, an alphalex-exatecan conjugate, is expected to enter Phase I in 2021 in advanced solid tumors. Cybrexa also has other preclinical toxin conjugate programs as well as synthetic lethality programs. Cybrexa was founded by physician-scientists and has an experienced management team that has built numerous successful life sciences companies. 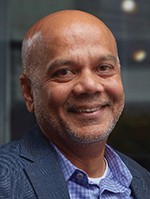 Dr. Vishwas Paralkar is Chief Scientific Officer of Cybrexa Therapeutics. He brings more than 23 years of executive experience in addition to extensive drug discovery and research experience to his role. He most recently served as Chief Scientific Officer of Karos Pharmaceuticals, where he was hired as the first employee and served as the CSO until its acquisition in August 2017. Prior to joining Karos, he was a Senior Director at Pfizer, which he joined in 1995 and left to join Karos in June 2010. Before that, he was a Visiting Research Fellow at the National Institutes of Health in Bethesda, MD. He earned his PhD in Cell Biology/Biochemistry from Howard University.