The need for improved drug delivery systems for pediatrics is compelling, given the special formulation needs, safety considerations, and challenges of oral dosing within this patient population. Formulators must factor in a range of special considerations for pediatric patients, in addition to the challenges in formulating medicines for all patient groups, APIs with low aqueous solubility or bitter taste and precise target product profiles for specific drug delivery and safety.1,2 Pediatric patients often have different physical and metabolic needs from adults, and particular difficulty in swallowing conventional solid oral dosage forms, which can result in patient compliance issues.3 They also typically require smaller doses of the drug and require more dose flexibility due to a wide range in body weight. Additionally, children are more resistant than adults to palatability issues (eg, objectionable characteristics in terms of taste, smell, or mouthfeel such as slight grittiness). Because pediatric formulations must often be given by adults in constrained situations (eg, around school or daycare schedules), formulations are needed that are easy to administer, while providing for flexible dosing requirements, accommodating complicated drug delivery profiles, and ensuring patient safety and acceptance.4

Lipid multiparticulates (LMPs) in particular offer an attractive formulation option for pediatric use. This platform technology has demonstrated efficacy, combining the flexibility and safety aspects of oral multiparticulates, the advantages of lipidic delivery systems, and compatibility with a wide range of convenient delivery systems.5 LMPs are made by a solvent-free melt-spray-congeal (MSC) process using precedented, lipid-based excipients with good safety profiles. Because LMPs are solid and lipid-based, no preservatives are required to prevent microbial growth. API dissolution rate is controlled by varying excipient composition, making both immediate- and controlled-release formulations achievable.

LMPs were prepared using an MSC process and characterized after annealing at high temperature and relative humidity (RH). Results showed that annealing could be used to accelerate kinetic transitions of the lipid matrix from high-energy forms (present after manufacture) to lower-energy polymorphs that are thermodynamically more stable. This transition should prevent changes in the dissolution profile of the LMPs after manufacture.

This drug delivery platform is based on LMPs manufactured using a proprietary MSC process. In this process, a feed of molten excipients dispersed with crystalline API is prepared and then fed to a rotary spinning-disk atomizer in either a continuous or batch process. The atomizer creates droplets that are then rapidly congealed in a cooling chamber, forming solid LMPs. The LMPs are collected, and for controlled-release formulations, the LMPs are annealed at high temperature and humidity. Immediate-release LMPs are not annealed. The final drug product consists of spherical, smooth lipidic-wax-matrix LMPs, typically 50 μm to 300 μm in diameter, with the API homogenously dispersed throughout.6

A primary strength of the MSC process is the flexibility it offers in the production of LMPs with a variety of release rates. Release rates can be tuned by altering the ratio of dissolution enhancer to lipid matrix or using lipids with different hydrophobicities.2,6

Immediate-release or controlled-release profiles can be achieved without the need for rate-controlling coatings. Modified-release coatings – to achieve taste-masking, enteric protection, or delayed release, for example – can be applied using a standard fluid bed coater to meet the desired release profile. Either coated or uncoated, LMPs are well- suited for use in numerous types of dosage forms, including novel capsules that can be snapped open to sprinkle the contents, sachets, orally disintegrating tablets (ODTs), and liquids, depending on the target product profile.

The MSC technology is well-characterized, and critical process parameters have been identified and characterized for each process step, allowing precise control over product characteristics and performance. Rapid congealing promotes excellent encapsulation efficiency and produces easy-to-swallow multiparticulates that have an acceptable mouthfeel for age-appropriate dosing. The technology has established market precedence – for example, Zmax®, a single-dose antibiotic, is marketed by Pfizer Inc.7

The nature of the excipients used in controlled-release LMPs warrant annealing. The majority of the LMPs consist of a lipidic wax matrix, and the release profile is adjusted using a dissolution enhancer (ie, a pore former). As the molten feed containing the dispersed crystalline API is atomized by the rotating disk, drops form, which rapidly congeal, encapsulating the crystalline drug in a mixed-phase form of partially crystalline excipients. These excipients are in a high-energy, less stable form because of the rapid congealing and, thus, are thermodynamically driven to change form. Over time, the lipidic wax matrix and dissolution enhancer are susceptible to phase separation and recrystallization of different polymorphs, which can alter the dissolution profile of the API.

Second, the lipid matrix, glyceryl dibehenate (GDB), almost always exists as a mixture of α (high-energy) and β (denser, more stable) polymorphs. In the rapidly congealed LMP, the α polymorph is predominant. Upon annealing, this polymorph is transformed to the thermodynamically more stable β polymorph. This leads to densification of the lipid matrix, increasing the internal free volume or porosity of the matrix. These two mechanisms cumulatively reduce the effective diffusion path length of the API. These concepts are shown in Figure 1. Drug is released from LMPs when they are wetted with water, hydrating the dissolution enhancer and wetting the drug crystals. The dissolution enhancer and drug then dissolve and diffuse out of the LMPs.8 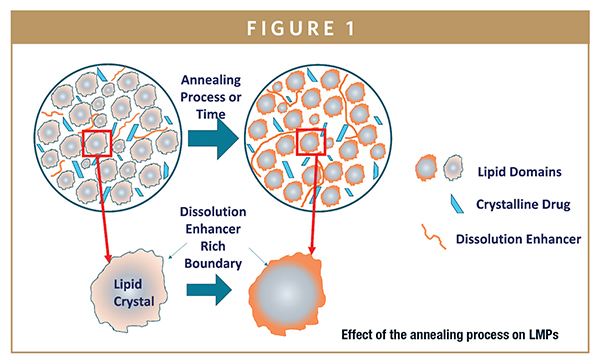 The goal of this study was to investigate how the state and morphology of the lipidic wax matrix changes upon annealing and to evaluate the effect of those changes on the resulting dissolution rate. In-depth knowledge of the annealing process provides an opportunity to minimize the stability risk associated with alteration of the target release rate in LMPs after their manufacture.

Placebo LMPs and thin films were composed of a lipidic wax matrix (ie, glyceryl dibehenate [GDB], [Compritol® 888 ATO]) and a dissolution enhancer (ie, poloxamer 407, [Kolliphor® P407]) at three poloxamer loadings: 5%, 7%, and 10%. Control LMPs with 100% GDB were also manufactured for physical characterization. The LMPs were prepared using the MSC process by introducing a melt of the components onto a spinning disk. The LMPs were sieved to a particle size of 150 μm to 350 μm. Films of GDB and poloxamer labeled with Texas Red dye were fabricated by hot-melt casting. The LMPs and the films were annealed at 50°C/75% RH for up to 4 weeks and characterized before and after annealing using the following techniques: (1) confocal laser microscopy; (2) scanning electron microscopy (SEM); (3) Fourier-transform infrared spectroscopy (FTIR); (4) modulated differential scanning calorimetry (mDSC); and (5) dissolution testing.

As shown in Figure 2, the confocal images of films showed differences in the internal arrangement of poloxamer domains, with much more phase separation and excipient redistribution evident after annealing. This information was important because drug transport occurs via the porous network of the LMPs.8 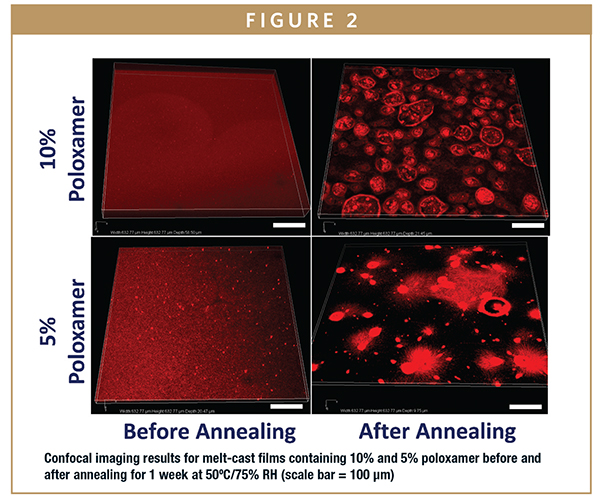 The goal of these tests was to determine if changes in the proportions of α and β polymorphs of GDB occurred after annealing. LMPs consisting of 100% GDB or containing 10% poloxamer were tested by FTIR before and after annealing for 4 weeks. As Figure 3 shows, the proportion of β polymorph increased with (a) annealing time and (b) with addition of the poloxamer to the formulation.8 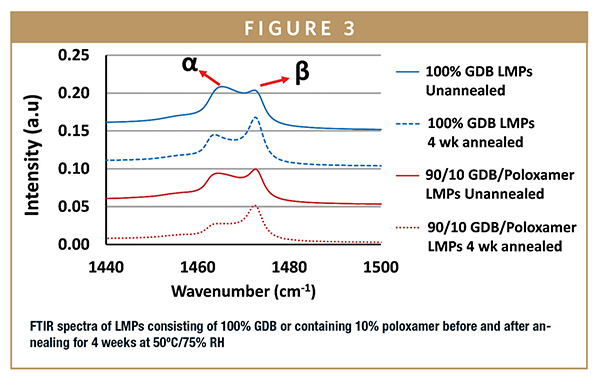 The goal of these tests was to determine if changes in the thermal characteristics of the LMPs occurred after annealing. LMPs were tested for melting events and the melting-peak characteristics were analyzed. Results showed the enthalpy of fusion of the lipid peak increased with annealing time and that the lipid melt peak widened and increased with annealing time. The increase in melt enthalpy is attributed to formation of the more-stable β polymorph, and peak widening is attributed to existence of multiple polymorphs of GDB (data not shown). 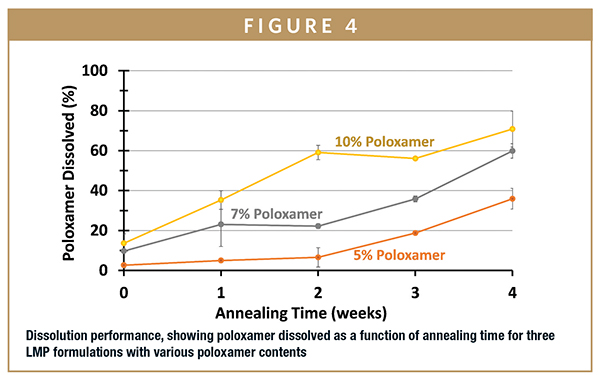 The results summarizing the physical changes that occur with LMP annealing and their effect on dissolution performance are illustrated in Figure 5.8 These results show that annealing can be used to accelerate kinetic transitions from high-energy polymorphs (present after LMP manufacture) to lower-energy polymorphs that are thermodynamically more stable. This transition should prevent changes in the dissolution profile of the LMPs during storage. Further, the studies showed adjustable drug release can be achieved by varying the ratio of dissolution enhancer to lipid matrix. 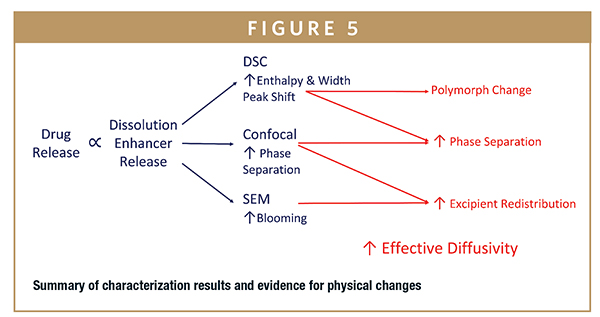 This work investigated placebo LMPs (ie, with no API present in the formulation). In formulations with API, the mechanism of annealing is similar, but the rate of annealing varies. In one example with LMPs with low drug loadings, the drug dissolution rate and the enthalpy of fusion of the lipid melt peak stabilized after annealing for 2 weeks and did not alter upon further annealing (data not shown). Another example of LMPs with moderate to high drug loadings showed shorter annealing times of just a few days (data not shown). We hypothesize that the API, which remains crystalline through the manufacturing process, provides nucleation sites for lipid matrix crystallization, affecting the dissolution enhancer and lipid matrix organization and form. However, the annealing mechanism remains the same. These limited studies have advanced our understanding of the annealing process and its effects on physical and dissolution properties of LMPs and should prove invaluable in choosing the best annealing conditions for future controlled-release LMP formulations.

In summary, LMPs are a promising technology for specialized formulations, including patient-centric (pediatric and geriatric) drugs that require adjustable-release characteristics. Drug dissolution from LMPs can be modified by varying the loading of dissolution enhancer. Optimal annealing conditions can be chosen to minimize any changes in LMP dissolution rate during storage. Annealing studies can thus be used to mitigate the long-term stability risks of deviating from the target product profile.

We would like to acknowledge Cody Prather, Warren Miller, Amanda Pluntze, Chris Craig, Kathryn Pugh, Matt Shaffer, and Jonathan Cape of Lonza Pharma & Biotech for their work on this. u 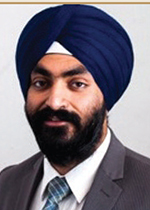 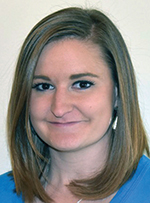 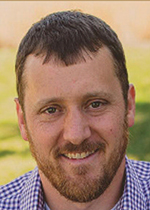