Biocompatible and biodegradable polymers are frequently used in the pharma industry to encapsulate active pharmaceutical ingredients (APIs) and then degrade in the body over time, releasing the drug in a controlled way. However, the speed of drug delivery and release is affected by the size and shape of the particle, and strict control of these parameters is essential. Many companies are now taking a microfluidics approach to drug encapsulation, generating reproducible monodisperse particles and the advantages they offer. The following discusses the use of polymer microparticles for pharmaceutical applications, including specific examples of polylactic-co-glycolic acid (PLGA) encapsulation.

Improving the delivery and release of drugs in the body has great potential to advance the treatment of a number of diseases. A key development has been the creation of therapies that can be delivered without systemic circulation, instead targeting localized areas. As a consequence, biodegradable polymers, such as PLGA, have gained in popularity in a number of biomedical areas, playing an important role in improving therapeutic treatments by enabling the encapsulation of APIs – such as drugs, antibiotics, growth factors, anti-inflammatories, peptides and proteins, nucleic acids, and radiotherapy agents – that can be delivered and released in a controlled way in the body. Encapsulation essentially offers protection to an API from enzymatic or acidic degradation in the stomach, improves diffusion of the drug across the digestive tract, and offers a way of introducing hydrophobic molecules into the body.

Traditionally, the production of these types of particles has been conducted under batch conditions, but reproducibility is key, and this is difficult to achieve with these methods as they often produce a range of particle sizes. It is also simply not efficient to produce extremely small yields for single patients; a high number would be wasted and, in some cases (particularly those where radioactive therapeutics form the API), this leads to issues with disposal of hazardous materials. Instead, a microfluidic approach enables the continuous reproducible production of encapsulated therapeutics in uniformly-sized particles, created on demand in small numbers and tailored to the needs of each individual patient. These miniaturized reactions only require small amounts of reagents and drugs – which are often very expensive and in short supply – and the production volume can be easily scaled-up commercially using multiple chips in parallel.

Getting the therapeutic substance into the organic solvent can also prove difficult, as many APIs don’t dissolve in organic solvents. Producing a powdered form of the therapeutic and suspending it in the solution is one method to overcome this (Figure 1), as is making a multiple emulsion (Figure 2), in which the drug is encapsulated within a water droplet inside the polymer outer droplet. Both of these methods can be challenging in batch processing, but are easily achieved using microfluidics, which offers more precise control over processing. It allows individual parameters, such as flow rates, polymer concentrations and ratios, drug load, solvent, and speed of production to be altered and fine-tuned, optimizing the reaction. The result is reproducible and monodisperse particles that release drugs in a controlled way, ensuring the correct dose is delivered within the therapeutic window, to maximum effect, and without unwanted side effects or toxicity. These benefits have led microfluidics to grow in popularity over recent years, not only in drug delivery, but in a range of applications. 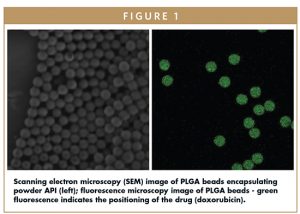 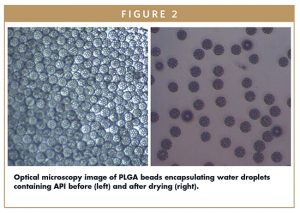 THE USE OF PLGA

PLGA is already a commonly used biodegradable polymer approved by the FDA for the encapsulation of APIs and extensively used in a number of disease areas, from neurodegenerative and cardiovascular diseases to oncology, inflammatory disorders, and wound and bone healing. This is largely due to its biocompatibility, biodegradability, and controllable properties that can be modified to affect drug delivery and release. For instance, the polymer has been successfully applied to encapsulating radioisotopes for drug delivery, allowing radiation to be directly targeted at the exact tumor site. Optimizing the size and shape of the particles ensures the correct therapeutic dose and timely delivery – especially important when using elements with a short half-life.

To perform drug encapsulation, a solution of PLGA in an organic solvent is mixed with the chosen API, and the polymer is then solidified into a particle (Figure 3). However, the efficiency of entrapment and release is multi-layered and depends on the physicochemical properties of both the drug and the particle. This includes respective hydrophilicity and hydrophobicity, and particle size which, as it decreases, increases the surface-to-volume ratio, leading to quicker drug release. Balancing all of these factors is crucial to generating particles tailored to the needs of your patient. 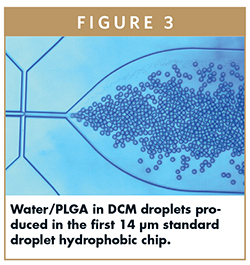 A perfect example of this approach in action can be seen at the North West Centre for Advanced Drug Delivery (NoWCADD), based at the University of Manchester, where researchers are formulating PLGA drug delivery systems, using microfluidics to produce nanoparticles capable of a sustained drug release in oncology applications. The current focus is studying the use of commonly-used cancer drugs, such as SN-38, doxorubicin, and gemcitabine, to validate the system, before translating the approach for new drugs in the future. The aim of such a delivery system is to accumulate the API at the tumor site, localizing the therapeutic effect and controlling and sustaining drug release over time. This will minimize treatment administration, reduce side-effects, and increase efficiency. Additionally, NoWCADD is studying co-encapsulation in liposomes; their unique composition allows hydrophilic molecules to be loaded into the aqueous core, while lipophilic drugs can be incorporated into the lipid bi-layer. Often, cholesterol is also added as a supplementary component in the liposome membrane, as it increases thermal stability and reduces membrane permeability, promoting encapsulation and drug retention until release. This project is targeting breast cancer, as chemotherapy often uses combinations of drugs with different properties. PLGA conjugates well to most of the drug candidates regardless, and thus is ideal for this type of application.

Taking a microfluidics approach has enabled the researchers in Manchester to create and prepare different sizes of nanoparticles and control the encapsulation efficiency. It has also eliminated the batch-to-batch variability of production and improved the stability of the particles produced, with researchers able to quickly change parameters to optimize the formulation.

Dr. Annalisa Tirella, lecturer at the University of Manchester, said “The microfluidics system we are using is easy to use and robust, allows us to make both nano- and microparticle drug delivery systems, and has the advantage that we can use custom chips to optimize the performance of our processes. It is very flexible too; we can quickly and easily change parameters to test a prototype reaction using just a few microliters of a preparation, minimizing the costs involved. Importantly, the system gives us good control over our processes, eliminating batch-to-batch variation, which means that we can consistently and reliably produce nanoparticles. That’s the really big benefit of the system.”

Elsewhere, the School of Pharmacy at the University of Nottingham is also using PLGA to improve drug encapsulation and therapeutic delivery. This group is focusing on optimizing microfluidic reaction conditions to produce fluorescent PLGA particles. These particles will effectively act as biosensors that detect and monitor specific analytes in the body, and release biological medicines according to changes in the biochemical environment. A microfluidics approach allows strict control of both particle shape and size, along with drug release parameters, and has allowed the team to change one parameter at a time to alter the size, degradability, or profile of the particle. This is essential to ensure the correct dose and achieve maximum therapeutic benefit, without unwanted side effects.

Dr. Veeren Chauhan, Research Fellow at Nottingham, explained “The beauty of microfluidics is that, as the reactions are miniaturized, we only need small amounts of reagents and drugs, which are often quite expensive. It is also quite tunable, allowing us to selectively change individual parameters, such as flow rates, polymer concentrations and ratios, drug load, solvents, and the speed of production.” Using this method, researchers have been able to produce a range of diverse PLGA particles in a monodispersed format to study the efficiency of entrapment, as well as drug release.

The use of microfluidics is proving ideal for the production of PLGA particles for drug encapsulation and delivery, providing precise control that is vital for the efficient and effective production of uniform particles. Alterations to the particle can then be used to different effect, such as improving solubility or changing the target site. While there are already commercially available products, continuous improvements in delivery nanosystems are opening up a range of translatable applications in other areas. An example of this is PLGA nanostructures that combine drug delivery, molecular imaging, and real-time monitoring of therapeutic response, which are paving the way for nanomedicine in the future. The use of PLGA and microfluidics is showing tremendous promise in drug delivery, and it will be exciting to see how this technology continues to grow. 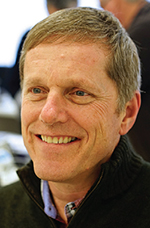 Richard Gray founded Syrris Ltd with Mark Gilligan in 2001, moving to the US in 2004 to manage the Group’s US subsidiaries. Mr. Gray’s background includes fast-track product and process development in consumer, medical device, and industrial sectors. Before Syrris, he was a General Manager in Mettler Toledo’s Automated Chemistry Group, starting up and leading a 50-strong team in design and manufacturing of automated drug synthesis equipment. He worked in technical consulting at The Technology Partnership and PA Technology, and in helicopter rotor design at Westland Helicopters. He earned his MA in Engineering from Cambridge University and has a Diploma in Management Studies.