Metered dose inhalers (MDIs) are the primary therapy for treating pulmonary diseases, such as asthma and chronic obstructive pulmonary disease. Simple, inexpensive, portable, easy-to-use, and suitable for the delivery of almost all relevant drugs, MDIs actively deliver drug particles to a patient’s lung using a propellant. This active delivery mechanism underpins the assumption that the size of particles delivered, and consequently the received dose, is unaffected by the breathing maneuver of the patient, an assumption that has led to the adoption of relatively simple in vitro test protocols, compared with those used for alternative inhaled products, such as nebulizers or dry powder inhalers.

In this article, we present experimental data that shows how certain modifications to the Pharmacopoeial test methods used for MDIs may result in data that is more indicative of real-life performance, providing insight that can be used to enhance drug delivery characteristics. A particular focus is test flow rate. The inhalation strength of patients can vary considerably depending on whether a treatment is preventative, or for the use of acute symptoms. The data presented here suggests that for certain formulations, changes to sampling flow rate can have a significant effect on delivered particle size and consequently the therapeutic dose received by the patient.

AN INTRODUCTION TO MDIS

An MDI contains active ingredients formulated in solution or suspension with excipients, solvents, and a suitable propellant.1 Upon actuation, the metering chamber within the MDI becomes closed to the formulation reservoir and opens to the atmosphere. This results in rapid expansion of the propellant-based formulation, which as a result, is atomized through the actuator orifice with some force to create a respirable cloud of droplets/particles.2,3

Patient Instruction Leaflets (PILs) detailing how to use an MDI typically advise the patient to breathe slowly and deeply, as they synchronize actuation with inhalation, but clearly this can result in the application of a wide range of breathing profiles depending on the physiology, strength, and technique of the individual. The active atomization mechanism that underpins drug delivery with an MDI has led to the assumption that the size of the emitted particles is unaffected by this potential variability in applied breathing profile. As a result the in vitro tests applied to define performance are not specified to take account of the possible influence of inhalation flow rate.

Delivered dose and particle size are both Critical Quality Attributes (CQAs) for MDIs, meaning that they have a defining impact on clinical efficacy. Delivered dose is the total amount of drug emitted from the drug device, and hence available to the user, while particle size influences in vivo deposition behavior and consequently the proportion of the delivered dose that will enter the body via the lung. Both the European Pharmacopoeia (Ph Eur) and the United States Pharmacopoeia (USP) include test procedures for measuring these metrics.4

Cascade impaction is the technique specified for the measurement of particle size, or more specifically, aerodynamic particle size distribution (APSD) (Ph Eur Method Chapter 2.9.18 and USP Test Chapter <601>) since multistage cascade impactor separate samples on the basis of difference in particle inertia.4 Penetration to the lung is generally considered to require a particle size of less than 5 microns; a figure that is used to define the metric fine particle dose (FPD) – the dose that on the basis of size would be expected to be delivered to the lung.5 However, finer particles in the range of 2 to 3 microns or below more successfully reach the deep lung. The following impactors appear in both the Ph Eur and USP: Andersen Cascade Impactor (ACI), Next Generation Impactor (NGI), and Multi-Stage Liquid Impinger (MSLI). In each case, sample sizes fractionated by the impactor are collected and analyzed to give an APSD specifically for the active.

To deliver precise measurements, a cascade impactor must operate at a constant flow rate that raises the question of what flow rate to select. A standard test rate of 28.3 L/min (1 SCFM) is specified by the Pharmacopoeias, and this may be argued to mimic slow inspiration through the device. However, the provenance of this figure may stem from the fact that early ACIs; the first instrument used for this analysis were only calibrated at 28.3 L/min, and there is little robust evidence to support its use.6 Recent experimental studies have suggested that MDI drug delivery characteristics may be dependent upon sampling or inhalation flow rate, suggesting that testing at flow rates other than 28.3 L/min is a worthwhile strategy for more comprehensive exploration of the performance of the product.

In the following experimental studies the effect of flow rate on delivered dose and APSD was systematically investigated for formulations of different composition. Fostair MDIs (Chiesi Farmaceutici, Parma) were used for all tests, containing an ethanol/HFA 134a formulation, and the APIs Beclomethasone Dipropionate (BDP) and Formoterol Fumarate (FF). Three MDIs were evaluated. Testing practice, drug recovery, and data processing were all performed in accordance with standard practice (for further details refer to reference 7).

Results measured using Configurations 1, 2, and 3 indicated that the addition of a spacer (Configuration 3) had the greatest impact on dose characteristics. With the spacer in place, the amount of drug deposition in the IP was considerably reduced, as was the delivered dose. However, there was a concomitant 20 μg increase in fine particle dose (FPD); despite API deposition to interior surfaces of the VHC.

Drug deposition data for Configurations 4 and 5 also showed a significant decrease (p < 0.001) in USP/Ph Eur IP deposition, relative to Configurations 1 and 2. Additionally, increasing the sampling flow rate from 28.3 L/min to 56.6 L/min increased FPD from 33 ± 2 μg to 55 ± 3 μg. However, no significant further rise in FPD was observed when the sampling flow rate was increased to 86.9 L/min.

A rationalization for these results can be proposed with reference to the potentially incomplete evaporation mechanisms that take place prior to droplet deposition within the ACI. The added time for ethanol evaporation provided by Configurations 2 and 3 may be responsible for the reduction in the mass deposited on the upper stages impactor, compared with Configuration 1, although this had little effect on FPD or IP deposition, which was closely comparable for Configurations 1 and 2. The location of the spacer (Configuration 3) meant that it not only provided more residence time for evaporation but also reduced the speed of the plume prior to its entry into the IP, thereby reducing the ballistic component of the aerosol plume and the amount of IP deposition.

With respect to flow rate, for an MDI with a fixed mass discharge rate, increasing mouthpiece sampling flow rate provides a greater volume of air relative to the volume of formulation after propellant flashing has taken place. Hence, enhanced ethanol evaporation can be anticipated at these patient-relevant mouthpiece flow rates, leading to reduced particle deposition on the ACI stages with associated aerodynamic diameters > 5 μm, as observed.

The effect of mouthpiece sampling flow rate on Mass Median Aerodynamic Diameter (MMAD) was marginal (Figure 2A & 2B); however, higher flowrate sampling resulted in a narrower APSD, and a shift to finer sizes was obtained compared to Configuration 1. The Fostair product is licensed for use with the Aerochamber Plus VHC, similar to the set-up used in Configuration 3 to reduce IP deposition and patient oropharyngeal drug deposition, and the advantages of using VHCs are well documented. The results presented here suggest that fast inhalation through a low resistance MDI such as this improves the drug delivery obtained with solution-based MDIs and may result in similar performance to that observed with a spacer.

ASSESSING THE IMPACT OF FORMULATION PROPERTIES Results for Configuration 1 confirmed that key aerosol performance parameters were closely equivalent for the two different formulations (Table 2). Adding a spacer caused a substantial increase in fine particle fraction (%FPF) for both formulations but a marked decrease in delivered dose. The delivered FPD for Formulation A remained relatively similar, but with Formulation B, FPD increased from 71 ± 3 μg to 100 ± 13 μm with addition of the spacer. Additionally, a greater mass of BDP was deposited on the spacer from Formulation A than Formulation B. Increasing the sampling flow rate to 84.9 L/min (Configuration 5), further increased the FPDs of both formulations. HFA 134a has a higher vapor pressure than HFA 227, and consequently, the pack pressure of Formulation B was greater than that of Formulation A. Higher pack pressures are associated with the production of finer sprays at the sampling flow rate of 28.3 L/min, though no such effect was observed in the study. Rather particle size reduced with use of the spacer and at high sampling rates.

The initial flashing of a formulation causes rapid cooling at the orifice exit, which can inhibit atomization if the temperature falls below the boiling point of the propellant. This effect could potentially cause a reduced FPD and is more likely to affect formulations containing HFA 227, which has a higher boiling point than HFA 134a. However, an increase in the air flow rate past the orifice may enhance movement away from the orifice into a warmer environment offsetting this effect. This would rationalize the higher FPDs observed with Configuration 5 relative to Configuration 1.

In vitro MDI characterization is conventionally performed at 28.3 L/min; far lower than typical patient inhalation flow rates, which may reach 90 L/min. These investigations on the impact of sampling flow rate suggest that such practice may result in the measurement of FPDs that are low relative to what is likely to occur during use. A survey of the PILs of various marketed products found that patients are instructed to breathe in slowly and deeply or steadily and deeply when using their MDI. The findings of these studies challenge this advice because they suggest that high flow rates at the mouthpiece bring the performance of a solution MDI up to that observed when using a spacer or VHC.

More broadly, the findings reported here highlight the value of a more robust scoping of product performance than is suggested by standard QC tests. By refining test practice to include evaluation of the effect of different flow rates, or indeed more realistic induction ports, such as the Alberta Idealised Throat (Copley Scientific), researchers can narrow the gap between in vitro measurements and clinical performance. Ultimately, these understanding gains will help with the advancement of more efficient technology that consistently delivers patient benefit. 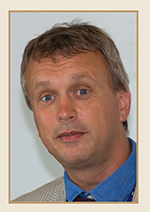 Dr. David A. Lewis is Head of Laboratory at Chiesi’s research centre in Chippenham, UK. He earned his BSc in Physics (1989) and his MSc and PhD in Aerosol Science (1990 & 1994), from Essex University, England. Dr. Lewis joined the Centre for Drug Formulation Studies at Bath University, England, in May 1996 to lead a start-up HFA program sponsored by Chiesi Farmaceutici. The resultant successful development of HFA solution formulations lead to a rapid expansion of his group which transferred to Vectura in 1999 as a result of CDFS spin-out by the University of Bath. He joined Chiesi Limited in 2008 and established the UK Research Centre in Chippenham, UK, which opened in July 2009. He has authored more than 130 research publications within the fields of Pharmaceutics, Analytical Chemistry, and Aerosol Science, and is co-inventor of 30 patents relating to pressurized metered dose inhaler formulations and devices. These inventions led to the Chiesi Modulite technology, which has seen formulations of beclomethasone dipropionate, budesonide, formoterol, and a beclomethasone dipropionate-formoterol combination becoming commercialized in several European countries. He can be reached at D.Lewis@Chiesi.com.