Recent developments have demonstrated that immunotherapies are capable of achieving durable anti-tumor responses in patients with metastatic cancer. According to Yang and colleagues (2016), one modality that has been able to induce durable complete regressions in patients with melanoma has been adoptive cell therapy (ACT).1 Adoptive cell therapy is a more technical approach in which the patient’s autologous T-cells are expanded, manipulated ex vivo, and then re-infused into the patient to exert an anti-tumor response. Sometimes, immune cells that naturally recognize melanoma are used, while at other times they are modified to make them recognize and kill the melanoma cells.

Throughout the past 10 to 15 years, investigators have pursued different modalities of ACT that include:

-Tumor-Infiltrating Lymphocytes (TIL): T-cells are grown from the tumor itself

-Endogenous T-cell Therapy: tumor-specific T-cells are grown from the blood

Of these, TIL therapies have been widely studied and demonstrated consistently favorable results in preclinical animal models, supporting their viability as a mainstream treatment for metastatic melanoma (Table 1). 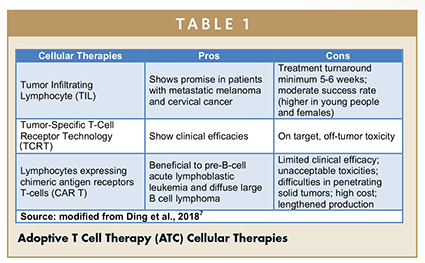 Rosenberg and colleagues at the Surgery Branch of the National Institute of Health (NIH) pioneered the use of TILs in mice and demonstrated that the combination of autologous TIL and cyclophosphamide could induce regression of metastases.2 This was followed 2 years later with a landmark publication that presented the first human study which demonstrated how TILs could induce cancer regression when administered to patients with metastatic cancer.

TILs are a collection of lymphocytes that have penetrated the stroma of a tumor. These TILs are largely comprised of T-cells that are actively engaged in tumor destruction. While other types of ACT utilize circulating T-cells in the blood, TIL therapy relies on a tumor biopsy taken from the patient. In this instance, a tumor at least 2 cm in diameter is first harvested by excisional biopsy and then dissected into fragments (approximately 1-3 mm3) and placed in wells with other agents. IL-2 is added, and over the following weeks, the TILs proliferate while the adherent tumor cells disappear as they die off, or are killed by the lymphocytes.

Following a growth period of 2-4 weeks, the TILs are tested for T-cell phenotype by fluorescence-activated cell sorting (FACS) and for reactivity to autologous tumor cells. The wells containing cells with the highest cytokine-release after co-culture with autologous tumor cells are selected and expanded for 2 weeks using a rapid expansion protocol with agonistic concentrations of anti-CD3 antibody, IL-2, and irradiated, allogeneic feeder cells derived from normal donor pools of peripheral blood mononuclear cells. The total generation time from start to finish is approximately 5-6 weeks (Figure 1). In essence, TIL therapy utilizes T-cells that already recognize and target a patient’s tumor as a treatment for their cancer. 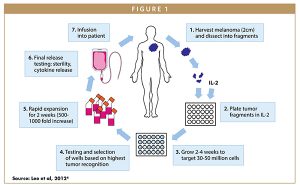 In addition, it was also found that patients who received systemic therapy less than 30 days before tumor harvest had a success rate of 47% compared with a 66% rate when the last therapy occurred greater than 90 days before harvest. Currently, TILs can be generated successfully from 60% to >90% of melanoma tumor samples, at different institutions.

FEASIBILITY OF TIL AS A MAINSTREAM TREATMENT OPTION

Although the clinical benefits of TIL in metastatic melanoma are well recognized, a number of questions still remain. For example, Lee and colleagues (2012) point out the clinical limitations that characterize TIL and how it is used as a treatment option includes the 5-6 week period currently required for TIL generation – a waiting time that is often too long for many patients diagnosed with aggressive metastatic melanoma.4 In addition, Rosenberg notes that the intense myeloablative conditioning regimen associated with the highest response rates would exclude a significant number of patients who are not fit enough to tolerate the toxicities related to the treatment regime. Such patients would therefore require intense support to complete the therapy safely.2

Furthermore, the expense associated with TIL generation and other associated costs of inpatient care for the preparative lymphodepletion and HD IL-2, also provide a significant barrier to its uptake in the wider population. Nevertheless, it is hoped that TIL generation will become less expensive as production is scaled up for higher numbers of patients than the small groups typically treated on clinical trial programs.

Meanwhile, Weber and colleagues (2011) highlight a key logistical barrier to TIL therapy becoming a widely available treatment option, pointing to the technical requirements of TIL generation, which is currently only performed in a limited number of academic institutions.5 Nonetheless, the authors suggest one mode of overcoming such difficulties could be through the implementation of a similar model used for hematopoietic stem cell transplantation, whereby patients travel to key specialist institutions for treatment, and then return home for follow-up care. Another proposal made by the CTEP subcommittee on the wider use of ACT is the development of a centralized TIL growth facility that would receive the tumor, grow the TIL, and transport the expanded cells out to the collaborating institutions for use in treatment.

The production and reactivity of TIL products for these other solid tumor types varies, amongst others, due to the heterogeneity in mutational load, and thus neoantigens, and lymphocytic infiltration with variations of CD4+ and CD8+ T-cells.

Despite the many promising beneficial effects, TIL therapies also have limitations. According to Rohaan and colleagues (2018), TIL is the ultimate personalized immunotherapy, given that for every individual patient, a specific infusion product needs to be manufactured, leading relatively high costs.6 In addition, the success rates of TIL outgrowth can vary between 75% and 97%, implying a risk for every patient in that the treatment program may have to be cancelled.

Furthermore, the production time of a TIL product is more than one month, which may be too long for some patients with rapidly progressive disease. Moreover, highly specialized good manufacturing practice (GMP) facilities and production staff needs to be in place, which requires extensive investments and training. Nevertheless, the role of TIL therapy as an anticancer therapy in melanoma and possibly other solid tumors still holds great promise and could become a viable course of treatment in the future.

There are compelling reasons to follow this particular treatment modality, including the following:

-It goes without saying we want more patients to find reprieve from these brutal diseases, and TIL therapy has shown robust, reproducible clinical responses (yes, not without challenges).

-Since early 2018, just two new start-ups (profiled fully in the BCC report) actively working on this therapy have attracted more than $100 million from investors and research funds.

-Iovance Biotherapeutics Inc., which showed promising studies at ASCO 2019 using this therapy, is spending $75 million building a commercial-scale cell therapy plant, and as of June 1, the biotech’s stock has nearly doubled with a market value of $2 billion.

-The logistical challenges associated with the production and delivery of these therapies are gradually being addressed, paving the way for alternative ACTs to reach the market that can target hard-to-treat solid tumors.

-Significant business opportunities exist for pharma and biotech to partner with leading institutions in the US and Europe to explore this exciting area of ACT development, where intellectual property (IP) is still in its infancy and commercial opportunities abound.

This executive summary is based on the following market research report published by BCC Research: Tumor-Infiltrating Lymphocytes: A New Frontier in Cancer Immunotherapy (BIO129A). For more information, visit https://www.bccresearch.com.