The Ubiquitin Proteasome System (UPS) represents one of the most studied and challenging areas in basic and applied science. Indeed, the scientists who discovered this cellular phenomenon were awarded the prestigious Nobel Prize in Chemistry in 2004.

Since 2004, ubiquitin ligases and proteasome function have become one of the major targets for pharmaceutical and drug discovery companies. However, further development in this sector remains challenging. E3 ligases have been long regarded as “undruggable targets.” Despite these failures both scientifically and financially, humiliations did not fully disrupt intense research efforts that persisted due to the enormous potential upside. Here, we discuss underexploited strategies, traditional approaches that can be optimized, novel techniques beginning to emerge and pay dividends, and results propelling this field toward better clinical outcomes. Targeted protein degradation (TPD) in particular, is renewing optimism in what was at one stage a field drowning in garbage proteins.

The main reason for that is complexity of the system and requirement for reliable well-established assay platforms to develop therapeutics. The ubiquitin-proteasome system plays a central and essential role in regulating protein homeostasis in mammalian cells. There is a complex multistep process involving the polyubiquitination of proteins prior to their proteolytic degradation by the 26S proteasome complex. Overall, protein ubiquitination occurs through a cascade of enzymatic reactions, involving an E1 ubiquitin-activating enzyme, an E2 ubiquitin-conjugating enzyme, and, finally, an E3 ubiquitin-ligase enzyme complex. Repeated iterations of this ubiquitination process result in long chains of ubiquitin repeats on a given substrate and posterior degradation by the proteasome.

Importantly, E3 ubiquitin ligases (more than 700 are known in humans) confer substrate specificity to the protein ubiquitination pathway, making this enzyme a very attractive target for specific and less toxic therapeutic treatment, reducing side effects that can be related with other UPS components, such as proteasome inhibitors. 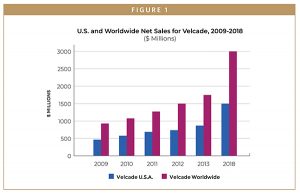 Indeed, proteasome inhibitors (Velcade as an example) became huge blockbusters with billions of dollars in annual sales (Figure 1). Second-generation inhibitors also brought substantial amount of revenues. Although Velcade is a successful drug for multiple myeloma treatment, it still has a lot of side effects. Because the compound affects protein degradation pathway in general, scientists are looking for more targeted approaches in drug development. Thus, targeting E3 ligases that by definition degrade specific cellular targets seems to be more logical.

However, despite extensive research (structure, function, localization, and regulation), E3 ligases still didn’t make it big in drug development market: the development of small molecules against E3 ligases has been rewarded with very limited success, leading to the idea that they are undruggable targets.

As of today, three compounds (thalidomide, pomalidomide, and lenalidomide) targeting the E3 ligase Cereblon have been approved for the treatment of multiple myeloma or mantle cell lymphoma, and only a handful of compounds targeting the XIAP E3 ligase, IAP, and the MDM2 E3 ligase have entered clinical trials. Additional research efforts have focused on targeting other E3 ligases, including Skp2, βTrCP, Fbox3, VHL, and Parkin. However, there is a significant difference between the number of E3 ligases and the number of drugs in clinical trials or approved. Overall, it can be considered that the field is still very much in its preliminary stage.

So, why does the development of novel E3 ligase molecules remain a relatively unexploited source by pharmaceutical industry? The answer is that the general biology and chemistry of the E3 ligases is very complex. Moreover, linking individual E3 ligases to their substrates is an essential precursor step. This relies on either a functional connection or a physical association between proteins. However, biochemical screens have proven not to be effective to identify E3 substrates, as the binding between E3 ligases and substrates is often intrinsically weak.

In summary, more knowledge is required on the biology and mechanism of E3 ligases, their substrates, and finally how they link to diseases in order to increase the success of future drug discovery entrepreneurships.

There is a novel approach to target and dispose of troublesome proteins, and it is creating huge interest in the drug development industry.

The emerging modality, known as targeted protein degradation (TPD), uses a bifunctional chemistry to create chimeric molecules that bind to a protein of interest while simultaneously tagging it for degradation via the cell’s own proteolytic machinery.

This represents an entirely new rationale in the way proteins are targeted: instead of relying on small molecules that bind to druggable targets, such as enzymes, ion channels, and receptors (representing 10% to 15% of cellular proteins), TPD offers a unique means to unlock the remainder of the proteome, including previously “undruggable” proteins, such as transcription factors and scaffolding molecules.

A significant body of preclinical data, generated since PROTACs were first introduced 15 years ago, demonstrates that PROTACs provide a robust approach to expose new cell biology and to generate novel therapeutics with the potential to target currently undruggable proteins. PROTAC technology has a number of advantages:

-PROTACs can degrade proteins regardless of their function. This includes the currently “undruggable” proteome, which comprises approximately 85% of all human proteins.

-They have the ability to target overexpressed and mutated proteins, as well as the potential to demonstrate prolonged pharmacodynamics effect beyond drug exposure.

-Due to their catalytic nature and the pre-requisite ubiquitination step, exquisitely potent molecules with a high degree of degradation selectivity can be designed.

However, in practice, engineering bifunctional molecules that can effectively bind a protein target and an E3 ubiquitin ligase in sufficient proximity is not so trivial. The rules of this process are still being understood and often combine prior knowledge of a protein’s structure and function with high throughput chemical platforms. Proteins of interest (the protein to be degraded and the E3 ubiquitin ligase) are interrogated with small molecule libraries to identify binders that can then be joined in such a way that a permissive complex is formed, enabling ubiquitination of the target protein.

Although TPD/PROTACs can help with many of the drawbacks of small molecular drugs, it has also challenges that need to be addressed. One concern is understanding the biological consequence of effectively knocking-out a protein from a cell that might well have multiple functions.

Another obstacle is finding ways to deal with the size of these bifunctional molecules, and the impact this has on metabolic stability and delivery routes. The size of small molecule inhibitors is typically in the range of 300 Da to 500 Da, while TPDs range from 700 Da to 1000 Da. One concern is that this might affect the oral availability of TPDs.

Despite those disadvantages, many believe that PROTAC technology will revamp UPS drug discovery and development introducing new approved drugs into market in the next couple of years. 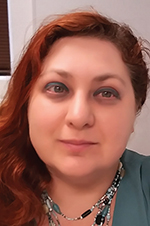 Dr. Marianna Tcherpakov has more than 10 years of experience as a bench scientist specializing in the areas of biochemistry, cell biology, and industrial assay development and drug manufacturing. She has contributed to a number of scientific publications and holds several patents. She has expertise as an assay development scientist and is familiar with different research field trends and likely future developments. She earned her MSc in Science Management from NYU and her PhD in Molecular Neurobiology from Weizmann Institute of Science in Israel.