Finding a cure for cancer has been the foremost goals of researchers for decades. It’s like archeologists searching for the Holy Grail or the lost city of Atlantis. Only today, science continues to make progress in this fight, exploring a variety of theories and pathways toward a seemingly elusive finish line.

Lately, research into immunotherapies have taken center stage; seeking to utilize one’s own immune system to attack the cancers. CAR-T cells, vaccines, and checkpoint inhibitors have all shown some levels of success by shrinking cancerous tumors, slowing down, or in some cases, halting cancerous growth, all with a central focus of prolonging lives.

Within the immunotherapy landscape, checkpoint inhibitors – antibody agents that mobilize the body’s T-cell response – have moved front and center with a handful – KEYTRUDA®, OPDIVO®, and Yervoy® – receiving FDA clearance. However, despite the clinical and now market success of checkpoint inhibitors, the technology has thus far helped only a relatively small number of patients in certain cancer indications.

A recent blog post from the Dana-Faber Cancer Institute best describes a key challenge with cancer that appears to limit the effectiveness of immunotherapy technology:

“Hot tumors often have a high mutational load. That is, they have many changes in their DNA code that cause the cancer cells to produce distinctive new molecules called ‘neoantigens’ on their cell surface. These neoantigens make the tumor more prone to recognition by the immune system, and thus more likely to provoke a strong immune response. ‘Cold’ tumors, by contrast, are cancers that, for various reasons, haven’t been recognized or haven’t provoked a strong response by the immune system. Immune T cells have been unable to penetrate such tumors. The T cells have been excluded by components of the microenvironment. The microenvironment in and around tumor cells comprises blood vessels, structural elements, and specialized immune cells; the latter include myeloid-derived suppressor cells and regulatory T cells, or Tregs.”

Checkpoint inhibitors work by releasing the brake on the immune system. As such, these drugs are most effective against “hot” tumors already studded with T cells and other immune cells. “Cold” tumors are largely resistant to checkpoint inhibitors because they lack significant engagement by immune cells. So the question is now, how do you correctly turn cold tumors hot? 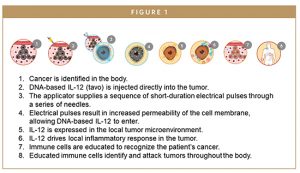 Cytokines are molecular messengers that allow the cells of the immune system to communicate with one another to attack a target antigen in a coordinated, robust, but self-limited response. Doing so, cytokines enable the rapid propagation of immune signaling in a multifaceted and efficient manner.

High-dose interleukin-2 (IL-2), a cytokine, was the second immunotherapy approved by the FDA to be used as a primary or stand-alone cancer treatment (the first was Interferon-alpha or IFNa). Though proven to be an effective regimen for metastatic melanoma, systemic high-dose IL-2 is also associated with toxicities. Because of intolerable side effects, most patients do not receive 100% of the planned dosing in a full cycle or course of high-dose IL-2.1

A small hand-held applicator delivers a pulsed electric field to cells which temporarily increases the permeability of cell membranes (electroporation). Tavo is then delivered to the electroporated cells, which triggers each cell to produce and secrete IL-12 protein, which then identifies and eliminates cancer cells as part of a natural immune response.

The treatment is designed to produce a controlled, localized expression of IL-12 in the tumor microenvironment, which in turn, enables the immune system to target and attack tumors throughout the body. Currently, tavo is being investigated for treatment of metastatic melanoma and triple negative breast cancer. However, data has been encouraging enough to suggest a broad range of applications of tavo and to pursue combination therapies aimed at potentially addressing the 70% of cancer indications in which checkpoint inhibitors have lacked efficacy due to inhospitable – “cold” – tumor conditions that are devoid of CD8+ T cells.

TURNING UP THE HEAT ON MELANOMA

One area where this treatment regime could succeed is melanoma, a type of skin cancer that becomes more difficult to treat once it spreads beyond the skin, such as to the lymphatic system or visceral organs (metastatic disease). Although melanoma is a rare form of skin cancer, it accounts for more than 75% of skin cancer deaths. The poor prognosis of advanced melanoma is in part due to the limited therapeutic options available. Surgery and radiotherapy provide mainly palliation, and chemotherapy, most commonly with dacarbazine, has failed to show any consistent survival benefit.2

Given its occurrence in young individuals, the potential years of life lost to melanoma can be higher when compared with other cancers. The American Cancer Society estimates that approximately 87,000 new melanoma cases and 10,000 deaths from the disease will occur in the US in 2018. Additionally, the WorldHealth Organization (WHO) estimates that approximately 132,000 new cases of melanoma are diagnosed around the world every year.

Based on those data, OncoSec conducted a Phase 2 study involving 22 patients with melanoma predicted to be unresponsive to checkpoint inhibitors via observation of TIL status, PD-L1 expression, and IFN-g signature (three different biomarker assays). All patients were treated with a series of pulsed tavo injections directly into their lesions followed by standard intravenous delivery of pembrolizumab.

We have demonstrated that tavo turns these cold tumors hot by promoting the generation of antigen-specific cells, triggering the PD-1 immune checkpoint, and providing the “substrate” for effective anti-PD-1/PD-L1 therapy.

The next clinical trial proposed by OncoSec will also evaluate the combination of tavo and pembrolizumab but enroll only patients with melanoma that failed to respond to anti-PD-1 checkpoint inhibitors – a significant step toward potential FDA approval.

Applying the tavo combination approach to Triple Negative Breast Cancer (TNBC) has produced some encouraging preliminary observations. Like those suffering from late-stage melanoma, it’s well-documented that less than 5% of patients with heavily pretreated metastatic TNBC will respond to anti-PD-1 checkpoint therapies. In a study designed to determine whether tavo would elicit a pro-inflammatory molecular and histological signature in treated as well untreated sites in patients with inoperable locally advanced or recurrent TNBC, compassionate use of nivolumab (OPDIVO®), a checkpoint inhibitor treatment, was given to two patients at the investigator’s initiative 30 days after being treated with one cycle of tavo. The observed responses – including tumor reduction and positive outcomes in both treated and untreated lesions – were remarkable and unexpected. This indicates a high probability that IL-12 primed the tumor environment and impacted the clinical result.

THE POWER OF PARTNERSHIPS

Combination therapy, a treatment modality that combines two or more therapeutic agents, is a cornerstone of cancer therapy.3 Combining treatments that have different mechanisms of action can kill more cancer cells and reduce the chance that drug resistance will emerge. The overall goal is to improve a patient’s response to therapy without substantially increasing toxicity.4 When companies explore novel delivery methods, like electroporation, the positive effect on efficacy and safety can be increased even more. Collaborations between drug developers is critical to advancing cancer treatments like immunotherapy – and the field of immune-oncology overall – and to moving the world closer to a cure.

OncoSec’s clinical trial collaborations, with drug innovators, such as Merck (KEYTRUDA®) and Bristol Myers Squibb (OPDIVO®), provide a clear illustration how combining therapeutic approaches can create a whole that’s worth more than the sum of its parts. After all, the battle between cancer and the immune system is a complex mix of activity and inhibition. The key to improving patient outcomes is to combine treatments that stimulate the immune system and limit the tumor’s ability to evade immune detection.

The results thus far should give everyone great hope for the future. However, much work remains to further improve and extend immunotherapy’s benefits.

On the pathway toward drug discovery, we often know where we want to go. But sometimes the challenge is finding a way to get there. When it comes to utilizing the human immune system to fight cancer, we believe we have discovered a platform that works. And now that we know a trigger mechanism that can turn cold tumors hot, researchers can set their focus on delivering potentially life-saving drugs directly to core of a cancerous tumor by blocking the cancer cells from turning off the body’s natural immune system, and allowing it to attack the tumor from within.

Tavo, in combination with KEYTRUDA® and OPDIVO®, is showing promise in doing just that. Early clinical data shows that tavo combination therapy can slow down, stop, and reverse certain solid tumor cancers. Success here not only holds promise to treat today’s cancer patients, but provides the key that may unlock the door to treating other types of cancer down the road. 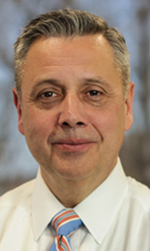 Daniel J. O’Connor is President and Chief Executive Officer of OncoSec Medical, a biotechnology company pioneering new technologies to stimulate the body’s immune system to target and attack cancer. Additionally, he is currently the Vice Chairman of BioNJ and was recently nominated to serve on the New Jersey Biotechnology Task Force. Throughout his nearly 20 years in the biotechnology industry, he has utilized his combination of executive, legal, and regulatory experience in the biopharmaceutical industry to enhance the business and technological growth potential for several leading companies, including Advaxis, Inc., ImClone Systems, Bracco Diagnostics, Inc., and PharmaNet, now known as inVentiv Health. Prior to joining OncoSec, he was the President, Chief Executive Officer and Director of Advaxis, Inc., transforming it into a leading cancer immunotherapy company with collaboration partners including major biopharmaceutical manufacturers, such as Amgen Inc., Merck & Co., Bristol Myers Squib, and AstraZeneca. Mr. O’Connor graduated Penn State University’s Dickinson School of Law in Carlisle, PA, and currently serves as a special advisor to its Dean.