INHALATION THERAPY – An Overview to Drug-Nebulizer Combination Development With Biologics


BENEFITS OF INHALATION THERAPY FOR DELIVERY OF BIOLOGICS

Biologic drugs have been shown to provide great contribu­tion to the treatment of several rare diseases in the past few years. When looking at the number of new drugs approved by the US FDA, biologics have accounted for approximately 27% of new approvals since 2014.1 Although their administration is tradition­ally performed via intravenous injections, research has revealed that for the treatment of diseases that affect the respiratory air­ways, more specifically the lower airways, direct administration for topical delivery through inhalation has presented itself as a more suitable approach.

Two of the major benefits of inhalation therapy to support the delivery of biologics are the reduction of potential systemic side effects and the need for lower doses to achieve therapeutic effect. Currently, the most common route of administration, in­travenous administration, has been reported to increase systemic exposure of different parts of the body to the biologic compo­nents, hence only allowing a small amount of the initially injected drug to reach the lungs. Conversely, inhalation therapy has demonstrated that by directly delivering biologic drugs into the lungs, active pharmaceutical ingredients can be successfully up­taken via topical delivery and further avoid systemic circulation. Moreover, while clearance of biologic components from the lungs mostly takes about 24 hours, plasma half-lives of antibodies may be clear only after 21 days or longer.2

In recent years, biologic drugs are increasingly being inves­tigated for delivery with inhalation therapy, which has initiated more in-depth discussions about the implications of formulation development and their pairing with adequate inhaled devices for more efficient treatment outcomes.

Biologic drugs are particularly susceptible to several factors, such as high temperature, shear forces, and extreme pH, which may lead to the denaturation of their structure or result in aggre­gation. Due to the aforementioned nature of biologic drugs, se­lecting the most suitable delivery system is vital to ensure that the functionality of the drug remains highly active when reaching the airways to effectively treat respiratory diseases.

The additional processing required to administer biologic drugs via dry powder inhalers (DPIs), which may require the for­mulation to be freeze or spray dried, exposes the biologic drugs to extreme conditions that can easily lead to their degradation. On the other hand, metered dose inhalers (MDIs), which permit the formulation to be in the liquid state, may also degrade the structure of proteins by allowing them to be in a liquid environ­ment for extended periods of time and in contact with hydrofluo­roalkane (HFA) propellants further risking their integrity. Although in recent years it has been possible to overcome some of the is­sues previously mentioned, the large doses required to reach therapeutic treatment may also lead to disregard DPIs and MDIs when selecting a fitting device, leaving nebulizers as the most suit­able delivery system.3

Nebulizers, devices that transform liq­uid medication into aerosol, are usually di­vided in three categories: jet, ultrasonic, and mesh nebulizers. The formerly devel­oped jet nebulizers operate by generating aerosol by the means of pushing air pres­sure into a container filled with liquid med­ication. The shear forces produced during this process are highly detrimental to bio­logic drugs that can readily aggregate during the aerosolization process. Simi­larly, the heat generated by ultrasonic neb­ulizers that produce aerosol with ultrasonic waves, which are driven by a piezoelectric component, can also lead to denaturation of biologics, making them inactive. Only the newest type of nebulizers, mesh nebu­lizers, have been shown to provide one of the most adequate mechanisms for the de­livery of biologics, with low shear forces and heat generation.4

As a result of this scenario, several of the new developments involving inhaled biologics are in combination with mesh nebulizers, covering indications ranging from asthma and chronic obstructive pul­monary disease (COPD) to cystic fibrosis and non-cystic fibrosis bronchiectasis.

One of the key elements for the suc­cessful delivery of biologics is the selection of excipients. The addition of excipients can help protect the structure of biologic compounds, and subsequently aid them to retain their stability and activity in aqueous solutions and even after nebulization. Un­fortunately, when it comes to inhaled bio­logics, the number of approved inhaled excipients by the US FDA remains limited.5 Surfactants, such as polysorbate, as well as sodium chloride and arginine, are commonly used in biologic formulations to regulate the physicochemical characteris­tics that will later influence the aerosol characterization when in combination with nebulizers.

To achieve desired aerosol character­istics and target high lung deposition, some of the main properties that are re­lated to aerosolization of the liquid med­ication are viscosity, surface tension, and osmolality. Several biologic formulations tend to present higher levels of viscosity, especially at high concentrations. This fac­tor is commonly associated to lower output rate of aerosol generation, resulting in longer nebulization time. Viscosity-reduc­ing excipients, such as lysine and arginine, can be added to the biologic formulation to increase output rate, which has been described as an effective way to improve patient adherence by reducing nebuliza­tion time.6 Other frequently used excipients that have been found to stabilize biologic formulations are buffers containing sodium chloride, hydrochloric acid, citric acid, among others, by positively adjusting and maintaining the pH value of the for­mulations.

In a similar fashion, incorporation of polysorbates can decrease surface tension and at the same time stabilize biologic for­mulations by preventing aggregation. Nonetheless, it has been stated that lower surface tension results in lower output rate for mesh nebulizers, which can typically aerosolize solutions in the range of 35-75 mN/m (Figure 1).7 Finally, the use of certain excipients has also been linked to causing coughing response in patients receiving their inhalation treatment due to stimulation of the transient receptors in the airway afferent nerves.8

In addition to the formulation tailor­ing alternatives to deliver biologics, mesh nebulizers also offer customization solu­tions that are increasingly becoming a new trend for the development of drug-device combination products. Adjustments in the hardware and software of the devices in­tend to satisfy the requirements to effec­tively deliver biologic drugs without affecting their properties. Accounting as one of the fundamental factors in the cus­tomization of these devices is the mesh membrane itself. Mesh membranes can vary based on different aspects of their composition, such as material, formation mechanism, pore size and structure, thick­ness of the membrane, and pitch. The combination of these aspects generates a vast number of alternatives to fit formula­tion characteristics. Similarly, modifications on the mesh driving power and frequency derived from the firmware can further sup­port the delivery of highly viscous biologic drugs or those with lower surface tension induced by polysorbates.

Hence, co-development of a drug-nebulizer combination product may attain higher levels of success when knowledge from both formulation and device side are integrated to develop a combination prod­uct in which aspect of the two parts are ad­justed to achieve the desired outcome (Figure 2). Then fluid communication be­tween the teams becomes an essential as­pect to address issues at an early stage of the feasibility studies, avoiding potential setbacks in the subsequent steps of the de­velopment process.

Due to the higher cost of biologic drugs, one of the principal objectives when nebulizing these drugs is to reach elevated levels of active pharmaceutical ingredients being delivered to the respiratory airways. Most mesh nebulizers operate under a continuous-output mode; however, new technologies have been incorporated to these devices to switch to a mode in which aerosolization only takes place during a fraction of the inhalation cycle, thus reduc­ing the amount of aerosol otherwise wasted during exhalation.9 This mecha­nism called breath actuation is in many cases the preferable solution in the devel­opment of novel drug-nebulizer combina­tion products.

Breath actuation can be incorporated to the nebulizer relying on different mech­anisms, which can be either mechanical or electronic, with pressure sensors being one of the most widely applied technologies. Restricting aerosol formation during a spe­cific fraction of the breathing cycle, does not only allow to increase the delivered dose, but also greatly reduces the amount of aerosol wasted in the environment dur­ing exhalation as well as the potential ex­pulsion of aerosol that is not fully deposited into the lungs. This type of aerosol that is known as fugitive emission has been labelled as hazardous for people surrounding those receiving their inhala­tion treatment, resulting in an additional reason to prevent their excessive forma­tion.10

Another feature with rapidly increas­ing demand in the inhalation field is con­nectivity. In recent years, connectivity has become the top choice for inhalers and nebulizers, aiming to monitor and improve patient adherence.11 Biologic drugs in combination products with nebulizers are also expected to move toward this trend as it will help better assess the efficacy of drugs either in clinical trials or later during commercialization. Creating a connected environment between physicians, nurses, caregivers, and patients would allow to closely follow the treatment of different diseases, monitor the patient’s evolution, and improve the expected outcome even when the treatment is performed remotely from home. Due to the involvement of personal and private information, the development of these networks comes along with secu­rity risks that should be addressed under specific regulations to guarantee the protection of patients’ private data at all times. Several regulations and guidelines are already in place, including the Health Insurance Portability and Accountability Act (HIPAA) and the General Data Protection Regulation (GDPR).12

As novel therapies continue to be de­veloped with the advancement of biologic treatments, new approaches in the inhala­tion therapy field, concerning to proteins, peptides, and nucleic acids, are also pro­jected to continue to grow. At the current time, mesh nebulizers are positioned as one of the top systems to deliver these for­mulations. The final realization of these projects will ultimately depend on the inte­gration for co-development between phar­maceutical companies and devices developers to bring together new treat­ment options for common and rare dis­eases. Moreover, the incorporation of new features, such as connectivity and breath actuation, will continue to add value to the development of biologic-nebulizer combi­nation products by ensuring high levels of drug delivery and a well-structured and se­cure network to monitor and improve pa­tient adherence. 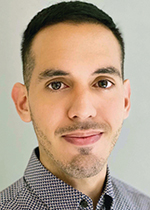 Hernan Cuevas Brun is Marketing Manager at HCmed Innovations. He has more than 7 years of experience in the drug delivery field, holding a BS in Biomedical Engineering and a Master’s in Business Administration. He is responsible for the market positioning of HCmed’s nebulizers, supporting the development of drug-nebulizer combination products with pharmaceutical companies, while also coordinating the products’ branding and assisting with business development projects. Moreover, he is involved in the development of connected devices, supporting the company’s programs and establishing alliances with new partners to expand into digital health.