Low-solubility compounds are commonly encountered in the drug discovery process. It is widely estimated that more than half of the promising small molecules identified in current drug discovery programs exhibit low solubility. Molecules with low permeability and rapid metabolism also plague discovery programs. Each of these shortcomings poses challenges for oral absorption, which must be addressed because of the prevalence of new compounds that fall into these categories.

This paper describes broadly applicable formulation approaches and biomodeling tools that have been successfully used to improve the solubility and in vivo performance of low-solubility compounds. The approaches, including spray-dried drug/polymer dispersions and drug/polymer nanoparticles, are ideally suited for use early in the drug development process from discovery through formulation and toxicology screening. In addition, the approaches are readily scalable, facilitating progression of compounds through commercial manufacture. Combined with the judicious use of biomodeling tools, these approaches can result in efficient selection of compounds and formulations for advancement.

To categorize the types of drug molecules encountered during drug discovery, two systems are useful: the commonly cited biopharmaceutical classification system (BCS) and the more recent developability classification system (DCS), both of which categorize drug molecules based on solubility, dose, and permeability.1 Figure 1 is a representation of the DCS model. Class II compounds, which exhibit low solubility and high permeability, are of particular interest because they are common in discovery programs and can often be delivered orally with the help of solubilization technologies. The DCS system provides a further distinction between compounds in Class IIa, which can be successfully delivered via an increase in dissolution rate (ie, reduced particle size), and those in Class IIb, which require solubilization. 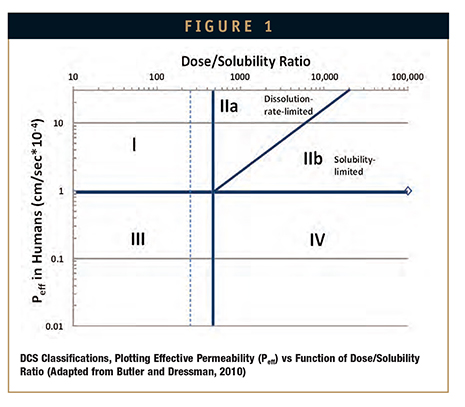 Among these approaches, amorphous dispersions stand out because they are broadly applicable, are scalable from milligram to metric ton scale, and offer a direct path to solid dosage form development using well tolerated and precedented excipients. Properly formulated dispersions provide improved solubility and absorption due to increased dissolution rate, higher inherent solubility, and sustained supersaturation in intestinal fluid.

Figure 2 is a modified version of the DCS map shown in Figure 1, showing the approximate space for drugs that can be enabled by amorphous dispersions and nanocrystals at typical doses. Note that the large space for dispersions overlaps with the nanocrystal space, indicating the breadth of applicability for dispersions. As shown by the large green arrow, some compounds can be delivered as salts or other high-solubility crystalline forms, dosed along with crystallization-inhibiting polymers. 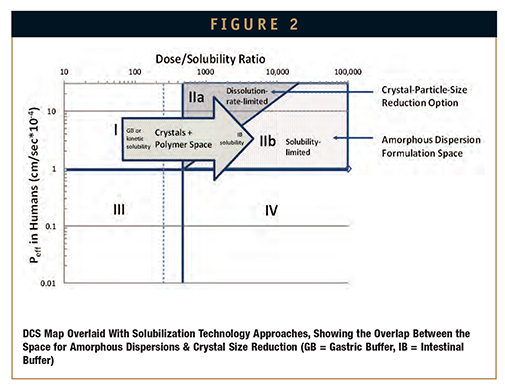 Further, we provide information on these solubilization approaches, as well as information on a biomodeling tool that is used to refine formulation selection further during early stage development.

Amorphous drug/polymer dispersions are well suited for the oral delivery of lowsolubility compounds and for formulation screening in discovery and early development. Tuning the composition of the dispersion by polymer selection, drug loading and, in some cases, the addition of surfactants, produces dispersions with excellent dissolution performance and physical stability for a broad range of lowsolubility compounds.

Dispersions are most commonly manufactured by two processes: spraydrying and HME. The HME process can have significant cost advantages at large scale for drugs and formulations that are amenable to the high-temperature processing. However, HME is not suitable for drugs and polymers that cannot withstand exposure to high temperatures and is difficult to use at small scales. In contrast, spray-drying is particularly flexible with respect to scale and formulation.

Spray-dried dispersions (SDDs) can be readily manufactured at the milligram scale needed to formulate compounds in discovery and early development programs and is readily scalable up to the metric ton capacity. At Bend Research, we use custom-built, small-scale spray-dryers (Figure 3) to manufacture SDDs at high yield using as little as 5 mg of drug. Smallscale commercial spray-dryers are also available. 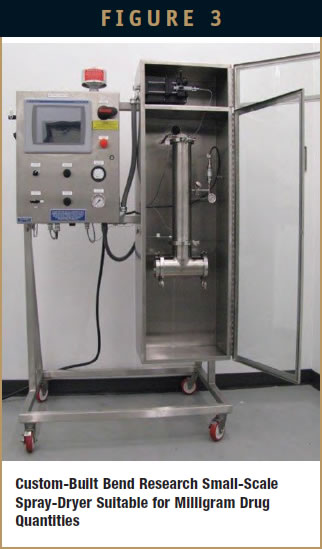 Because of this small-scale manufacturing capability, SDDs are well suited to screening formulations for compounds and providing supplies for initial pharmacokinetic (PK) or toxicology studies early in drug discovery. In early drug discovery, when the supply of active pharmaceutical ingredient (API) is limited and time and cost are critical, milligramscale SDDs can be manufactured using standardized low-drug-loading formulations for rapid in vitro and in vivo testing. If the SDD technology is selected for advancement, compounds can be rapidly evaluated for efficacy and toxicology at an early stage, leaving formulation optimization until after the lead compound has been selected. With knowledge of some basic drug properties, such as solubility profile, Log P, melting point, and glasstransition temperature, SDD formulation development can be rationally directed to focus screening on a minimal number of formulations.

At Bend Research, we have found the enteric polymer hydroxypropyl methylcellulose acetate succinate (HPMCAS) to be particularly well suited to SDD formulations for many low-solubility compounds. This polymer, which is also sold under the trade names hypromellose acetate succinate and AQOAT (Shin-Etsu Chemical Co. Ltd.) and AffinisolTM (The Dow Chemical Company), is available in three grades: HPMCAS-L, HPMCAS-M, and HPMCAS-H.

Figure 4 shows a formulation map that was developed at Bend Research based on the formulation of hundreds of lowsolubility compounds as HPMCAS SDDs using various drug loadings and HPMCAS grades. The map allows the formulator to screen a limited set of drug loadings (ie, drug/polymer ratios) that are likely to produce physically stable SDDs with the desired performance. 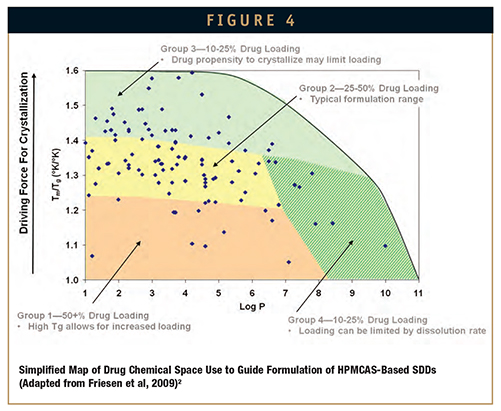 Regardless of the ultimate formulation chosen, SDDs can be used as a broadly applicable tool for pharmacophore screening, lead selection, and toxicology testing. And, given the ready scalability of the spray-drying process, formulations can be tested with the confidence that they can be advanced to the clinic and the market. In some cases, particularly for compounds with low melting points, an HME process can be developed for use at large scales that may offer better process efficiency as the compound and formulation move through the development process.

Aqueous suspensions of drug/polymer nanoparticles can be prepared at the milligram scale by two approaches: emulsion-based (using solvents that are not miscible with water) and precipitationbased (using solvents that are miscible with water). An overview of the emulsion process and a typical suspension image are shown in Figure 5. 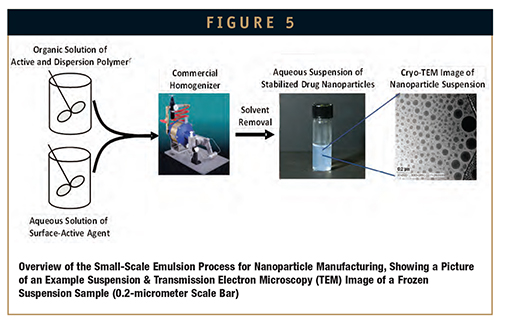 Nanoparticle formulations can be used for oral solubilization and, in many cases, provide similar or superior performance to that of SDDs. However, nanoparticles offer an additional advantage: nanoparticle suspensions are a natural tool for alternative delivery routes (eg, parenteral delivery).

Together with our partners, Bend Research has used amorphous drug/polymer nanoparticle suspensions to test discovery compounds using various parenteral routes, including subcutaneous and intravenous delivery. This formulation approach can provide improved exposure and toleration relative to solution-based parenteral formulations that require high concentrations of organic solvents and surfactants. Often, the ultimate goal of these programs is to develop an oral medication, but the parenteral route is used in animal models as a way to screen core pharmacophores and early lead compounds for efficacy and gross toxicology readouts. If a compound is selected for advancement using drug/polymer nanoparticles, the project team can have confidence there are several options for full development of amorphous dispersions for solubilization.

In combination with the aforementioned formulation approaches, predictive biomodeling offers another useful tool in discovery and early development. Biomodels can be used to predict drug absorption based on basic physicochemical and structural properties (eg, Log P, solubility) and some key assumptions or additional measurements (eg, permeability, metabolic stability). Using these predictions, compounds can be grouped into classes with more precision than allowed by the basic guidelines of the BCS or DCS systems. Predictive biomodels also enable prediction of whether and to what extent solubilization technologies will enable oral delivery of a given molecule or set of compounds.

While commercial software packages are available for PK biomodeling, Bend Research has developed a physicologically relevant compartmental biomodel for predicting the oral absorption of drugs. Figure 6 shows example (guidance surfaces) based on a compilation of absorption predictions from the Bend Research biomodel. In this approach, the absorption of hypothetical compounds is predicted for bulk crystalline drug and SDD formulations. To create the broadly applicable guidance surfaces, a number of assumptions are made regarding selected parameters, including permeability (assumed to be a function of Log P), dose (assumed to be constant at 10 mg/kg for this comparison), feeding state (fasted for this comparison), and dissolution rate. 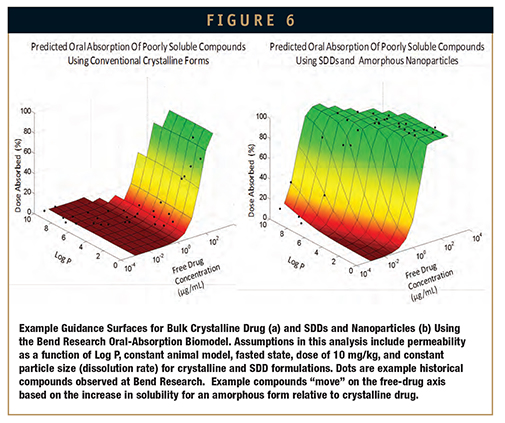 By making these generalized assumptions, the user can probe the surface to determine the expectations for success in delivering a broad array of compounds using these two approaches. Obviously, more specific predictions can be made for individual compounds based on known or assumed values of key parameters, such as permeability or particular dose levels, and feeding state.

Several conclusions can be drawn based on these guidance surfaces. For example, more-soluble compounds are obviously better absorbed with all else being equal. However, it is less obvious that in concert with solubilization by SDDs, at some ranges of solubility, a more liphophilic (generally more permeable) molecule may be delivered much more successfully than a more hydrophilic molecule with the same solubility. Said another way, if a tradeoff in properties must be made, a compound that has poor solubility due to high lipophilicity but has good permeability is preferable to a compound that has poor solubility due to high melting point but has lower permeability. The solubility of the more permeable lipophilic molecule can be increased using an amorphous dispersion to provide acceptable absorption. This sort of guidance is less obvious and can be useful when confronted with a number of potential leads that all suffer from low solubility, or when seeking to alter the physicochemical properties of a pharmacophore through chemical modifications.

These guidance-surface biomodeling outputs, in addition to others, can also be used to identify compounds that have low probabilities of successful delivery with any technology at the required dose. Thus, inefficient use of resources can be avoided, along with unnecessary selection of alternate compounds or direction of compounds for additional chemical modification rather than further formulation attempts.

Biomodeling can also be used to help identify challenges outside of solubility, such as permeability and metabolism. When compounds and formulations should provide acceptable absorption based on in vitro performance and modeling, but in vivo exposure is much lower than expected, issues with metabolism or permeability should be strongly suspected and explored before further formulation efforts are made to improve solubility.

Low-solubility compounds are routinely encountered in the drug discovery process. Many of these compounds can be successfully advanced using a variety of solubilization technologies. Amorphous dispersions are ideally suited for oral delivery of a broad range of low-solubility molecules and well suited for manufacture from the milligram to metric ton scale. Judicious use of additional tools, including predictive biomodeling, can assist in efficient selection of compounds and formulations for advancement. 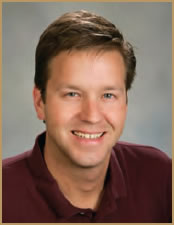 Dr. Corey J. Bloom is the Director of Formulation Science at Bend Research Inc. His responsibilities include developing pharmaceutical formulations to improve stability and bioavailability for oral and targeted drug delivery, assessing dosage forms and formulations, and developing biological models. He earned his BS in Chemistry from Gustavus Adolphus College and his PhD in Analytical/Materials Chemistry from Colorado State University. 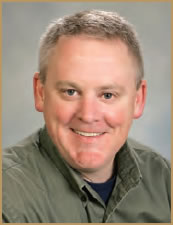 Dr. David K. Lyon is Senior Vice President at Bend Research Inc., where he leads efforts in scientific excellence and global business development. His expertise includes solubilization of pharmaceuticals, nanotechnology-based drug delivery, and controlled-release formulations. Dr. Lyon joined Bend Research in 1991, and he earned his BS in Chemistry from Western Washington University and his PhD in Inorganic/Organometallic Chemistry from the University of Oregon.