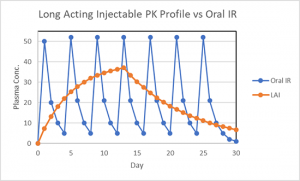 The ability to achieve the targeted pharmaceutical profiles of a therapeutic agent depends on dose, physicochemical/biopharmaceutical properties, pharmacokinetics, drug delivery technology, route of administration, and dosage form design. In designing an LAI delivery system, a defined clinical profile that addresses unmet medical needs and the physicochemical and biopharmaceutical characteristics of the compound must be considered in choosing a drug delivery technology and route of administration. Additionally, establishment of in vitro and in vivo correlation is beneficial to design and development of LAI dosage form. Figure 2 outlines the flow chart of a development process for LAI dosage forms.

The main objective for an LAI product is to achieve optimal safety and efficacy and patient compliance via controlling drug input into the human body over a longer period of time. An essential part of developing LAI products is to establish a relationship between the pharmacodynamic and toxic response and the systemic exposure of the drug or active metabolite(s) in the human body. Design of the release characteristics for an LAI product should be based on the optimal drug pharmacokinetic profile defined by understanding of clinical pharmacology and toxicology, ie, drug therapeutic window: minimum effective concentration and minimum toxic concentration.

The most important task of parenteral sustained delivery systems is the formation of a carrier that prolongs drug release and circulation in the blood system or a depot or reservoir at the injection site that results in prolonged release of drugs following drug administration. The most common routes of administration for LAI are intramuscular (IM), subcutaneous (SC), and less commonly, intravenous (IV), intraocular, implant, and intra-articular routes. SC has been frequently used for biological drug delivery due to advantages in ease of self-administration and better safety profile. The limitation of SC is that its dosing volume is limited to no more than 1-2 mL and potential issues in irritation and syringeability due to use of a smaller needle diameter. Whereas, a larger injection volume can be administered for IM (up to 2-5 mL) and IV (up to 100 mL). 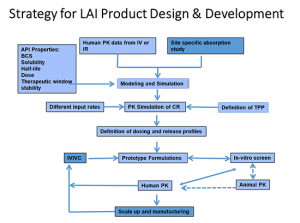 In developing LAI dosage forms, formulation feasibility assessment is the first step toward the product design and development. It is essential to evaluate the physicochemical (solubility and stability) properties, dose requirement, physiological limitation of the injection site, and the drug clearance rate to determine the formulation feasibility. After the administration route, dosage form, and the target pharmaceutical product profile are determined, an in silico PK model is developed based on the pharmacokinetic parameters of an IV bolus or oral IR dosage form; and then the corresponding desired drug release kinetics and dose regimen can be determined by the pharmacokinetic simulation using the developed PK model, wherein the drug plasma levels should be controlled within the known therapeutic window. Emphasis should be placed on understanding absorption characteristics of the active drug in the injection site as well as the stability of the active drug during the dosing interval. The local absorption characteristics of a compound in the injection site and the duration of drug release are the most important parameters in assessing the feasibility of LAI dosage forms. Attention should be paid to the effect of a different injection site on absorption rate due to blood flow, pH, enzymes, macrophage uptake, and other factors. Drug absorption often differs in different regions of the human body.

Once technology feasibility is determined, prototype formulations using appropriate LAI technology can be developed and evaluated by a physiological-relevant in vitro release method and by stability-indicating assay methods. Selection of an LAI technology should be based on dose, release duration, drug properties, drug release or absorption rate, IP landscape, and the commercial viability of the technology. Factors that affect the dosage form performance, such as drug loading, process parameters, release mechanism, polymer degradation, and drug stability, ideally need to be evaluated by a DOE design. Because drug-release testing is the most important among other characterization methods, development of in vitro release tests and its relationship with in vivo performance [in vitro in vivo relationship (IVIVR) or correlation (IVIVC)] is highly desirable for quality control of LAI dosage form during development, scale up, and technical transfer. An IVIVC can be established by correlation of the in vitro release rate of the prototype formulations of different release rates to in vivo bioavailability study, until a formulation with acceptable in vivo performance is identified.

Drug crystal suspensions, liposomes, and polymeric microparticles are the most commonly LAI dosage forms. Implants, oils suspensions, and in situ polymeric gels are also available in the market.

Nano/micro-crystals are composed of mainly hydrophobic drug with a small amount of excipient or surfactant, and different kinds of hydrophobic drugs can be formulated into crystals suspension with high-loading and encapsulation efficacy.  Micronization and nanomilling is widely used as a common formulation method for sparingly soluble compounds. The saturation solubility of the nanocrystals is highly related to the particle size, and solubility increases as particle size decreases due to the increased surface area, especially when the nanocrystals are below 300 nm.  In these suspension formulations, the rate-limiting step for drug absorption is the speed for drug particle dissolution in the formulation or in the in vivo fluid surrounding the drug formulation.

To increase the half-life, it is a widely accepted way for long-acting formulations to be transferred into a long-chain fatty acid. The parent drugs are usually synthesized into prodrugs through esterification. Due to their extremely low water solubility, this fatty acid ester of a drug dissolves slowly at the injection site following IM injection. With the help of in vivo hydrolase, the prodrug is hydrolyzed into the parent drug and becomes available in the systemic circulation. Several other factors, such as injection site, injection volume, and surface properties of the crystal, can also affect the overall pharmacokinetic profile of the drug.

Regarding LAIs, the FDA has approved Invega® Sustenna® for schizophrenia and schizoaffective disorder treatment in 2009. Invega Sustenna is a good example of an LAI prodrug formulation, and paliperidone palmitate is the prodrug of paliperidone palmitoyl ester. This LAI formulation is indicated as an injection once every 28 days following an initial titration period.  Olanzapine pamoate is another example of a poorly water-soluble salt form of olanzapine. Based on its extremely low water solubility, the drug dissolves slowly at the injection site following IM injection and is hydrolyzed to the parent drug. Once the ester is hydrolyzed intramuscularly, the parent drug becomes available in the systemic circulation.

Lipid-Based Nanoparticles
Lipid-based nanoparticles, such as liposomes as nano-pharmaceuticals are formed from phospholipids and cholesterol in aqueous medium. Liposomes have a spherical phospholipid liquid crystalline phase, and can be produced by dispersion of phospholipid in water by a mechanic energy, such as high-pressure homogenization or microfluidics.  This results in the formation of multilayer structures consisting of several bilayers of lipids.  After extrusion, these multilayer structures produce unilamellar structures that are referred to as vesicles.  Liposomes can entrap both hydrophilic and hydrophobic drugs, and drug release can be targeted to specific sites.  Biocompatibility, biodegradability, and low toxicity are the main advantages of liposomal delivery systems.  Because injected liposomes can avoid uptake by the reticuloendothelial system (RES), the particles remain in circulation for a prolonged period of time. Typically, the particle sizes of liposomes range from 50 to 200 nm.  To make liposomes suitable for therapeutic applications, their size distribution has to be controlled, which can be realized by passing them repeatedly, under elevated pressure, through membranes with defined pore size.

The concept of a liposomal drug delivery system has had a revolutionary effect on the pharmaceutical field, and its applications are now well-established in various areas, such as drug, biomolecules, and gene delivery.  Due to extensive developments in liposome technology, a number of long-acting liposome-based drug formulations are available for human use, and many products are under clinical trials.  Most commercially available liposomal drug formulations include Abelcet, AmBisome, DaunoXome, DepoCyt, DepoDur, Doxil, Inflexal, Marqibo, Mepact, Myocet, Onivyde, and Visudyne.

Two widely used liposome technologies include Stealth Liposome Technology and DepoFoam Technology. In Stealth liposome technology, a polymer (such as PEG) is incorporated into the liposome system that can improve the circulation of the dosage form inside the body.  DepoFoam Technology encapsulates drugs in multivesicular liposomes.  The multivesicular liposomes can sustain the release of drug(s) over the range of up to 30 days.  Upon administration, DepoFoam particles undergo drug release, erosion, and reorganization of the lipid membranes.

Polymeric Nano/Microparticles
Polymeric nano/microparticles possess the advantage of both sustained release and improved stability – both in storage and in vivo application.  For polymeric particles, the drug is entrapped within the polymer matrix, usually a biodegradable polymeric matrix. Polymer nano-medicines typically fall into one of two categories: (1) polymer-drug conjugates for increased drug body half-life and bioavailability, and (2) degradable polymer architectures for controlled-release applications.

Drug-polymer conjugate nanoparticles can be phagocytosed by the macrophages of the liver and spleen shortly following IV injection.  The nanoparticle clearance is mediated by adsorption of blood components to the surface of the particles, namely opsonization.  Their application has spanned the full nanomaterial size-scale, from single polymer chains up to large aggregates, depending on the required therapeutic outcome.  To realize long-acting attributes, the polymeric nanoparticles can protect the drug from degradation, thus achieving prolonged drug delivery and a longer shelf-life.  For therapeutic purposes, the most commonly used polymers include polyethylene glycol (PEG), poly(lactic acid) (PLA), poly(lactic-co-glycolic acid) (PLGA), poly(ε-caprolactone) (PCL), alginate, chitosan, and gelatin base. Commercially available injectable polymeric nanoparticle drug formulations include Adagen, Cimzia, Eligard, Genexol, Opaxio, and Zinostatin stimalamer.

Beyond just extending the circulation time of established drugs by drug-polymer conjugates, polymeric microspheres can be developed based on hydrophobic materials that facilitate controlled release of the therapeutic. This is achieved by using slowly degradation of microspheres polymer backbone that subsequently leads to kinetically driven release of the drug.  Long-established polymer microspheres that have had significant success are based on incorporation of leuprolide (a testosterone inhibiting drug) into polylactide (PLA) and polylactide-co-glycolic acid (PLGA) microspheres.

Oil-Based Injectable Suspensions/Solutions
Oil-based LAIs consist of lipophilic drugs in an oil carrier either as suspensions or as a solution. The duration of these long-acting formulations lasts from about 1 week to 1 month. Because the rate-limiting step for drug absorption is the dissolution or diffusion of drug in the formulation, controlling the viscosity of the oil carrier is used to prolong the absorption process. In many cases, prodrug of a drug is used to increase both hydrophobicity and lipid solubility of the compound in an oil-based parenteral solution, and the drug-release rate from oil solution is controlled by the drug partitioning between the oil vehicle and the fluid surrounding the injection site. Several other factors, such as injection site, injection volume, the extent of spreading of the depot at the injection site, and the absorption and distribution of the oil vehicle, will so affect the overall pharmacokinetic profile of the drug.

Pellet Implants
Pellet implants could be another LAI therapy that is easy to administer, provide reliable levels, and are affordable. For example, long-lasting testosterone pellets, Testopel, were approved by in 1972 to replace the IM injection suspension in the market. Testopel contains crystalline API and is formulated as 75-mg pellets. The pellets are surgically placed in the subcutaneous space, and the long-acting effect for up to 1-3 months is controlled by slow dissolution of the drug in the implant site.

Due to the advantages of parenteral sustained-release drug delivery in enhanced patient compliance and overall reduction of medical care cost, LAI delivery systems have gained popularity in patients with chronic diseases.  Moreover, these unique features in protecting compounds or biologicals from degradation and increasing the duration of drug release offer potential application of LAIs for use in the delivery of potent small-molecule compounds, peptides, RND/DNA, and proteins. 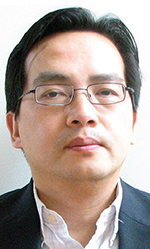