There are many misconceptions when it comes to consider­ing the best way or format to consume cannabidiol (CBD) and get the maximum benefit. Formulation scientists need to consider several factors when developing new formulations of nutraceuti­cal ingredients, especially botanical ingredients and natural ma­terials from various sources. One of the first considerations is the purity of the ingredient along with its physicochemical properties, such as solubility, density, flowability, and stability. Botanicals and naturally sourced ingredients are complex and often can contain multiple chemical components, not to mention several classes of compounds. The physical, chemical, and sensorial properties of botanical extracts from different sources can be remarkably vari­able, making it difficult to directly substitute one source for an­other in a finished formulation.

The properties of the botanical active can have a direct bear­ing on the type of dosage form into which it can be formulated. For example, if the ingredient is an oil or wax versus a water-sol­uble material, it may not be easy to formulate into tablets or cap­sules. Similarly, ingredients with a large serving size may have to be delivered as a powder that is mixed into water for easy con­sumption. Hemp extracts are a good example of botanical ingre­dients, where along with the major cannabinoid CBD, there may be some THC (<0.3%) and minor quantities of many other cannabinoids as well as terpenes and flavonoids. The lipophilic extracts pose significant formulation challenges that must be ad­dressed so that a safe, efficacious, and palatable product is avail­able for consumers. The efficacy of any supplement is based on a sound understanding of its bioaccessibility and, more impor­tantly, bioavailability.

Cannabinoids are extracted from the hemp plant biomass in a series of steps involving solvent extraction, filtration, and fi­nally distillation to arrive at CBD distillate. The distillate is then further processed to produce either full spectrum, broad spec­trum, or isolated single cannabinoids. Reproducibility of the whole plant extracts or full spectrum products may be challenging be­cause of the difficulty to control variables, such as harvest to har­vest variation and extraction process or formulation differences.

So called “THC-free extracts” may contain some minor cannabinoids, terpenes, flavonoids, and other trace ingredients. Broad spectrum CBD has no THC but may comprise some minor cannabinoids and terpenes; however, there is no rigorous defini­tion of what the composition should contain. Lastly, there is pure CBD often referred to as CBD isolate. Pure CBD is a white to off-white crystalline powder. CBD in its unpurified form (full spectrum or broad spectrum) may exist as a resin, wax, or oil, depending on what other plant constituents are present. From a consumer perspective, the unpurified CBD is typically dissolved in oils, such as medium chain triglycerides or other vegetable oils.

Recently, it has been reported the THC (a psychoactive cannabinoid) content of many CBD tinctures is much higher than expected. This can place consumers in the precarious position of being unexpectantly intoxicated or potentially failing drug tests.

Understanding how the physicochem­ical attributes may affect the bioaccessibil­ity and hence the bioavailability is also critical to developing and delivering a safe and effective dietary supplement.1,2 Water-soluble components are easier to work with and can fit with a variety of delivery formats. Conversely, poorly soluble or in­soluble ingredients present a significant challenge.3,4 A particularly challenging subset of ingredients are fat-soluble or lipophilic materials that must be formu­lated carefully to attain optimal absorp­tion. Bioaccessibility is the first step in the process of a compound or nutrient becom­ing bioavailable. In this step, the com­pound or nutrient is first released from the delivery system, which can be a food ma­trix such as a gummy, or a swallowed dosage form, for example, a capsule or tablet. Many digestive steps from chewing to mixing with acid and enzymes in the gastric juice are involved in the process of making bioactives and nutrients bioacces­sible. Once released from the delivery for­mat, the bioactive or nutrient should then be available to the body in a form suitable for absorption.

The oral bioaccessibility and bioavail­ability of lipophilic bioactives has been shown to be enhanced when the waxy or oily ingredient is formulated into an emul­sion. The composition of said emulsion, ie, lipid and emulsifier types used, as well as the key physicochemical attribute of emul­sion droplet size have a direct impact on the release from the dosage form. These attributes also have a bearing on the ulti­mate solubilization, transport, metabolism, and absorption in the gastrointestinal tract (GI) and can affect distribution to the lym­phatic system.

It is clear from the work of Ger­shkovich et al that the lymphatic absorp­tion of CBD is critical to attaining superior blood levels.5-7 This is not unexpected given how other oily nutrients have been formulated.3

The absorption of many lipophilic nu­trients and bioactives are affected by food intake, this is called a food-effect-related absorption factor. In multiple food-effect studies, it has been reported the amount of CBD absorbed increased approximately four-fold when it was consumed with a high-fat meal, compared to fasting condi­tions.8

FORMULATION OF CBD TO IMPROVE BIOAVAILABILITY

As previously mentioned, CBD, THC, and other minor cannabinoids are lipophilic compounds and hence need to be formulated appropriately to achieve reasonable levels of absorption especially via the gastrointestinal tract. This is impor­tant as most consumer CBD offerings are formulated as oral products either as tinc­tures, gummies, capsules, tablets, softgels, or in beverages. It has been shown that unformulated CBD has extremely low bioavailability (less than 5%), while dissolv­ing CBD in oils such as the MCT or sesame oil can increase bioavailability to between 6%-13%.9 The most significant increase in the bioavailability of CBD has been achieved when the cannabinoid has been formulated into a system in which the lipophilic material is encapsulated by hy­drophilic ingredients. These formulations can involve various technical approaches, such as micro- or nano-emulsions, self-emulsifying systems, liposomes, micelles, or other complexes, such as those with beta cyclodextrins.10 This may be achieved using natural ingredients and emulsifiers while some methods require inclusion of synthetic materials, such as some SEDDS (self-emulsifying drug delivery system) for­mulations. The CBD formulations with enhanced bioavailability are often referred to as water-soluble or water-miscible for­mats. There has been a considerable amount of preclinical and clinical research on how these emulsified formats enable superior cannabinoid absorption.10-13 However, there is still work to be done to better understand the effect of emulsion droplet size and formula constituents on the bioavailability of CBD.10,15

Once the CBD or hemp extract has been successfully formulated to be more bioavailable, it must then be incorporated into a consumer-friendly delivery format consumers are familiar with, such as gum­mies, capsules, tablets, and powders.

It is important to recognize that oil-based CBD formulations, while normally being synonymous with tinctures or soft­gels, may also be incorporated into gum­mies and other edible formats. So, one should not equate the finished delivery for­mat with any expected level of perform­ance in terms of bioavailability. What is critical to achieving the optimal bioavail­ability is that the lipophilic cannabinoid material is first formulated into a compo­sition that lends itself to being absorbed within the human GI tract. Some absorption-enhancing technologies are more flexible than others, ie, they are available in both liquid and solid formats, enabling the formulation of a wide variety of fin­ished dosage forms.

When it comes to having confidence in the bioavailability of a CBD formulation, there is no substitute for human bioavail­ability data. There have been several human pharmacokinetic studies com­pleted on commercially marketed con­sumer CBD products.11,13,14,16

In the past 3 years, several pharma­cokinetic studies on commercial CBD for­mulations have been carried out by independent academic researchers.13,14,16 The pharmacokinetic learnings from these studies are several. First, pure CBD pow­der or CBD dissolved in oils are signifi­cantly less bioavailable that emulsified CBD formulations, see Figure 1 taken from the recent pharmacokinetic study.16 Sec­ond, for CBD emulsions the choice of the natural emulsifier as well as the emulsion droplet size can affect the bioavailability. Finally, it was found there is a noticeable increase in the bioavailability of emulsified CBD formulations when taken with food, see Figure 2 taken from the same phar­macokinetic study.16 This outcome is not dissimilar to the food effect observed with oil-based solutions of CBD.17,18 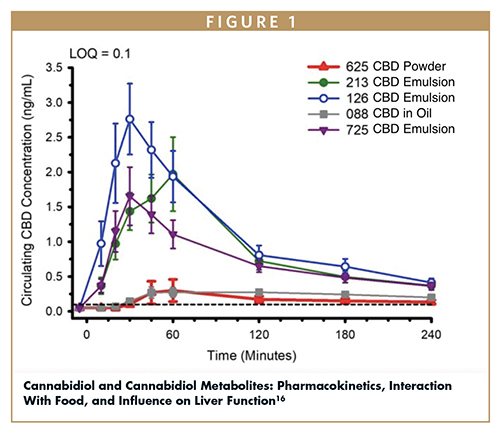 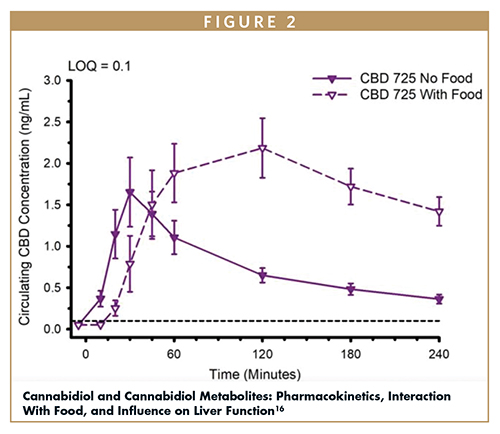 There are several misconceptions around CBD and the formats best suited to its administration; some of the major ones are discussed here. First, CBD is not an oil as has been widely reported in the media, rather it is a crystalline powder as mentioned earlier. Because of CBD’s lipophilic property, it is soluble in many oils but not in water; this led to early formula­tions, such as oil-based tinctures or softgel capsules.

It has also been frequently communi­cated that CBD tinctures are absorbed in the buccal cavity or via sublingual admin­istration. However, it is suggested that little if any cannabidiol is absorbed through the buccal mucosa.19 The only instance in which sustained buccal delivery of a lipophilic active such as cannabidiol was achieved was using an occlusive buccal adhesive patch technology.20 The cannabidiol was reported to absorb into the buccal tissue and eventually achieved clinically relevant plasma levels; however, the rate was deemed to be relatively slow and not suitable for an immediate- release delivery system.

There has been a wide array of water-soluble or more appropriately termed water-miscible products entering the CBD market throughout the past several years. Claims that nano-emulsions or dispersions of one form or another have superior bioavailability have become common­place. However, there is little in the way of preclinical or clinical testing in human sub­jects to support these claims. It may be possible there is an optimal sub-micron emulsion droplet size that results in im­proved bioavailable and that smaller is not always better.21

Consumers seeking benefits from CBD and other cannabinoid products should look carefully at the formulation to determine which product may be best for them. The best scenario is that the manu­facturer can refer to studies carried out on its products in a human population.

Many consumer CBD products refer to the number of milligrams of ingredient, which may lead consumers to believe that higher labelled levels of CBD will address their particular concerns. Recent pharma­cokinetic studies have highlighted signifi­cant variance in CBD blood levels based on product formulation in which a prop­erly formulated product can be several times more bioavailable than a simple oil-based solution. Selecting a CBD product on the basis of proven bioavailability rather than the number of milligrams listed per serving or per container may be a more reliable approach to achieving a sat­isfactory outcome. 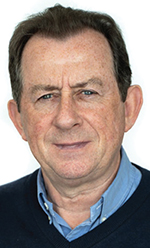 Dr. Gerry McNally is a seasoned consumer healthcare R&D executive with more than 25 years of experience as an R&D leader in the consumer healthcare industry. During his tenure at McNeil Consumer Healthcare and Johnson & Johnson, he was instrumental in leading the development of numerous innovative and highly successful products and launching multiple novel drug delivery technologies. He was involved in creating unique formulations for Imodium® Multi-Symptom Relief, and Pepcid® Complete and novel formats, such as Tylenol® Rapid Release Gels. He earned his PhD and BSc Hons. in Chemistry from University College Dublin, Ireland. He holds more than 30 patents in the field of drug delivery/pharmaceutical formulation, has authored several papers, and delivered presentations at industry conferences.