The US Patent and Trademark Office awarded Dr. Thomas B. “Brad” Gold a patent for his application, Coated Tablets With Zero-Order or Near Zero-Order Release Kinetics. The intellectual property centers on formulation development technology that allows for the steady, continuous release of API over a particular duration of time to mitigate variations or spikes in therapeutic benefit.

The zero-order dissolution release profile was achieved by combining no more than five tablet excipients, one of which was the highly soluble API in very low concentration, another being the tablet lubricant, and the application of a very thin film-coat layer. Release rates of greater than 20 hours were achieved as demonstrated with in vitro dissolution testing. The following describes the technology behind that patent.

Attempting to achieve specific modified-release rates of any API poses many challenges. These challenges may be more difficult when dealing with variables such as low-dosage strength, highly soluble actives, and a desired zero-order/near zero-order dissolution release profile. Likewise, bioavailability of the API may be compromised when attempting to modify release of the API due to factors such as gastric retention or bypassing the absorptive “window” of the duodenum.

Many products use traditional methods of formulating for extending delayed-release actives out to 16 hours. These traditional formulation methods may be composed of a hydrophobic matrix ingredient in the tablet core and the application of a heavy tablet coating, typically methacrylate or cellulosic in composition.

Alternative traditional formulations rely on the coating layer to provide the majority, if not all, of the impact on the dissolution release rate and profile. Other products use specialty processes or patented technologies to achieve desired release rates and profiles.

Currently, there are few marketed products that achieve a zero-order/near zero-order in vitro dissolution rate. These products achieve zero-order release profiles by means of osmotic agents, ie, a bi-layer tablet in which one half controls the hydration rate of the tablet and the other contains the API – and both of which are protected by a thick film coating and physical intervention such as laser scribed holes. Moreover, these products are costly to produce and require special equipment, and consequently, the cost is passed along to the end consumer.

There exist several means by which zero-order/near zero-order drug delivery rate has been achieved. Currently marketed products include simple matrix system tablets relying on cellulosic excipients in combination with a functional coating layer, multiparticulate systems, and osmotic systems that employ excipients, mechanical means, devices, or a combination of any.

Multiparticulate Systems
Capsugel Dosage Form Solutions has developed osmotic-bursting multiparticulates with a barrier-coating option to approximate zero-order release. With this, drug release is controlled primarily by manipulating coating type and weight. In this approach, one still sees a release lag based on barrier coating weight, followed by pulsatile- to-short controlled-release durations. As with most osmotic dosage forms, it is touted as having relative insensitivity to environmental pH and relative insensitivity to sweller-layer thickness or drug properties.

Others have developed miniaturized osmotic pumps composed of multiparticulates that possess semipermeable membranes combined with osmotic agents or “flux regulators” that push drug out of miniature pores.

Osmotic Tablets
Osmotic drug delivery systems are valuable in their ability to release API without being affected by many microenvironmental factors. Additionally, this technology is suitable for a number of types of deliverables, including solubles, insolubles, large or small molecules, lipids, and peptides, to name a few.

Pioneers for this type of delivery vehicle have come from institutions such as ALZA Corp. ALZA has successfully produced several osmotic pump delivery systems, in addition to their more well-known OROS® technology. Shire Laboratories’ EnSoTrol® platform utilizes several strong solubilizing and wicking agents in conjunction with semipermeable coating membranes to produce a pressure gradient across the coating layer. Andrx developed the CPOP/Portab system, which relies on a drilled orifice as the location of drug release. Water transport across the semipermeable membrane builds osmotic pressure within the tablet, and the API is leached out at a constant rate through the orifice.

Both formulations consisted of no more than five excipients in the tablet core followed by the application of a thin film coating.

The release rate was designed to offer the drug out to 12 hours; however, it also can be extended well out to 20+ hours. In addition to being very easy to make/formulate, these tablets employ traditional tableting methods and require no specialized technology. As the trend toward once-daily dosing continues, the need for controlled-release tablets grows. This helps ensure patient compliance with taking medications as well as quality-of-life benefits, and ultimately aids consumer market acceptance.

Preparation of the Core Tablets
Core tablets were prepared from a matrix of API (X), polyethylene oxide (PEO) of varying molecular weight ranges, Kollidon SR, dicalcium phosphate, and sodium stearyl fumarate. The API was pre-blended with dibasic calcium phosphate in a high-speed vertical shaft mixer. The pre-blend was combined and blended with the remaining excipients in a V-shell blender. The final blend was then compressed into tablets at a hardness of ~4-5 kp.

The tablets were coated in a perforated pan coater with a 15-inch pan insert, using an aqueous ethylcellulose dispersion, to a minimal weight gain of 3% to 5%. Dissolution testing was performed on both core tablets and coated tablets using USP Apparatus I (baskets) with standard pH 6.8 phosphate buffer as the dissolution media. Samples were removed at 1-, 3-, 6-, 9- and 12-hour time points after the introduction of the tablets to the media, and were analyzed using reverse-phase HPLC for the concentration of API released.

Tablet Description
Each 1-mg film-coated tablet was 5.6-mm round standard concave in shape, white to off-white in color with a total tablet weight of 78 mg. Shown in Figure 1 are the uncoated core, 3% coated, and 5% coated tablets, respectively. 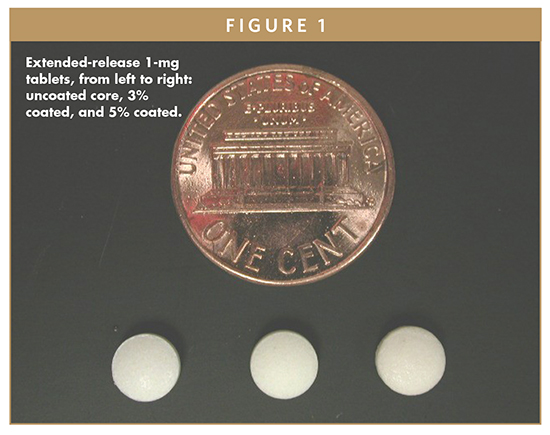 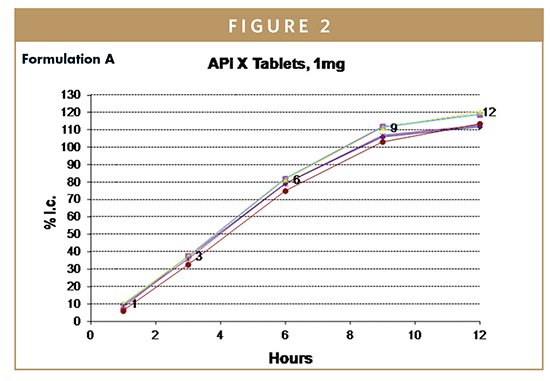 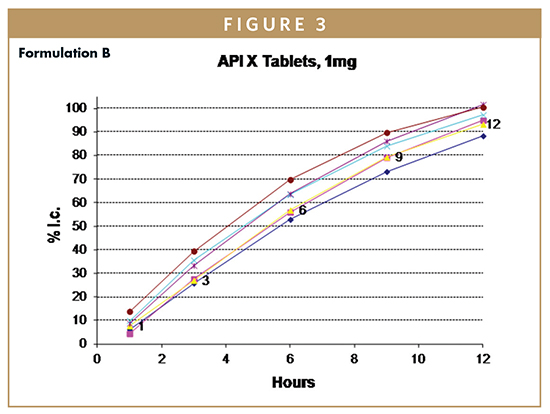 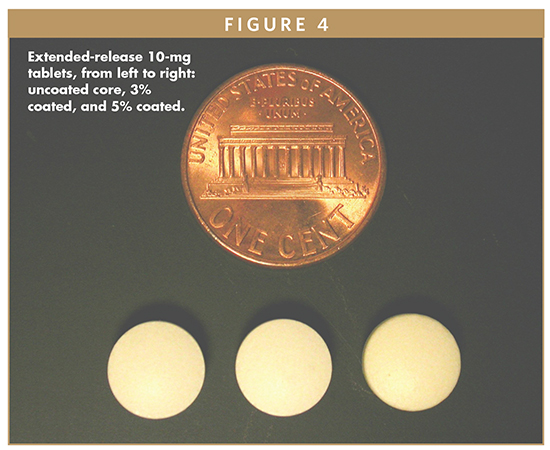 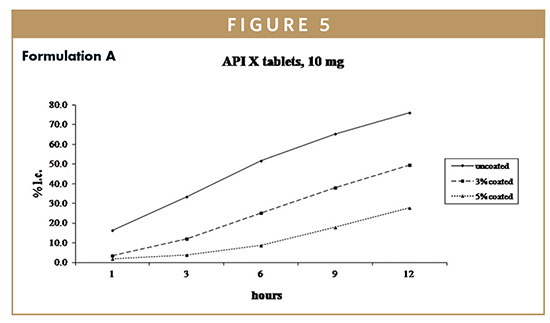 Formulation A was a combination of two molecular weights of PEO, formulated in a specific ratio determined to be most beneficial for the release of API. Formulation B was a combination of one grade of PEO and Kollidon SR. When in contact with water, PEO hydrates rapidly and forms a gelatinous barrier layer around the wetted tablet. Drug release occurs by diffusion of the API through the gel layer and/or by gradual erosion of the gel, exposing fresh surfaces containing drug to the dissolution medium. Diffusion is the dominant mechanism controlling the release of water-soluble actives, and erosion of the matrix is the dominant mechanism controlling the release of water-insoluble actives. Typically, however, drug release occurs by a combination of these two mechanisms. Kollidon SR is primarily hydrophobic and exhibits diffusional-based drug release when used with the PEO system. The coating layer is pH independent, thus eliminating the need for specialized coating development. The release rate was designed to offer API X out to 12 hours; however, it also can be extended well out to 20+ hours. These tablets are very easy to manufacture and formulate, employ traditional tableting methods, and require no specialized technology.

Sustained-release tablets typically offer dissolution profiles that resemble first-order release kinetics. However, there is a growing need for the development of dosage forms that offer release rates that are zero-order (linear over time) or near zero-order. Tablets with this release rate are desirable for their ability to maintain blood levels throughout a greater time span in an in vivo environment.

Currently, there are several marketed products that offer zero-order release rates. These products are available in the form of patented devices or a result of bilayer coated tablets or use physical means of controlling the release rate, such as osmosis or laser-drilled holes. This new technology offers development partners an option that is much less expensive and easier to work with than current technologies. 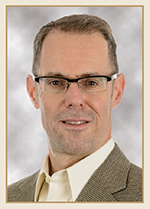 Dr. Thomas B. “Brad” Gold serves as Vice President of Pharmaceutical Development at Metrics Contract Services, where he is responsible for fast-track development, clinical batch manufacture, scale-up, and commercial validation of solid oral dosage forms. A contract pharmaceutical industry veteran of 20 years, Dr. Gold recently was awarded a US patent for a zero-order release kinetics coated tablet, which provides osmotic-like delivery benefits without the accompanying manufacturing challenges. Prior to joining Metrics, he held scientific roles at DSM as a group leader and Banner Life Sciences as scientist and pilot plant manager. At the latter organization, he led the start-up of a business unit focused on early phase development and clinical supplies manufacture of soft elastic gelatin capsules. Dr. Gold earned his PhD in Pharmaceutics from the University of Kentucky, from which he also earned his MSc in Chemistry. One area of his expertise is the prediction of crosslinking and drug dissolution rates using near-infrared spectrophotometry.