Since the discovery of insulin and its therapeutic application to the treatment of diabetes early in the 20th century, proteins and peptides have held enormous attraction as potential therapeutic agents. Many peptides demonstrate high potency and selectivity while exhibiting essentially no chemical toxicity as they metabolize to naturally occurring amino acids. In spite of the many attractive aspects of peptides and proteins as potential therapeutics, their susceptibility to denaturation and hydrolysis in the gastrointestinal tract has necessitated administration by injection, and this remains their major shortcoming as drugs. As a result, while the range of clinical indications for therapeutic peptides and proteins is substantial, the actual number of such therapeutics in general use today, though growing, is quite small compared with the number of chemically synthesized orally bioavailable small molecule drugs.

Literally dozens of excipients have been tested as potential enhancers of transmucosal absorption in the hope that alternate non-invasive means of administering peptides and proteins might be achieved. Some examples are shown in Table 1. The majority of these excipients have proven to be damaging to mucosal tissue upon repeated administration, especially at concentrations high enough to achieve a substantial degree of transmucosal absorption enhancement. The few exceptions, which include chitosan, various cyclodextrins, EDTA, and propylene glycol, have been found to be generally well tolerated, but not substantially effective as absorption enhancers. 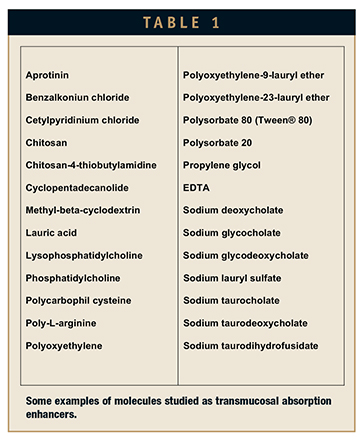 Certain alkylsaccharides were found by scientists at the University of Alabama Medical Ctr., Birmingham, to significantly increase transmucosal absorption of peptides and proteins up to about 30 kDa in size, as well as poorly absorbed small molecule drugs, allowing non-invasive delivery via the intranasal, oral, and buccal administration routes.1-4

These same excipients have been shown to effectively prevent aggregation during manufacturing and in final formulations and may serve as non-oxidizing and non-damaging replacements for polysorbates in biotherapeutic formulations.5

Alkylsaccharides composed of disaccharides and alkyl chain substituents with lengths between 10 and 16 carbons have been shown to be among the most effective transmucosal absorption enhancers for peptides, proteins, and small molecule drugs. Two classes of alkylsaccharides in particular, alkylglycosides, most notably tetradecyland dodecyl maltoside, and alkyl esters, especially sucrose monododecanoate (Figure 1), have been found to be particularly useful and effective, combining unmatched absorption enhancement with a high degree of safety and lack of toxicity. More recently, they have been demonstrated to be highly effective in preventing peptide and protein aggregation and stabilizing proteins against denaturation under conditions of elevated temperatures andmechanical stress.6 The alkylsaccharides of interest happen to be designated as GRAS (Generally Recognized as Safe) substances for food applications although not specifically for pharmaceutical use.7,8 For absorption enhancement, they function by allowing controlled transient mucosal permeation by both paracellular (tight-junction) and transcellular routes.2,9 For aggregation prevention, they function like other surfactants in covering exposed hydrophobic sites prone to aggregation and presenting a hydrophilic face in their place. Once administered, they metabolize rapidly to the corresponding free sugars and fatty acids or corresponding long-chain fatty alcohols. The pharmaceutical grade of these alkylsaccharides manufactured under GMP in FDA-licensed facilities are designated as Intravail® or ProTek® excipients. The general characteristics of these specific alkylsaccharides are summarized in Table 2. 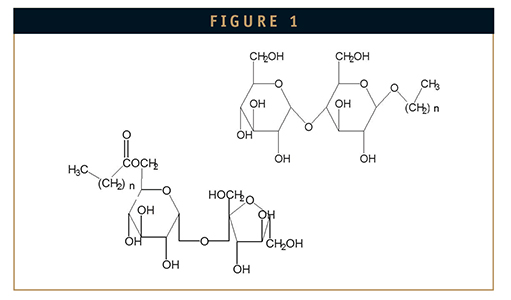 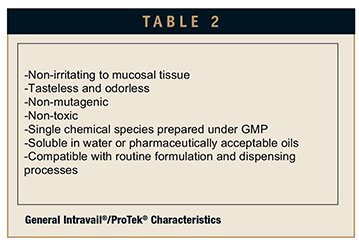 Alkylsaccharides circumvent the two primary limitations of intranasal drug delivery experienced in the past, namely mucosal irritation and poor bioavailability, and have been shown to be highly effective in increasing systemic absorption of nasally administered drugs. Published examples of absorption enhancement for proteins ranging from 4,000 Da to 30,000 Da in preclinical studies are summarized in Figure 2.1,2 For peptides and proteins up to approximately 20 kDa, intranasal bioavailabilities in excess of 50% compared with injection can be attained. For smaller peptides, such as calcitonin, bioavailabilities in excess of 95% are observed. 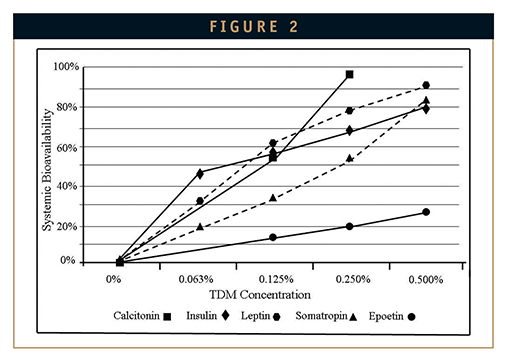 Human clinical studies conducted with PTH 1 to 31 and calcitonin, as well as with the small molecule drugs sumatriptan and diazepam yielded systemic bioavailabilities of 35% to 37% for the peptides and up to 96% absolute bioavailability for the small molecules.10-13 Improved non-invasive systemic absorption allows drug companies to embrace the broader use of peptides as commercially and clinically viable human therapeutics and promises to offer patients new, more convenient, and more effective therapeutic options across a broad spectrum of human diseases.

For companies with existing franchises in protein or peptide therapeutics, non-invasive formulations of existing injectables may provide a rapid path to regulatory approval and near-term increased revenues.

The use of alkylsaccharides in oral delivery of peptide drugs has only been demonstrated at the preclinical level. In studies by Grasso et al at Albany Medical College, the investigators demonstrated oral delivery of D-Leu-OB3, a linear 7- mer peptide with anti-obesity and anti-diabetes activity and octreotide, a cyclic 8-mer, with bioavailabilities in excess of 50% to 100%, respectively, compared to subcutaneous or intraperitoneal injection.14-16 Oral absorption of exenatide and pramlintide have also been recently reported.17,18

Protein aggregation is a principal cause of unwanted immunogenicity and immunogenicity of peptide therapeutics is a significant and growing concern of the FDA and EMA. In comments from the FDA Public Hearing on Biosimilars in May 2012, Richard Dolinar, MD, Chairman, Alliance for Safe Biologic Medicines stated: “Unwanted immunogenicity is the preeminent safety challenge associated with all biological therapeutics and can result in unexpected and sometimes severe adverse effects. Complicating matters, side-effects may only appear in patients after higher doses or prolonged duration of treatments and may be attributed to a number of patient-, disease-, or product-related factors.” The full testimony may be accessed online at http://www.safebiologics.org/pdf/FDA/ASBM-Testimony.pdf.

Determination of the immune response of new innovator biotherapeutics and biosimilars will have significant impact on the clinical trial and regulatory approval processes. To address these problems, surfactants are routinely incorporated into many biotherapeutic formulations to prevent aggregation, improve reproducibility upon reconstitution of lyophilizates, and prevent loss due to stickiness on filters, columns, and container surfaces.

The surfactant most commonly employed in biotherapeutics today is polysorbate 80. Polysorbate 80 has proven highly effective in preventing protein aggregation; however, it is subject to certain serious limitations that are becoming increasingly apparent to formulation chemists within the pharmaceutical industry as well as regulatory authorities. 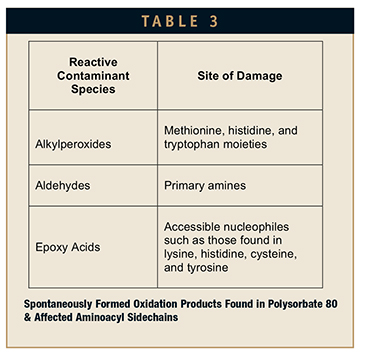 Polysorbates and other polyoxyethylene-based surfactants that contain ether linkages (polyoxyethylene moieties) and unsaturated alkyl chains spontaneously and rapidly autooxidize in aqueous solution to protein-damaging peroxides, epoxy acids, and reactive aldehydes. These chemically reactive species modify methionines, histidines, tryptophans, as well as any primary amines or accessible nucleophiles, such as those found in cysteine and tyrosine (Table 3), creating neoantigens that cause unwanted immunogenicity and in some instances promote re-aggregation. Unlike alkylsaccharides, which can be manufactured as pure single chemical species, polysorbates are mixtures of structurally related fatty acid esters of polyoxyethylene sorbitan. The principal fatty acids, lauric acid, and oleic acid, comprise up to 60% of the total fatty acid composition with esters of fatty acids of other chain lengths making up the remainder of the molecules.22 In addition to the oxidative contaminants previously described, commercial polysorbate preparations contain measurable amounts of polyoxyethylene, polyoxyethylene sorbitan, and isosorbide polyoxyethylene fatty acid esters.22-24 The structure of polysorbate 80 is shown in Figure 3. There is a great deal of lot-to-lot variation in the nature and content of oxidative species found in different polysorbate lots. For example, an analysis of 14 lots of polysorbate 80 from four different manufacturers showed a 26-fold range in hydroperoxide content (ie, from 290 nmole/g to 7,700 nmole/g; average: 1,807 nmole/g).25 The level of reactive contaminants in polysorbate preparations varies over time as autoxidation of polysorbates is spontaneousand progressive. This variability would seem to be a likely contributor to lot-to-lot variability in immunogenicity, which may crop up in post-market surveillance – undoubtedly a potential concern for biotherapeutics manufacturers. 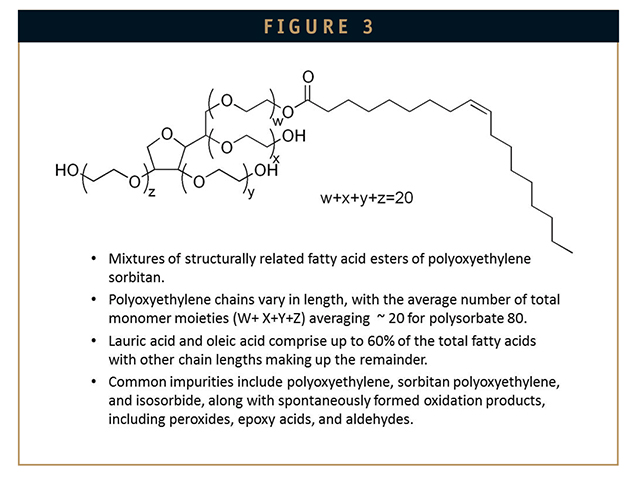 High purity preparations of polysorbate 80 treated to remove peroxides and packaged with oxygen excluded from the container headspace using nitrogen or argon are available commercially; however, oxidation resumes as soon as there is any contact with oxygen and the oxidation reaction accelerates once polysorbates are placed into aqueous solution. Typically, reactive species are detectable within 1 or 2 weeks following purification.

Measurement of residual reactive contaminants in biotherapeutic products is not meaningful because the reactive species are consumed in their reactions with the amino acyl side chains in forming neo-antigens. Thus, actual assessment of the degree of protein damage will require detection and measurement of the modified aminoacyl groups in the biotherapeutic over the course of time if it becomes necessary to assess the immunogenicity potential of each lot of a biotherapeutic prior to release into inventory.

Alkylsaccharides afford a possible alternative and are increasingly finding their way into biotherapeutic formulation work because they are highly effective in preventing protein aggregation, but are not subject to development of contaminating oxidative species. For example, the stabilization of recombinant human insulin (Humulin®R, Eli Lilly) at two concentrations of alkylsaccharide (ProTek® excipient) is shown in Figure 4. In each case, the protein was subjected to accelerated stress by continuous shaking at 150 RPM at 37°C for up to 90 days. The untreated Humulin is seen to begin denaturing in less than 1 day of constant agitation as measured by increased light scatter – a technique routinely used to measure protein aggregation. In contrast, the ProTek alkylsaccharide excipient at both concentrations tested prevented denaturation for the full 90-day test period of the study. The non-ProTek alkylsaccharide also tested in this study (an isomer with the same sugar and alkyl chain moieties), provided limited protection up to about 2 or 3 weeks. Similarly, increased stability of human growth hormone, beta interferon 1a, beta interferon 1b, pramlintide, parathyroid hormone 1-34 and 1-31(cyclic), monoclonal antibodies, and a linear 8-mer CCR5 inhibitor prone to rapid and severe aggregation has been demonstrated.26 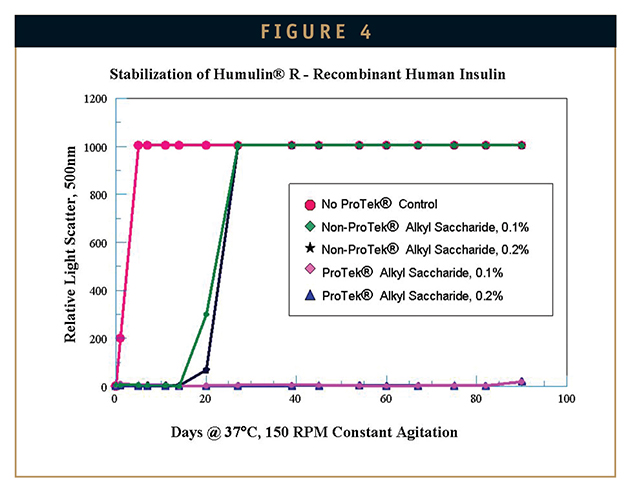 Alkylsaccharides offer exciting prospects for novel formulations, providing non-invasive delivery, stabilization, and immunogenicity reduction for biotherapeutic products. Non-invasive delivery of peptide and protein drugs will provide opportunities for broader patient acceptance and compliance with novel peptide therapeutics and may be expected to lead to an increase in the acceptance of peptide therapeutics as viable commercial pharmaceuticals.

Substitution of polysorbates with a suitable non-oxidizing alkylsaccharide surfactant could in effect yield biosimilars that are truly “biosuperior” to the corresponding polysorbate-containing innovator or biosimilar products with respect to no or low immunogenicity, increased stability, consistent and predictable efficacy, and extended shelf-life. As with any new excipient, there is a regulatory requirement for extensive preclinical and clinical studies to be conducted prior to regulatory approval. The extent of such studies (eg, type, duration, number of species) is determined by the FDA and depends on the mode of use (chronic or acute), frequency of dosing, and route of administration. Such studies are underway for some applications (eg, monoclonal antibodies), and we can reasonably expect that future research will be undertaken to discover additional alternatives to address theneed for aggregation prevention withoutconcomitant oxidative damage.

Dr. Edward T. Maggio is CEO of Aegis Therapeutics. He has been a founder and board member of seven public and private life science companies in the San Diego area and one in Copenhagen, Denmark. He earned his PhD from the University of Michigan and was an NIH post-doctoral fellow at the University of California, San Francisco (UCSF), Department of Pharmaceutical Chemistry. He is a member of the Advisory Board of the Polytechnic Institute of New York University, Department of Chemical and Biological Sciences; the University of California, San Diego, Dean’s Board of Advisors for Biological Sciences; the California State University, San Marcos, Biotechnology Programs Advisory Board; and the Industry Council of the San Diego Consortium for Regenerative Medicine; the Editorial Board of the Journal of Excipients and Food Chemicals, and a reviewer for the journals Diabetes, Obesity and Metabolism and Regulatory Peptides. Dr. Maggio has edited and co-authored a number of books and scientific articles in the biotechnology area and is an author of more than 60 issued and pending US and foreign patents.