The year 2012 was a good year for the industry, with a record 39 NMEs (New Molecular Entities) approved by the FDA. However, many experts believe this headline figure masks continuing issues with pipeline and productivity. Phase II clinical trial success rate for experimental drugs was just 22% for the 5-year period ending in 2011. Phase III was better, but still decreased to 65% from 70%. At the same time, the number of preclinical programs needed to produce a single new drug increased from 12 to 30.1 Pressure is therefore increasing for companies to pursue molecules with challenging profiles for further development. This is particularly true for many biological drugs in which a complex range of factors contribute to the stability profile of the molecule. A detailed understanding of these factors and the ability to control them is  crucial for developing long-term stable formulations.

The challenges of formulating a therapeutic protein are many, including a susceptibility to aggregation, oxidation, and surface adsorption; a particular challenge when formulating at extremely low doses. As the percentage of aggregation, oxidation, and surface adsorption in a formulation increases, the efficiency of the product decreases. In summary, formulators face real challenges in taking a protein and turning it into a viable therapeutic for the marketplace. In this article, we review some of the important factors involved, and highlight the advantages of including recombinant human albumin to stabilize protein therapeutics with reference to a recent case study. 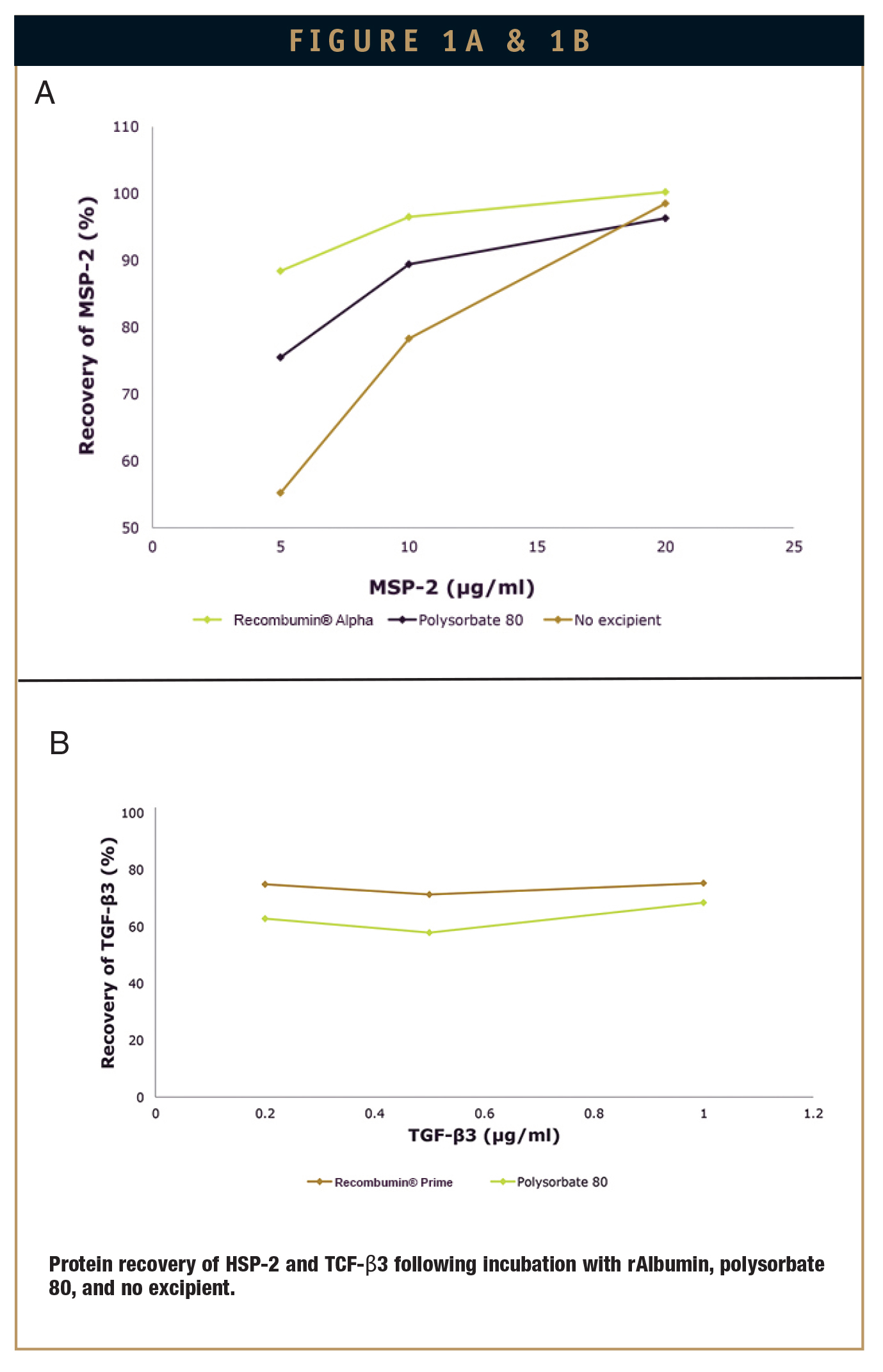 In order to stabilize, and therefore increase efficiency of protein drugs, formulators should aim to control aggregation, oxidation, and surface adsorption in their final products, among other factors. Two common techniques are used to achieve this. First, genetically engineering and altering the substance sequence with the help of detailed predictable algorithms and technologies. This can be an efficient solution, although such algorithms are not always available for the prediction of more complex small molecules, macromolecules, and peptides, all of which are becoming more and more common in today’s therapeutics.2

Optimizing the drug formulation by adding stabilizing excipients also provides a solution. However, many methods for stabilization require multiple excipients, such as human serum albumin (HSA), a variety of sugars, amino acids, and detergents (SADs).

HSA is the most common protein found in human plasma and is known for its ligand binding and contribution to the colloidal stability of the blood. The physical properties that allow albumin to carry out its biological function also make it the perfect stabilizer for many biological drugs, particularly in liquid formulations. In addition, the abundance and natural self-tolerance to albumin minimizes the likelihood of HAS eliciting an immune response in a given patient population.

The study discussed further explores the ability of two recombinant human albumins (rAlbumin) from Novozymes Biopharma to prevent and protect against surface adsorption, aggregation, and oxidation.

The binding of protein molecules to exposed surfaces can be a real issue for formulation scientists working with highpotency/low-dose drugs. Most proteins will adsorb non-specifically to primary packaging materials, such as glass vials leading to a significant reduction in available dose. Formulators can engineer these issues out of their final products by adding blocking agents to limit nonspecific adsorption.

Albumin’s high interfacial activity means it has the ability to prevent protein adsorption in low-dose formulations.4 To investigate the potential of Recombumin Alpha and Recombumin® Prime (Recombumin®) as a blocking agent, percentage protein recovery was measured following exposure to glass vials of either transforming growth factor β (TGF-β), often used in scarless wound healing, and merozoite surface protein 2 (MSP-2), the malarial vaccine antigen. Throughout the course of the investigation, Recombumin® was incubated at room temperature in a glass vial for 20 minutes in the presence of a phosphate buffer and either TGF-β or MSP-2. Protein recovery was then measured by reverse phase high performance liquid chromatography. As a comparison, the same method was followed using polysorbate 80, a widely used blocking agent in the formulation of protein products.

As shown in Figure 1, Recombumin® was the most effective agent in preventing non- specific binding to glass for both MSP-2 and TGF-β, causing significant reductions when exposed to the latter. Compared to polysorbate 80, Recombumin® was shown to reduce product loss to a greater extent in both cases. In the complete absence of a blocking agent, no TGF-β was recovered (not shown).

With huge potential for loss, reduced efficiency, and increased product immunogenicity, protein aggregation during product storage is a major concernfor formulation scientists. With FDA focus increasingly on regulating the number and size of particles present in formulations, it is important that formulators can control and reduce these numbers. This challenge particularly affects protein products formulated at high concentrations, as aggregation can be concentration dependant. HSA is an effective inhibitor of Aβ fibrillization, having been shown to bind to Aβ oligomers that are competing with Aβ monomers, preventing the growth of oligomers into larger assemblies.5

While evaluating Recombumin®’s ability to suppress fibrillization, MSP-2 was exposed to a freeze-thaw cycle known to induce fibril formation. This was repeated in the presence of various concentrations of Recombumin® dissolved in the buffer solution. After a single freeze-thaw cycle, the presence of fibrils was measured by the absorbance at 320 nm using RP-HPLC. When complete, results showed that the inclusion of Recombumin® noticeably reduced amyloid formation (Figure 2). 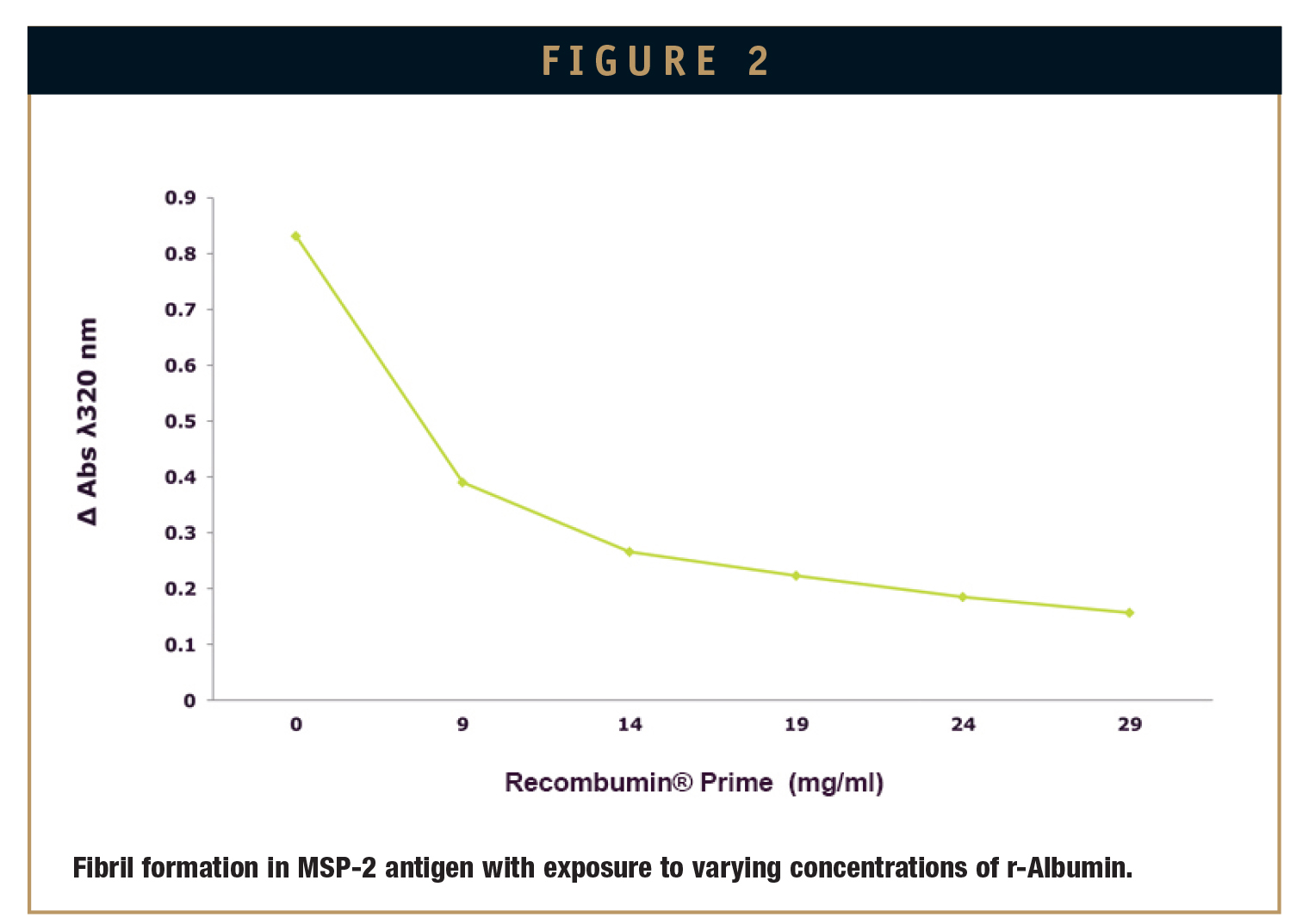 Using the same experimental model, commonly used excipients were tested and compared to Recombumin®. The other commercially available excipients tested were glycine, PEG 400, and polysorbate 80. In all cases, Recombumin® was shown to suppress aggregation of the MSP-3 antigen to a greater extent (Figure 3). 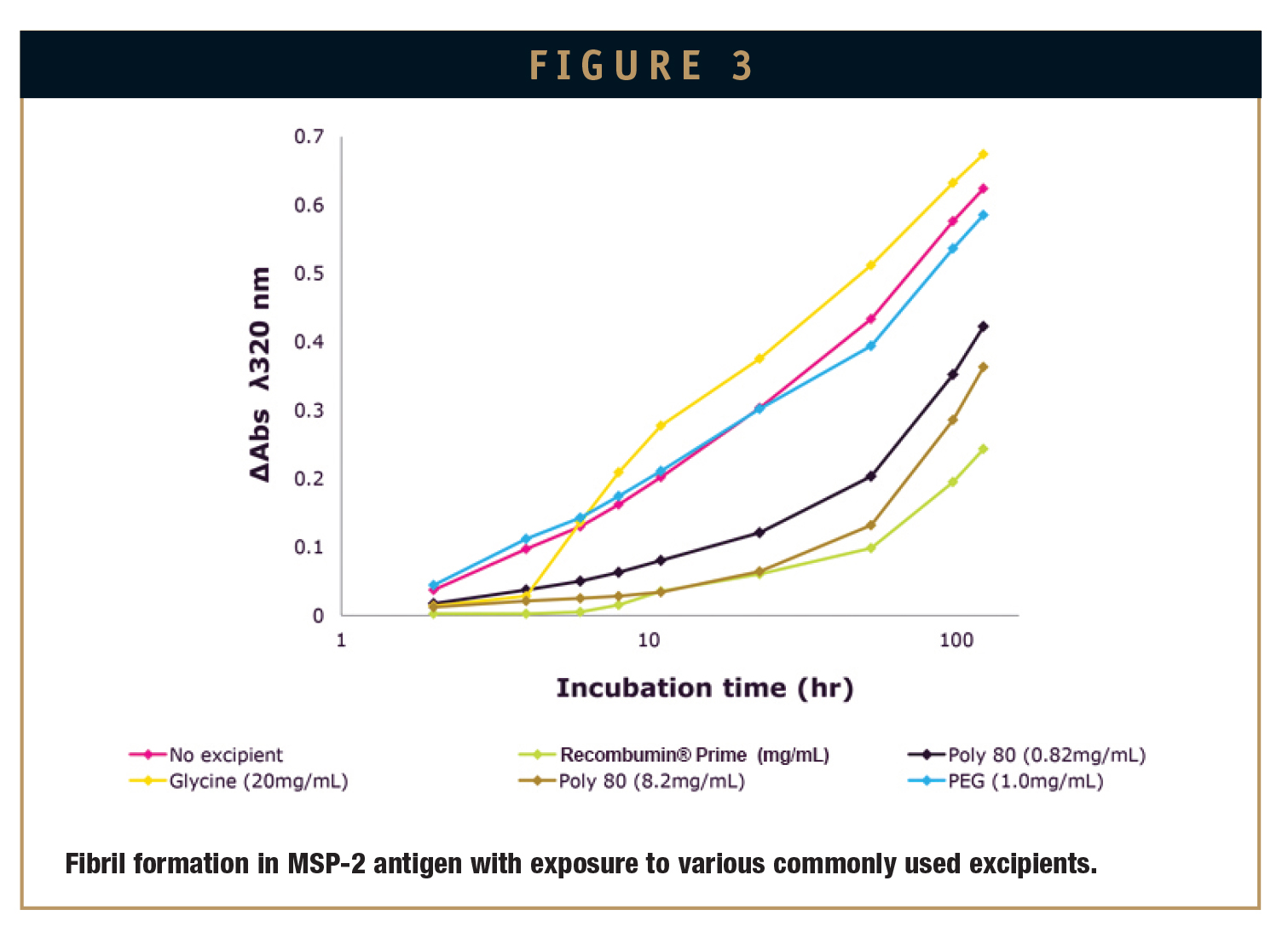 Oxidation of a protein drug product can lead to a range of functional changes, including altered binding activities, increased susceptibility to aggregation and proteolysis, increased or decreased uptake by cells, and altered immunogenicity. Oxygen (headspace), light, temperature, and the product’s physical state can all affect the rate by which oxidation occurs.

HSA has been proven to have an antioxidant function, due to both the single free thiol at position Cys 34 and to surface-located methionines. These act as scavengers for reactive oxygen and nitrogen species.6

To test the functionality of Recombumin® as an antioxidant, relevant conditions for protein oxidation were modelled using trace amount of the oxidizing agent hydrogen peroxide (H2O2). Recombumin® was dissolved in a buffer solution, and the protein products IGF-I protein (20 μg/ml) or MSP-2 (40 μg/ml) were then added to all samples, followed by peroxide treatment. The reaction was terminated with catalase, and the percentage oxidized measured by RP-HPLC. The same method was then followed using L-methionine as a comparison.

Figure 4 shows that the presence of increasingly concentrated Recombumin® significantly reduced oxidation of IGF-I or MSP-2. It was also shown that the oxidative protection of both protein products by Recombumin® was achieved at molar concentrations ten-fold less than that of L-methionine.

The study presented here demonstrates that Recombumin® is an effective multipurpose excipient, with the ability to protect protein products from aggregation, non-specific adsorption, and oxidation. The use of Recombumin® enables formulation scientists to simplify their strategies and reduce the number of excipients needed to stabilize a protein drug or vaccination candidate. As a result, less time is spent refining combinations of excipients, reducing production times, and promoting the creation of drug formulations that are more reliable for both manufacturers and patients.