Several formulation development challenges exist in the field of gastric-resistant film-coating. The functional polymer, poly(methacrylic acid-co-ethyl acrylate) (MAE), can react with some pharmaceutical actives (eg, omeprazole), and also with excipients (such as pigments or colourants) commonly used in enteric coating formulation development. Additionally, the selection of the correct plasticizer is important with respect to the optimization of film properties and process conditions. Plasticizer selection can also be further complicated by regional regulatory acceptance limits and maximum daily intake allowances.1,2

Film-coating ingredient incompatibilities with MAE can be eliminated by formulating a coating with just a plasticizer.3 This makes choosing the right plasticizer even more important. For these simplified, twocomponent formulations, characteristics, such as moisture uptake (eg, pellet or tablet) during the first 2 hours of dissolution testing, can be significantly influenced by the hydrophilic or lipophilic characteristics of the plasticizer selected.

This work was initiated to investigate the gastric-resistant functionality obtained by applying a clear, two-component MAE coating formulation onto a tablet sub-coated with a pigmented instant-release coating. The impact of hydrophilic and lipophilic plasticizers on the film characteristics of MAE-based coating formulations was also evaluated. Specifically, glass transition temperature, isolated film elasticity, and the water up-take of films and tablet cores were tested along with tablet dissolution.

Pigmented sub-coat trials were conducted on seven individual batches using a different Kollicoat® IR Coating Systems base coating color for each trial. Tablet cores were coated to a theoretical 3% weight gain. An equal number of tablets from each sub-coat trial were combined to form one batch for the enteric coating top-coat.

A Manesty XL Lab 01 side vented pan coater assembled with a 480-mm diameter drum insert and filled to a 3.5 kg batch size was used for all coating trials. Drum speed was varied between 12 and 22 rpm. An OptiCoat spray gun with a 0.8 mm orifice diameter was used at atomizing and pattern air pressures of 1.8 bar. All coating runs were conducted at a 55°C inlet air temperature with a 450-m³/h inlet air quantity and fluid delivery rate of 13 g/min.

Isolated films were prepared by spraying the dispersion onto a rotating Teflon roll while continuously drying to approximately 33°C with warm air (fan heater). The samples were made with an approximate film thickness of 100-150 micrometers.

A texture analyzer (TA-XT2i HR, Stable Micro Systems) was used to determine the mechanical properties of the film. The test was performed under controlled climatic conditions of 23°C and 54% rh.4

Dissolution testing (n=3) was conducted in a USP dissolution apparatus 2 for 2 hours at pH 1.1 (HCl, 0.08 mol/L; volume 880 mL) and 37°C (± 0.5 K) with a paddle speed of 50 rpm. The pH was then adjusted to pH 6.8 by adding 20 mL of a concentrated potassium phosphate buffer system and testing continued for additional 60 minutes. The drug release was determined photometrically via on-line measuring.

Determining the Water Uptake of Cores

Ten coated tablets were weighed and put into a filter bag. The filter bag was then placed into a beaker of hydrochloric acid (HCl, 0.08 mol/L) and removed after 1 and 2 hours in exposure. The tablet surfaces were dried carefully and weighed again for determining moisture uptake. 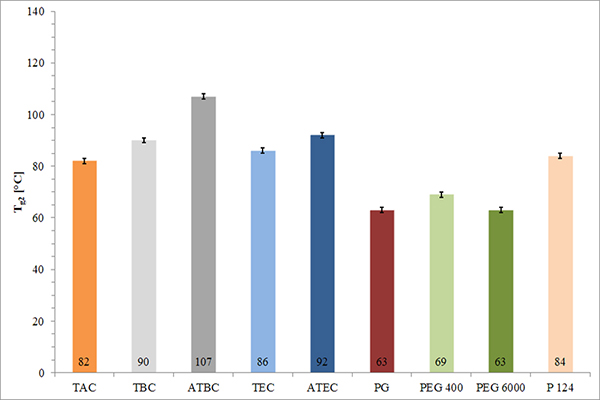 MAE inherently forms a very brittle, non-tacky film in a dry state due to its relatively high Tg of 113°C (± 2 K) Therefore, a plasticizer is needed to apply the polymer using standard pharmaceutical film-coating applications and conditions. The physical properties of the plasticized MAE films markedly depend on the character of the plasticizer. Hydrophilic plasticizers are preferred due to their more efficient incorporation within the MAE hydrophilic film matrix.5 It was found that the more hydrophilic the plasticizer added the lower the resulting Tg will be (Figure 1). However, even at a plasticizer content of 15%, the Tg remains above 60°C, resulting in non-tacky films at ambient temperatures.3

The hydrophilic properties of MAE allow water to act as a plasticizer, which is important to the film-forming process. As a result, minimum film-forming temperatures (MFFT) of < 0°C were measured in formulations containing only 10% TEC o TAC.5 Only a plasticizer concentration of 10% resulted in a brittle, cracked film immediately evident after the coating process. Plasticizer concentrations of 15%, 20%, and 25% were found to lead to suitably plasticized films. Interestingly, it was found that even a relatively high 25% plasticizer level resulted in a non-tacky film.3 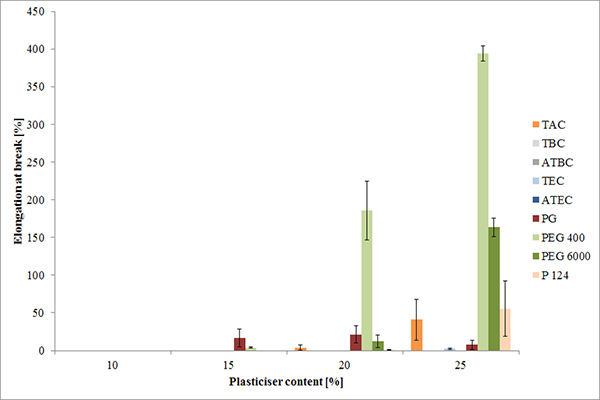 EaB as a measure of film elasticity can be used to appraise the risk of film cracking. It was found that both the type and concentration of plasticizer affect EaB values (Figure 2). Comparing the EaB results with those derived from DV measurement (Figure 3) revealed a correlation of water uptake and elasticity, which provided further support for the plasticizing effect of water. Furthermore, losses in weight indicate certain volatility of PG and at elevated temperatures for TAC.2,6 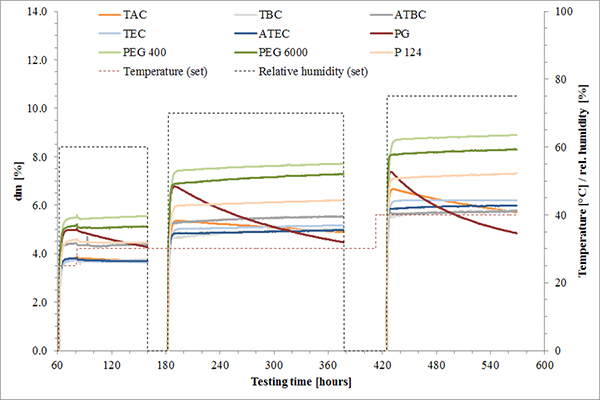 All films tested containing plasticizer concentrations of 15%, 20%, and 25% provided full enteric functionality. No dru release was found during the first 2 hours of dissolution testing. After altering the pHvalue to 6.8, immediate drug release with negligible lag-phase was observed. More importantly, drug release was found to be independent of the MAE coating level. Even the highest coating thickness of 12 mg/cm² resulted in the immediate release of caffeine.

The color appearance of Kollicoat® IR Coating Systems sub-coat was minimally affected by the application of the MAE topcoat, with Kollicoat® IR Sunset Yellow exhibiting the most noticeable change. The change in color appearance was found to be independent of coating level and plasticizer content. Gloss values also remained relatively unchanged with increasing MAE top-coating levels.3

In regard to the use of PEG 6000 as a plasticizer, earlier studies with polyvinyl acetate based Kollicoat® SR 30 D have revealed that the complete incorporation of PEG 6000 into the polymer depends greatly on product temperature (TP) during the coating process. Highly variable dissolution profiles were observed for tablets coated at different TP with formulated Kollicoat® SR 30 D.5

A similar phenomenon also occurred with Kollicoat® MAE 30 DP. White coating defects evident on the surface of MA coated tablets at a TP of 33°C are indicative of precipitated PEG 6000. However, this effect had no impact on the dissolution properties of these coated tablets. This is exhibited by the stable dissolution results seen with tablets stored for 12 months under climatic conditions (ICH). From these results, it is ascertained that PEG 6000 can be used as a plasticizer. The described effects that high concentrations of PEG (eg, in laxative applications) interfere with the gastric-resistant properties of MAE were found to be not relevant for this application.7 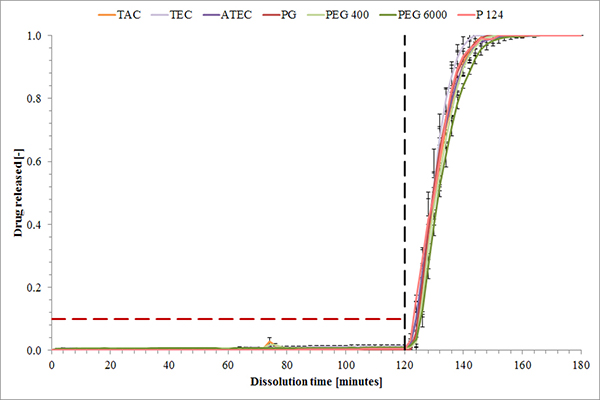 Eventually, all hydrophilic plasticizers tested led to the same dissolution profiles (Figure 4). Negligible drug release is seen in the first 2 hours of the testing in simulated gastric fluid across all coating levels, including the lowest value of 3 mg/cm². However, a fast drug release is observed over all enteric coating levels after altering the pH value to 6.8.

However, unlike hydrophilic plasticizers, different results were found with the lipophilic plasticizers TBC and ATBC. These lipophilic plasticizers were not incorporated into the MAE films as homogenously, and lead to a more porous coat. The increased porosity provides a conduit for active drug release during the first 2 hours of the dissolution testing. Improvement can be achieved by using a high shear mixer to prepare an aqueous micro emulsion of the plasticizer, which can then be added to the coating dispersion. To assure reliable gastric resistant functionality, a higher coating level of approximately 4 mg/cm² is recommended.2 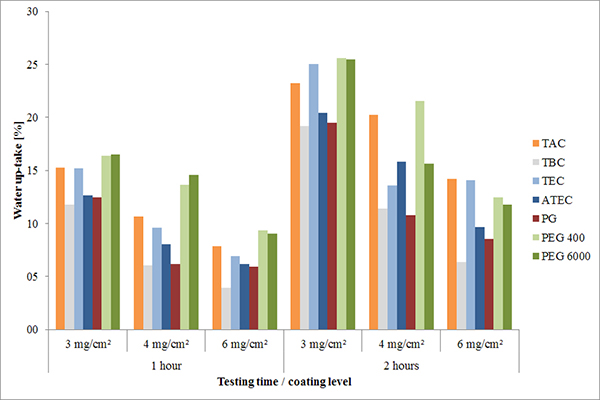 In a dry state, MAE inherently forms very brittle, non-tacky films due to its Tg of 113°C. As a result, plasticizers are required for successful coating applications. The hydrophilic and lipophilic plasticizers evaluated in this study reduced the Tg to only about 65-85°C, which is out of the range of acceptable film-coating applications. Therefore, as fully functional MAE-based gastric-resistant film-coatings are routinely formulated and coated at product temperatures of less than 30°C, it’s safe to assume that water acts as a plasticizer during the coating process as well.

A similar conclusion is derived when correlating the results of dynamic vapor sorption and elongation at break measurement: plasticizers that lead to a higher humidity up-take yield more elastic films.

Hydrophilic plasticizers, however, led to a higher water uptake during the first 2 hours of dissolution testing. If minimum water uptake is crucial to overall tablet integrity, lipophilic plasticizers should be selected. For instance, the use of tributyl citrate as a plasticizer in lieu of polyethylene glycol 400 can reduce water permeation during gastric-resistance testing by 50%.

The application of a pigmented subcoat and a colorless, functional top-coat is an easy method for preventing potential interactions between the API and the functional film-forming polymer. By formulating the functional coating by adding only a plasticizer to the polymer, the benefits of the pigmented coating systems (such as color matching) can be utilized as well.8

Applying MAE as a colorless top-coat not only provides an easy and efficient coating process, but also results in reliable drug-release functionality. By choosing the right plasticizer, the coating can be tailored for a particular dosage form. 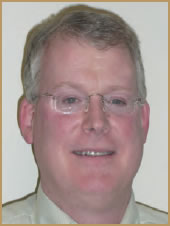 Philip Butler is the North America Technical Sales Manager for Coatings in the Pharmaceutical Ingredients & Services business unit, Care Chemicals Division at BASF. He graduated from Albright College with a BS in Biology, and started his career in the pharmaceutical industry at Teva Pharmaceuticals, where he worked in QA and Formulation Development for 4 years. Prior to joining BASF, he worked at Colorcon for 16 years in varying positions in the Technical Service and Sales departments. Mr. Butler joined BASF in 2008 as a Business Development Manager for Pharmaceutical Excipients applications and technologies in the areas of drug solubilization, controlled release, tablet compression, and coating. 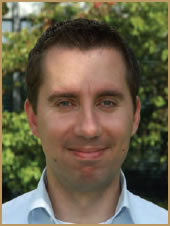 Thorsten Cech joined the pharmaceutical industry as a lab assistant in 1990. After gaining some years of experience in different departments of Knoll AG (BASF Pharma), he moved to the galenical development group of Soliqs in 1995. In this position, he was responsible for the development of solid oral dosage forms, with particular focus on pilot and production scale hot-meltextrusion technology. In 2000, Thorsten accepted a job opportunity at Boehringer Ingelheim Pharma GmbH & Co. KG. Being responsible for the formulation of OTC products, he supported the development of several solid dosage forms, nasal sprays, and syrups. After 7 years in galenical development, he started a work-study program in the field of process technology (with focus on pharmaceutical technology) at the University of Applied Sciences Bingen, receiving his Bachelors degree in 2007. Since 2005, he has been working for BASF SE in Ludwigshafen. As engineer, he is in charge of the European Pharma Application Lab. In his current position, he supports customers in Europe, West Asia, and Africa in regard to product application, formulation development, and process optimization. Further responsibilities are trainings and workshops.