To keep pace with pharmaceutical industry trends, drug de­velopers are looking to save time, improve efficiency, reduce cost, and respond quickly to market changes. Understanding the var­ious techniques of continuous manufacturing processes is critical to developing robust, stable drug formulations. The study of poly­mer behaviors in the presence of various adjuvants and flow aids plays an important role in formulation development, stability, ten­sile strength, and efficacy with respect to final dosage forms. This is especially true for controlled-release formulations.

Controlled-release tablets help improve patient compliance and therapeutic outcomes. These dosage forms last longer, which reduces dosage frequency. And, because the active pharmaceu­tical ingredient (API) is released more slowly, there is a decreased chance of noticeable side effects. Depending on the manufactur­ers’ desired drug-release profile, formulators have several ad­vantages to consider when developing controlled-release tablets.

Drug manufacturers can simplify the production of con­trolled-release tablets by using direct compression. Granulation is a time-consuming technique that, while effective, can lead to product cross-contamination and product loss during processing. In fact, granulation is more costly than direct compression in terms of both time and expense. Direct compression, on the other hand, is a simple and effective way to produce tablets. A manu­facturer can blend an API with excipients, followed by compres­sion, which makes the product easy to process. No additional steps, such as drying or sieving, are required. But not all excipi­ents hold up well during this process, which makes the selection of ingredients even more critical.

By using METHOCEL™ (Hypromellose) polymeric excipients in oral solid dosage matrix tablet formulations, quality, value, and robust physical properties attributes can be achieved. These poly­mers, which have been used in the industry for 70 years, are used in a wide range of applications, such as immediate-release, con­trolled-release, coating wet granulation, and direct compression. Advanced polymeric excipients are available in various grades based on viscosity and can be a substitute for different ingredi­ents. The water-soluble polymer offers exceptional flexibility and a broad range of properties typically not found in other water-soluble polymers, making it an ideal candidate for continuous manufacturing.

Continuous manufacturing is on the rise and helps manu­facturers lower production costs and time, while increasing mar­gins. The process has become a massive resource-saving technique in pharmaceutical manufacturing. Maintaining quality and consistency in continuous manufacturing batches improves drug efficacy. In matrix-controlled-release applications, direct compression can be an effective, affordable option. METHO­CEL™ DC2 can be used to modify particle morphology, resulting in improved power flow without the use of additives. These ad­vanced polymeric excipients can be used to modify particle mor­phology to improve power flow without any additives, resulting in excellent processability when it comes to improved content uni­formity and tablet weight, at elevated tablet press speed. Tablet tensile strength is another essential consideration with respect to ingredient compatibility. Products must possess the appropriate strength to avoid crumbling or chipping throughout all stages of delivery.

The pharmaceutical industry continues to focus on the innovation of models or processes that can help predict polymer and API behavior under various processing conditions. By facilitating a compaction simulator, formu­lators can use the research results to better understand how these processes work using various formulations and com­paction weight and learn what to expect when a powder is being pressed into tablets. Being able to adjust nimbly and accurately using a variety of processing methods helps formulators stay ahead of shifting manufacturing trends.

Hypromellose is a widely accepted polymer for controlled-release applica­tions; it provides the flexibility needed for formulation scientists to modulate drug re­lease for desired therapeutic effect and du­ration. This study evaluates a compaction simulator to understand the compatibility of polymers, and the effect of tableting pressure on polymer’s physical properties.

The compaction simulator is designed specifically for a detailed study of the com­paction characteristics of powder, while simulating the tableting process using dif­ferent makes/models of tablet compres­sion machines. The simulator helps formulators understand the compaction process in-depth and helps scientists over­come challenges during scale-up stage. The powder is then compressed into tablets at multiple production speeds using the simulating feature. The simulator uses automatic Heckel analysis and automatic Energy and Power analysis to measure various parameters, such as applied pres­sure, compression pressure, yield pres­sure, and more. These features help simulate the tablet machine at manufac­turing level and compress the tablets in a predictive pattern to avoid future manufac­turing challenges.

This study focuses on the compatibility study of METHOCEL™ K100M Pr CR using an ESH Compaction stimulator from Pheonix Materials Testing Ltd., along with commonly used adjuvants or flow aids under various compaction pressure. The effects of various parameters –such as compaction forces, tableting pressure, ten­sile strength, and ejection force on com­pacts – were also investigated.

The advanced neat polymer – with adjuvants such as Calcium Stearate, Mag­nesium Stearate, or fumed Silicon dioxide – was used to conduct blend studies that contain sets of 5 sequences; each se­quence contains 5 tablets. They were sifted through 60 mesh, with material blended in a 0.5-L capacity conta blender for 5 minutes at 15-16 rpm.

For each set of the experiment, the compact weight was kept at 500 mg. For adjuvants, 0.5% w/w of the tablet weight was taken and blended with a polymer for further study. Approximately 500 mg of polymer or polymer blends was filled in a 13-mm D type flat surface single punch on the Compaction Simulator. The parame­ters of each tablet, including hardness, di­ameter, thickness, and tablet weight, were recorded. The data was then fed to com­paction simulator software, which utilizes Heckel analysis and compaction slope, compaction force, tableting pressure, and ejection force, and then recorded.

As the simulator uses Heckel analysis, the significance of Heckel constant k is re­lated to the reciprocal of the mean yield pressure, which is the minimum pressure required to cause deformation of the ma­terial under compression. A large value of the Heckel constant indicates the onset of plastic deformation at relatively low pres­sure.

The compaction simulator produces a compaction slope for each set of the ex­periment and extrapolates the slope at two compression forces, such as @85 mPa and @100 mPa. The higher the slope value, the better material compatibility is seen; the various parameters were noted, including compression force, applied pres­sure, hardness, and tensile strength.

Here, the compaction simulator pro­duces a compaction slope for each set of the experiment. As shown in Figure 1, the advanced neat polymer had the highest slope value, indicative of excellent compat­ibility.

Per the literature, the higher the com­paction slope of a Heckel analysis, the lower the pressure it requires for com­paction. The advanced neat polymer shows the highest slope, ie, more than 3.0, which is indicative of low yield pres­sure to start the deformities of polymer structure, resulting in improved material compatibility.1 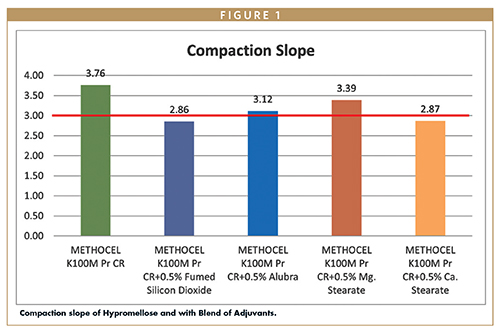 Tensile Strength
Excipients, such as diluents, fillers, and binders, play a significant role in im­proving a formulation’s content uniformity, as well as the resulting tablet’s tensile strength. High- dose tablets may lack suf­ficient tensile strength if the API is not easily compressible, while low-dose formulations may be difficult to blend uniformly. 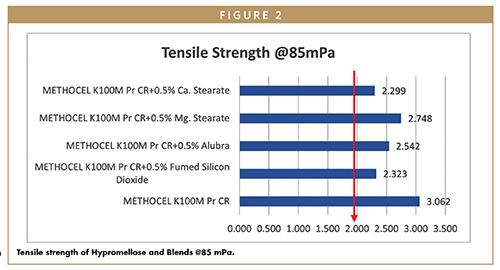 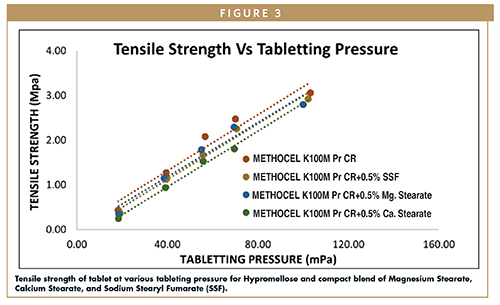 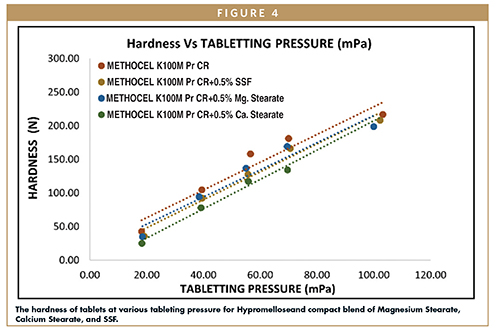 The tensile strength of advanced neat polymers was found compatible – along with flow aids such as SSF, fumed silicon dioxide, and magnesium Stearate – with­out any chipping or capping. Blends with Calcium stearate led to lower compact hardness and capping at higher tableting pressure. However, the hardness of all compacts with other combinations was strong enough to withstand further stress of coating, packaging, and shipping.

Importance of Excipients & Expertise
Formulators whose direct compres­sion tableting operations are faced with particle segregation, poor API content uni­formity, and plugging or blocking in the manufacturing process should seek out an excipient that improves powder flow and tablet compatibility, like advanced neat polymers.

To reduce manufacturing steps while producing a quality product, it is also im­portant to choose an excipient that offers functionalities that exceed or build upon traditional excipient blends. The correct ex­cipient can help manufacturers avoid in­gredient segregation during the blending process, improve flow, and achieve proper lubrication for one-step mixing. Applying an accelerated formula strategy is one of the best ways to keep savvy formulators ahead of the industry curve.

The authors wish to thank Drs. Sangmesh Torne and Tejas Gunjikar, IFF, Mumbai, India, for their help with this study. 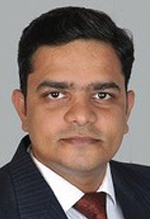 Gopeshkumar Singh is an application development and innovation scientist at IFF based out of Mumbai, India. He earned his Master’s degree from NMIMS University. His area of expertise is in controlled-release matrix formulations, delayed-release, hot melt extrusion and twin screw granulation technologies. 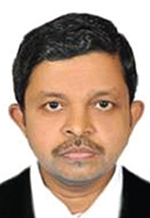 Ajit Bhagat is a senior technologist at IFF, based at Hyderabad, India. He earned his Bachelor’s degree from Mumbai University and is well-trained in equipment operations and experimental design for formulation development.