Continued growth in interest in biodegradable polymers, stretching across the biomedical community for more than 50 years, has resulted in significant biotechnology advances in drug delivery, biomaterials, tissue engineering, and medical device de­velopment. Born out of interdisciplinary collaborations of individ­uals across the globe from fields as diverse as chemistry, engineering, biology, and physics, these researchers’ shared in­terests in drug development have resulted in discoveries of more potent therapeutics in the form of peptides, proteins, nucleic acids, and other bioactive molecules. These therapies, more frag­ile than older approaches, require careful formulation of the drug delivery vehicle if they are to remain therapeutically intact with good economics until they perform their therapeutic purpose.

Popular drug delivery vehicles include lactide and glycolide homo- and copolymers because they can be fabricated into a va­riety of morphologies, including nano- and microspheres, thereby enabling highly tailored and versatile controlled and long-acting release to better control therapeutic outcomes. While not the pre­ferred route of drug delivery, their main advantages are that they can deliver therapies directly to a target site and/or ensure better patient compliance over a prolonged time period.

Administration of drugs in the form of microspheres gener­ally enhances the outcome through isolation of the given API at, or close to, the site of action and by extending drug release. Moreover, more delicate drugs, including peptides and proteins, can be protected against chemical and enzymatic degradation when entrapped in microspheres. Poly(lactic acid) (PLA), poly(lac­tic-co-glycolic acid) (PLGA), and poly-ε caprolactone(PCL) are among the well-documented FDA-ap­proved polymers used for the preparation of safe and effective vaccine, drug, and gene therapy delivery systems using well-described reproducible methods of fabri­cation.1 Over recent years, InnoCore Pharmaceuticals of The Netherlands has developed copolymers, such as the Syn­Biosys range of multi-block polymeric ma­terials, in an attempt to enhance control over physico-chemical and degradation characteristics.

It is noteworthy that biocompatibility is not only dependent on the polymer’s in­trinsic property, but also the particulate type and the biological environment. Hence, intensity and length of specific polymer-tissue interactions can be varied greatly in different organs, tissues, and species. The release of different drugs from PLA or PLGA matrices is the sum of surface and bulk diffusion as well as ma­trix erosion mechanisms, usually with a high initial burst rate.2

The advantages of long-acting formu­lations include enhanced patient compli­ance and convenience, and a lower dose of drug compared with a daily oral regi­men. Despite these advantages, it is inter­esting to note that the limited number of different drug products placed on the mar­ket in the past 30+ years suggests that de­velopment of injectable, long-acting depot formulations is both demanding and chal­lenging. What makes the development of long-acting PLGA for mulations so chal­lenging is down to several factors.

Formulating a sustained-release dosage form demands a clear under­standing of the physicochemical and bio­logical properties of the given polymer and the polymer’s interaction with the API, with both married to an appropriate mi­crosphere manufacturing technique. The design of a suitable morphology of porous microspheres of biopolymer to achieve the desired functionalities requires control over their physical properties, such as pore size, porosity, and microsphere size.

If required, templating methods can be used to create accurately sized porus structures. A variety of porogens, such as bovine serum albumin (BSA) and alginate microspheres, have been cited as suitable.3 One important determinant of the porosity of the microstructure is the molar ratio between lactide and glycolide in PLGA. Also, higher molecular weight PLGAs are preferred for creating a more porous structure while low molecular weight PLGAs reduce microsphere size. As well as controlling for porosity and pore size, variations of these elements is one factor in determining the encapsulation ef­ficiency of the chosen drug within the PLGA matrix, although higher encapsula­tion efficiency values are achieved by pro­duction using a double emulsion technique

A well-recognized issue with PLGA mi­crospheres is their tendency to have a high initial burst release of drug. Typically 60% of drug loading is released in the first 24 hours. Generally undesirable, this effect has been known to produce toxic levels of API in plasma, with detrimental effects. This burst release is largely due to surface porosity and can be modified, for exam­ple, by the addition of buffer to achieve a plasticising “skin” on the PLGA or through storage at high humidity to “seal” the sur­face.4 Another researcher has demon­strated the use of alginate coating to achieve the same effect.5 The concentra­tion of BSA has a significant influence on the pore size. During the formation of double emulsions, the osmotic pressure drives water penetration from the external water phase into internal water phase, leading to the formation of interconnected pores and finally, porous PLGA spheres after solvent evaporation. It is, therefore, reasonable to expect smaller pores to have a lower osmotic pressure, corresponding to a lower BSA concentration in the inter­nal water phase.6

As described earlier, the final determi­nant of desired functionality is control over microsphere size during a robustly scala­ble manufacturing method. A good man­ufacturing technology will also allow the attributes of the chosen polymer system to deliver optimal encapsulation efficiency values while controlling burst release.

Sterilization carried out on the fin­ished microspheres can lead to changes in the expected performance. For this reason, an aseptic process for microsphere pro­duction is desirable.

The customary production method, the solvent evaporation process, necessi­tates emulsification. There are two specific forms of emulsion processes: single emul­sion and double emulsion. With the single emulsion process, an appropriate amount of PLGA is dissolved in an organic solvent, eg, dichloromethane, containing the API. The solution containing API and polymer is then subsequently emulsified by addition to aqueous solution containing surfactant or emulsifying agent to form an oil-in-water emulsion.

After formation of the stable emul­sion, the organic solvent evaporates, which can be accelerated by continuous stirring, dilution, adjustment of tempera­ture or reduction of pressure. As it evapo­rates, the dissolved polymer precipitates to transform the droplets of polymer into solid microspheres. The microspheres thus developed are then sieved, washed, and lyophilized under sterile conditions, result­ing in a final microsphere drug product suitable for fill-finish processing.

In the double emulsification process, water-soluble drugs are initially encapsu­lated by creating a primary emulsion of aqueous API solution in solvent+polymer solution. The resulting water-in-oil emul­sion is then emulsified into aqueous buffer/surfactant solution to produce the secondary emulsion. The particle size and encapsulation efficiency of the system is controlled by solvent and stirring rate, among other factors.

Solvent extraction kinetics are vital for creating a secure shell that depends on the solvent type used, temperature, and the type of PLGA. PLGA-solvent interaction also affects the PLGA coalescence and shell formation, determining the quality of microparticles formed. Crucially, the choice of solvent determines the drug sol­ubility in the PLGA-drug mixture, particu­larly for hydrophobic drugs, and therefore affects drug loading, encapsulation effi­ciency (EE), and drug-release kinetics. As a result of each drug’s unique physico­chemical properties, each drug formula­tion needs a holistic consideration of PLGA specification, solvent type, and micropar­ticle manufacturing conditions.

During the production of PLGA mi­crospheres, slight changes in the formula­tion parameters can have radical effects on microsphere morphology and, in turn, drug release. With respect to double emul­sion-solvent extraction, the mechanisms controlling microsphere internal porosity have been established for some time. In this instance, internal porosity is depend­ent on the stability of the primary emul­sion.

Traditionally, manufacturing methods have relied on high shear homogeniza­tion. This gives rise to a number of ineffi­ciencies. The significant disruption of the secondary emulsion during emulsion manufacture results in low EE values. Ad­ditionally, this technique gives a wide size distribution of microspheres, which must be sieved, with significant waste arising, to give the correct size for administration. If this technique is applied to a sensitive API, the high shear will degrade a significant fraction rendering it therapeutically useless while adding to the regulatory compliance burden.

More recently, manufacture of highly precisely sized microspheres has been de­veloped using microfluidics technologies. Much has been written about these tech­niques, but they are all challenged when it comes to scale-up. The scale-up method of choice is to number up with conse­quently increased stringency of pumping and control systems and with no economies of scale benefits.

A third, well-established method that has the benefits of both homogenization and microfluidics but with few of their drawbacks offers precision at scale. Mem­brane emulsification was identified in Japan in 1985 but has come of age in the hands of Micropore Technologies Ltd. 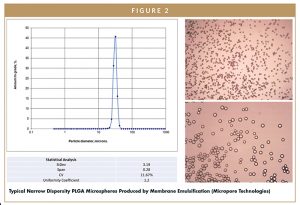 Client data highlights that it is com­mon for 30% or more of microspheres produced using the traditional homoge­nization method to be over- or under-size and require removal through laborious and time-consuming sieving. The com­pany has examples in which the material discard rate has been as high as 80% to 90%. Micropore’s technology reduces this discard to zero, with consequent improve­ments in processing time and economics.

While biopolymers, such as PLGA, are most commonly associated with mi­cron-size microspheres, PLGA nanospheres are emerging as interesting drug delivery vehicles. Such is the adaptability of Micropore’s technology that it can be turned to the manufacture of this size of material. 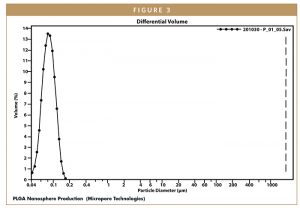 The shear forces used in membrane emulsification are less than 50% of those required to lyse viable cells. This gentle process results in almost no degradation of sensitive APIs, retaining well above 90% biological activity compared with 37% to 67% degradation when rotor-stator ho­mogenization is the method chosen for mi­crosphere encapsulation.7 Because Micropore’s process is an inherently gentle process, the result is extremely high-quality microspheres when using a double emul­sion process, as the primary emulsion is not broken during secondary emulsifica­tion. A gentle process enables enhanced microspheres, with high encapsulation ef­ficiency of up to 99%, to be developed using a double emulsion-based mem­brane emulsification method.8 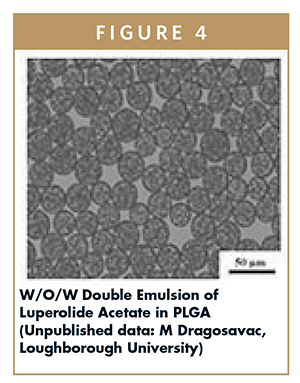 The simplicity and flexibility of Micro­pore’s technology is such that develop­ments can be transferred seamlessly from preclinical formulation development on the laboratory bench, through pilot scale and into full-scale GMP manufacturing, opening opportunities for more rapid de­velopment to explore the best way to opti­mize bioavailability for formulations.

Of course, reproducibility is vital in a full-scale manufacturing environment. In this respect the precision-engineered solu­tion offered by Micropore excels. 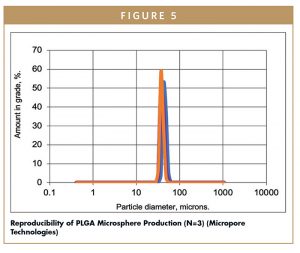 In summary, and to quote G2GBIO Inc., South Korea, who have licensed Mi­cropore’s technology, “The traditional method of manufacturing microspheres faced the challenge of difficulty in achiev­ing uniformity and mass production. There also were limitations, such as lowering the predictability of drug efficacy as a result of low manufacturing reproducibility. The ex­isting microsphere manufacturing method additionally had a problem of difficulty in cleaning and sterilizing, which are essen­tials for sterile GMP production. Microp­ore’s microsphere manufacturing technology using membrane equipment overcomes the aforementioned problems. By introducing the newly developed mem­brane equipment in the GMP manufactur­ing process, 1 kg of uniform particles can be produced within an hour. This is a mass production scale of about 1,000 vials for Alzheimer’s disease treatment and about 30,000 vials for animal neutering drugs.”9

Together, recent advances in biopoly­mers and manufacturing technology now enable formulation of injectable drug products to be tailored at will to achieve a target bioavailability in a shorter develop­ment time with robust and low cost of manufacture, thereby delivering signifi­cantly improved therapeutic outcomes against the target disease. 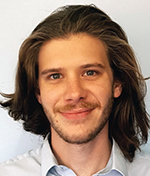 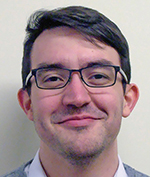 Sam Trotter has a Masters degree in Chemical Engineering and heads up operations for Micropore, overseeing day-to-day lab operations, working with customers, and developing equipment design. 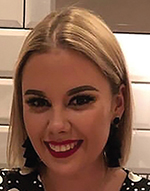 Poppy Maley has a Masters in Clinical Psychology and heads lead generation and customer relations management for Micropore Technologies.