At the recent American College of Neuropsychopharmacology (ACNP) meeting, Sunovion Pharmaceuticals and PsychoGenics Inc. announced positive Phase 2 results for SEP-363856, a novel, first-in-class treatment that has the potential to offer patients with schizophrenia the chance to live a near-normal life. Available treatment options fail to treat all schizophrenia symptoms, and their side effects result in non-compliance and relapse. SEP-363856, by contrast, shows robust effects across a broad range of disabling symptoms, including positive, negative, depressive, and general psychopathology symptoms, with a safety profile similar to placebo. Discovered via SmartCube®, PsychoGenics’ target-agnostic platform, SEP-363856 does not interact with the dopamine D2 or other neuroreceptors thought to mediate the effects of currently available antipsychotic agents. The SmartCube platform thus represents a novel approach to discovering the next generation of breakthrough treatments for schizophrenia and other neuropsychiatric disorders.

Neuropsychiatric disorders impact hundreds of millions of patients, many of whom have poor or no treatment options. Yet, despite the enormous human cost and societal burden, there are almost no new mechanisms to treat major neuropsychiatric disorders in decades. Instead, we rely on old drugs, some with serious side effects. The main reason for this situation is that the target-based approach of identifying highly selective targeted compounds has failed to deliver new and improved treatments for central nervous system (CNS) disorders.1 Consequently, the approval rates for new CNS drugs are significantly below the average success rates of other therapeutic areas.2-5 Faced with generic competition and rising costs of drug discovery and development, many big pharma companies have abandoned psychiatric drug discovery.3,4

The target-driven approach relies on understanding the human genetics of a disease. However, neuropsychiatric disorders are infinitely complex, involving multiple symptom domains that are not associated with a specific gene mutation. Instead, there are multiple susceptibility genes, epigenetic factors, compensatory mechanisms, and significant environmental factors (stressors) that contribute to these disorders, resulting in dysfunctional neurocircuitry and atypical behavioral/functional output.6 Neuropsychiatric symptom domains, which are broadly classified into emotion, cognition, motivation, and social behavior categories, permeate multiple psychiatric disorders, and the presentation and severity of symptoms may vary considerably even for the same disorder. Recognizing this complexity, the National Institutes of Health (NIH) has established a research framework known as the Research Domain Criteria (RDoC, https://www.nimh.nih.gov/research-priorities/rdoc/index.shtml), to enhance understanding of neuropsychiatric disorders in terms of psychological/biological systems associated with symptom domains, and to relate those symptom domains to neurocircuitry and genetics.

The alternative to target-driven drug discovery is a phenotypic systems approach, which can deliver treatments that work via novel, unknown, or multiple mechanisms. Phenotypic screening strategies have been more productive than target-based approaches, especially for CNS disorders, as illustrated by Swinney and Anthony’s seminal 10-year survey (1999-2008), which found that 87.5% of new, first-in-class CNS treatments were discovered phenotypically.1 There is an industrywide push to bring in vivo data into the drug-discovery process earlier so researchers can make more informed decisions early on, thereby positively impacting success rates and reducing discovery time.7-10

The SmartCube platform offers an unbiased way to industrialize phenotypic drug discovery for CNS disorders by screening compound libraries in a manner that is agnostic to mechanism, thus often resulting in novel pharmacology.11-16 SmartCube is an automated testing platform that presents a sequence of challenges to a mouse through its customized hardware, incorporating computer vision and artificial intelligence to extract behavioral, physiological, and telemetric features. The system offers several advantages over standard behavioral testing, including:

-High throughput — can screen tens of thousands of compounds for CNS activity and identify those with behavioral/physiological profiles that are redolent of drugs that treat a specific neuropsychiatric disorder;
-High content — collects millions of measures and thousands of features, and employs proprietary machine learning algorithms to detect subtle phenotypic differences (often not seen with standard tests) associated with a disease model or drug effect; and
-Unbiased — computer vision algorithms and artificial intelligence eliminate human intervention and subjectivity.

Although SmartCube collects approximately half a million data points per mouse per session, it uses behavioral definitions and machine learning techniques to reduce a dataset to approximately 2,000 features (Figure 1). The system enables testing of novel compounds and disease models by comparing these compounds’ complex behavioral/physiological profiles to those from a large database of marketed drugs used to treat the spectrum of disabling neuropsychiatric diseases. The SmartCube platform applications include:

-Screening representative compounds from chemically diverse libraries in a target-agnostic approach to find compounds that interact with novel or multiple targets;
-Screening target-focused libraries to determine the therapeutic utility of a target or to identify a preferred chemotype;
-Repurposing compounds that are discontinued (for reasons other than safety) or currently being developed for other non-CNS indications;
-Assessing compound combinations to determine the efficacy of a combination of novel compounds or a novel compound combined with an existing marketed drug;
-Lead optimization to identify more potent and/or safer compounds; and
-Detecting side effects through assessment of broad dose responses. 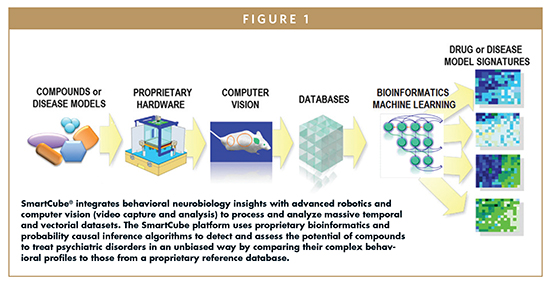 The SmartCube hit rate (hits are defined as having at least 70% activity in SmartCube at a single dose) is approximately 20% for a diverse library. The hit rate is high relative to typical high-throughput screening at single targets (typically 0.1%). Compound hits then undergo a series of steps to:

-select compounds with the desired signature/devoid of side effects;
-assess potential patentability around the chemotype;
-eliminate undesirable targets such as hERG and/or to show the absence of classical targets;
-determine whether the compound differentiates from existing treatments (eg, antipsychotics that improve negative symptoms or cognition); and
-establish a translational biomarker, a tool that can be employed to demonstrate that the compound is getting to the brain and having an effect (eg, EEG or MRI).

Compounds that pass those hurdles proceed to lead optimization. At this stage, analogs of the lead compound are made and tested in SmartCube to identify compounds with improved potency or to eliminate a possible side effect. Using an in vivo readout allows rapid assessment of modifications to a pharmacophore, and preserving the behavioral signatures means the compound is hitting targets in the brain. Compound screening and optimization in SmartCube are highly efficient; the system typically enables identification of a pre-development candidate from fewer than 300 compounds, a process that can be completed in under a year, a success rate that not only saves considerable time and money, but also patient lives.

In addition to the SmartCube signatures for the thousands of compounds tested, PsychoGenics has tested several disease models (including models of Alzheimer’s disease, Parkinson’s disease, amyotrophic lateral sclerosis (ALS), and depression) in SmartCube to identify the critical features that are responsible for the phenotype. This approach is invaluable in finding robust and early phenotypes for many CNS disorders. Knowing the features that define a disease model means we can mine the thousands of tested compounds and identify treatments predicted to reverse the disease-specific features and later test and confirm those predicted treatments in the model. 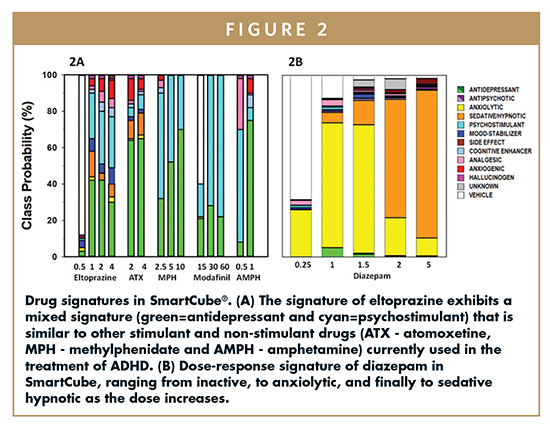 PsychoGenics has entered into shared-risk partnerships with several pharma and biotech companies to help identify a new generation of treatments for neuropsychiatric disorders. Due to its target-agnostic nature, the SmartCube approach has increased the probability of successfully finding drug candidates with novel, first-in-class mechanisms of action and improved side-effect profiles, making them suitable for treating the symptoms of neuropsychiatric disorders. In the Sunovion partnership, PsychoGenics evaluated a library of thousands of compounds, leading to the joint discovery of several new drug candidates with novel modes of action, including SEP-363856.

The development of SEP-363856 has potentially profound implications for the 0.3% to 0.7% of people living with schizophrenia.17 In addition to experiencing the so-called positive symptoms of hallucinations and delusions, patients with schizophrenia often lose motivation and interest in social activities, become socially isolated, and find it difficult to experience pleasure in everyday life; these latter effects are commonly referred to as the negative symptoms of the disease. Notably, unlike currently available schizophrenia treatments, which are effective in treating some of the positive symptoms but not the negative symptoms, SEP-363856 appears to improve both types of symptoms. In a double-blind, placebo-controlled Phase 2 trial involving 245 patients with schizophrenia, SEP-363856 was associated with a statistically significant and clinically meaningful improvement in the Positive and Negative Syndrome Scale (PANSS) total score compared to placebo after four weeks of treatment (-17.2 vs. -9.7, respectively; p=0.001). Patients treated with SEP-363856 also showed improvement in the overall severity of illness as assessed by the Clinical Global Impression — Severity scale (CGI-S) (p<0.001). In addition, SEP-363856 was associated with improvement in all major PANSS (positive, negative and general psychopathology) (p<0.02) subscales. Additionally, SEP-363856 was well tolerated in the trial, with an overall discontinuation rate that was comparable to placebo. Adverse events including extrapyramidal symptoms (slowed movements, stiffness or tremor) were also comparable to placebo. By contrast, current schizophrenia treatments have severe side effects, including sedation, akathisia/movement disorders, and weight gain, which cause many patients to discontinue treatment and increase the probability of a relapse.

The recent Phase 2 clinical trial was designed, conducted and supported by Sunovion Pharmaceuticals, as part of the SEP-363856 global development program. Patients who completed the Phase 2 trial were eligible to continue in an open-label, long-term extension study, which is currently ongoing. SEP-363856 is also currently being studied as a treatment for Parkinson’s disease psychosis. Additional studies are planned and additional indications are under consideration in the hope that SEP-363856 will soon be available to patients suffering from severe disabling mental illnesses. 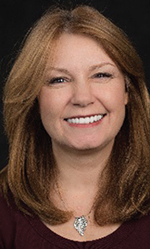 Dr. Emer Leahy is CEO of PsychoGenics Inc., a profitable preclinical CNS service company. She earned her PhD in Neuropharmacology from University College Dublin, Ireland, and her MBA from Columbia University. She also serves as Adjunct Associate Professor of Neuroscience at Mount Sinai School of Medicine. Dr. Leahy has more than 25 years of experience in drug discovery, clinical, and business development for pharmaceutical and biotechnology companies, including extensive knowledge of technology assessment, licensing, mergers and acquisitions, and strategic planning. Dr. Leahy served on the Emerging Companies Section for the Board of Directors of the Biotechnology Industry Organization (BIO). She currently serves on the Board of Directors of Intensity Therapeutics, the Business Review Board for the Alzheimer’s Drug Discovery Foundation, and the Scientific Advisory Board of the International Rett Syndrome Foundation. She can be reached at emer.leahy@psychogenics.com.