A confluence of factors from host genetics, immune dysreg­ulation, environmental triggers, and gut dysbiosis all contribute to a disease developing in an individual. Given certain genetics and environmental factors, some people are susceptible to or­ganisms (or “pathobionts”) in the gut that can cause disease, while others are not. Pathobionts are defined as bacteria present in the “normal” human intestine that have the potential to cause or drive disease development, and therefore share features with both commensal symbionts and pathogens.1 For example, Seg­mented Filamentous Bacteria (SFB) are common members of the mouse microbiota that exacerbate the development of autoim­munity, and Helicobacter species drive the development of colitis in genetically susceptible mice.2 SFB and Helicobacter species therefore represent classical pathobionts. In patients susceptible to disease, exposure to pathobionts induces intestinal dysbiosis and triggers an inflammatory cascade that leads to the develop­ment and progression of diverse chronic diseases and certain cancers.

Inflammatory bowel disease (IBD) is one example of a dis­ease driven by such factors for which currently available treat­ments are not a viable solution for all patients. While there have been tremendous advances in IBD therapies, approximately 30% of patients are unresponsive to initial biologics therapy and, even among responsive patients, up to 10% stop responding to treatment annually.

With an initial focus on IBD, that is, Ulcerative Colitis and Crohn’s Disease, Artizan Biosciences has an exclusive license to the patented technology, IgA-SEQ™, invented by its founders to identify putative disease-driving bacteria through the examination of fecal samples from patients with IBD. By leveraging this techonology, Artizan uses the human gut as a drug discovery tool. This process has led to a new class of transformative precision therapeutics that disrupt inflammatory disease triggers – gut exclusive microbial metalloprotease inhibitors (GEMMI).

The composition of the intestinal microbiota varies substan­tially between individuals and has significant effects on host physiology and disease susceptibility.3-7 A major mechanism by which the microbiota impacts the host is through its interactions with the intestinal immune system. These organisms modulate the intes­tinal immune system and affect disease risk through chronic stim­ulation of specific immune responses, of which can be both beneficial and detrimental to the host. In mice, for example, Clostridia species induce the expansion of regulatory T cells and suppress allergic responses and intestinal inflammation, Seg­mented Filamentous Bacteria (SFB) induce T helper 17 responses, exacerbate the development of arthritis, and protect against the development of diabetes.8-11 Alterations in the composition of the microbiota, sometimes referred to as “dysbiosis,” are known to drive development of both inflammatory and non-inflammatory diseases, including IBD, metabolic diseases, and autoimmunity.12 IBD is a chronic, relapsing chronic inflammatory disease for which there is no cure. In IBD, it is believed a dysbiotic intestinal microbiota plays a key role in driving in­flammatory responses during disease de­velopment and progression.13-15 In 2020 alone, more than 3 million people in the US and European Union were diagnosed with IBD. Although the exact causes of IBD are unknown, pathobionts are believed to play a pivotal role in disease development.

THE ROLE OF IMMUNOGLOBULIN A

Immunoglobulin A (IgA) is the pre­dominant antibody isotype secreted into the intestinal lumen, where it binds indige­nous members of the microbiota and con­trols microbiota composition.16-19 IgA is also a critical mediator of intestinal immu­nity.20,21 Recognition of enteric pathogens by the intestinal immune system results in the production of high-affinity, T cell-de­pendent, pathogen-specific IgA, which is transcytosed into the intestinal lumen. In the lumen, these antibodies can bind and “coat” offending pathogens and provide protection against infection through neu­tralization and exclusion. Indigenous members of the intestinal microbiota also can stimulate IgA production and can be­come coated with IgA.22-24 While all intes­tinal bacteria can induce specific IgA responses, in principle, direct analyses of the proportion of intestinal bacteria that are coated with IgA demonstrated that only a fraction of all intestinal bacteria are measurably IgA coated.25-28 Because little is known about the specificity of the intes­tinal IgA response in the context of a com­plex microbiota, whether this fraction is composed of many species or a high per­centage of a few species remains unclear. However, while several commensal bacte­ria have been shown to induce specific IgA responses, pathobionts and pathogens in­duce higher levels of IgA than “true” com­mensals.28 For example, SFB and Helicobacter species are potent inducers of IgA response in the intestine.29,30 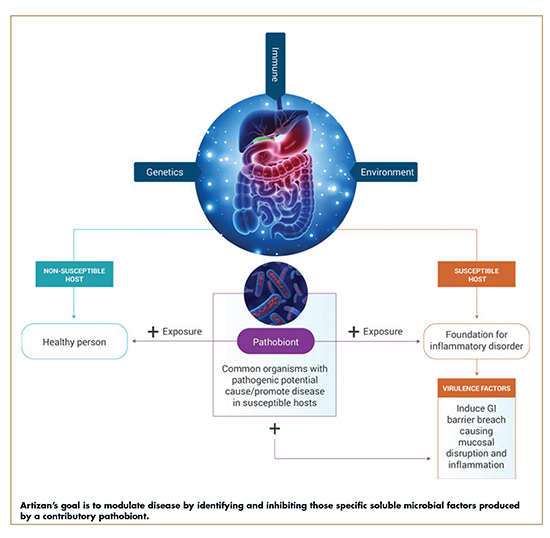 The inflammasome is a critical com­ponent of the innate immune system that orchestrates the activation of Caspase-1 and release of the inflammatory cytokines IL-1β and IL-18 in response to infection or damage. Mice lacking components of the inflammasome, such as the signaling adaptor apoptosis-associated speck-like protein containing a CARD (ASC), harbor a dysbiotic microbiota that is colitogenic and can be transmitted to wild type mice through co-housing.31 In particular, acqui­sition of bacteria from the family Prevotel­laceae has been implicated in colitis development in dysbiotic mice.32 Despite considerable effort, the identification of specific pathobionts responsible for driving the development of disease in humans has proven difficult due to the complexity and diversity of the microbiota, as well as the influence of host genetics and environment on disease susceptibility.

SUMMARY OF THE IGA-SEQ PATENTED INVENTION

IgA-SEQ capitalizes on the discovery that secretory antibodies can be used to detect and identify organisms present in the microbiota that influence susceptibility to or contribute to the development or pro­gression of diseases or disorders, includ­ing chronic inflammatory diseases. However, compared to pathogen-induced IgA, commensal-induced IgA is generally believed to be of relatively low-affinity and specificity.33,34 Thus, relative levels of bac­terial coating with IgA might be predicted to correlate with the magnitude of the in­flammatory response triggered by a spe­cific intestinal bacterial species. IgA-SEQ is a method for identifying the target or­ganisms in the microbiota contributing to an inflammatory process and, by default, is on or near any mucosal surface of the patient including: the gastrointestinal, the respiratory, and genitourinary tracts. In ad­dition to IBD, the role of pathobionts and chronic inflammation have been impli­cated in multiple conditions, including celiac disease, acute diverticulitis, intestinal hyperplasia, metabolic syndrome, obesity, rheumatoid arthritis, liver disease, hepatic steatosis, fatty liver disease, non-alcoholic fatty liver disease, and non-alcoholic steatohepatitis.

Metagenomic studies comparing the microbiota of diseased and normal indi­viduals have failed to identify disease-causing bacteria for a number of reasons, notwithstanding limited technical method­ologies. There is a need in the field to not only identify bacteria in the microbiota that are implicated in the development or pro­gression of certain diseases and disorders, but to determine which are activating the chronic inflammatory pathways and ex­actly how. When identifying promising microbiome therapeutic approaches for any disease or condition, it is critical to under­stand the mechanism of disease and disease pathways as well as the role of the microbiome. IgA−SEQ begins that discov­ery process whereby the human gut now becomes a crucial drug discovery tool. IgA−SEQ was developed at Yale, licensed by Artizan, and utilizes flow cytometry-based bacterial cell sorting and 16S se­quencing to characterize taxa-specific coating of the intestinal microbiota with immunoglobulin A. It has been demonstrated that the high IgA−coating uniquely identifies colitogenic intestinal bacteria in a mouse model of microbiota-driven coli­tis. Proof of principle was shown by leveraging the IgA−SEQ methodology to identify culprit pathobionts and proceed with extensive anaerobic culturing of these organisms from patients with IBD to create personalized disease-associated gut mi­crobiota culture collections with pre-de­fined levels of IgA coating. Using these collections, it was found that intestinal bac­teria selected on the basis of high coating with IgA conferred significant susceptibility to colitis in germ-free mice. Thus, these studies suggested that IgA−coating iden­tifies inflammatory commensals that pref­erentially drive intestinal disease.35 Inflammation within the intestine and distal organs can be mediated by innate and adaptive components of the immune response. IgA-SEQ is based on the rationale that certain intestinal bacteria that become coated with IgA are close to the host mu­cosal surfaces and are activating and promulgating a pro-inflammatory re­sponse. Thus, IgA-SEQ is a promising ap­proach for identifying colitogenic bacteria in man. The influence of these gut micro­biota/host immune interactions, however, is not limited to the gut. More recently, enrichment of IgA-coated microbiota has been demonstrated for Crohn’s disease associated spondylarthritis.36 Thus, IgA-SEQ might be applicable to the identifica­tion of microbial strains in the gut microbiota, which, through an inflamma­tory circuitry, are modulating inflammation and driving disease at distant sites. 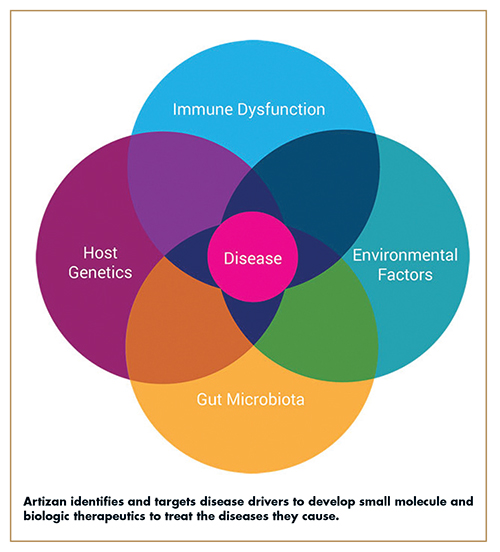 The mammalian immune system has evolved in the presence of a complex com­munity of indigenous microorganisms that constitutively colonize all barrier surfaces. This intimate relationship has resulted in the development of a vast array of reciprocal interactions between the microbiota and the host immune system, particularly in the intestine, where the density and di­versity of indigenous microbes are great­est. The relationship between the immune system and the microbiota is central to the impact of the microbiota on disease, thus, immunologically important pathobionts are likely to have outsized effects on human disease. By utilizing the novel IgA-SEQ approach, Artizan’s team of re­searchers can take advantage of mucosal antibody responses to the microbiota to identify immunologically relevant microbes that may play causal roles in chronic dis­ease.

To date, this process has allowed Ar­tizan to develop transformative precision therapeutics that target and block the root causes of diverse, serious diseases trig­gered by intestinal inflammation including gut exclusive microbial metalloprotease in­hibitors (GEMMI). These precision thera­peutics include ARZC-001, a novel, oral, gut-restricted potent small molecule in­hibitor for the treatment of IBD. The com­pany anticipates ARZC-001 will enter the clinic by early 2023. Additionally, Artizan is advancing other candidates into the late preclinical stage for IBD, each distinctly dif­ferent in chemical composition and the target that it is aiming to inhibit.

Beyond IBD, Artizan is also using IgA-SEQ to identify and characterize microbial drivers of disease within precise patient subsets in other areas, including certain cancers and gastrointestinal, metabolic, autoimmune, and neurodegenerative dis­ease. The company has a Parkinson’s Dis­ease therapeutic discovery and development program that is progressing. Artizan also continues to identify partners for therapeutic development in other disease states as well as concepts that im­prove the tolerability and viability of currently available treatments in areas including oncology. 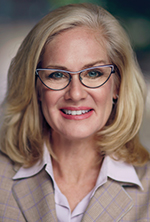 Dr. Bridget Ann Martell is President and Chief Executive Officer of Artizan Biosciences. She is a seasoned biopharmaceutical executive with high-impact, results-oriented breadth and depth in clinical development, medical affairs, and business development across a range of therapeutic areas from first-in-human through approval and commercialization. She has held leadership and C-suite executive roles at companies, including Kura Oncology, where she led the Menin Inhibitor Program, and at Juniper Pharmaceuticals, where she led the development program for a Bob Langer-created drug/device technology that was out-licensed. She started her pharmaceutical career at Pfizer, where she had roles of increasing responsibility that included Clinical Team Leader for Sutent® GU solid tumors in the Oncology Business Unit and, ultimately, Biosimilars Medical Head. She began her clinical investigation career at Yale with a Career Development Award, where she led a therapeutic cocaine vaccine trial and was a Robert Wood Johnson Clinical Scholar. She was a practicing physician at Yale for 20 years and remains active as an Entrepreneur in Residence at the Yale Innovations Office. She earned her BSc in Microbiology from Cornell University, her MA in Molecular Immunology from Boston University, and her MD from The Chicago Medical School. Dr. Martell is board certified in Internal and Addiction Medicine.