Not all medicines are suitable for delivery via a tablet or capsule, or even by injection or infusion. Some are best delivered via inhalation, often because they are treating a condition that affects the lungs, but with this route of delivery comes the requirement for a suitable device. Traditional inhalers and nebulizers can be difficult to operate, and require the patient to time their inspiration breaths with the drug’s release. Additionally, devices may not be appropriate for all patients, such as pediatrics, or may also be difficult to operate for those with dexterity issues, such as osteoarthritis.

There is, therefore, plenty of opportunity for the development of new, improved devices to ensure inhaled drugs can be accessible for a wide range of patients and can treat various diseases and conditions effectively. The starting point when designing a new device should always be to define its target market, user needs, and possible regulatory pathway. Innovators need to work with engineers and designers to focus on who the device is for, and what the requirements of both the drug and the patient population are to ensure success.

With this list of top-level criteria in hand, the design process can begin. Usually, as an initial step, there would be a number of different concepts that are proposed, which are then ranked in terms of both benefits and disadvantages. Those that are the closest match to the requirements would be advanced through to the more detailed design stage, where practical considerations such as the devices’ manufacturability and scalability would be assessed.

The next step is to take these detailed design concepts, and make sample devices using 3D printing or another rapid prototyping method. However good and detailed a drawing might be, it is not a substitute for a physical prototype, which allows a thorough assessment and gives a real sense of how it might work in the hands of a patient. Having a plastic device also allows tests to be carried out at an early stage as a dry run to reduce time later.

These prototype devices will also allow laboratory tests to determine how the formulated drug is likely to behave in the device and early mechanical tests to be carried out against those key functional parameters that were defined at the outset. These assessments will allow a list of critical quality attributes (CQAs) for the device to be defined

If, after these initial studies, the proposed device looks to be promising, then a more robust prototype will be made. The use of computer-aided design and rapid mould tools allow this to typically be completed within 6 weeks.

Rapid development tooling is an early investment that can pay substantial dividends later on. Prototypes made via 3D printing are adequate for early studies and assessment, but once multiple examples are required for testing in the laboratory, this becomes unfeasible. There are essential developmental tests that can only be done on rigid plastic prototypes, including drop tests and mechanical abuse level loading type tests, as well as environmental tests (the conditions of which are noted in ISO20072) that cannot be carried out effectively without a plastic device. 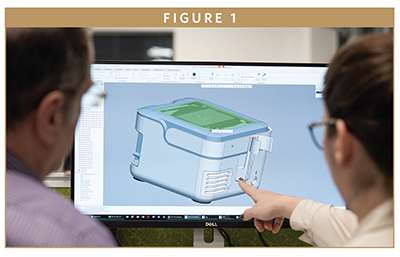 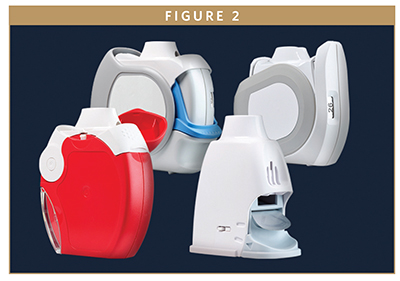 Human factors studies are particularly important in the design, as they look at how the device behaves in the hands of the likely user population. Initially, the studies will be conducted with relatively small numbers of subjects, and with the user groups that are most likely to show user errors. These may include the elderly, where common chronic conditions may mean there may be dexterity issues, or young children, who may not have the strength or coordination to operate the device effectively.

It is often easier to recruit healthy volunteers as subjects (or volunteers who are healthy aside from those dexterity issues). Such studies are an excellent tool for sifting out potential problems early on in the development process: in the long run, it will always be faster and cheaper to iron these issues out at an early stage than to progress a project into late-stage clinical trials only to have it fail because the device was not suitable. Rather, the best strategy is likely to be to create multiple iterations of prototypes, repeating the human factors studies each time, until a device that meets all the requirements has been identified. The amount of studies needed depends on the complexity of the user interface; typically five or six formative studies spaced across the device development cycle are required for a new device design, and a final validation study is conducted to demonstrate acceptable performance against the user needs, with a sample of the intended user population.

In terms of device design, a careful exploration of all the possibilities will assist in choosing the right concept from the outset and, if necessary, to head down a parallel path instead to ensure they are fully explored before committing to a specific design. Evaluating the human factors is essential in risk reduction and can be done in a comparative fashion when multiple designs, or elements of designs, are still being considered, thus guiding the design at relevant points in development.

The device development process typically follows a stage-gate process in which the project is reviewed with a board of representatives from across the relevant disciplines. The development is structured so that initially, the Target Product Profile (TPP), user requirements, including the user needs and intended uses, are reviewed at the first stage-gate, followed by the concepts at the second stage-gate, formal designs, device verification, manufacturing equipment, validation, and finally preparation for market. The device performance continues to be monitored by post-market surveillance to assess whether lifecycle management activities are required. The reviews are conducted with representatives from a number of different disciplines to ensure every relevant aspect is reviewed prior to continuation through the phases.

It goes without saying that it is essential to align the device development process with the requirements of the regulators, and ensure that sufficient evidence of suitability is included in the registration package. Aligning with the waterfall diagram (Figure 3) in the FDA’s 21 CFR Part 820.30 is a good place to start. The different regulatory bodies all have slightly different requirements, and it is important to include an assessment of whether it will meet the demands of the regulators in all the regions where the device is likely to be launched. 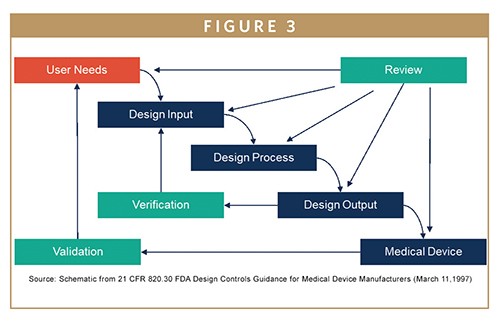 Defining the regulatory standards is another important process. Typically, in the design process, a list of 20 or 30 standards will be devised for each device development opportunity, and making sure the design aligns with this list throughout the process is crucial to succeed. Compliance with these standards should be carefully documented, otherwise there is a risk that at the end of the process, the result will be something that fails to meet them, wasting the time and cost of the project.

Correspondence with the regulators is another important consideration, as gaining regulatory input at an early stage increases the likelihood the device concept will be deemed acceptable. This type of interaction is also important when designing human factors validation studies to ensure the protocol is acceptable, and will therefore provide the required evidence that the design meets its intended uses. This correspondence can typically be conducted via a controlled correspondence route, which can also involve sending physical prototypes or require a physical meeting to demonstrate the device.

In an ideal scenario, a new product will take advantage of an existing delivery platform as this affords a degree of proof that the product will be scalable to a commercial process, and issues around scale-up are less likely. Using laboratory-scale manufacturing to explore the design space of the product ahead of large-scale production can help ensure efficient costs and timescales. It will also assist the product getting into the clinic at a relatively early stage without having to invest in the expensive equipment and facilities required for a commercial product in place in advance.

There are multiple options for the delivery device and platform, and having experience from previous device development projects affords developers or CDMO partners a wider toolkit with which to work. Technologies, such as blisters, piercing, and winding up of blister strips, can be transferred readily across to new products once the knowledge as to how to assemble them and how they behave is known. This allows elements to be used with a different user interface, or another target market, and using those same general principles, experience and validated test methods from another device, greatly reduces the risk and time of development.

Applying statistical analysis to the test data allows the prediction of any likely problems once devices are being manufactured and filled at a commercial stage. If any issues are foreseeable, then this analysis will allow measures to be put in place in advance to reduce the potential of large numbers of returns, and the associated cost, accompanying poor publicity, and a loss of reputation.

Various different methods can be applied to reduce the risk. Paper-based exercises, such as tolerance analysis, can be used to assess the risk, while processes, such as failure mode and effects analysis, can also help, whether from the manufacturing, design, or human factors perspective. Using these outputs to guide development allows risks to be navigated and reduced as a project moves from an idea to a product that is ready for clinical trials and subsequent commercialization.

Verifying a product against a concept-specific and testable specification is one thing; from this one might expect to generate clear values that can be subjected to statistical analysis. Validation, however, requires going all the way back to the original list of user needs and proving that the device meets all those original requirements, not just the specifications that these were used to establish.

A good example of validation would be to carry out a human factors test in which the prototype is put into the hands of the patients. Importantly, they should be left to use it according to the instructions in the patient instruction leaflet. A clinical trial may also constitute validation that it does what it should.

Ultimately, it is important to remember the person for whom the device is being created: the patient. A device clearly needs to be robust, and deliver the product. But a design that is not patient-centric is unlikely to succeed. 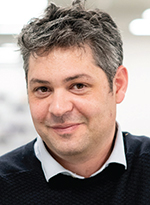 Andreas Meliniotis is Director of Device Development at Vectura, and leads the engineering and device development group based in Cambridge, UK. With over 15 years of experience at Vectura, he has led the design and development of several multi-dose dry powder inhalers as well as nebulizers and connected device technology. Prior to joining Vectura, he worked for the Cambridge Design Partnership and The Technology Partnership, developing glucose measurement devices and industrial printing technology, respectively. He is a Chartered Mechanical Engineer and Chartered Manager, and earned his Bachelor’s degree in Mechanical Engineering from the University of Nottingham, UK.