In Part 1 of this series (see Jan/Feb 2020 issue at www.drug-dev.com), I outlined the overall scope of the analysis and identified the need to appropriately segment approvals by Approval Type in the hope of gaining an understanding of the realities surrounding the Development and Review times for pharmaceutical products approved by the Drug Division of the FDA. In Part 2, I review the Development and Review Times associated with new molecular entity (NME) approvals throughout the 2010 to 2018 period. Readers are encouraged to refer to Part 1 in the series for an explanation of the terms and the limitations of the analysis.


The product development requirements for NME product approvals by the FDA are reasonably consistent. A company hoping to gain approval for a new product needs to provide sufficient information that establishes the safety and efficacy of the product for the intended application.

A total of 340 products incorporating an NME that received approval in the 2010 to 2018 period are available for analysis in terms of Development and Review Times. Development Time for the purpose of this analysis is the period of time calculated from the earlier of the start of clinical trials, a Pre-IND meeting, or the filing of an IND application, and the date the application for approval is filed with the FDA. Review Time is the period of time between the first filing of a drug approval application with the FDA and its first approval.

NME-approved products include New Drug Applications (NDAs) and Biologic License Applications (BLAs). The mean average Development and Review Time for the 340 products included in this analysis was 10 years. The mean average Review Time was 1.3 years, and the Development time was 8.8 years. This is longer than the mean averages of 8.2, 1.5, and 6.7 years found with the larger group NDA and BLA approvals (n=802), including NMEs and Previously Approved Actives (PAAs).

Development and Review Times for the 257 NDA approvals, non-biologics, involving NMEs is presented in Table 1. This group includes both Single Entity, Type 1, and Combination, Type 1,4 approvals.

In general, Single Entity Type 1 products took a little longer than the average of all NME approvals. Development Times were a little longer in terms of the mean average for Orphan- and Priority-designated products, although the medians were much lower. The longer mean average times for Type 1 NMEs are accounted for by a few products that took decades from first clinical trials to approval. These products were often tried for one or more indications early on, put on a shelf for one reason or another, and later dusted off and developed for the same or a new indication. Some other products experienced substantial delays after being “passed around” between companies because of portfolio or financial considerations. The median Development and Review Times perhaps provide a more realistic picture. Review Times were shorter for both Orphan and Priority products with a difference between the mean and median values accounted for by a few products that had delays associated with their initial regulatory filings.

The smaller cohort of 20 Combination Products were developed in a shorter period of time, 7.2 years, about 1 to 1.5 years quicker than other NME NDA approvals in terms of median and mean averages. These products as their name suggests combined an NME with another agent, generally a previously approved active. Often, these products addressed reasonably well-understood indications and incorporated an NME that was a second or third in class agent that was combined with a well-validated previously approved active. Examples include Hepatitis C and HIV products in which a new NME was either added to, or replaced a component of, a previously approved combination product. A very few of these approvals were for single-agent actives that were approved for use only in combination with another agent, for example, Braftovi and Mektovi.

BLAs represent a separate approval group from both a regulatory and legal perspective. Molecularly, they are large molecules derived from biological systems that are at best poorly characterized in terms of their secondary and tertiary structures and manufacturing processes. Despite these differences, their Development and Review Times are strikingly similar to that for small molecule NME products approved through the NDA process. There are currently no approved combination BLA products as defined by the FDA. In some cases, BLA products are used in combination with other agents but not as co-formulated products.

Biosimilars are approved as BLA products through the 351(k) regulatory pathway rather than the 351(a) pathway used for the more familiar originator BLA products. The Innovator and Biosimilar Development and Review Times are summarized in Table 3.

As a group, Innovator BLA approvals had mean average Development, Review, and combined Development and Review Times of 8.6, 1.1, and 9.7 years, respectively. This differed little from the Development and Review Times for NME approvals for NME small molecule NDA products in either the mean or medians. Innovator BLA products that qualified for Priority Review were developed and approved about 1 year more quickly than their non-Priority peers. Most of the saved time came during development, 1 year less, rather than during FDA review, -0.2 years.

Biosimilar BLA products were approved in a much shorter time than Innovator BLA products, about 3 years less. The time saved was typically seen in development rather during the review process, which was a bit longer, +0.2 years. The difference is accounted for by the more limited requirements for the approval of Biosimilars, albeit much more than what is required for small molecule generics.

When plotted on a single chart, some sense of a comparison becomes apparent between the Development and Review Times for all NDA and BLA approvals and the times for NME products, both BLA and NDA.

Among all NME approvals, the shortest Development and Review times was recorded by Wellstat Therapeutics’ Xuriden, uridine acetate, an NDA NME for the ultra-rare indication of uridine replacement therapy. It clocked in at 2.1 years from Pre-IND meeting to approval. This was after the FDA approached the company to develop the product because of perceived medical need. The company was granted a Pediatric Rare Disease Voucher, and the product received Orphan Product and Breakthrough Product designation along with Priority Review. The development program primarily involved a small Phase 3 trial. Development took 1.4 years, and regulatory review was 0.7 years.

Ultomiris recorded the shortest BLA NME Development and Review Times of 3.1 years. Alexion developed the product for the ultra-rare condition Paroxysmal Nocturnal Hemoglobinuria (PNH). The first human trial for the product began in November 2015 in Australia followed by FDA approval in December 2018. Given that there must have been some sort of earlier correspondence with the Australian regulatory authorities, it might be reasonable to add on another quarter year to normalize the overall review and approval time. Even then, development to approval would have been accomplished in 3.5 years, a remarkable feat aided by a 6-month FDA review. Close behind was Bio-Marin’s Brineura, which moved from first development to approval in 3.5 years for another orphan indication, Neuronal Ceroid Lipofuscinosis Type 2.

At the very long end is Jazz Pharmaceuticals’ Erwinaze, asparaginase Erwinia chrysanthemi, clocking in at 43.6 years. A BLA NME, Erwinaze is approved for the treatment of Acute Lymphoblastic Leukemia in patients allergic to the previously approved E. coli-derived asparaginase. The product bounced around between companies for decades. The original IND was filed by Ipsen in April 1968 and transferred to OPi SA in 2006, which was acquired by EUSA Pharma in 2007, followed by approval in 2011.

In general, NME approvals with Development and Review Times of more than 30 years were the victim of general indifference and were developed reasonably quickly once the appropriate resources were applied. Synribo (omacetaxine mepesuccinate) for example was the subject of a National Cancer Institute IND in 1981, with institutional trials starting in earnest in 1994. After sitting on a shelf, ChemGenex began development in 2001 with NDA submission in 2009 and approval in 2012. There is a similar story with Solosec (secnidazole), which was first approved in France in 1976. After seemingly being ignored for the US market for decades, the necessary work for FDA approval was quickly put together starting in 2013 with approval in 2017.

What conclusions can we draw from these numbers? What is a reasonable benchmark for the Development and Review Times for a product incorporating a new molecule entity?

The answer probably isn’t found in the means or the medians. The medians do suggest that once the switch is flipped to start clinical development, it is reasonable to expect it will take 9 to 10 years until FDA approval is received.

It may be more helpful to look at the shape of the distribution of Development and Review Times as presented in Figure 1. For NDA NME products, the Development and Review Times peak at between 8 and 9 years, less than the mean and median values. This is probably a reasonable starting point for estimating a target timeline. There are any number of products that took between 5 and 8 years. 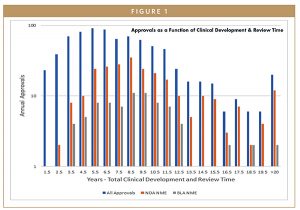 For BLA NME products, the means and medians are just a little greater than the peak of Development and Review Times seen in Figure 1. Any number of BLA products were approved in the 4- to 8-year range, again, suggesting that it would be appropriate to understand what led to these relatively quick development and approval programs.

Figure 1 also shows a number of products with Development and Review Times in the 1- to 5-year range. These are for the most part products approved using previously approved actives and the subject of Part 3 of these articles. This is a very heterogeneous group that used a number of different paths through development and approval.

Dr. Josef Bossart serves as Managing Director at The Pharmanumbers Group. He has 4 decades of experience in the biopharmaceutical industry, having held senior sales, marketing, operations, and business development positions within Big Pharma and emerging Specialty Pharma companies. His activities include analyzing corporate, technology, and product development strategies in the area of Drug Delivery. Dr. Bossart earned his PhD in Medicinal Chemistry from The Ohio State University.