CNS DELIVERY – Bypassing the BBB: Drug Delivery From the Olfactory Mucosa to the CNS

As therapeutic agents have evolved to treat central nervous system (CNS) afflictions, the blood brain barrier (BBB) has prevented the use of many of these drugs for treating neurodegenerative diseases, such as Alzheimer’s, Parkinson’s, tumors, and other CNS diseases.1-17 The BBB blocks entry of many traditional and newly discovered drugs inside the brain that can protect neurons; promote nerve repair; and cure, curtail, and treat many untreatable CNS diseases. This problem is partly resolved by the use of the intranasal olfactory mucosa to deliver therapeutic agents to the CNS bypassing through the BBB. This simple, rapid delivery route is ideal over any other micro-anatomical structure and site due to the unique connections and transportation routes between the nasal olfactory mucosa, 20 olfactory nerves, olfactory bulb, subarachnoid space cerebrospinal fluid (CSF), and CNS (Figures 1-6).13,17-24 The following will explore and explain how therapeutic and non-therapeutic agents, such as brain-eating amoeba,24 meningococcus, and rabies virus,20,23,24 and such can reach the brain, bypassing through the formidable BBB based on the unique micro-anatomic and physiologic characteristics of the nasal olfactory mucosal route and its CNS connections18 that allow transportation directly into the CNS. These findings are based on decades of our own as well others’ studies.3-11,16,18-22 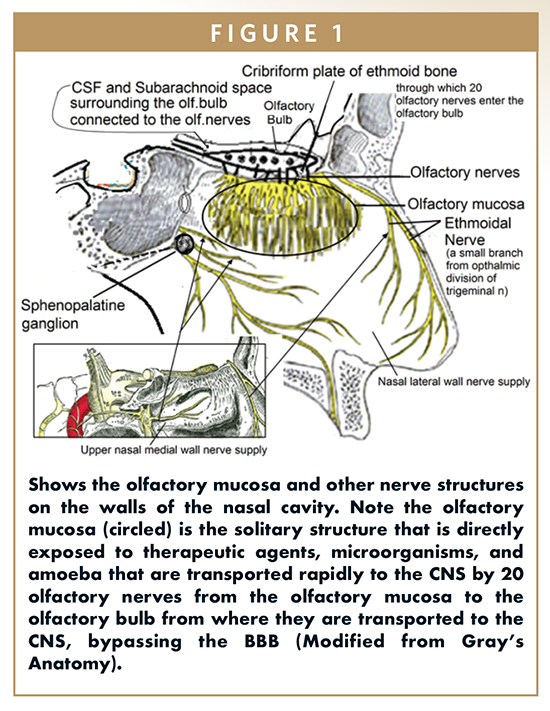 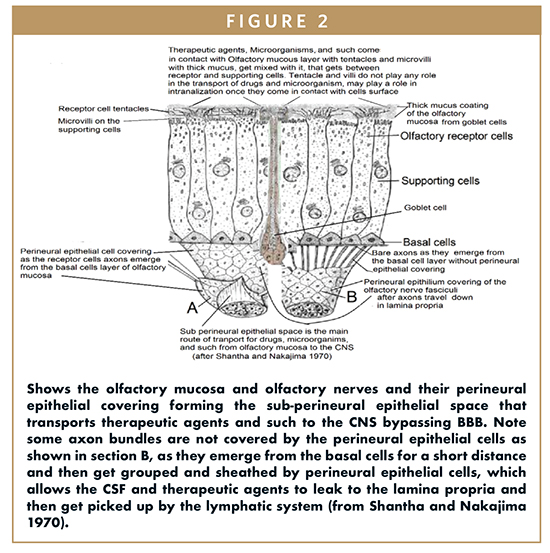 The olfactory mucosa is situated within the recesses of the skull under the cribriform plate of the ethmoid bone that forms the roof of the nose, situated 7 cm from the nostril, being positioned partly on the nasal septum and partly on the superior turbinate (Figures 1-4).11,17,18 It is not easily accessible in humans;17 hence, therapeutic agents need to be delivered to this narrow passage to treat CNS afflictions as described further (Figure 1). The olfactory mucosa is made up of a mucus layer situated on the top of the receptors cells, supporting cells between the receptor cell, basal cells below the receptor and supporting cells, and goblet cells extending from the lamina propria opening on the olfactory mucosa supplying the mucosal coating to the olfactory mucosa (Figures 2-5). The lamina propria, below the receptor and basal cells, has 20 olfactory nerve bundles with BV (ethmoidal) and lymphatics (deep cervical) surrounded by connective tissue, which form the epineural and perineural connective tissue around the 20 olfactory nerve trunks that are connected to olfactory bulb leptomeninges and dura.

There are 10 to 23 cilia from each receptor cell (extension of dendrites from receptor cells) and microvilli of the sustentacular cells embedded in a thick viscous layer of mucus secreted from goblet cells from the lamina propria that do not allow them to move and may also not participate in the transport of olfactory mucosa-delivered therapeutic agents. Based on our studies, there is a possibility that CSF surrounding the olfactory bulb seeps from the olfactory nerve fasciculi between these cells and emerging axons, supplying the neurotrophic factors, and at the same time, keeping the olfactory mucosa wet (Figures 1-4). A collection of axons form the olfactory nerves (olfactory nerves trunks or fasciculi) surrounded by perineural epithelial cells,18-20 not by Schwann cells,2,18 creating sub-perineural epithelial and inter-axonal spaces around each nerve fasciculus (Figures 5 & 6), which act as a highway and byway to the subarachnoid space around the olfactory bulb and brain. Our study for decades has shown that this perineural epithelial covering is a direct extension of pia-arachnoid mater extension from the olfactory bulb akin to the leptomeninges that cover the entire peripheral nervous system derived from the rest of the CNS (including sensory and motor end organs, perisynatpic cells of the motor endplate).19,20 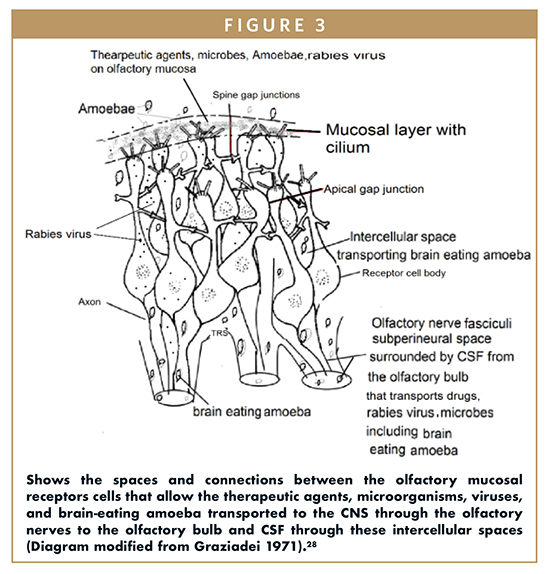 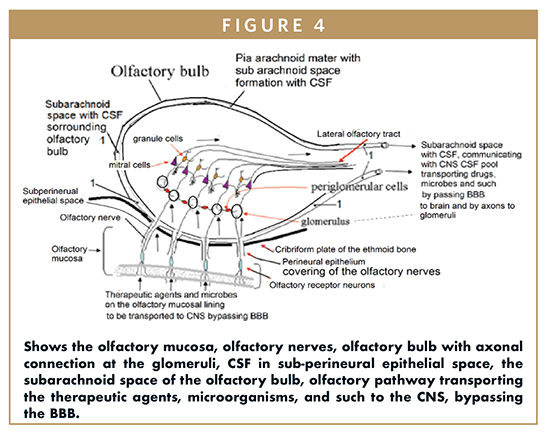 Without going into micro-anatomical detail, the following are the routes taken by therapeutic agents deposited on the olfactory mucosa through intra-neuronal and extra-neural pathways to various centers of the CNS bypassing the BBB based on decades of our own and others’ studies:

3. From the olfactory bulb subarachnoid space CSF (Figures 1, 4 & 5), therapeutic agents and microbes are transported to the CSF in the subarachnoid space, specifically to the suprachiasmatic and interpeduncular CSF cisterns (Figure 5) then to neuropile through the CNS Virchow-Robin space and blood vessels’ paravascular routes.

4. From this subarachnoid space and CSF cisterns, therapeutic agents spread to the temporal lobe, hypothalamus, thalamus, amygdala, entorhinal cortex, hippocampus, prefrontal cortex, and such (Figure 4 & 5). This is why we believe therapeutic agents to treat Parkinson’s, Alzheimer’s, and other neurodegenerative diseases can utilize insulin and other adjuvant therapeutic agents13,6,17 using these main transportation routes bypassing the BBB (Figure 3 & 5).

5. From the CSF pool around the olfactory bulb and brain, therapeutic agents spread to the subarachnoid space around the spinal cord due to CSF circulation and are distributed to the neuropile and neurons of the spinal cord through the Virchow-Robin space22 and parascular glymphatic routes.

6. Therapeutic agents from CSF delivered through olfactory nerves spread to the brain structures and neuropile through the CSF and subarachnoid space, the Virchow-Robin space, paravascular routes, and glymphatics deep into the brain and spinal cord to the site of pathology for healing.

7. Therapeutic agents and microbes from Virchow-Robin spaces22 around the CNS and peripheral NS penetrating blood vessels from the subarachnoid space are transported through the paravascular space formed around all the blood vessels of the brain and astroglial cells’ end-feet encasing these blood vessels (named the glymphatic space/channel/transportation routes). It is one of the most important transportation routes regarding how therapeutic agents from the olfactory mucosa to CSF reach deep brain neuronal structures in the treatment of CNS diseases, including Parkinson’s and Alzheimer’s diseases, evading and dodging the BBB. Brain metabolites also take the same exit routes to systemic circulation.27

8. Intra-axonal (transcellular-axoplasmic) spread results when therapeutic agents deposited in the olfactory mucosa are endocytosed by dendritic olfactory receptor cells, then to axoplasm of receptor cells and then into axons, olfactory nerves, olfactory bulb, glomeruli, then through the olfactory tracts axons to mitral and tufted cells, then to olfactory tubercle, amygdala, the prepyriform cortex, the anterior olfactory, nucleus, and the entorhinal cortex as well as to the hippocampus, hypothalamus, and thalamus (Figures 4 & 5). This is a very slow spread except for neurotrophic viruses, such as rabies.20,23

9. Therapeutic agents absorbed from the blood vessels of the olfactory and nasal mucosa reach the choroid plexus, then therapeutic agents permeate to the ventricle, central canal of the spinal cord, then to CSF and then to neuropile close to the ependymal lining from systemic absorption through the respiratory and nasal mucosa. Spreading through this route is minimal at best.

10. The olfactory mucosa is surrounded by valveless Batson plexus of veins25 that may uptake very small amounts of therapeutic agents from the lamina propria on turbinates and ethmoidal air sinus walls and transport them to the cavernous sinus, other venous sinuses, and to CSF in the subarachnoid space to be transported to neuropile as previously described.

11. The blood vessels (probably Batson plexus) and nerve root filaments on the medial walls of the ethmoid air sinus adjoining the olfactory mucosal lamina propria may transport minute quantities of therapeutic agents to CSF and then to the CNS. 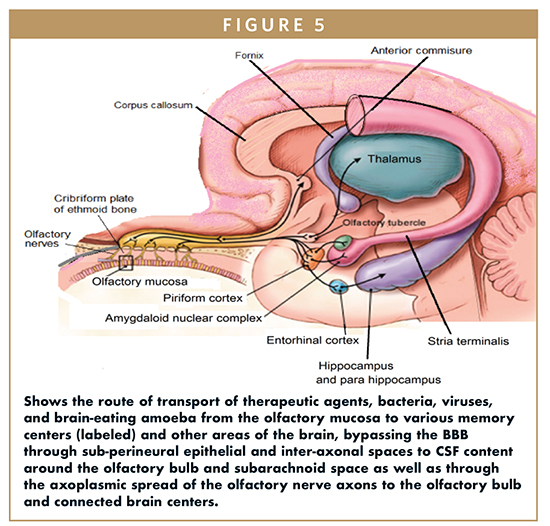 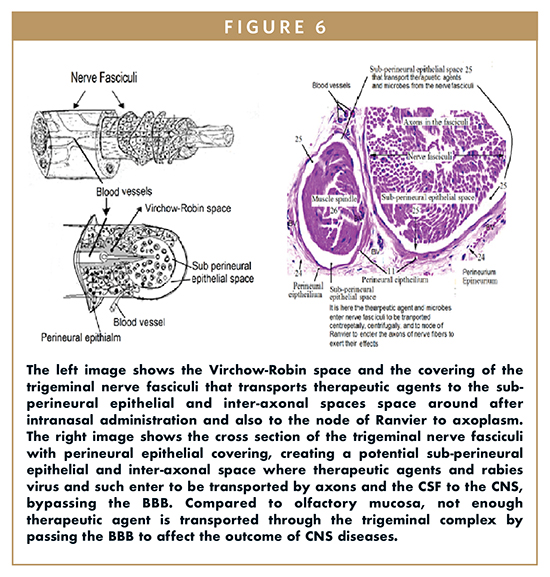 Figures 1-6 are self-explanatory and detail the structure and the possible route of transport of therapeutic agents and microbes from the olfactory mucosa to the CNS as previously described.

TRIGEMINAL NERVE BRANCH AS A ROUTE FOR TRANSPORT

Our studies showed that the only branches exposed in the olfactory mucosal region are the anterior ethmoidal nerve, a branch of ophthalmic division of the trigeminal nerve, and a small fasciculus branch from the sphenopalatine ganglion, not the entire trigeminal complex as reported and publicized.1,2,10 These small nerve fasciculi are covered with various connective tissue layers (epineural and perineural connective tissue) and multiple layers of perineural epithelial cells with sub-perineural epithelial and inter-axonal potential spaces that communicate with subarachnoid space CSF of the CNS and spinal cord (Figure 6) that has the potential to transport therapeutic agents to the CNS CSF.18-21 It is a slow route, and minimal to exert direct effect to cure or curtail CNS diseases. On the other hand, the trigeminal nerve complex plays a major role in the transport of rabies virus to the brain from the facial bites.20,23

We conclude that the olfactory mucosa, olfactory epithelium, olfactory nerves, sub-perineural epithelial and interaxonal spaces, olfactory bulb, olfactory bulb surrounding CSF, olfactory and suprachiasmatic tract along with suprachiasmatic cisterns and inter-peduncular cisterns, Virchow-Robin space, and glymphatic transport and clearance pathway, are the main necessary highways for the direct transport of therapeutic agents, microorganisms, viruses, and amoeba to the CNS, bypassing the BBB. There is a constant seepage with retrograde and downward flow of CSF from the olfactory bulb surrounding CSF to the lamina propria, lamina propria lymphatic, BV, and olfactory mucosa itself, and vice versa. Intranasal olfactory mucosal administration of therapeutic agents for the treatment of neurodegenerative and many CNS diseases overcomes the limitations due to the BBB, and provides an effective direct delivery method for a selective group of therapeutic agents to treat the brain regions that are pathologically affected with Alzheimer’s and Parkinson’s disease as well as other CNS diseases. 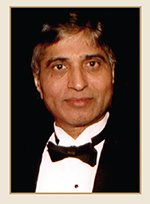 T.R. Shantha, MD, has been a member of the faculty of Emory University School of Medicine, Medical College of Georgia, Grady Memorial Hospital, Georgia Baptist Hospital, Columbus Medical Center, and is presently a visiting professor at JJM Medical College. He has published more than 100 research articles since 1962 in peer-reviewed reputable journals, including Nature (7 papers), Science, NEJM, J Urology, Anesthesia, Anatomy, Exp. Eye Research, American J of Physiology, etc. He discovered Terbutalene as a treatment for Priapism, which is now used all over the world as the first line of treatment in emergency rooms and by urologists. He has won numerous awards for his academic contributions, including AMA and AAPI distinguished physician awards. He was one of the nominees for the Nobel Prize in Physiology and Medicine in 2007 for his and Dr. Bourne’s research work on the membranes of the nervous system discovered at Emory University. His work is quoted in many medical textbooks and research literature. He has more than 56 patent applications, many published and issued. He is presently working on the treatment of Alzheimer’s and Parkinson’s disease, sleep apnea, and other CNS diseases.