Regenerative medicine is not all that new; tissue and organ transplants have been around for decades. However, the Mayo Clinic has said, “But advances in developmental and cell biology, immunology, and other fields have unlocked new opportunities to refine existing regenerative therapies and develop novel ones.” It has also stated, “Regenerative medicine is a game-changing area of medicine with the potential to fully heal damaged tissues and organs, offering solutions and hope for people who have conditions that today are beyond repair. Within regenerative medicine, some of the most noteworthy developments are coming from the area of tissue engineering. Combining cells with scaffolding materials to generate functional tissue constructs describes tissue engineering at its most basic level.” 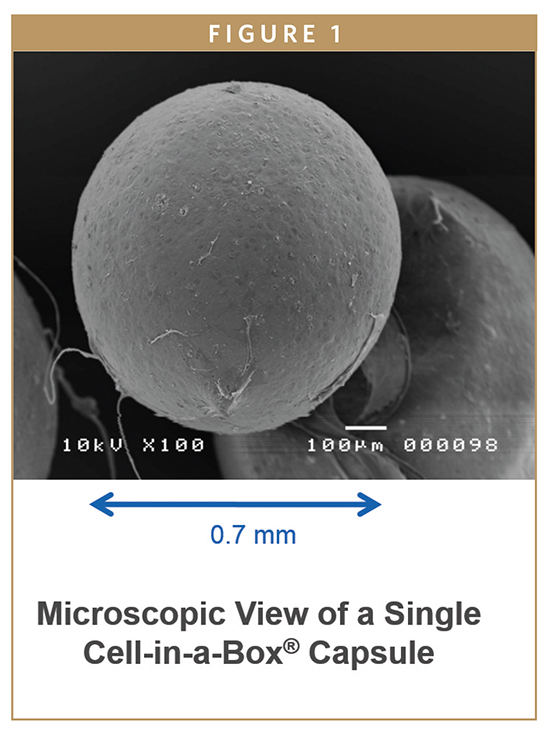 The rejection of transplanted tissue has been one of the major stumbling blocks in the treatment of many chronic and age-related conditions. Immune suppressors are one avenue for dealing with rejection, but tissue engineering by way of cellular microencapsulation offers a different, and likely better, path.

Microencapsulation is a process by which very tiny droplets or particles of liquid or solid material are surrounded or coated with a continuous film of polymeric material. Most microcapsules have diameters between a few micrometers and a few millimeters. The idea was based on natural subcellular organelles, which contain proteins, growth factors, or enzymes. The first suggestion was made in 1964 that encapsulation could be used to replace cells or cell products lost due to genetic defects.

The polymeric material essentially creates a wall that protects the encapsulated cells from rejection by the body’s immune system. This means that an organ could be grown in a bioreactor to replace a diseased organ, and the risk of rejection would be virtually eliminated. Harvard Apparatus has already grown and implanted an artificial trachea grown from the patient’s own stem cells.

At the same time, microencapsulation offers various significant advantages as a drug or treatment delivery system, including: (i) an effective protection of the encapsulated active agent or encapsulated live cells against degradation or destruction by the immune system, (ii) the possibility to accurately control the release rate of an incorporated drug over periods of hours to months, (iii) an easy administration (compared to alternative parenteral controlled release dosage forms, such as macro-sized implants), and (iv) the provision of desired, pre-programmed drug-release profiles which match the therapeutic needs of the patient.

One of the areas in which this technology is most useful is in the treatment of neurological disorders. Many drugs to treat maladies of the brain and central nervous system are administered orally, but they cannot cross the blood-brain barrier readily. One of the main advantages of cell microencapsulation is for the treatment of neurological disorders in which some drugs have potential therapeutic possibilities, such as growth factors or peptides, however, only at low and constant concentrations. These microcapsules implants are able to secrete only the drug required by the damaged tissue, because the implants with microencapsulated cell are formed by live cells.

NTCELL is in Phase I/IIa clinical trial in New Zealand for the treatment of Parkinson’s disease. It has the potential to be used in a number of other central nervous system indications, such as Huntington’s, Alzheimer’s, and motor neuron diseases.

DIABETES: ENCAPSULATED CELLS MAY BE THE PATH TO A CURE

Another condition microencapsulation can address is type 1 diabetes. In type 1 diabetics, their insulin-producing cells (beta islet cells of the pancreas) have been permanently destroyed by an autoimmune disease.

According to Novo Nordisk’s 2014 annual report, there are two things needed to cure this condition: (i) a means to trigger stem cells to make unlimited quantities of insulin-producing cells, and (ii) a means to encapsulate these cells so that the immune system doesn’t destroy them while at the same time allowing the encapsulated cells to respond to glucose levels by producing insulin.

A research team at Harvard has found a solution to the first issue, and Astra Zeneca has recently linked up with that team to continue the work.

Living Cell Technologies has formed a joint venture with Japan’s Otsuka Pharmaceutical Factory to develop LCT’s DIABECELL. This product consists of encapsulated islet cells that produce insulin and that are sourced from pathogen-free pigs.

Another entrant into the type 1 diabetes cure sweepstakes is San Diego-based ViaCyte. In concert with the Juvenile Diabetes Research Foundation (JDRF), the leading research and advocacy organization funding type 1 diabetes research, ViaCyte filed an IND application with the FDA in the summer of 2014. ViaCyte wants to initiate a Phase I/II diabetes clinical trial to evaluate the safety and efficacy of its VC-01TM product candidate, a stem cell-derived, encapsulated cell replacement therapy. In a related development, ViaCyte submitted a Medical Device Master File (called MAF) to the FDA in support of the Encaptra® drug delivery system, the device component of the VC-01 product candidate. 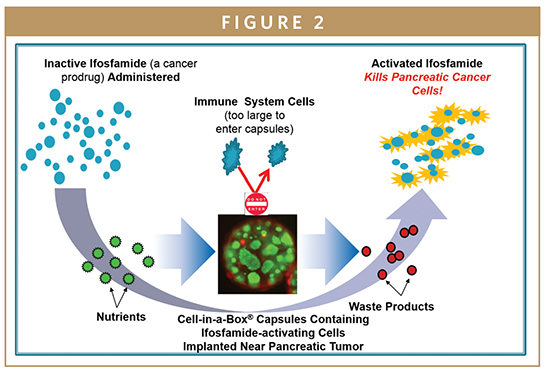 PharmaCyte has obtained an exclusive worldwide license to use Melligen cells in developing a treatment for insulin-dependent diabetes. This line of cells was developed by Professor Ann Simpson and her colleagues at the University of Technology, Sydney (UTS) in Australia. Melligen cells were shown to be effective in reversing the diabetic condition in grossly diabetic mice whose immune systems were suppressed. PharmaCyte intends to use Melligen cells encapsulated using the Cell-in-a-Box technology in the pursuit of a treatment for insulin-dependent diabetes.

PharmaCyte is also looking into the treatment of pancreatic cancer using Cell-in-a-Box-encapsulated genetically engineered live cells designed to convert the well-known cancer prodrug ifosfamide into its cancer-killing form using only one-third of the “normal” dose of the chemotherapy drug. PharmaCyte Biotech’s pancreatic cancer treatment was given the Orphan Drug designation by the FDA in December 2014. A similar designation has been granted by the European Medicines Agency (EMA) in the EU.

In a Phase I/II clinical trial, 14 elderly and very sick patients with advanced, inoperable pancreatic cancer were treated at a single study site in Germany with the combination of Cell-in-a-Box plus two courses of low dose ifosfamide. A single implantation (near the pancreatic cancer) of 300 Cell-in-a-Box capsules containing ifosfamide-activating cells was given to each patient.

The results from this trial showed that the Cell-in-a-Box plus low-dose ifosfamide combination increased the average lifespan of patients from about 5.7 months for gemcitabine (the “gold standard” for the treatment of pancreatic cancer at the time) to about 11 months with the combination therapy, and doubled the percentage of 1-year survivors from 18% to 36%, without any treatment-related side effects. The major conclusion was that the combination of Cell-in-a-Box plus low-dose ifosfamide was a safe and effective treatment for patients with advanced, inoperable pancreatic cancer. 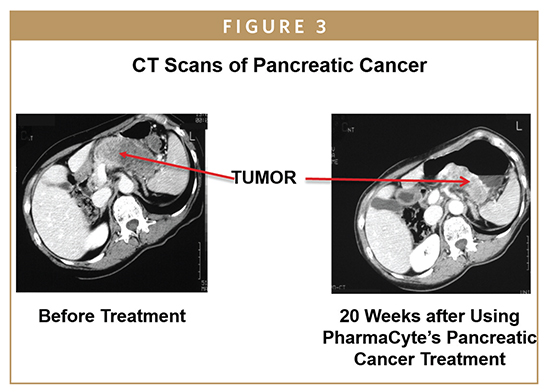 A Phase II trial done with the Cell-in-a- Box plus ifosfamide combination was also a single-arm study. Here, 13 patients were treated at four study sites in Europe, but in this trial, the dose of ifosfamide was doubled to two-thirds of normal to see if there would be improved anti-tumor effects. Again, two courses of ifosfamide were given. The main conclusion was that the combination of Cell-in-a-Box plus one-third the normal dose of ifosfamide was the most appropriate combination to use in all future clinical trials for a safe and effective treatment of advanced, inoperable pancreatic cancer.

Now, a Phase IIb clinical trial is being planned for the U.S., Europe and Australia. This trial will be a multi-site, randomized study in which PharmaCyte Biotech’s pancreatic cancer treatment will be compared head-to-head as a consolidation therapy with a currently used chemotherapy plus radiation treatment in patients with inoperable, non-metastatic disease whose tumors have ceased to respond to 4-6 months of treatment with the current “gold standard” for pancreatic cancer treatment, the combination of the drugs gemcitabine plus Abraxane®. The two consilidation therapies will be compared for effects on patient survival, tumor size, whether they can change inoperable tumors into operable ones, on pain associated with the cancer, and on the safety of the treatments and their effects patients’ quality of life.

A major problem associated with the development of abdominal cancers is their production of malignant ascites fluid that accumulates significantly in the abdominal cavity. This fluid contains cancer cells which can “seed” and form new tumors. Also, as ascites fluid accumulates, the abdomen becomes distended and painful and this accumulation can be life-threatening.

As such, it must be removed on a periodic basis – a painful and costly procedure. A series of preclinical studies in mice bearing abdominal cancers is being done now in the US for PharmaCyte Biotech by Translational Drug Development (TD2) to determine the parameters under which PharmaCyte’s pancreatic cancer treatment can slow the production and accumulation of this ascites fluid. Once these parameters are established, a Phase I/II clinical trial will be conducted by Translational Drug Development (TD2).

Although type 1 diabetes can begin at an early age, as our population ages, chronic and age-related conditions, such as various cancers, are increasing in frequency. Until now, managing them has been the only medical option. Drug or treatment delivery that employs microencapsulation, one of many promising developments in the field of regenerative medicine, offers not only treatments but also potential cures for a wide variety of maladies, from diabetes to cancers to neurological problems. 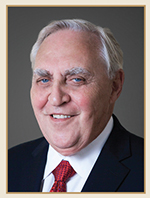 Dr. Gerald W. Crabtree is PharmaCyte’s Biotech’s Chief Operating Officer. For much of his 45-year career, he has been active in cancer research and cancer drug development. Since 1985, Dr. Crabtree has been involved with various biopharmaceutical and biotech companies, where he has participated in or coordinated the development of multiple drug candidates, assisted in the preparation of clinical protocols and investigator brochures, participated in clinical trials, prepared drug monographs, co-authored research and review articles, and served as project manager for development of a major oncologic agent. He is a member of the American Society of Clinical Oncology and the American Association for Cancer Research and is also is a past member of research grant review committees for the National Institute of Health and the American Cancer Society. Dr. Crabtree established and directed, from inception, a department that monitored and coordinated the development of oncologic and immunologic drugs from initial discovery through regulatory approval in a major pharmaceutical company and served as project manager for the development of the anticancer agent, Taxol®. He earned his PhD in Biochemistry from the University of Alberta, Edmonton, Alberta, Canada in 1970 and has published over 80 articles in peer-reviewed journals.