Autism spectrum disorder (ASD) is a disorder of brain development that impacts neural processing in affected individuals. Problems with communication and socialization present challenges for families coping with more severe forms of the disorder. The term “spectrum” in ASD refers to the wide range of symptoms and severity encountered, from gainfully employed “high-functioning” individuals to those severely impaired, requiring continuous care and supervision.1,2

ASD generally begins in early childhood, with symptoms eventually causing problems at home and in school. Symptoms of autism often appear within the first year. But some children seem to develop normally then regress between 18 and 24 months of age, when they may suddenly become withdrawn, aggressive, and lose previously acquired language skills and other developmental milestones.

In addition to communication and social interaction problems, ASD patients may exhibit repetitive patterns of behavior. These include but are not limited to the following:

-Speaking with abnormal tone or rhythm

-Repetition of words or phrases verbatim

-Repetitive movements, such as rocking, spinning, or hand flapping, and activities causing self-harm, such as biting or headbanging

-Adherence to specific routines or rituals with difficulties to slightest change

-Problems with coordination and odd movement patterns, such as toe walking, and odd exaggerated body postures

-Unusual sensitivity to light, sound, or touch, yet indifferent to pain or temperature

-Fixating on objects or activities with extreme intensity and focus

-Specific food preferences, refusing those with a certain textures

Signs and symptoms of autism suggest problems in brain sensory processing and outflow from neurochemical and electrical dysfunction. Such abnormalities may be reflected in EEG, electroencephalogram, an objective indication of brain electrical activity, measured through electrodes placed on the skull (Figure 1). The procedure is non-invasive and not painful. 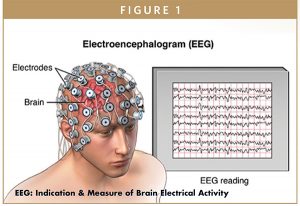 A normal EEG does not necessarily indicate the absence of a brain electrical problem as events, such as seizures and other abnormal electrical activity, may be episodic, occurring intermittently. In ASD, such episodic phenomena may be in the form of seizures of various forms, sudden mood swings accompanied by agitation and impulsivity, staring spells with loss of focus and attention, and repetitive movements, such as grimacing, twitches, flapping, and automatisms involving the lips, face, and hands. 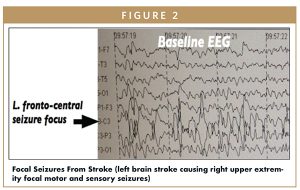 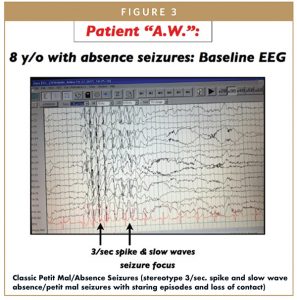 CBD and other cannabinoids have recently become important therapeutic considerations in a number of neuropsychiatric disorders. Starting first with seizures, they are now being used in ADHD, mood disorders, insomnia, Parkinson’s disease, and other conditions. Autism spectrum disorder is no exception. Cannabinoids have a wide scope of medical applications as they influence neurotransmission, immune function, and inflammation, and preserve cellular homeostasis and function, among other things.

CBD is not psychoactive and does not produce a “high” associated with the cannabinoid THC. CBD’s other functions and potential uses include the following:

-Preventing memory loss, which can be associated with THC

-Decreases symptoms of social anxiety and isolation (useful for autism, fibromyalgia, and PTSD)

The mechanism of action by which CBD and other cannabinoids exert therapeutic benefit is through activity on CB1 and CB2 receptors of the human endocannabinoid system, ECS. ECS exists to modulate many systems within the body; of particular relevance to ASD are the neurological, immune, and gastrointestinal (GI) systems.

A concern arising from use of cannabinoids in children is potential long-term effects of chronic systemic exposure on developing brains. Non-systemic delivery of neuro-active compounds, including CBD and other cannabinoids, through topical NeuroDirect EffectsTM may provide a solution to this potential problem.4

As embryonic tissue, neuroectoderm, forms both the CNS (brain and spinal cord) and skin, there exist neuro-chemical receptors on free nerve-endings in skin in communication with the CNS, providing continuous neural information for processing and interpretation. The free nerve-ending is a peripheral end component of spinal cord dorsal ganglia, primary processing site of neural input before entering the CNS. Exposed receptors on cutaneous nerve-endings can be activated by therapeutic compounds applied topically to skin surface. These include receptors to endogenous agonists serotonin, norepinephrine, dopamine, acetylcholine; as well as to endorphins, TRPV1, nerve growth factor; and, CB1 and CB2 receptors to cannabinoids (Figures 4 & 5). 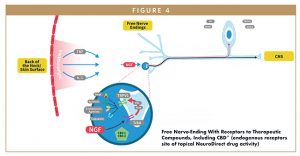 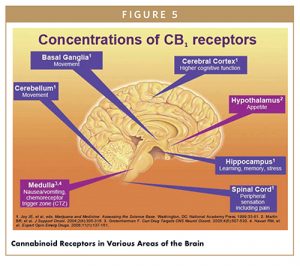 Neuro-active drugs, such as CBD, may be compounded in epidermal penetrating medium to activate cannabinoid receptors on skin nerve-endings, resulting in local neurochemical reaction and formation of nerve action potential to the CNS. Therapeutic effects are achieved as respective brain receptors are activated. Over 40 such compounds have been studied and utilized in this manner, resulting in granting of 10 patents in the US and abroad. Of interest is that in all preparations, therapeutic benefit was realized within 5 to 8 minutes of topical drug application without usual systemic side effects. This is not surprising as cutaneous receptor activation and nerve conduction times to the CNS in individuals do not vary appreciably. However, with systemic delivery, there exist individual variations in GI transit and absorption, cardiac function, blood flow, and metabolic factors.

For brain disorders, as are encountered in ASD, the critical area of topical drug application is at back of the neck at the hairline (BONATHTM). This is the same when treating seizures, headaches, mood disorders, attentional issues, nervous tics/Tourette’s, and other CNS-derived symptoms. At BONATH, one can readily access Trigeminal and Vagal Nerve afferent networks through NeuroDirect Effects Technology topical drug application (Figure 6).5-8 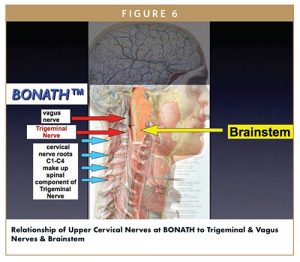 -All had abnormal baseline EEGs; 60% with epileptiform characteristics

-Patients continued therapy long-term, 2 to 3 times per day, with persistent benefit, often with ability to reduce or completely taper off prior pharmaceutical agents

The advantage of using CBD is that it capitalizes on the body’s own ECS, and as such, modulates brain neurochemical and electrical functions that are likely not functioning optimally in ASD. Accordingly, it targets the root causes of symptoms, rather than just treating or covering them up. Table 1 shows varying symptoms that may be helped by the neuro-modulatory effects of NeuroDirect CBD, many of which are observed in ASD. Commonly encountered side effects of current systemic symptomatic treatments of ASD include the following:

-Benzodiazepines can cause lethargy, cognitive blunting, dependency, and have potential for withdrawal phenomena, including seizures 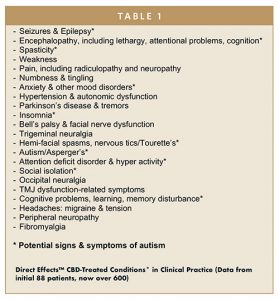 -Tried Dilantin, Phenobarbital, Depakote without benefit; Topamax worked, but side effects were intolerable

While there is no cure for ASD, intensive, early treatment can make a difference in the lives of many affected children, providing opportunity to lead productive lives. NeuroDirect Effects Technology CBD is particularly attractive in this population as it utilizes the body’s own ECS. In utilizing a non-systemic therapeutic mechanism, there is less likelihood for long-term negative effects in developing brains of children. 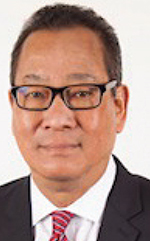 Dr. Ronald Aung-Din practices General Neurology & Neuro-Psychiatry in Sarasota, FL. He is board-certified by the American Board of Psychiatry & Neurology and a member of the American Academy of Neurology. After earning Bachelor’s and Master’s degrees in Engineering at Bucknell and Cornell, he then attended Columbia University for Premedical studies; followed by Medical School at the University of Texas Southwestern Medical School. Residencies in Neurosurgery and Neurology were at University of Florida. He has participated in over 60 pharmaceutical industry-sponsored clinical trials, functioning as Principal Investigator in drug research studies in MS, epilepsy, pain, Parkinson’s disease, and other neurological diseases. He is also active in treating varied neurological and psychiatric conditions using delivery of CNS-active drugs with Neuro-Direct Technology™, developed by him for which 10 US and foreign patents have been granted; with others pending. Publications using this novel therapy in migraine, Parkinson’s disease, and diabetic neuropathy; in addition to articles on the use of cannabidiol, CBD, and the noncannabis cannabinoid receptor agonist, caryophyllene, have appeared in Drug Development & Delivery. He founded AfGin Pharma, LLC (afginpharma.com) in 2009 to advance the technology and its goal of Enhanced Neuro-Therapeutics through Direct Effects Topical Technology.