THE BUCCAL REGION – AN ADVANTAGEOUS ROUTE FOR DRUG DELIVERY

Innovations in drug delivery hold the promise of minimizing dose-dependent side effects and maximizing biological activity while improving patient adherence.

Peroral administration of drugs, the preferred route of drug administration in terms of patient experience, has several disadvantages, such as hepatic first-pass metabolism, longer onset of action, and enzymatic degradation of drugs within the gastrointestinal (GI) tract. When GI and hepatic degradation limit a drug’s safety or efficacy, invasive injections are often the only viable mode of delivery – with the potential consequence of lower patient adherence.

Buccal administration can achieve local and systemic effects and is attractive in that it overcomes the deficiencies of peroral administration. Indeed, substances absorbed through the buccal mucosa bypass gastrointestinal enzymatic degradation and the hepatic first-pass effect. Buccal administration further represents a better alternative to injections or tablets for those patients who have difficulty swallowing.

What is the Buccal Site?

The buccal area is the inner lining of the cheek and lip, representing about one third of the surface area of the oral cavity (Figure 1).1 The buccal mucosa consists of a surface layer of stratified squamous epithelium linked to the underlying connective tissue by a basal lamina. A network of blood capillaries is present in the connective tissue where drugs that have permeated through the epithelium can enter the systemic circulation via the internal jugular vein.2 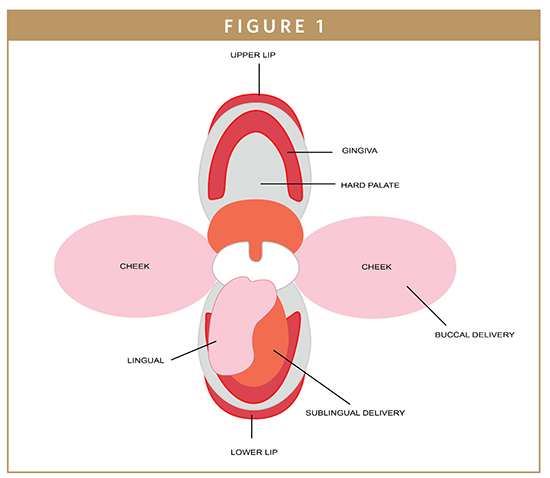 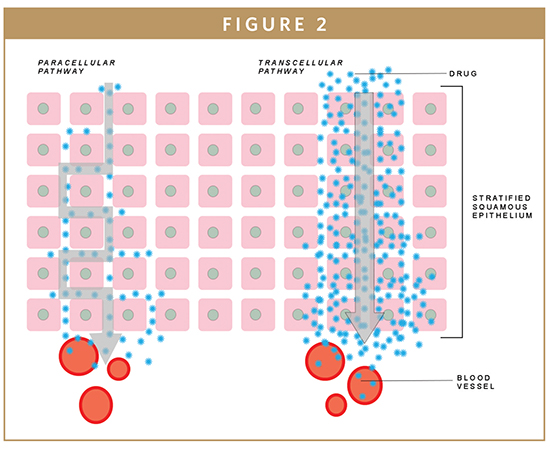 The Importance of Mucoadhesion
Mucoadhesion is when two surfaces, one of which is a mucous membrane, adhere to each other. It is a critical parameter for buccal administration and formulation materials with optimal adhesive properties to be selected. Mucoadhesion happens in two stages – the contact stage followed by the consolidation stage when adhesive interactions are established. There are likely multiple mechanisms at play causing adhesion. Importantly, adhesive joint failure will occur as a result of overhydration of a dosage form, or as a result of epithelia or mucus turnover. The turnover time for the buccal epithelium has been estimated to be 3 to 8 days compared to about 30 days for the skin.4

In addition to the major benefit of systemic delivery that bypasses liver and gut degradation for greater bioavailability and lesser side effects, the mouth has a relatively large area for drug application and good accessibility compared to the nose, rectum, and vagina.5 Also, the rapid cell turnover in the buccal mucosa reduces the risk of tissue damage or irritation.6 While the sublingual mucosa is more permeable, vascularized and thinner than the buccal mucosa, the surface of this mucosa is smaller, constantly washed by the saliva, and the shear exerted by the tongue makes it difficult to maintain the dosage form in contact with the sublingual mucosa.7 For all of these reasons, the cheek mucosa is a preferred site within the oral cavity for the administration of controlled-release systems that need to adhere for an extended period of time.8

Site Limitations
Enhancing the rate of absorbance (μg/mm2/s) or permeability of the buccal tissue is often necessary to compensate for the limited surface area available. The use of permeation enhancers (ie, substances that reorganize the epidermis or epithelial structures or open up the intercellular tight junctions) is very important in this area. Macromolecules are more complex to deliver through the mucosa due to enzymatic degradation of the saliva and poor permeation across the buccal epithelium without chemical- and electrical-based permeation enhancement.9 The improper use of permeation enhancers can cause safety concerns as far as local tissue irritation but also as a result of an undesired bolus effect that pushes up the concentration of drug in the blood to levels that are not safe.

An alternative strategy for ensuring higher absorbance of poorly soluble or permeable drugs into the tissue is to increase the dwell time in the mouth. As with permeation enhancers, increasing the dwell time can cause tissue irritation as well as patient discomfort and requires careful evaluation of both immediate and long-term effects on tissue integrity and functionality. Increasing the dwell time in the oral cavity can further be challenging as the drug can be rapidly eliminated due to the flushing action of saliva. As a result, repeated and frequent doses may be needed, unless the dosage form creates a strong bond with the absorbing mucosa. Research is needed to quantify how much salivary flushing affects the efficiency of oral transmucosal delivery from different drug delivery systems.

Human factors are important to take into account when developing a buccal product. Given that the buccal mucosa extends from the upper and lower spaces between the cheeks, lips, and gums, the precise location where the patient places the dosage form may affect the adherence and absorption of the drug, and these human factors implications can affect interpatient variability. How the dosage form is placed can cause additional complications when the dosage form is designed for unidirectional release and has a specific adhesive side to be placed against the inner cheek. Lastly, when and what the patient eats, drinks, or smokes can further affect the absorption of the drug through the mucosa.

The risk of dislodgement and patient variability due to saliva stimulation can be minimized if the drug is administered over night for example, when the patient is not eating or speaking.

Buccal Dosage Forms
Although the buccal mucosa is only now being extensively studied as a novel drug delivery route, its potential for drug delivery has been known to mankind for centuries. Native Americans introduced chewing tobacco to European settlers in the 1500s, and coca leaves were chewed 8,000 years ago by Peruvian foragers. The buccal mucosa has been targeted using conventional dosage forms, such as tablets, troches and lozenges, and mouth washes and sprays, with several such products currently on the market. The challenge is in holding these dosage forms at the site of absorption, dosing precision (liquids) and discomfort (tablets). Tablets have the potential to separate from the mucosa, be swallowed, and then adhere to the wall of the esophagus causing a choking hazard, especially for children and the elderly.

More advanced drug delivery systems include films, patches, bilayer tablets, hydrogels, and tapes along with the use of micro- and nano-particulates are being developed to overcome the limitations of conventional dosage forms.

Film compositions are designed to achieve the following physical properties: bioadhesive strength, tensile strength, pliability, flexibility, and extended disintegration. These properties are critical to achieve the target drug-release profile, patient acceptability, and compatibility with commercial manufacturing processes. Achieving the target specifications of buccal polymeric films is highly dependent on the type and concentration of the selected polymers and the dose of active ingredients being delivered.

As discussed here, even with a strongly adhesive film, the salivary flush will cause part of the film to dissolve in the oral cavity and be swallowed. Dual-layer films with an occlusive backing layer have been designed to drive unidirectional drug release and absorption into the buccal mucosa and can deliver high doses of active ingredient. While such designs can improve buccal absorption, they present several drawbacks. They can lead to user error in their application, the occlusive layer can dislodge and become a choking hazard, and lastly, the complexity of scaling up a dual-layer film drives up manufacturing costs.

Taking these constraints into consideration, CURE Pharmaceutical’s approach to buccal film development with CUREfilm leverages the inevitable salivary flush of a single layer film to create better drug-release profiles. We design our products to combine the fast onset bolus effect of buccal delivery with the extended release of GI delivery to achieve an overall pulsatileor sustained-release profile. Indeed, with buccal delivery, blood levels can peak quickly, and a shorter half-life can mean the effect wears off rapidly. Also, if delivering high doses of a drug solely buccally (eg, over 100 mg), the local tissue concentration could be too high and damage the tissue. A single layer approach is preferable as it minimizes costs and user error.

To create a buccal CUREfilm, a carefully selected blend of polymers, permeation enhancers, and lipids are combined to optimize adherence, drug diffusion, and permeation through the mucosa. Lipids play a crucial role in solubilization and stability of active ingredients. They help drive hydrophilic compounds through the mucosal epithelium and promote trans-cellular transport of lipophilic compounds through the epithelium to reach the blood vessels. Nano-particulation of the active ingredient can provide an additional arrow in the formulator’s quiver to increase the rate of absorption.

To achieve sufficient gastric protection and efficient intestinal release of the portion of drug that is swallowed, drug particles can be fully or partially encapsulated, enteric coated, or cross-linked to polymers, such as chitosan, prior to their incorporation into the film matrix. Other strategies include liposomal or micellar formation, co-crystallization, and the use of gelling or swellable polymers.

This dual strategy can be very useful for combination drugs with different metabolic profiles in which one drug is prepared for buccal absorption (ie, if it has a high first pass effect), and the other is prepared for release in the GI.

The actual design and construction of an oral film capable of effective therapeutic delivery can be challenging and requires the creation of new technologies. As a result of these innovations, buccal films are now a commercially viable dosage form that can solve many problems faced by the pharmaceutical industry, patients, and their caregivers. They will be able to replace daily injections, such as apomorphine shots taken by patients suffering from Parkinson’s disease. They can improve the bioavailability of drugs, such as cannabinoids, potentially lowering their dose and psychoactive side effects. When rapid symptom relief is needed, they can deliver a bolus effect. They are a convenient alternative to unpalatable liquids for children and hard-to-swallow pills for the elderly.

Given the important unmet market needs they address, the rate of adoption of oral films has been high. Indeed, the global market was valued at $2.1 billion in 2017 and is anticipated to expand at a CAGR of 13% during the forecast period from 2018 to 2026.14 This commercial growth of oral films, including buccal films, reflects the pharmaceutical industry’s increased focus on patient-centered innovation in the development of new medicines and the improvement of old medicines – where patient experience drives drug delivery design, which in turn improves patient outcomes. 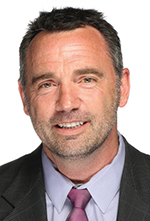 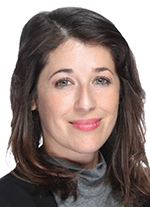 Jessica Rousset is CURE’s Chief Operating Officer. Mrs. Rousset oversees operations and drives corporate strategy and growth. Mrs. Rousset previously served as Head of Innovation at Children’s Hospital Los Angeles, where over a ten-year period, she helped launch both therapeutic and medical device companies and founded and operated a national pediatric technology accelerator. Prior to that, Mrs. Rousset held positions at The Scripps Research Institute and GlaxoSmithkline Biologicals in laboratory, clinical research and business development roles. She trained as a biochemical engineer at the Institut National des Sciences Appliquées in Lyon, France.