BIOPROCESSING – A New Era: Why the Time Has Come for Biopharma to Move to Continuous Bioprocessing

The pharmaceutical industry is approaching a watershed moment when it comes to drug manufacture. Rising cost pressures, market paradigm moves toward outcome-based medicine, fierce competition, and the ever-greater demand created by a growing and aging population are all putting unprecedented pressure on the sector. More complex therapeutics in greater numbers must be produced quicker and more cost effectively than ever before – and the industry is struggling to keep up.

One of the fundamental reasons for this growing strain is that despite billions of dollars being invested into the industry every year, the methods used in drug manufacture haven’t changed substantially in decades, resulting in an ever-decreasing return on investment for R&D efforts within the pharma sector. While other manufacturing arenas have embraced continuous flow manufacturing or continuous processing and seen huge improvements in efficacy, reliability, control, and cost reduction, biopharma is in danger of falling behind. 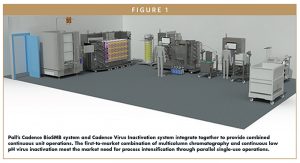 There are myriad reasons for this. In such a highly regulated sector, manufacturers have often voiced fears of contamination risks and control issues, both of which are – often incorrectly – associated with continuous processes. There are practical financial considerations too: significant capital has been invested in stainless steel plants throughout the years, and large manufacturers are understandably reticent to shift to continuous manufacturing, which largely uses single-use systems.

But times are changing. Biopharmaceutical companies, finding themselves in an increasingly precarious position and concerned about the efficiency of their manufacturing operations, are looking beyond traditional batch processing to a new way of creating complex and diverse new drugs.

The question is how much potential does continuous bioprocessing really hold for the biopharmaceutical industry, and will manufacturers be able to navigate the perceived obstacles and truly move beyond batch processing to a continuous future?

From a purely financial perspective, it’s hard to argue against the move from traditional batch processing to continuous manufacturing. Industries like automotive, aerospace, food, and metal product have been using continuous manufacturing processes for many years, and the benefits have been remarkable. Increased efficacy and reliability, reduced capital costs and failure rates, improved process control, and accelerated speed of bringing new products to market are just some of the improvements that continuous processes are driving in manufacturing companies around the world.

Now, the biopharmaceutical sector’s early adopters of continuous are beginning to reap similar financial rewards; already demonstrating that continuous bioprocessing offers the single greatest opportunity for large-scale cost-savings in biomanufacturing on a number of levels. Drug manufacturers that have adopted continuous have seen a huge reduction in the size of single-use components. The implementation of more purification cycles to produce more product, as an alternative to scaling up, can decrease consumable spending by remarkable proportions.

Chromatography – usually the most cost-intensive aspect of downstream bioprocessing – offers perhaps the most striking example of the potential savings offered by continuous. Protein A sorbents used in the primary capture step, for example, can cost over $10,000 per litre. However, by optimizing the number of columns needed to operate this process, manufacturers can enable reductions in reagent use of up to 90%. This vastly improves the efficiency of consumable use, while also reducing the need for large tanks, buffer-storage bags, and other equipment – all of which takes cost out of the manufacturing process.

The improvements in utilization and efficacy that continuous brings can have significant knock-on effects on manufacturers’ capital expenditures. When using traditional batch processing in a large stainless steel production bioreactor, as much time will be spent cleaning and on changeover as on production. With continuous, where manufacturing assets can be running 24/7, 365 days a year, manufacturers will quickly find their footprint needs are reduced. This means fewer large manufacturing sites and smaller workforce requirements which, coupled with reduced spend on consumables, will contribute to a significant reduction in capital expenditure.

The single biggest reason why these financial rewards haven’t been seized with both hands is the perception that continuous processing comes with significantly higher regulatory risk than batch processing.

There is some justification for this concern. It wasn’t until 2015 that we saw the first continuous process for a small-molecule drug product gain regulatory approval with Vertex’s Orkambi. And there are aspects of continuous processing – for example, the fact that unit operations run for significantly longer periods than in batch systems – that lead to concerns around bioburden management and process consistency, while the use of more complex instrumentation in continuous has led some to believe there will be a higher risk of equipment failure.

Of course, manufacturers and regulators must understand the differences between traditional batch processing and continuous manufacturing and be attune to possible risks. But the reality is there is no greater inherent risk in continuous than in batch processing, and the current regulations make no distinction between the two. This challenges the belief held by some that continuous, being a step-change from batch processing, will require an entirely new regulatory approach. In fact, there is no need for specific guidelines around continuous because these guidelines already exist in current regulation. 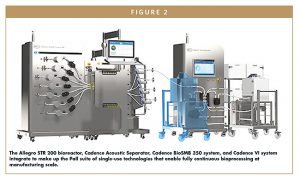 From a regulatory perspective, continuous systems actually present regulators with an opportunity, rather than a challenge. The sophisticated instrumentation of continuous systems will enable manufacturers to gather far more data than was possible with batch systems. This data will provide a better understanding of the process and enable regulatory bodies to confirm that operations are consistent and within acceptable ranges in a far more expedient and efficient way.

For the industry, it’s important not to see this as a one-way process. Biopharmaceutical companies have an important job to do in helping to educate regulatory inspectors and reviewers on the implementation of continuous bioprocessing. At Pall, we’ve spent a great deal of time engaging with regulators to get them comfortable with the manufacturing changes that are occurring and to provide as much information as possible about continuous; the rest of the industry needs to do the same.

One driving force behind the adoption of continuous in other sectors has been the rapid advance of technology, in particular their ability to harness the power of data. But while others have embraced AI, robotics, and data analytics technologies as a matter of course for many years now, the pharmaceutical laboratory has remained largely unchanged for decades. Only now is the industry genuinely talking about the “Lab of the Future” with real conviction.

This has hindered the sector’s move to continuous processes. As was the case with single-use components, pharmaceutical manufacturers want the reassurance of hard data and evidence of scalability before they make a change. But because adoption of cutting-edge technology had been slow, data on continuous exists on a very small scale, making it a challenge to demonstrate production-scale viability.

This cycle was very hard to break. Throughout the past 5 or 6 years, however, we’ve seen the industry taking a new approach to data. There is now greater emphasis on statistical methods and a commitment to make use of manufacturing data as a means by which to improve quality-by-design and quality risk management. This has paved the way for a shift to continuous, as the industry has gone down the path with batch processing and now feels more confident about mitigating risks in continuous bioprocessing.

From a technology perspective, it is critical that equipment and analytics work together to support real-time decision making and continue to build confidence in continuous. We made the decision at Pall to invest heavily in modelling to ensure all our continuous innovations are supported by robust data, particularly around scale-up. We believe this is one of the main reasons we’ve become the industry leader on continuous technologies and why more and more companies now approach us to develop an end-to-end continuous process for them – because the viability and value of the continuous approach is now irrefutable.

There also needs to be recognition from technology suppliers, Pall included, that greater collaboration and cooperation is needed. If manufacturers are to be able to integrate multiple continuous operations, they must be able to combine our technologies with other systems available in the market. For this, we need open communication and open data sharing – something our industry has historically been bad at, but which is vital if our customers are to realize the true potential of continuous.

Setting aside the financial and commercial advantages that continuous bioprocessing can bring to biopharma companies, it’s important to remember the ultimate beneficiary of this shift in the manufacturing status quo: the patient.

We see medicine shortages around the world, with healthcare systems perpetually challenged by the fact that we can’t bring new drugs to market fast enough to meet demand. Continuous bioprocessing can deliver a substantial reduction in the time it takes to deliver a product compared to traditional batch processing – vastly improving the speed at which biopharmaceutical companies can evaluate the viability of a new product, produce clinical trial material, and reach potential failure points will help tackle some of the world’s most pressing medicine shortages.

It also will enable biopharmaceutical companies to decentralize drug manufacture. Large, expensive, immobile plants can in time be replaced by smaller, more flexible continuous facilities, deployed in strategic locations with ready access to markets, where there is high demand. This will reduce the logistical burden and associated cost of transporting medicines around the world, but more importantly, it will enable us to move toward a true “drugs-on- demand” model, driving outcome-based medicine provision, where new medicines are manufactured nimbly, more consistently, and flexibly in locations closer to the patients who need them.

The industry is on a journey, and in truth, we are only at the beginning. Giant leaps have been made compared to where we were just 5 years ago, but it will take time for manufacturers, regulators, and the supply chain to fully commit to a continuous future. There is no doubt now, however, that the tide has turned, and things will only continue to pick up pace in the coming years. The simple truth is that the benefits for the industry and for patients are far too great to be ignored – in 5 years, we will look back and wonder why we didn’t do this sooner. 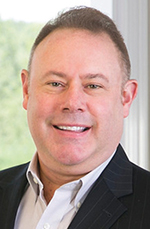 Dr. Martin Smith was appointed Pall Chief Technology Officer (CTO) in August 2014 and is responsible for the management of all central technology groups. In addition, his department provides Research and Product Development oversight, governance, and framework for the technology groups residing within Pall’s Business Units. Prior to his appointment, he led Pall Media (materials) R&D. Joining Pall in 2006, he has previously led R&D for Pall Medical. Dr. Martin spent a number of years at GE-Whatman, holding R&D and Business Development positions of increasing responsibility, ultimately attaining the senior technical position within the company. Prior to joining Pall, he was VP of Clinical Diagnostics at Intelligent MDx Inc. He has held several technical and product development positions at various diagnostics and laboratory supply companies in both the US and Europe. He earned his PhD in Biochemistry from University College London, UK, and is the holder of multiple US-granted patents in the area of separations science.