BIOAVAILABILITY ENHANCEMENT – Out of the Shadows: Excipients Take the Spotlight; Part 1 of 2


Both solid dose and liquid excipients are commonly used to improve the oral bioavailability of active pharmaceutical ingredients (APIs). In addition to enhancing the solubility of drug products, they can impact the consistency and control of drug bioavailability and serve other functions, including improved physiochemical stability and manufacturability. In May of 2012, BCC Research estimated that the global pharmaceutical excipients market was $4.9 billion in 2011 and will reach $6.7 billion by 2016. While excipients comprise less than 1% of the global pharmaceutical market, from the perspective of percentage of volume of a drug product they often dominate. So whereas excipients aren’t typically seen as “the main event,” they play an increasingly important role in getting API stars on stage. This latest installment in The Second Quadrant series was so informative it had to be partitioned into two parts, with this month’s focusing on the supporting actors on which most solubilization technologies – including melt extrusion, oral solutions, parenteral solutions, soft gel capsules, and spray drying – are critically dependent. 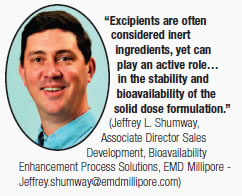 In an editorial in the April issue of World Pharma, Keith Horspool of Boehringer-Ingelheim, points out that a big issue impacting the pharmaceutical industry as a whole is that there just aren’t enough excipients. The reason? It’s becoming too costly due to the economic environment and the risk factors associated with the requisite FDA approval process. To overcome some aspects of the economic hurdles faced, the Vitic Excipient Database effort (https://www.lhasalimited.org/vitic_nexus/excipients/) has emerged in which leading pharmaceutical companies collaborate to share – anonymously – experimental data on different excipient formulations. The focus of this collaboration is around toxicity, but it could serve as a model for centralizing and sharing data with the goal of delivering cost advantages for solubilization. Perhaps this discussion will stimulate creative thinking around other and novel ways we can all cooperate to leverage insights and experiences related to excipients and insolubility.

To begin, we set out to learn from leading excipient manufacturing companies about their perspectives on the role excipients play in formulating and manufacturing drugs for improved bioavailability, what has and can be done differently, and how they see the industry and their specific part of the ecosystem evolving. We had such a positive response that we will focus part 1 on the role played and challenges faced by excipients and excipient provider companies in addressing solubilization. In July’s column for part 2, our contributors will review major contributions over the last lustrum, and share insights into what we can expect to see as we approach the next decade. Contributing companies are Ashland Inc. Specialty Ingredients (Dr. Vivian Bi), BASF (Dr. Shaukat Ali), Croda Inc. (Serge Kechichian), EMD Millipore (Jeffrey Shumway), and Shin-Etsu Chemical Co. (Sakaé Obara). 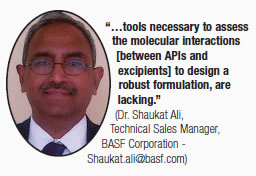 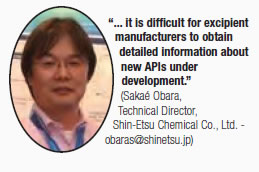 Q: What do you see as the top 3 challenges faced today in formulation to achieve enhanced bioavailability directly correlated with excipients?

Dr. Shaukat Ali: Poor solubility of APIs is due, in part to, to brick dust, high melting, and hydrophobic structures. Therefore, the ultimate formulation challenges arise from (1) finding suitable excipients with the desired safety and toxicological profiles, (2) identifying appropriate technologies or solutions requiring means for downstream processing and development, and (3) the complexity due to excipient and API interactions on the stability of formulation.

Dr. Vivian Bi: When employing enabling technologies for bioavailability enhancement, typically, excipients will be used at relatively high dose levels; the lack of clinical precedence at the targeted dose level very often becomes a major hurdle in choosing excipients that contribute improved solubility. An additional challenge is the high cost and risk of developing new pharmaceutical excipients that limit the opportunities for drug solubilization innovations. Finally, there are still limited excipient choices for the safe and effective intravenous delivery of poorly soluble compounds.

Serge Kechichian: One of the top challenges faced today involves the increasing trend toward low solubility drugs with a significant percent of the APIs in the pipeline falling in BCS classes II and IV. The formulation challenge is finding the right excipient to address these low solubility classes. Another challenge is the need for new novel excipients and/or excipient combinations in the industry, especially new surfactantbased excipients for the use in oral dosage forms. Finally, when new excipients are introduced, there are hurdles within the industry exposing the use of the excipient in final formulation as pharmaceutical companies avoid being first to the market with a new excipient. The cost to prove the effectiveness of a new excipient through the amount of necessary clinicals is quite expensive, and can be a deterrent to the creation of novel excipients to the market place. 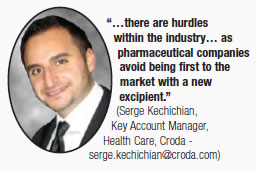 Sakaé Obara: Development of new excipients is becoming more challenging and expensive for excipient manufacturers due to regulatory issues, such as the high cost of toxicological studies. In addition, there are inherent hurdles faced when attempting to develop new technologies with better dissolution and simultaneously optimized for lower processing cost, increased stability, and an improved environmental profile. Finally, it is difficult for excipient manufacturers to obtain detailed information about new APIs under development.

Jeffrey Shumway: The top three challenges faced today in formulation to achieve enhanced bioavailability that directly correlate with excipients are Solubility, Permeability, and Targeted Delivery of APIs. Solubility and Permeability are becoming increasingly more important topics as market overviews indicate that Pre- Clinical pipeline therapeutics are dominated by Class II and IV APIs as classified by BCS. Targeted Therapeutic methodologies are also of interest due to improved efficacies related to targeted, rather than systemic deliveries. In all three challenges, excipients can play a functional role in enhancement of solubility and permeability and can also act as targeting agents.

Q: Are there opportunities that go unrealized or unexplored due to lack of understanding or lack of information about what excipients can deliver?

Dr. Shaukat Ali: Excipients play an important role in the formulation dosages. But these excipients are only few and far between for application in solid dispersions. A clear understanding of chemistry between APIs and excipients, structure function relationship, and/or tools necessary to assess the molecular interactions to design a robust formulation, are lacking. Nonetheless, the formulators with intuition stemming from the trials and errors approaches are able to overcome some of these challenges by identifying the appropriate excipients in the formulation development. Therefore, a clear understanding of the excipients’ attributes is necessary for a robust formulation.

Dr. Vivian Bi: There is no doubt that opportunities are overlooked, and in fact, such things happen probably more often than expected. For example, gamma-cyclodextrin is an effective solubilizer for many new APIs by forming inclusion complexes. With more high-molecular weight APIs emerging from the drug-discovery pipeline, gamma-cyclodextrin with a larger inner cavity could be a good solubilizer for many new APIs. Regardless of its proven safety, lack of familiarity with this excipient has resulted in its limited use in pharmaceutical applications. Therefore, it is important for formulators to work closely with their excipients supplier for advice and guidance. 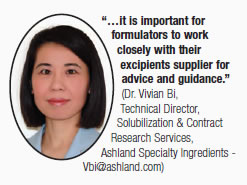 Sakaé Obara: Our excipients for solubilization enhancement have been used for coating applications for many years. Throughout this period, we have encountered several quality issues that had never been considered when dealing with coating. So we continue to evolve and enhance our offerings based on new information.

Jeffrey Shumway: One of the more often unexplored opportunities related to the impact of excipients on solid-dose formulations are considerations related to stability from two distinct perspectives. The primary consideration related to stability is the preservation of the active API and the prevention of chemical degradation. An additional and equally applicable consideration is preservation of the amorphous state of difficultly soluble APIs. Excipients are often considered inert ingredients, yet can play an active role, not in terms of the performance of the formulated API, but in the stability and bioavailability of the solid dose formulation. This excipient “functionality” is currently supported by a limited knowledge base and is simply in the primary stages of being explored; improved characterization, regulatory considerations, and process control and analytics may play a critical role in understanding effects related to stability. When considering the percent composition of many soliddose formulations, excipient content is generally >50%, and in some cases, excipient content approaches 90% of the formulated dose, which can have measurable implications on stability and bioavailability.

Q: Could excipient providers collaborate with each other or with other members of the pharmaceutical ecosystem to ensure the industry is better informed or more able to leverage the benefits solubilization excipients can offer?

Dr. Shaukat Ali: Mutual collaborations between the excipient manufacturers and drug manufacturers bear the hallmarks of many industries, namely BASF’s collaborations with companies specializing in solid dispersions and offering solutions to customers struggling to identify the appropriate technologies for increasing solubility and enhancing bioavailability of poorly soluble drugs. Like BASF, other companies are also forming alliances with CROs/CMOs and/or drug manufacturers to bring new chemical entities (NCEs) in drug development, manufacturing, and commercialization.

Dr. Vivian Bi: Such collaborations are ongoing and not limited to solubilization excipients. Frequently, these collaborations aim at influencing regulatory authorities to eliminate hurdles that may be preventing pharmaceutical scientists from accessing effective novel excipients.

Serge Kechichian: I believe there are opportunities in the industry for collaboration, but the value seems highest with the collaborations between excipient manufacturers and pharmaceutical/biotech companies. These collaborations provide more transparency and clarity with regard to the need of the formulator, resulting in novel excipient solutions that can be utilized and commercialized on a quicker time scale.

Sakaé Obara: Increased collaboration would be ideal; however, due to confidentiality of techniques and formulations, collaboration on the whole has not yet been well developed.

Jeffrey Shumway: As many solubilization-enhancing excipients are not new, and have gained regulatory acceptance by historic application, many collaborative opportunities exist to better define functionality from a material science perspective as to potential indication and application with pipeline therapeutics. In addition, increased regulatory pressures associated with Supply Chain transparency are encouraging all members of the pharmaceutical ecosystem to collaborate from a chainof- custody perspective. Development of improved or novel excipients may also provide grounds for collaboration by providing a unified approach to characterize and gain approval of emerging technologies.

To ensure The Second Quadrant serves as a forum for interactivity and collaboration, please send your reactions, thoughts, and suggestions so we can continue the dialogue. As always, I look forward to hearing from you, and together moving toward greater solubilization. 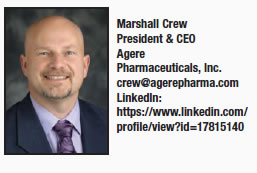