THE EVOLUTION OF IMMUNOTHERAPIES

The human body is armed with an efficient and elegant immune system that fights pathogens and tumor cells using T cells and antibodies made by B cells. Throughout the past century, incredible advances have transformed the way we think about harnessing the immune system’s potential to fight the most dreaded diseases.

Despite multiple immune mechanisms that can be employed to fight diseases, the majority of vaccines approved to date are thought to work principally through antibody responses created by B cells only. Experts agree that the future of successful vaccine development in infectious disease and in the fight against cancer is to go beyond the B cell – and engage the T cell arm of the immune system to more comprehensively employ the natural armament.

Attempts to date to create immunotherapies based on directing T cell responses have largely focused on engaging T cells to respond to known targets of B cell response – and have often failed. These failures suggest that the key to harnessing the entire adaptive immune system to fight disease is to identify the right T cell targets that will induce a protective response.

This leaves vaccines and immunotherapies at a critical crossroads – with a new technology poised to help us see what was previously hidden and fully deliver on their promise.

Unlike antibody targets, which are typically surface-expressed or secreted proteins, T cell targets can be derived from ANY protein in a pathogen or cancer, increasing the potential target pool by up to a thousand-fold. Human genetic diversity further increases the complexity. Here’s why. One of the first lines of defense in our body is white blood cells called antigen-presenting cells (APCs). The job of an APC is to sample its environment. For example, when a virus enters the body, a patrolling APC will “eat” it and break down all of the viral proteins into small pieces. The APC will then present some of the small pieces of the viral proteins on its surface to nearby T cells that are trained to differentiate “good” from “bad” pieces. Importantly, each person’s APCs have unique ways to chop and present protein pieces to their own T cells. If the T cells recognize the piece as “bad” then it will multiply, search for, and kill all cells harboring the virus.

This means that in every person, any piece of that virus has the potential to be recognized as foreign and constitute an antigen, but not all are. As a result, the sheer volume of potential antigens – a.k.a. T cell targets – in a complex pathogen or cancer and the differences in how they may be presented by each person’s APCs makes reliable predictions of which antigens to include in a vaccine virtually impossible. In addition, just because a T cell can “see” the target, it does not necessarily mean that a response to that antigen is protective. In fact, associations of T cell responses with clinical outcomes are required to prioritize T cell antigens effectively. The development of a tool that is able to cut through the complexity of human diversity and the magnitude of potential targets, in order to identify the right T cell antigens which drive a protective immune response, could unlock a wealth of treatments to better fight diseases for which no good solutions exist.

Genocea Biosciences is working to remove these barriers by finding clinically relevant antigens (those that elicit protective T cell responses) in diverse human subjects to guide the development of new immunotherapies. At the core of the company’s mission to commercialize key breakthroughs in vaccine and immunotherapy discovery and development is Genocea’s proprietary technology, ATLASTM, which solves many of the challenges associated with finding the right T cell targets. Using ATLAS, Genocea is cultivating a pipeline of immuno-oncology and infectious disease-related clinical and preclinical candidates.

ATLAS, a first of its kind, proprietary rapid antigen-screening system identifies, via a cellular assay, what the T cells of people who naturally protect themselves against disease do differently than the T cells of those who don’t. In order to detect the most important T cell responses, ATLAS is unbiased: rather than predicting which antigens are meaningful, it instead takes a panoramic snapshot of actual human T cell responses to any possible T cell target in a pathogen or cancer. By associating these individual T cell response signatures with differential clinical outcomes across large cohorts of patients, ATLAS can select the most clinically relevant T cell targets for vaccine and immunotherapy development. 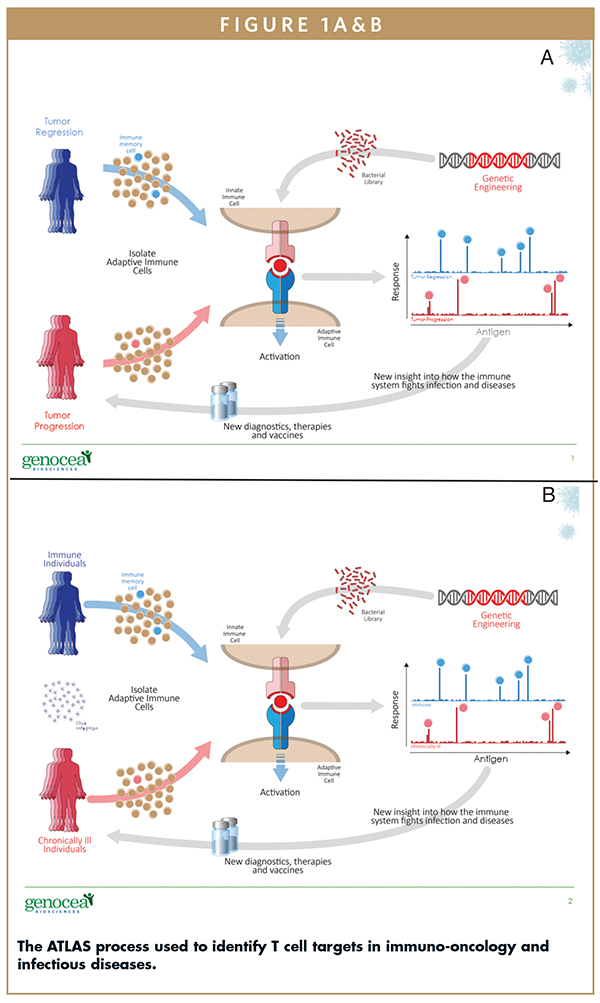 As a result, ATLAS winnows what can be as many as several thousand candidate antigens down to a small set of antigens that correlate with natural immunity. A subset is selected for in vivo testing with the goal of identifying antigens for formulation and development into vaccine candidates that will stimulate protective or therapeutic immunity across diverse populations.

Because antigens are identified by ATLAS using actual human immune responses to all potential targets, by the time these candidates reach clinical trials, there may be a greater likelihood of success in clinical development.

Genocea’s lead clinical candidate is GEN-003, a first-in-class immunotherapy to treat genital herpes by inducing both T cell and B cell (antibody) immune responses. GEN-003 has demonstrated first-in-class results to date by showing statistically significant reductions in clinical signs of genital herpes and viral shedding. The antigens included in the GEN-003 vaccine were discovered using ATLAS.1

Genital herpes is a serious and incurable sexually transmitted disease that affects more than 500 million people worldwide,2 including one out of six people between the ages of 14 to 49 in the United States.3 The disease can cause painful symptoms that include “outbreaks” in the form of blisters, usually on or around the genitals and anus. People with genital herpes can still be highly infectious even if they are not experiencing noticeable symptoms, and more than 80% of infected individuals ages 14 to 49 in the United States go undiagnosed.4 While available antiviral treatments can help prevent and shorten genital herpes outbreaks,5 there is a significant unmet need for therapeutic approaches that better control symptoms and viral shedding (the active viral state when transmission risk is greatest).

In October 2015, Genocea reported positive results from its Phase 2 trial of GEN-003 6 months post dosing. Vaccination with GEN-003 resulted in a statistically significant 58% reduction from baseline in the viral shedding rate, the primary endpoint of the study. The proportion of patients receiving GEN-003 who were lesion-free at 6 months after dosing ranged from approximately 30% to 50%, similar to results reported in clinical trials with chronic administration of oral antiviral therapies. The study also found that GEN-003 was safe and well tolerated by patients, with no serious adverse events related to the vaccine.

GEN-003 most recently demonstrated sustained and statistically significant reductions compared to baseline in the rate of viral shedding 12 months after dosing, with sustained efficacy at multiple dose levels across secondary endpoints measuring the impact on clinical disease. The company has advanced the two most promising doses, of 60 μg per protein combined with either 50 or 75 μg of Matrix-M2TM adjuvant, from this Phase 2 dose optimization study into an ongoing Phase 3 efficacy trial. Later this year, the company will report virologic and clinical efficacy data using potential Phase 3 endpoints from the Phase 2B trial, confirming the activity of GEN-003 manufactured at larger scale. Genocea will also commence a Phase 2B antiviral combination study in the second half of 2016.

GEN-003 has the potential to become a cornerstone treatment for genital herpes patients. A single course of GEN-003 may offer genital herpes patients efficacy similar to a full year of daily administration of oral antivirals – but with vastly improved convenience. Furthermore, in contrast to the dominant treatment paradigm of episodic antiviral treatment, GEN-003’s ability to reduce viral shedding could decrease the frequency of genital lesion outbreaks and may potentially lower the risk of disease transmission for these patients.

ATLAS’ capabilities are currently also being leveraged to help take the guesswork out of cancer vaccine T cell target discovery and better identify patients most likely to respond to immuno-oncology therapies through partnerships with the Dana-Farber Cancer Institute and Memorial Sloan Kettering Cancer Center.

In the Memorial Sloan Kettering Cancer Center collaboration, Genocea is using ATLAS to screen the T cell responses of melanoma and non-small cell lung cancer patients treated with checkpoint inhibitors against their own, patient-specific tumor neoantigens. This research is aimed at identifying signatures of protective T cell responses with the goal of potentially discovering new cancer vaccine T cell antigens.

The research conducted by Genocea alongside these leading academic centers demonstrates ATLAS’ flexibility to help optimize the development of both universal and personalized cancer vaccines. When applied across large diverse populations against common tumor-associated antigens, ATLAS may discover better targets to include in cancer vaccines, which could potentially help them work more broadly across different patient populations. When applied to an individual’s response to their own cancer neoantigens, ATLAS may enable better personalized cancer vaccines, either as standalone therapies or in combination with other immunotherapies, such as checkpoint inhibitors.

With additional data from its ongoing immuno-oncology collaborations expected in 2016, Genocea anticipates initiating trials for a personalized cancer vaccine candidate in 2017.

Based on the information and insights gleaned from ATLAS, Genocea has been able to successfully define targets of human T cell responses that become central to novel vaccines and immunotherapies, and demonstrate success in a clinical setting. Effective therapies which direct T cells against cancer and infectious diseases could revolutionize healthcare and improve outcomes for patients affected by these illnesses. The right T cell targets, discovered with ATLAS, are the key to unlocking the full promise of T cell therapies, finding solutions for the most challenging and hardest to treat diseases. 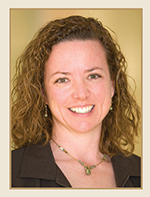 Dr. Jessica Baker Flechtner joined Genocea in 2007, soon after the company was founded, and currently serves as the Chief Scientific Officer. Dr. Flechtner is a pioneer in the development of novel vaccines directed toward T cell immunity and has more than 18 years of experience in immunology, infectious disease, cancer, and vaccine development. She leads Genocea’s efforts to develop T cell-directed vaccines and immunotherapies against infectious diseases and other indications. Prior to joining Genocea, Dr. Flechtner developed vaccines and immunotherapies for cancer, infectious disease, autoimmunity, and allergy in several companies, including Mojave Therapeutics and Antigenics Inc. (now Agenus). She is an inventor on seven pending and three issued patents and has multiple peer-reviewed scientific publications. Dr. Flechtner performed her post-doctoral work at the Dana-Farber Cancer Institute and Harvard Medical School. She earned her PhD in Cellular Immunology and her BS in Animal Science from Cornell University, and is a member of the American Association of Immunologists and American Society for Microbiology.