The presence of the hormone progesterone in the female body makes a vital contribution to the success rate of pregnancy. Progesterone plays a role throughout pregnancy, increasing the likelihood of conception, preparing the uterus for implantation, and aiding development of the fetus. It is becoming more an more common for mothers experiencing difficulty with natural conception to turn to In Vitro Fertilization (IVF), with about 1% of all the babies born in the US in recent years conceived as a result of IVF treatment. According to CDC’s 2010 ART (Assisted Reproductive Technology) Success Rates, 147,260 ART cycles were performed at 443 reporting clinics in the US during 2010, resulting in 47,090 live births (deliveries of one or more living infants) and 61,564 infants. These numbers are set to increase as the procedures become cheaper and more common.

Women undergoing IVF are commonly given a Follicle Stimulating Hormone (FSH), which stimulates the ovaries to produce mature eggs for external fertilization. A known side effect of FSH treatment is a drop in progesterone production which, coupled with some women choosing to conceive later and later in their lives, can lead to a distinct lack of progesterone in their systems. As such, luteal support (the administration of progesterone) is a significant omponent of the IVF process. There are a variety of techniques for IVF, but in all cases, achieving an adequate level of progesterone is known to improve the likelihood of a successful pregnancy. The period of luteal support varies depending on each patient’s natural level of progesterone, some requiring support for the first trimester, others for the full term of their pregnancy.

Typically, the patient is relied on to self-administer progesterone either by vaginal pessary (eg, Endometrin, twice daily) or intramuscular injection of Progesterone in Oil (PiO, once daily) for the specified duration of lutea support. While neither method has been proven to be more efficacious than the other, the requirement of pessary administration for patients to be horizontal for up to 20 minutes while administering the dose, the potential for inaccurate dosage due to subsequent leakage and the associated discomfort of the delivery method represent inconveniences that can sway favor toward the injectionbased administration. Ignoring the negative aspects of injection, it is plausible to recognize it as a superior method of drug delivery in terms of convenience and efficacy. It is our belief at Cambridge Consultants that, by addressing the stigma and usability issues of self-administered injections, it is possible to make them the more attractive method for the administration of drugs in this and other scenarios. 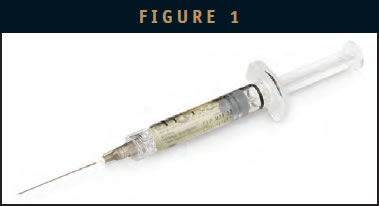 The recommended injection site for PiO is the ‘upper buttock’ region, which is particularly challenging for those choosing to self-administer. Being suspended in sesame oil, PiO has a relatively high level of viscosity when compared with saline and typical injectable drugs. For manual syringe-based administration, a user would have to exert up to 10 N for up to 120 seconds in a typical usage scenario for a 2- ml administration. The effort required to maintain this force for delivery in addition to the awkward injection site can lead to user hesitation, painful angular variation of the needle in the skin, and intermittent delivery, which prolongs the injection process. Additional issues with this delivery method can manifest as injection site irritation due to the long injection duration, discomfort due to the volume of relatively cold oil injected, and its tendency to clump into an assortment of small beads as it dissipates.

Cambridge Consultants was first made aware of PiO and the associated usability issues while conducting user studies with healthcare professionals at US fertility clinics in 2011. Improving the user experience of PiO represented a challenging and exciting opportunity for Cambridge Consultants to showcase its in-house capabilities in the field of innovative medical device design, product design, electronics design, industrial design, and human factors research. The drug delivery device development team set about producing a reusable device design specifically tailored to the delivery of PiO from a standard 2-ml syringe with luerlocked needle, this device was eventually to be known as ‘piOna.’ Utilization of the existing syringe presentation and delivery vessel is important, as it maintains consistency for users who may or may not choose to inject with the aid of a delivery device and for the pharma company who will most likely not want to bear the additional costs of certification for a new or modified syringe presentation of the hormone. A glass 2-ml syringe with luer-lock needle is seen as the ‘worst case scenario’ for engineers designing an auto-injector, it’s large, difficult to safely retain in the device, and prone to relatively poorly controlled dimensional variation. Our philosophy was to design a device around the worst case parameters to demonstrate that any syringe can be catered for in a reusable auto-injector. 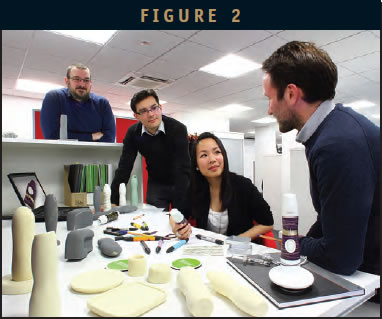 Utilizing in-house capabilities in Industrial Design and Human Factors, multiple geometries for the exterior of the device were explored and exposed to limited user studies for feedback. With the overall size of the device limited by the size of the syringe and minimum grip size for the target demographic, a variety of conceptual forms were modelled in foam to determine the most preferred handling geometry to suit the awkward delivery site. By analyzing the feedback of potential users exposed to the assorted handling models, it was possible to determine not just the optimum shape of the device for the application, but also the preferred locations for electromechanical controls and tactile feedback features. In addition to the physical form of the device, much attention was paid to determining a visual style for the device that would hold maximum appeal to the typical user. The intention was to break the cycle of drug delivery devices being immediately recognizable as medical devices. The approach we take to device design is two-fold. First, we determine and specify the functional requirements for a device and ensure they are satisfied, if not exceeded. Second, we strive to ensure the device is appealing to the user; it doesn’t matter how well a device works if no one wants to use it! 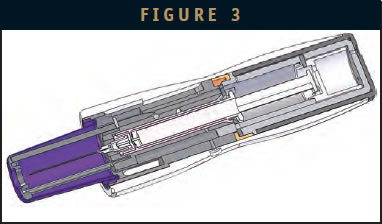 Needle phobia is a real deterrent to a significant number of potential recipients of self-administered injectable drugs. In the case of PiO, a typical needle is 22 gauge and 1.5 inches long to cater for the high viscosity of the sesame oil suspended hormone and deep intramuscular delivery. The development team addressed this issue by hiding the needle from the user until the final disposal step of the usage sequence. The needle is capped until the device is assembled, primed, and ready to use, at which point the end of the cap protruding from the needle sheath can be pulled out to remove the cap whilst the needle is hidden from view. 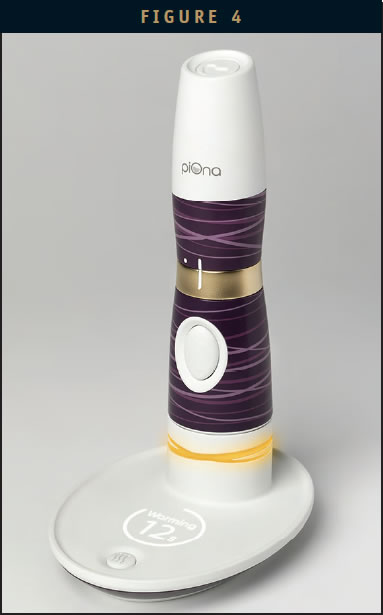 To combat the long injection duration, the development team took advantage of the in-house electronics know-how of Cambridge Consultants to develop a novel system for prewarming the syringe and its contents prior to delivery. While docked, the piOna device is connected to a power supply, and inside the device, a custom-made PCB coupled to a flexible heating element warms the syringe from ambient to body temperature in approximately 30 seconds. The temperature is then monitored and maintained at precisely 38°C by the onboard electronics for as long as the device is docked. By only being powered in the docked state, the device is not classified as an electronic auto-injector and manages to avoid the additional regulatory burden of such a device. Once undocked, the presence of a layer of foam inside the device insulates the syringe and prevents the temperature dropping significantl over the course of the injection. In-house testing has indicated that warming PiO from 21°C to 38°C represents a 30% reduction in viscosity of the oil, and subsequently a 30% reduction of injection duration. Additional potential benefits of warming the PiO are a reduction of injection site irritation, faster dissipation of the PiO into the muscle, and the associated reduction of patient discomfort.

To combat the potential for user apprehension of the new level of technology that has been incorporated into the device, visual and audible progress indications can be integrated into the docking station to reassure the user at every step of the process, from preparation to disposal.

Adding the functionality to automatically insert the 1.5- inch needle would have significantly increased the size and cost of the device, so the development team opted to fix the needle and syringe relative to the device and utilize the novel soft touch needle shield to replicate the insertion technique of a healthcare professional. Typical advice for the insertion of a needle into the skin is to utilize a ‘swift dart-like motion’ at 90° to the skin. This technique is replicated in piOna by forcing users to overcome a high initial resistance to retract the needle shield as they push it against their skin. Once this initial force is achieved after a few millimeters of movement, the force to retract the needle sheath significantly reduces, creating the required ‘dart-like’ motion. Orientation of the device relative to the skin is aided by the wide flat front of the needle shield.

A safety interlock button is included in the device to prevent accidental triggering, the intention being that it is held down only at the beginning of insertion/delivery and can be released once delivery begins. At approximately 90% needle shield retraction, the delivery mechanism is mechanically triggered, and the contents of the syringe are expelled automatically. The button also serves as an intuitive guide as to what the development team has determined to be the optimum handling orientation for the device. Holding the device such that the thumb is over the interlock button automatically positions the fingers over the tactile feedback pip, a small mechanical protrusion that emerges to signify a completed delivery. 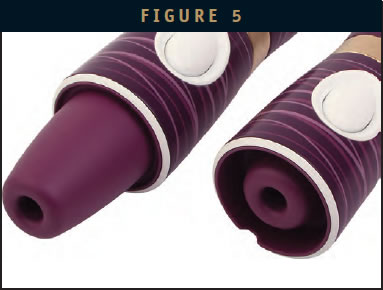 Our own user studies have shown that feedback is an important feature of any drug delivery device. Through piOna, Cambridge Consultants is hoping to demonstrate the future potential of the type of user feedback to expect from drug delivery devices. At the most basic level, there is mechanically driven tactile and audible feedback, representing the bare minimum level of feedback already seen in today’s devices. The PCB on board piOna can easily be expanded to provide never before seen levels of user feedback in a drug delivery device, visual progress displays on the docking station as you inject can be implemented through wireless technology pioneered at Cambridge Consultants. Taking the technology further, integrating such a device into a network of connected health devices or even teaching it to talk to a smartphone is now well within reach.

The piOna device was conceived to not just showcase the diverse technical abilities of Cambridge Consultants, but to push the limits of expectation for existing and potential clients in terms of device performance, capability, comfort, and appeal. Typical gestation for a commercial drug delivery device development is 5 to 10 years, a timeframe that promotes a risk-adverse strategy when considering future trends. Cambridge Consultants is suggesting that drug delivery devices do not need to exist in a style space that sits outside of future trends and is inviting its clients to take the opportunity to define them.

You won’t see piOna on a shelf to buy; it exists purely as a catalyst for innovative product design. We hope that piOna can help our current and future clients see the potential for their own devices and allow us to design them an equally unique solution tailored to their specific requirements. 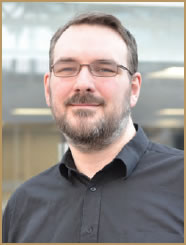 George Perkins is a Senior Mechanical Engineer in the Medical Technology division of Cambridge Consultants, a product development firm headquartered in the UK and with offices in Cambridge, MA, and Singapore. Mr. Perkins has been working in a consultancy environment for 17 years, directly involved in the design and development of medical devices for 5 years, including auto-injectors, dry powder inhalers, electro-mechanical delivery systems, and surgical implants. 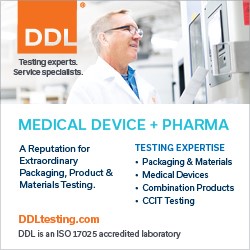 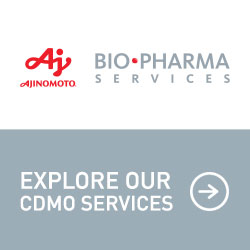