After more than a decade of evaluation in medical devices, nanoparticle-reinforced polymers are increasingly being sought out for tailoring performance characteristics of vascular catheter shafts.1 Reinforcing nanoparticles affect the polymer at the molecular level to improve transmission performance properties (ie, pushability and torque) for advancing these devices into more distal regions of the body, without affecting surface smoothness, flexibility, or radiopacity of the shaft.

Neurological microcatheters with diameters less than 0.03 inches (0.7 mm) are able to reach regions of the brain from a femoral artery access. These devices create new paradigms for diagnostics, surgical procedures, and local drug delivery. Traditional polymers used for construction of shorter shafts with larger diameters are not always suitable for such devices.

Despite smaller diameters, thinner wall sections, and longer shafts used for advanced microcatheters, the properties required to advance and navigate the catheter to the distal site remain. Pushability without buckling, flexibility without kinking, and responsiveness of the distal end to applied torque at the proximal end for navigation (ie, torque transmission) are desirable characteristics of catheter shafts. 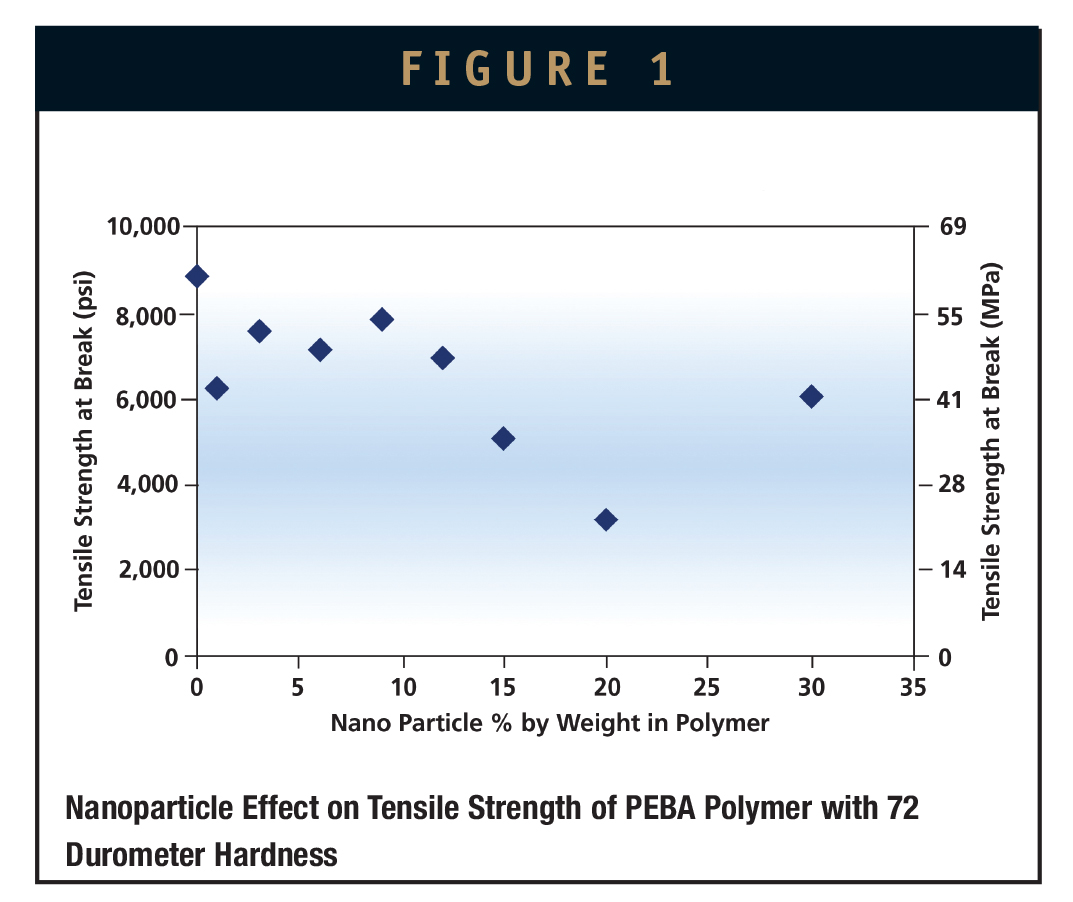 Two common characteristics of catheter shaft performance include pushability and flexibility. Pushability refers to the forward force applied by a physician to advance the catheter toward the designated therapeutic site, against which resistance is encountered from movement through non-linear vascular pathways.

The section of catheter between the physician’s hand (proximal end) and the patient’s vascular access may be theoretically assessed as an engineering column. Thus, column buckling equations may be used because the physician must be able to apply sufficient pressure to overcome vascular resistance on the leading portion inside the body (distal end), without the portion outside the body collapsing. Because the vascular pathway is non-linear, the catheter must remain flexible enough to navigate the bends without causing trauma to the patient or undue friction during insertion. Flexibility can be predicted by rigidity equations of the tube.

A desirable catheter shaft may include one with sufficient buckling strength to fully insert the catheter into the therapeutic site, while having the least amount of rigidity to navigate the desired vascular pathways without causing trauma to the patient.

The common material characteristic used in predicting buckling and rigidity is elastic modulus. For a shaft with a uniform cross-section along the length, a material with a high elastic modulus will have a greater resistance to column buckling under load, and will therefore improve pushability, yet increase rigidity of the shaft for navigation. Selection of a material with the precise elastic modulus is necessary to provide the ideal balance between pushability and flexibility for a given shaft construction.

Polymers are key building blocks in catheters. Polyamides, polyether block amides (PEBA), and thermoplastic polyurethanes (TPU) are preferred for most applications due to their biocompatibility and mechanical properties. Within these classes are a number of polymer types, grades, and suppliers that provide a range of performance properties, including elastic moduli. However, gaps remain in the availability of precise properties. Enhancing the elastic modulus of polymers for non-medical applications is often achieved by adding glass, carbon, and other fibrous materials to the polymer. These fillers are far too large in size for the extrusion of extremely thin wall catheters with smooth surfaces.

Reducing fiber lengths of these traditional fillers to accommodate thin sections has had limited success. The critical factor in the success of polymer reinforcement is the aspect ratio (or length-to-thickness ratio). Additives with aspect ratios of less than 20:1 do not generally provide meaningful strength enhancements to be considered reinforcing agents. Thus, reduction in traditional fiber size through length reduction alone is insufficient.

When reinforcing agents are reduced substantially in both length and diameter, there is often an agglomeration between the small particles, and thus difficulty dispersing the filler in the polymer melts. Poor dispersion of the reinforcement can create unpredictable and often deficient performance in the finished part.

Nanoclays are minerals that have high aspect ratios and with at least one dimension of the particle in the nanometer range. Reinforcements in the nanometer size range closely approach the molecular size of the polymer. This makes for a very intimate encounter between the two materials. When properly modified, the filler particles and polymer interact to create very constrained regions at the particle surface. This immobilizes a portion of the polymer chain creating a reinforcement effect.

Two characteristics of nanoclay particles that are critical to their success as polymer-reinforcing agents are purity and cation exchange capacity. Purity is important in achieving maximum increases in mechanical properties. Impurities act as stress concentrators, resulting in poor impact and tensile properties. Cation exchange capacity provides the surface activity necessary for acceptance of surface treatments to the clay. This treatment is essential to allow the small particles to be effectively accepted and dispersed in the polymer matrix. 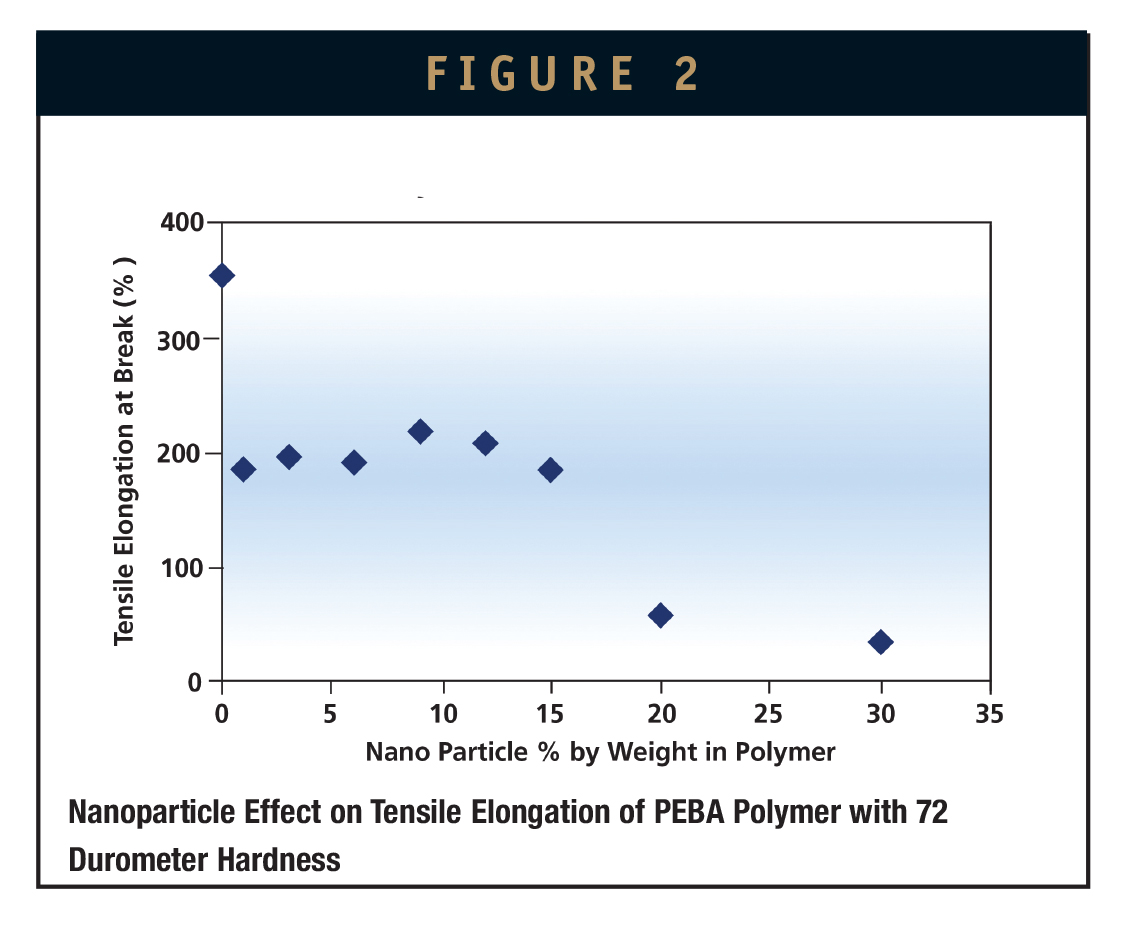 Montmorillonite clays have had the widest acceptability for use in polymers. These are smectite clays that can absorb water and have a layered structure of aluminum octahedron sandwiched between two layers of silicon tetrahedron. Each layered sheet is slightly less than 1 nanometer or 10 angstroms thin with surface dimensions extending to about 1 micron or 1000 nanometers. This results in a surface area is in the range of 750 square meters per gram (228,717 sq ft/oz) of clay.

Because montmorillonite clay is hydrophilic, it is not inherently compatible with most polymers and must be chemically modified to make its surface more hydrophobic. The most widely used surface treatments are ammonium cations, which can be exchanged forexisting cations already on the surface of the clay.2 The treatments work on the clay to minimize the attractive forces between the agglomerated platelets.

This process of separating the nanoclay platelets is referred to as the intercalation process. Without this separation, the nanoclay is not capable of allowing the polymer to penetrate between the platelet layers.

In the exfoliated form, nanofillers have a flexible platelet type structure that is very small. The thickness of the platelet is in the nanometer range, while the length and width are in the tenth to 2-micron size. Because of this, it can be said that a single gram of exfoliated nanoclay will contain over a million individual particles. 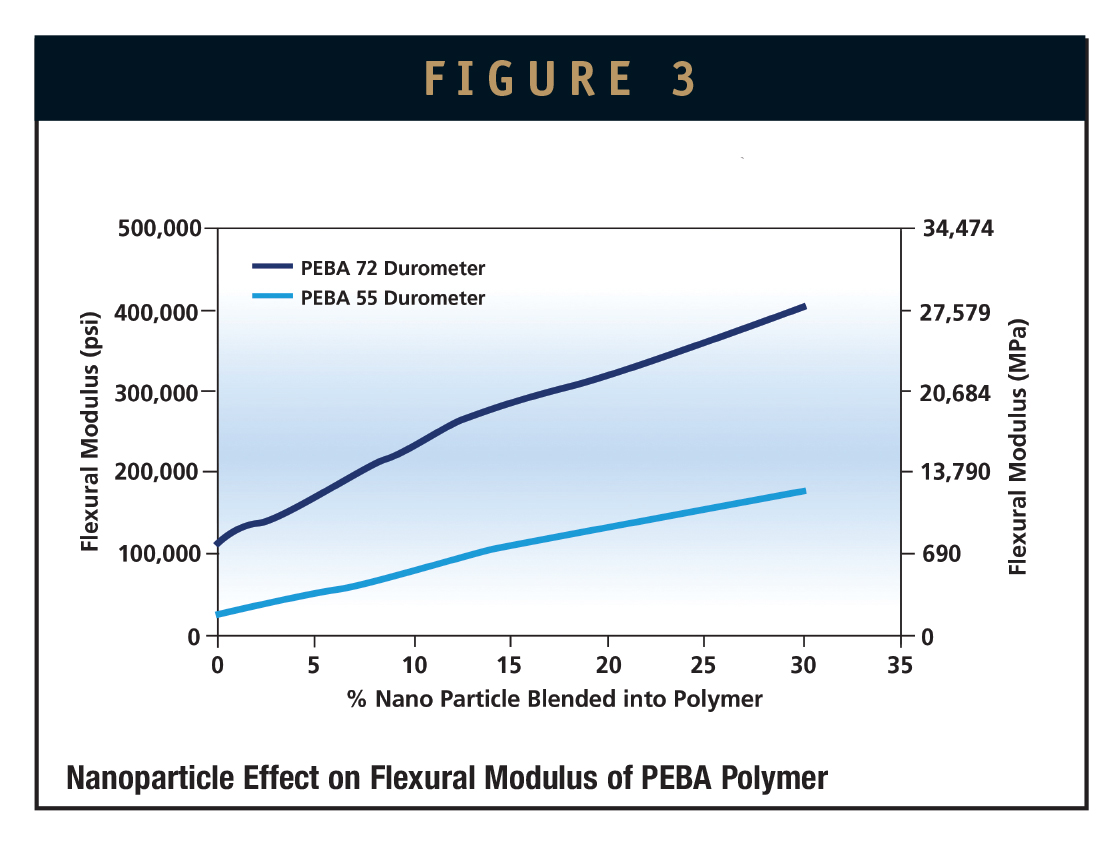 Nanoclays are melt-compounded into polymers using twin screw extrusion technology. The compounding parameters and mixing screw profile are important variables in combination with the pretreatment of the clay itself.3 Because the clay is an aggregate of thousands of individual platelets, it is critical that the individual platelets be separated prior to compounding. If the platelets are not separated, it is unlikely that the shear forces generated during the compounding process will be great enough to overcome the forces holding the aggregates together. Hence, less-than-optimum exfoliation or dispersion will result.

Application of the right clay treatment is required to allow for intercalation and making the intercalate compatible with the host polymer so properties are enhanced without the sacrifice of other properties. This is what allows for improvement in the strength without making the polymer brittle. Secondly, melt-compounding must occur such that the prepared clays get maximum dispersion without degrading the polymer. 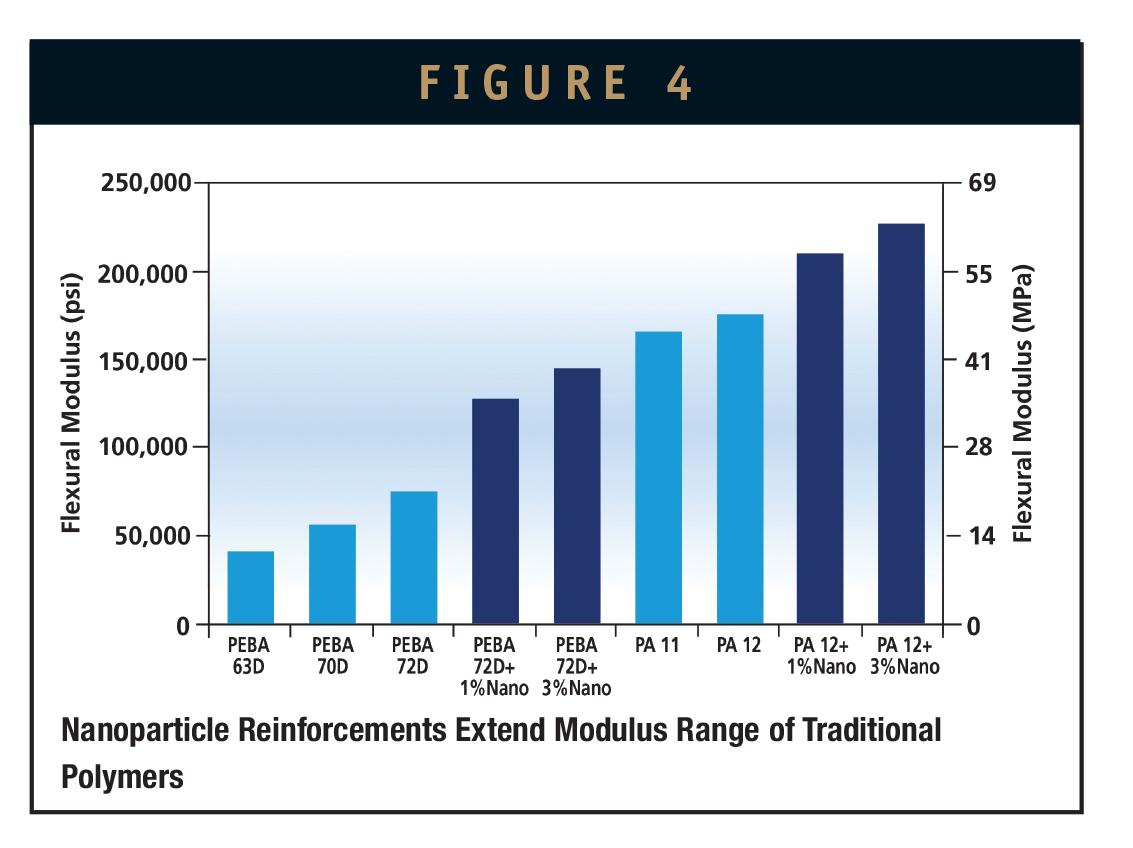 Polyamide 11 and 12 polymers, and PEBA copolymers are commonly used to manufacture vascular catheters, and have become the materials of choice for percutaneous transluminal coronary angioplasty (PTCA) applications that include balloon and stent delivery catheters.4 These materials have proven to be sufficiently flexible to minimize trauma while navigating the vascular pathways, yet rigid enough for pushability and torque transmission to reach the desired site.

PEBA copolymers are considered thermoplastic elastomers based on polyamide 11 and 12 chemistry. These materials offer lower hardness and rigidity than polyamides, yet typically more rigidity than many thermoplastic urethanes. By varying the copolymer constituents, suppliers of PEBA are able to provide a range of grades with varying rigidity and hardness. Nanoclay particles can be added to these polymers to further tailor rigidity for specific catheter applications.

Nanoclay particles added to polymers commonly used in catheters primarily affect flexural properties. Often, other mechanical properties, such as tensile strength and elongation, remain relatively unaffected. As shown in Figure 1, tensile strength of a PEBA with a Shore Hardness of 72D is relatively unaffected in compounds with up to 12% by weight of nanoparticle reinforcements in the formulation.

Tensile elongation at break also remains high for the same polymer, after an initial drop that may be attributed to either the addition of any additive or the addition of heat and shear from extrusion compounding (Figure 2).

The mechanical property most affected by the addition of nanoparticles is flexural modulus (Figure 3). This property is directly related to rigidity of the shaft and therefore of primary consideration.

Thus, in low-to-moderate loadings, nanoparticles can improve flexural modulus of catheter polymers while maintaining relatively high levels of tensile properties. This provides the ability to tailor pushability and flexibility for a desired catheter application.

This tailoring is most useful in bridging gaps in the available flexural moduli from unmodified polymers.5 The most rigid, commercially available PEBA polymer has a 72 Shore D Hardness (72D) and flexural modulus of 74,400 psi (513 MPa). When greater stiffness is required, many design engineers consider polyamide 11 with a flexural modulus of 165,300 psi (1,140 MPa), more than twice that of 72D PEBA. Low concentrations of nanoparticles melt blended into the 72D PEBA can bridge the gap in rididity between these two materials for tailoring pushability and flexibility of catheter shafts. Nanoparticles can also extend the flexural modulus properties of polyamides (Figure 4).

Twin screw extrusion offers excellent dispersion of nano-size particles in polymers used for catheter shafts. This results in custom polymer blends with appearance, processing, and performance properties not dissimilar to unmodified polymers. For designers of minimally invasive devices, such as diagnostic, interventional, and drug delivery catheters, this provides a much broader portfolio of materials for tailoring device performance as compared to working only with commercially available, unmodified polymers. This increased availability of medical materials could create a new wave in the development of precision devices to reach smaller areas deeper within the body. 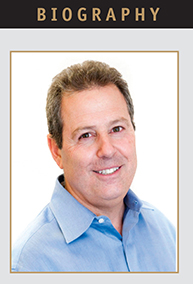