Implantable drug-eluting devices (also referred to as implantable drug delivery systems) offer several unique advantages over conventional oral or parenteral drug delivery methods. For instance, they can provide localized, site-specific drug delivery, which is especially important in applications such as cardiology and oncology, where targeted delivery can improve the effectiveness of treatment and minimize side effects or damage to healthy tissue.1-3 The dosage requirements often are lower than alternatives, further reducing the potential for side effects.1 Also, drug-eluting devices can improve patient compliance, one of the greatest challenges in healthcare, as about 50% of conventional medications are not used as prescribed.4 The treatment regimen can be simpler because it requires fewer doctor visits and dosages than traditional therapies.1

In women’s health, for instance, transmucosal hormone contraceptives delivering progestin and/or estrogen have been developed into combination products made from silicone, EVA, and TPU. A commercial example is Pfizer’s Estring® silicone intravaginal ring (IVR) that releases 2 mg of estradiol for 90 days to treat symptoms associated with menopause.23 Another example is Merck & Co.’s NuvaRing® IVR produced from EVA that delivers 120 micrograms of etonogestrel and 15 micrograms of ethinyl estradiol per day on average for 3 weeks.6 The NuvaRing IVR was prescribed 5.2 million times in 2012 and generated over $720 million in sales revenue in 2014.25,26

Merck also developed Nexplanon® (a new version of Implanon®). The Nexplanon drug-eluting device is made from EVA and delivers 68 mg of etonogestrel for up to 3 years.27 Unlike the NuvaRing, Nexplanon is a rod implanted subcutaneously in the arm.

Subcutaneous contraceptive implants date back to 1966 when the non-profit organization Population Council developed the Norplant.28 Launched in 1983 by Wyeth Pharmaceuticals, the original Norplant was a 5-year non-biodegradable drug-eluting device designed with six silicone capsules each loaded with 36 mg of levonorgestrel. A modern version of the Norplant, Jadelle®, currently is marketed by Bayer Pharmaceuticals.28,29 Several innovative contraceptive and antiviral technologies are under development:

-CONRAD, a non-profit organization, is developing multipurpose prevention technologies with polyurethanes that combine contraceptive and microbicidal attributes into a single IVR device.7 The University of Utah pioneered the development of CONRAD’s IVR with the antiretroviral drug tenofovir and contraceptive levonorgestrol.19,20

-The Oak Crest Institute of Science is developing an antiviral drug-eluting device with PVA-coated silicone to deliver tenofovir alafenamide subcutaneously for HIV/AIDS prevention and treatment.30

-The University of Manitoba is developing a polyurethane IVR for sustained delivery hydroxychloroquine to prevent male-to-female HIV transmission.31

-J3 Bioscience, Inc. (formerly ViroPan) is developing an intravaginal ring with a glycerin formulation to relieve the symptoms of vaginal dryness and aims to provide relief for up to seven days without the use of drugs or hormones.32 The company has completed a pilot human trial and now is preparing for the pivotal study. 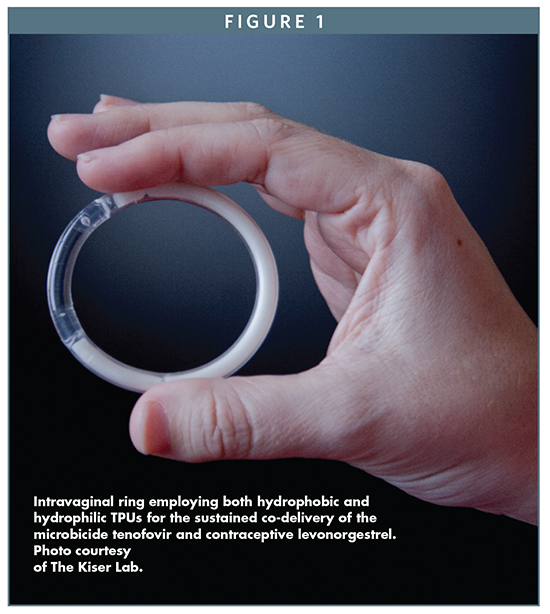 Oncology
Drug-eluting devices have been developed for the treatment of, among others, brain tumors, prostate cancer, and bladder cancer.15,44,45 Endo Pharmaceutical’s VantasTM, for example, is a hydrogel depot that delivers 50 mg of histrelin acetate subcutaneously for 12-month relief of prostate cancer symptoms.45 TARIS Biomedical developed a non-biodegradable drug-eluting device to treat non-muscle invasive bladder cancer (NMIBC).44 TARIS Biomedical’s technology is a small flexible pretzel-shaped system that delivers drugs for several weeks through an osmotic pump made of silicone and nickel alloy wire.46 Alternative therapies for NMIBC can cause systemic side effects and are only held in the bladder for a short period of time.44 However, drug-eluting devices implanted in the bladder offer targeted delivery of APIs for a longer period of time in comparison to traditional methods, which may improve symptom relief for patients suffering from NMIBC.

Pain Treatment
Conventional solutions for pain, such as oral and parenteral medications, often are dangerously addictive and extremely expensive. From 1999-2010, the CDC reported a 400% increase in deaths from prescription pain drug overdoses among women and a 265% increase in men.47 In order to address these issues, TARIS Biomedical and Axxia Pharmaceuticals are developing non-biodegradable drug-eluting devices for chronic pain.44.48

Axxia developed a subcutaneous drug-eluting device to deliver hydromorphine continuously for 30 to 90 days with zero-order kinetics to treat chronic pain associated with cancer or HIV/AIDS induced neuropathy.48 TARIS Biomedical’s LiRIS® program delivers lidocaine for a prolonged period of time directly to the bladder of patients suffering from interstitial cystitis/bladder pain syndrome (IC/BPS).49 In 2014, Allergan acquired the LiRIS program for almost $600 million.49 Also, Medtronic’s implantable Synchromed® Infusion Pump System delivered baclofen for muscle spasticity and was made from silicone and titanium.12 The Synchromed system generated an estimated $320 million in sales annually, but was recalled in 2015 due to manufacturing compliance issues and patient safety concerns.50 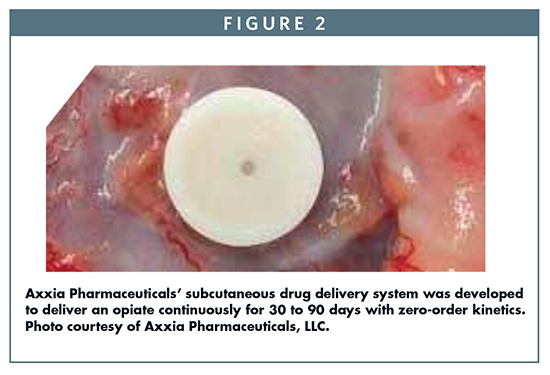 CNS Health
Endo Pharmaceuticals’ MedLaunch Implant Program developed a subcutaneous drug-eluting device to deliver risperidone, and similar to Titan’s Probuphine, this technology will be commercialized by Braeburn.10,53 Nearly 50% of patients being treated for schizophrenia are non-compliant.54 Non-biodegradable drug-eluting devices that can deliver antipsychotics at a controlled rate for a prolonged period of time (eg, 60 to 90 days) may provide substantial therapeutic benefit for patients. 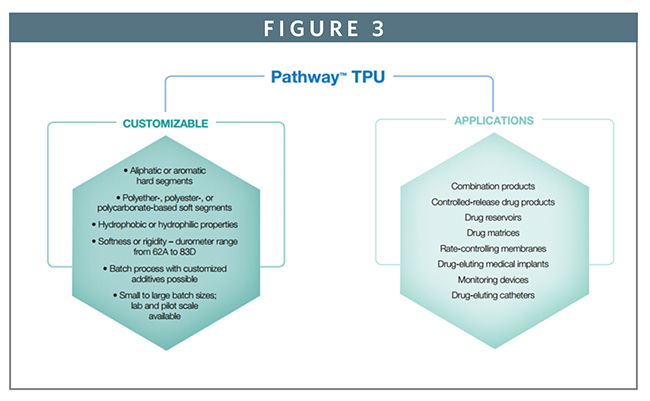 Lubrizol LifeSciences partners with pharmaceutical companies from ideation to commercialization. Lubrizol’s non-biodegradable Pathway TPU excipients can be tailored to suit a wide range of drug delivery applications and can be processed into a variety of shapes (eg, rods, tubes, films, and a variety of matrix-type designs) via methods such as hot-melt extrusion, injection molding, and solvent casting. Ethylene oxide, hydrogen peroxide, E-beam radiation, and gamma radiation are acceptable methods of sterilization.

Thermoplastic polyurethanes have exceptional safety records with over 30 years of use in medical devices, such as catheters and pacemakers.58 The unique ability to customize TPU properties allows for the development of advanced drug delivery systems.

Therapy for Severe Spasticity. Available at:

37. Intarcia Therapeutics, Inc. Announces Completion of Enrollment of ITCA 650 Phase 1b Study for the Treatment of Type 2 Diabetes. 2009. Available at: http://www.intarcia.com/media/pressreleases/2009-apr-24-completes-enrollment.html.  Accessed 2015.

44. Our Technology. TARIS Biomedical. Available at:

COMMERCIALIZATION RIGHTS IN U.S. AND CANADA TO 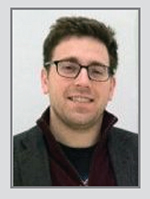 Samuel D. Trohman is currently a Marketing Specialist for Lubrizol LifeSciences. Mr. Trohman earned his BA in Biology from the University of Colorado in 2010 and his MBA from Indiana University’s Kelley School of Business in 2014. He was also a coauthor for Cardiac arrest: unveiling the differences within. Crit Care Med (2011). 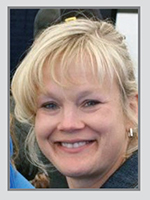 Joey L. Glassco is a Global Market Manager for Lubrizol LifeSciences. Her main focus is new business development in the area of drug-eluting devices. Her efforts support the company’s position as a supplier of pharmaceutical and medical polymers to include formulation and manufacturing.

Dr. Elena Draganoiu is a Technology Manager with LifeScience Polymers business at Lubrizol. She is a graduate of the University of Cincinnati (PhD, Pharmaceutics). She has 10 years of experience working in the excipients industry and has also worked as a resident pharmacist and in academia. Dr. Draganoiu is responsible for leading Lubrizol’s technical programs in the area of pharmaceutical ingredients. 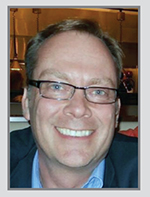 Carey Boyum is a Technical Marketing Manager for Lubrizol LifeSciences and has held various sales and marketing positions since 2004. Currently, he is actively promoting products from Lubrizol’s acrylic acid and thermoplastic polyurethane technology platforms, primarily to the pharmaceutical market. He earned his BA in Chemistry from Augustana College.