In 2021, the global CDMO market is estimated to be $124 billion and is expected to grow at a CAGR of 7% in the coming years.1 Furthermore, the manufacture of pharmaceuticals, including formulation development, is also expected to account for $29 billion this year. An ever-increasing share within formulation development can be attributed to the fact that more than 70% of new chemical entities pose a challenge to the industry due to their poor solubility. In the past, there have been several reasons why start-ups, but also at Big Pharma, have progressively increased the outsourcing of their development activities, and it can be assumed that this trend will continue. Why is this so? Let’s begin with the start-up companies. Usually, due to short-term financing of a mostly virtual company, there is no available in-house formulation expertise, and because the development activities are under severe time pressure, they cannot be built up in a timely manner. In the case of Big Pharma, there are often numerous projects competing with each other thus certain activities are out-sourced. Time-to-market and therefore speedy development is also key. In addition, with regard to special technologies, the internal expertise for innovation may not have been built up yet, or at least not with sufficient capacity. From a customer’s perspective, what does the ideal technology service provider look like? The decisive criteria are: development expertise (proven track record), specialization in the desired innovative technologies, flexibility, experience in dealing with start-ups and/or Big Pharma, as well as reliability. A further plus would also be offering the manufacturing of finished products, preferably for the major markets or at least for launch quantities.

Due to the increasing demand for drug delivery systems that are able to improve the properties of low soluble, poor permeable, or highly dosed new and existing drug substances, technology-driven CDMOs can offer a wide range of technology platforms to overcome such challenges. Over the past decade, Losan Pharma, a privately owned pharma-technology company located in Germany, has implemented several technology platforms that can significantly improve the performance of active pharmaceutical substances in-vivo. Enabling technologies, such as Nanotechnology (NT), the use of Amorphous Solid Dispersions (ASDs), or loaded Silica Carriers (SCs) containing amorphous drugs, are examples of a battery of possible solutions to improve the uptake and thereby the bioavailability and maximum plasma concentration of active substances of a formulation. The Stick Pack technology can be used to facilitate the oral intake and to increase both application convenience and patient compliance, especially for elderly people and for high-dosed formulations. In addition, using mini tablets or multiparticulate formulations in the stick packs offers a wide application range due to the different target release profiles (modified, sustained, dual release), which can be easily achieved. New drug delivery technologies, such as the oral drug delivery of peptides and proteins via an innovative Nanoliposomal Technology (NLS) or 3D printing for use in Personalized Medicine, will complete the existing drug delivery platforms.

The major advantage using NT technology is the fast set-up, the significant increase of solubility, and thereby also the improvement of bioavailability. In addition, a reduction of food effects is achieved by maintaining the crystalline nature of the active pharmaceutical ingredient.2 A further advantage is the easy integration of this process step into the conventional manufacturing process, leading to final dosage forms such as tablets, capsules, or stick packs. A top-down process via wet ball milling provides several advantages from lab-scale screening to production scale using, for example, the milling equipment from Netzsch Grinding & Dispersion. The outlined process’s advantage is the low inter-batch variability and taking the wear gain and energy consumption into account, the excellent scalability, and thereby the control of the entire process (temperature, flow rate, production time). Special Zircon/Yttrium stabilized beads ensure that only the minimum of these material’s residual amounts are found in the final product, usually less than 20 ppm. Although many different models have been tested out to predict the behavior of new drug substances in the NT, as yet, no generally applicable model exists that is predicative and could be used easily for prototype development. Therefore, a special screening technology that uses the dual centrifugation technique offers the advantage of covering 40 samples per run in 2-ml tubes within 1.5 hours.3 GRAS-listed excipients are typically used to stabilize the nanocrystals and to avoid Ostwald ripening. This screening technique has already been proven to be predictive at production scale of 30 l.4 Typical screening results are shown in Figure 1 comparing the Delta Vita 1 system with standard planetary mills. 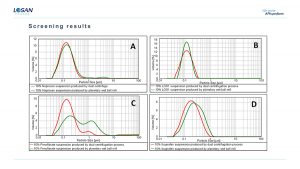 Pilot-scale and production-scale trials have been performed using equipment as depicted (Figure 2).

Further down-processing can be done with conventional production equipment, such as Fluid Bed Drying on special carriers, eg, mannitol followed by compression, encapsulation, or stick packaging. As an example, the proven Nanoeffect in rats that was predictive also for humans is shown in Figure 3.

If a higher increase of solubility and thereby an improvement of bioavailability and permeability (eg, for BCS IV compounds) is needed, the use of ASDs is recommended. ASDs can be produced by spray drying or Hot Melt Extrusion. Using the HME technology avoids any organic solvent use, provides the additional benefit of scalability from lab- to production scale if the L/D parameter is considered, and is a continuous process enabling the constant production at a given speed of the extrudate. An efficient and low API consuming formulation screening system is of high importance for prototype development. The use of either a solvent-based film casting or a melt-prep-system to produce mini discs that can be stored and analyzed to verify that no recrystallisation (microscope, DSC, XRPD) of the embedded drug substance occurs over time under different storage conditions is depicted in Figure 4.

When a suitable polymer system has been identified, many process parameters have to be considered for a successful ASD prototyping (Figure 5). 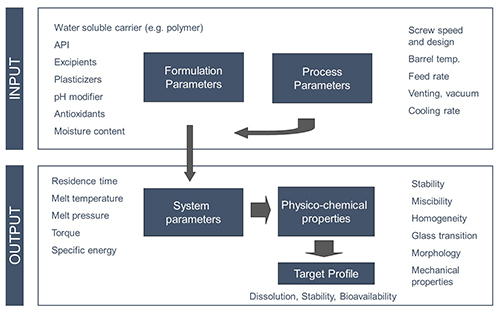 Finally, down-processing to reach the target oral dosage form again uses conventional process steps leading to tablets, capsules, or stick packs (Figure 6). The target release profile can be influenced by the polymers to be used in the HME process, eg, the use of HPMC-AS, which prevents the active principle release in the stomach. Considerable care must be taken in order to prevent the degradation of the active ingredient by the release of succinic or acetic acid from the polymer during the process conditions.

Figure 7 shows examples of the different behavior of active ingredients in different polymer systems investigated in bio-relevant dissolution media (FASSIF) or different prototypes in a CaCo2 permeability study, which also proves the enhanced permeability for the shown new chemical entity compared to a nanocrystal or a liquid formulation.

Use of Silica Carriers (SCs)

The loading of APIs into mesoporous silica carrier (SC) systems is a fairly new approach for achieving a higher solubilization for low-soluble compounds during prototype development. Although not many SC-formulated drugs have reached the clinical trial status yet, it is a promising approach to problems that may occur with the NT or ASDs. In principle, there are two different strategies that may be followed for SC technology (Figure 8).

If the dry loading process is applied, the resulting binary and ternary systems are investigated and typically show a well-controlled process that is also not too corrosive for the stainless steel barrels in the extruder (Figure 9).

Finally, the prototype formulations may exhibit a strong spring or parachute effect as shown in the example with Efavirenz formulations in Figure 10.

Prototyping by using mini tablets has gained increasingly more interest in the past years. One of the reasons for this, is the fast and more uniform release profile of the corresponding APIs in the GIT compared to monolithic dosage forms such as tablets. In addition, improved patient compliance can be achieved as mini tablets in stick packs or capsules can be taken out and mixed with drinks or food, thereby facilitating their application. Furthermore, in capsules or stick packs, different dosage strengths can be easily formulated by using different filling weights. In the case of complex release profiles, eg, for a combination of immediate- and modified-release tablets, one part of the mini tablets can be coated with a functional polymer while the other part can be used without any coating. Another benefit is the formulation of combination products, which can be done very easily. Finally, mini tablets in stick packs can offer an advantage with regard to patient compliance, especially for children and elderly people with swallowing difficulties.

In modern drug delivery strategies, the formulation of multiparticulate dosage forms (eg, multiple unit pellet systems) is a key element. As outlined above, with a uniform release profile for the mini tablets, a large number of different options for different release profiles (immediate, modified, sustained, and dual release) can be achieved, and when combined with the stick pack technology, lead to improved patient compliance. Especially regarding the use and application of high dosage strengths, even up to 3 g per dose could be a major advantage if combined with the stick pack technology (Figure 11). 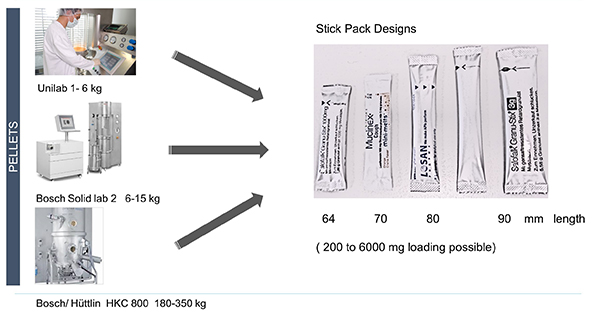 Enabling technologies, such as the Nanocrystal Technology (NT), the HME (ASD) Technology, and the Silica Carrier (SC) Technology, are valuable tools in the design and development strategy to overcome the problems associated with a majority of current APIs with regard to low solubility and permeability for BCS II and IV compounds. If the outlined process steps for these technologies can be integrated into a viable manufacturing set-up, this will increase the acceptance of such modern and advanced approaches  and ultimately lead to better formulated drugs across international markets for the benefit of patients. If these technologies are further combined with new packaging technologies, such as the aforementioned Stick Pack technology, the aspect of convenience will also significantly improve. If CDMOs like Losan Pharma offer a wide range of possible technology platforms, the chances are very high that one of these technologies will fit to the target profile for a given drug and reach the market as a result. These technologies are, in part, very complex and require a lot of experience and know-how to avoid any pitfalls or problems during application. Despite the full models, the formulation screening phase is an important part of designing the correct prototype formulation for further development. These aspects must be carefully considered when the formulation strategy is developed.

Losan is a pharma-technology company focused on the development and manufacture of cutting-edge medicinal products with improved API performance and/or convenient application. Since 1992, Losan has been supporting its customers around the world in the development and manufacture of pharmaceuticals. Today, more than 550 employees at two sites work for the benefit of customers around the world. Based on its specific development know-how and platform technologies, Losan provides solutions to challenging tasks with a view to improved API stability, superior bioavailability, designed delivery, and increased patient compliance. Losan is the one-stop-shop for development and commercial manufacturing services for Europe, the Americas, and Asia to support its customers in marketing value-added products for the benefit of their patients. Today, pharmaceuticals developed and manufactured at Losan and are exported to more than 70 countries on behalf of customers. Its sites are regularly inspected by the local authorities and have also successfully passed inspections by international authorities – these include among others the US-FDA, ANVISA, and the Russian Authority.