Arginine, also known as L-arginine (symbol Arg or R), is a basic amino acid widely used in biopharmaceutical processing and stabilization of biotherapeutics.

The structural components of amino acid include an α-amino group, an α-carboxylic acid group, and a side chain in a guanidino group. Amino acids arginine (Arg), lysine (Lys), and histidine (His) have basic side chains at neutral pH.

As described in Table 1, several biotherapeutics including monoclonal antibodies (mAbs), fusion proteins and recombinant proteins are formulated with arginine or its salts. The most common application of arginine is in formulating high concentration antibody formulations, wherein arginine reduces viscosity of the antibody solution.

APPLICATIONS OF ARGININE IN BIOPHARMACEUTICALS

Viscosity Reduction
Several studies describe the use of arginine hydrochloride (Arg HCl) and an equimolar arginine-glutamate (Arg-Glu) to reduce the viscosity of high concentration (> 250 mg/mL) antibody solutions (5,6). Viscosities of bovine gamma globulin solution (250 mg/mL) and human gamma globulin solution (292 mg/mL) decreased to below 50 cP in the presence of 1,000 mM Arg HCl (5). Arg-Glu or Arg HCl, reduced the viscosity of a ∼250 mg/mL mAb solution up to 6-fold. With Arg-Glu, the viscosity of the mAb solution was reduced to 30 cP and for a polyclonal sheep IgG solution to 17 cP both at ∼250 mg/mL (6).

Refolding, Protein Solubilization & Protein Aggregation
Arginine is often used as a stabilizer during refolding of proteins and a general inhibitor of aggregation (7-9). Arakawa et al. compare the mechanism of suppression of protein interactions by arginine compared to betaine and guanidine hydrochloride (10). The mechanism by which arginine inhibits aggregation is complicated and in general depends upon several factors including the concentration of arginine, concentration of protein and the type of protein being investigated. Several studies investigate the mechanism by which arginine inhibits aggregation and protein stabilization (11, 12). Equimolar mixture of arginine and glutamic acid is known to significantly enhance protein solubility and stability (13-14). This mixture is also known to increase the storage stability of monoclonal antibodies in solution (15).

Lyophilization
The role of arginine in freeze-drying of protein pharmaceuticals has been recently reviewed (16). Studies also describe the lyophilization of protein formulations with arginine and other lyoprotectant like sucrose and mannitol (17-19). These studies highlight the effect of arginine concentration on cake properties and the general appearance of lyophilized formulations.

Table 2 (a and b) describe below the measured levels of trace metals in four lots of arginine along with limit of quantitation (in ppb). 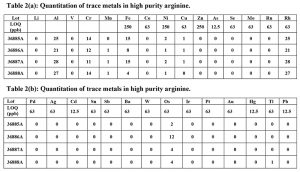