Sucrose or saccharose is a disaccharide composed of glucose and fructose. Figure 1, depicts the chemical structure of sucrose. It has been used in protein stabilization particularly biotherapeutics since the past three decades. The study by Lee and Timasheff, probes the mechanism of stabilization of proteins by sucrose (1). Several other studies besides the fundamental study by Lee and Timasheff (1) have evaluated the stabilization mechanism of sucrose (2-4). These fundamental studies highlight the importance of utilizing thermodynamic stabilization approach for protein pharmaceuticals. Besides they highlight the use of conformational stabilizer like sucrose which acts by the preferential exclusion mechanism. 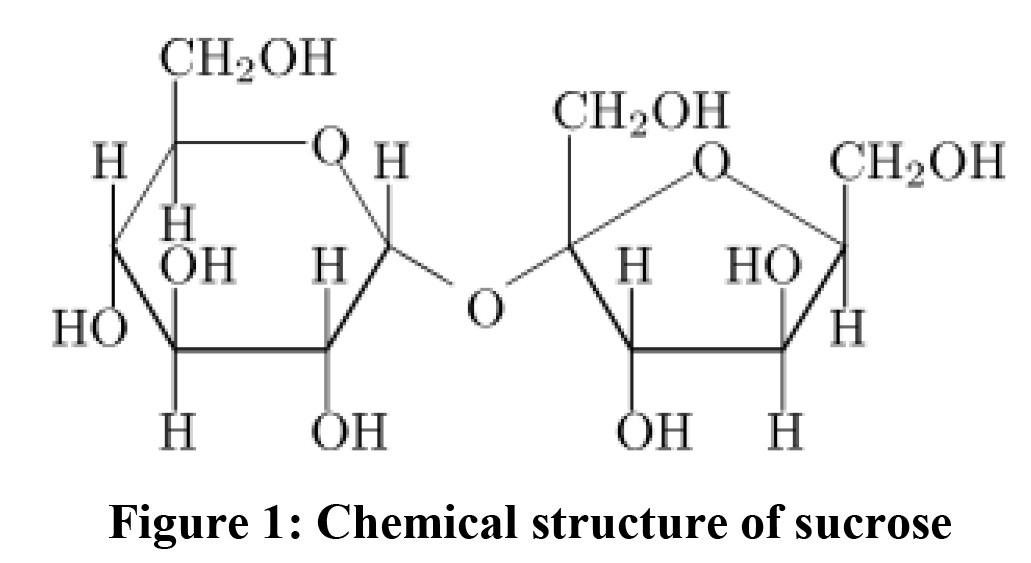 Several antibody formulations that have been approved for therapeutic indications have been stabilized by sucrose (Table 1 and 2). As observed, sucrose has been used to stabilize a diverse set of antibody products including human antibodies, humanized antibodies, chimeric antibodies, Fc fusion proteins and antibody drug conjugates (ADC). Sucrose has been successfully used in both liquid and lyophilized products. 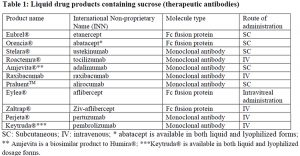 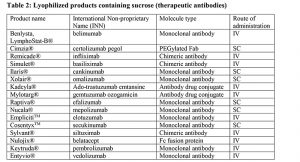 Besides antibody modalities, sucrose has been successfully employed in formulation and stabilization of other non-antibody type biotherapeutics including cytokines, hormones and blood clotting factors. It is due to the conformational (thermodynamic) stabilization property that sucrose can serve as a universal stabilizer for such diverse protein therapeutics. 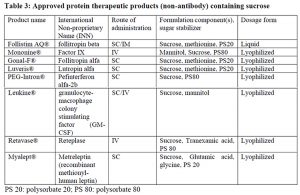 CONSIDERATIONS FOR USE OF SUCROSE IN BIOPHARMACEUTICAL FORMULATIONS

Sucrose, among other disaccharides (trehalose) and polyols (sorbitol, mannitol) is a preferred stabilizer in lyophilized products since it stays amorphous during several freezing (or freeze-drying) steps. Several studies highlight this property and compare the behavior of sucrose with other polyols (5-8). Sucrose is a component of several platform formulation approaches used for protein formulations (9, 10). While sucrose is widely used for stabilization of liquid protein formulations as well, acid catalyzed sucrose hydrolysis could generate glucose reducing sugar at higher temperatures (11, 12). In a study evaluating the effect of sucrose hydrolysis on the stability of protein therapeutics particularly during accelerated stability studies, it was observed that the monoclonal antibody MAB001, aggregated faster in sucrose formulation compared to excipient-free formulation at pH 4.8 at 29◦C (13). It was also demonstrated that sucrose hydrolysis and the corresponding formation of glucose lead to formation of glycated antibody which had a higher aggregation tendency. In cases where the formulation has to be liquid and slightly acidic, it is recommended to use trehalose which has remarkable stability against acid hydrolysis. Pfanstiehl’s sucrose is extensively characterized for reducing sugars and such data is available upon request.

For formulators, it is important to be aware of the source of high purity sucrose, which typically comes from beet or cane. The natural source of excipient, purification process, storage conditions and containers could be sources of trace impurities in the sugar excipient and can ultimately affect product quality and stability. In a review, Wang and colleagues summarize the impact of residual impurities and contaminants on protein stability (14). In Brazil, the metal levels in sugar canes could be traced back to the soil quality which had an influence of municipal landfill and a medical waste treatment system (15). In order to ensure product stability and safety, formulators need to be well aware of the excipient’s quality, source and performance in their product. Trace metals are known to promote metal catalyzed oxidation (MCO) of the therapeutic proteins and destabilize them. Such modifications due to MCO can make the proteins potentially aggregation prone (16, 17).

β-Glucans are commonly found polysaccharides in sugar-based products. β-Glucans are polysaccharides of D-glucose monomers linked by β-glycosidic bonds. Cellulose, a common polysaccharide comprises of chains of glucose molecules with 1-4 linkage while β-Glucan comprises of chains of glucose molecules with 1-4 linkage with an occasional 1-3 linkage. Several studies describe approaches to control and eliminate β-Glucans from bioprocessing. Sucrose and Cellulose based filters have been identified as common sources of β-Glucan contamination in bioprocessing and in blood products (18-20), these studies also describe approaches to reduce β-Glucan contamination in bioprocesses (19, 20). High amounts of β-Glucans in pharmaceutical products can illicit an immune response and hence it is necessary to control their level in biopharmaceutical products (21-23).

The Limulus amebocyte lysate (LAL) method is widely used to detect and quantitate bacterial endotoxin in pharmaceutical products. (1→3)-ß-D-glucans can interfere and give ‘false positives’ in LAL test (24). Glucan blocker is used to prevent the interference from β-D-Glucans and accurately quantify endotoxin (20). Pfanstiehl quantifies both β-Glucans and endotoxin levels in each lot of sucrose manufactured. Table 4, describes the quantification of endotoxin and β-glucan in multiple lots of cane and beet derived sucrose. Cane derived sucrose has significantly higher amounts of β-Glucans which can interfere with endotoxin quantitation if not sufficiently blocked during endotoxin testing. Additionally, knowing the level of β-glucans is important depending the point in the biopharmaceutical process sucrose is utilized. Pfanstiehl controls specifications for endotoxin and β-glucans as presented in Table 5. 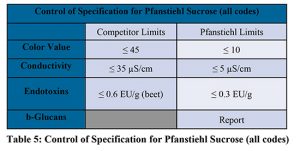 In a Quality by Design (QbD) scenario, our approach allows end users to rationally select the well characterized excipients during biopharmaceutical development and develop a control strategy for biologic drug products. Pfanstiehl recommends its customers to discuss their endotoxin and β-glucan control strategy and the methods employed to control these impurities in final product. Pfanstiehl quantifies both β-Glucans and endotoxin levels in Sucrose for biopharmaceutical applications. This approach would help end users rationally develop endotoxin specifications for their product and have a microbial control strategy for manufacturing product of consistent quality.