MONOCLONAL ANTIBODIES – The Development of Therapeutic Monoclonal Antibody Products: A Comprehensive Guide to CMC Activities From Clone to Clinic 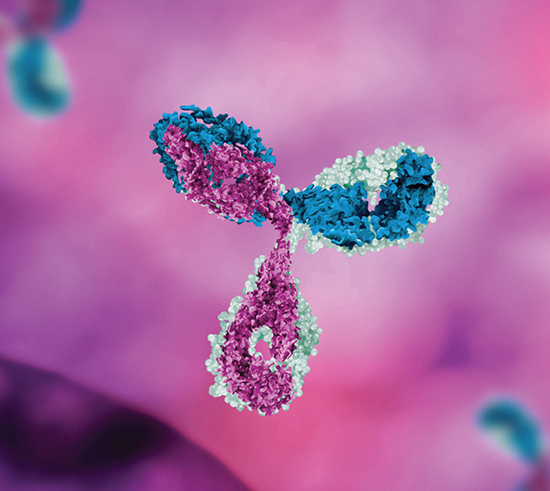 When The Development of Therapeutic Monoclonal Antibody Products was originally released in 2010, it quickly became an indispensable tool for those involved in the development or financing of monoclonal antibodies. It served as a guide to the complex technical, regulatory, and strategic Chemistry, Manufacturing, and Controls (CMC) activities necessary to successfully advance new monoclonal antibody products to clinical trials and the market as quickly as possible. This Second Edition has been fully revised and updated for 2017, to provide a roadmap for the development of a monoclonal antibody product from initial discovery through the filing of an Investigational New Drug Application (IND) or Investigational Medicinal Product Dossier (IMPD) or equivalent for first-in-human clinical trials. The primary focus of the report remains on the technical, regulatory, and management issues related to process development, manufacturing, quality control, and analysis of full-length single specificity monoclonal antibody products produced in mammalian cell culture. New to the Second Edition is an in-depth look at Quality by Design (QbD) for monoclonal antibodies in an all new chapter, an entirely new perspective on cell line development and engineering, a fresh look at process validation in line with current regulatory requirement, and updates aligning the content with today’s philosophies and practices throughout.

The Development of Therapeutic Monoclonal Antibody Products Second Edition goes beyond other reports by incorporating the latest technical developments and integrating strategic and regulatory considerations with these technical requirements. This report serves as a guide to product development companies, service providers, investors, and analyst as they work their way through the complex and rapidly evolving world of therapeutic monoclonal antibodies.

As shown in Figure 1, IgG antibodies usually have four inter-chain disulfide bonds, two connecting each light chain with a heavy chain and two connecting the heavy chains to enable dimerization. This feature of the Fc region of the heavy chain can be utilized to form dimers of other therapeutic proteins by creating a fusion between the protein of interest and the IgG heavy chain Fc sequence. Among the potential therapeutic benefits of these fusion proteins is a longer serum half-life of the fusion protein compared to the monomer used without linkage to the Fc region and bivalent functionality. Intra-chain disulfide bonds are also found in the variable and constant regions. The intra-chain bonds in the variable regions help create the three dimensional structure that enables proper antigen binding. Low levels of free sulfhydryl groups from disulfide bonds that did not form properly can be found in recombinant antibodies and can create product stability problems. 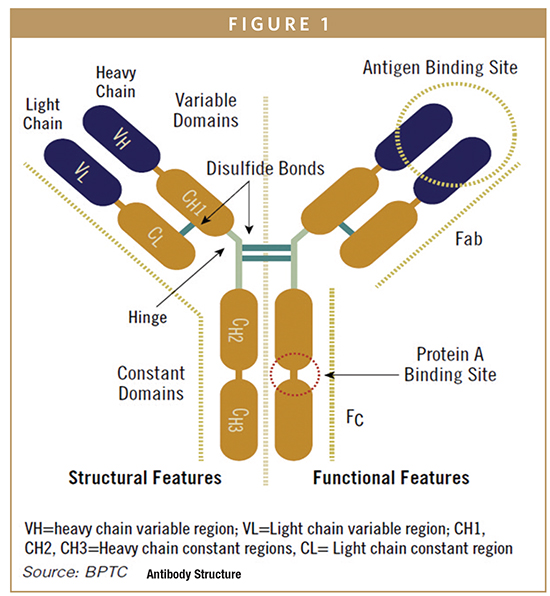 The antigen binding function of an antibody is located within the 110 amino acid variable region at the N-terminus of each chain. Within the variable regions, three surface-exposed hypervariable amino acid loops, known as complementarity determining regions (CDR), are embedded in a relatively conserved framework structure. The six combined CDRs from the heavy and light chains form the antigen-binding site, and slight changes to CDR sequences can significantly alter affinity and specificity for the target antigen. Because the antigen-binding function of an antibody is localized in such a specific region of the protein, molecular engineering tools can be used to introduce novel variability in the CDRs of one or both chains followed by in vitro selection for improvements in target binding. Binding at the antigen-binding sites on each arm of the antibody can occur independently so that the antibody can also be engineered to contain two different antigen-binding domains. Such bi-specific antibodies are currently under development by several companies. In addition, if the variable region of an antibody is cloned independently and expressed as a soluble monomer, it will retain the ability to bind to the target antigen. These monovalent products are also under development by several companies.

In addition to antigen-binding function, antibodies contain oligosaccharides on the constant region that can interact with other components of the immune system to activate effector functions, such as antibody-dependent cellular cytotoxicity (ADCC) or complement-dependent cytotoxicity (CDC). If immune system activation is important for the therapeutic activity of an antibody, the oligosaccharide structure is often critical to the clinical behavior of the molecule. For IgG antibodies, an N-linked biantennary oligosaccharide is attached to a highly conserved asparagine. The core structure contains three mannose residues and two N-acetyl-glucosamine residues (GlcNAc) as shown in Figure 1. In some monoclonal antibodies, the carbohydrate structure may also contain fucose. If present, the fucose residue is linked to the proximal GlcNAc residue, and additional terminal sugar residues, including galactose and sialic acid, are also present. Occasionally GlcNAc is added to the central mannose to form a structure known as a bisecting GlcNAc, which has a significant impact on antibody function.

Variation in the terminal sugar residues is the basis of most of the glycan heterogeneity seen in purified, recombinant monoclonal antibodies. This can influence which, if any, effector functions are activated. For example, the oligosaccha-ride can contain either no (G0), one (G1), or two (G2) terminal galactose residues (Figure 2); increased galactose content can increases CDC activity while ADCC activation is not known to be affected by the galactose content of the oligosaccharide. Likewise, if fucose is not present on the core GlcNAc, the antibody exhibits enhanced ADCC activity compared to the fully fucosylated form but no impact on CDC has been observed. In addition, variation in the oligosaccharide structure in the binding protein of an Fc-fusion may greatly impact overall half-life in a way not generally seen with whole antibodies. For example, sialic acid content in the binding protein may greatly affect half-life or efficacy of the product. Glycan variability is primarily influenced by clone selection and cell culture conditions, but should also be considered during discovery and lead candidate identification, especially when choosing a heavy chain constant region for a particular target product profile. If effector functions are not required for the intended therapeutic mode of action, it may be most effective to develop an IgG4 antibody that has less effector function. For example, for monoclonal antibodies whose therapeutic activity is entirely based on blocking another protein from binding to the target, effector function and oligosaccharide structure are not critical to therapeutic function. 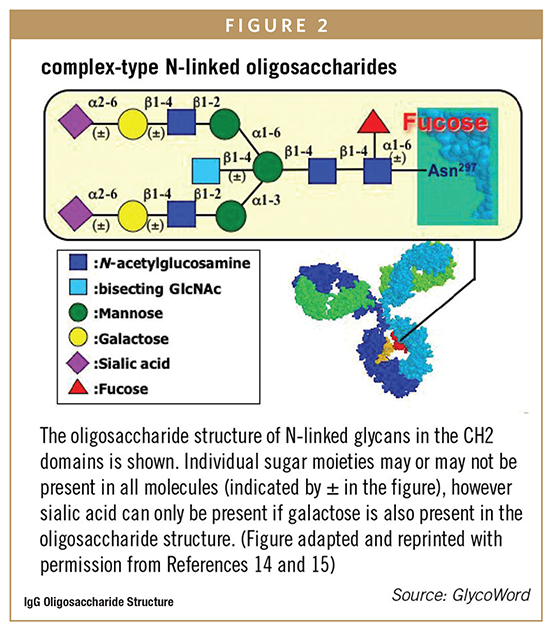 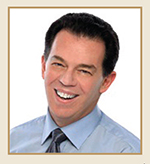 Dr. Howard L. Levine, President and CEO of BioProcess Technology Consultants, Inc. (BPTC), is a pioneer and thought leader in the biopharmaceutical industry with extensive strategic and operational experience in biopharmaceutical product development and commercialization. In his more than 35 years in the biopharmaceutical industry, he has assisted numerous companies in developing biological products, provided strategic input in the development of new manufacturing technologies, and participated in the successful commercialization of several of these products. Prior to founding BioProcess Technology Consultants in 1994, Dr. Levine was Vice President of Manufacturing Operations at Repligen Corporation and previously held positions of increasing responsibility in process development and manufacturing at Genentech, Amgen, and Xoma. 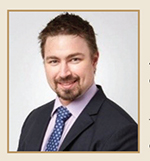