Intradermal drug delivery is increasingly recognized as a potential solution to many of the challenges faced by new and existing medicines. Intradermal dosing provides the opportunity to more effectively administer agents such as small molecules, biologics, and vaccines, allowing for improved bioavailability. Nonetheless, the widespread use of this route of administration continues to be limited by technical challenges in the performing of intradermal injections, which requires specialized training and has poor reproducibility.

Microneedles are a rapidly growing technology developed to solve issues surrounding intradermal drug administration. While many microneedle platforms have been developed over nearly 2 decades, the issues and concerns remain largely the same. A simple, robust, reproducible platform that can be scaled for widespread use has not been achieved. Some of the existing microneedle products have addressed one or more of the limiting hurdles in development, but no single platform has yet addressed them all. Microdermics’ needles are novel, hollow, metallic microneedles, which offer all the benefits of intradermal drug delivery in a simple design that is completely manufacturable. The following describes the Microdermics technology and its improvements over the conventional subcutaneous route of administration.

Intradermal dosing has been recognized as a route of administration that would be beneficial for small molecules, biologics, and vaccines. The dose sparing effects have been well described; these would reduce the amount of drug required for injection and reduce costs.1Additionally, intradermal injection of vaccines shows improved efficacy when compared to subcutaneous and intramuscular injections. Biologics, such as insulin and human growth hormones, are given subcutaneously as they cannot be administered orally due to poor absorption and/or instability in the gastrointestinal tract.2Intradermal delivery would provide an advantage over current methods because of faster absorption from the skin and improved or equivalent bioavailability. These results suggest that intradermal injection would be an improved method of drug delivery for many agents. So the question remains: why haven’t we seen more intradermal injection products?

The method for intradermal injection requires highly trained, specialized staff, which increases the cost associated with this route. For life-saving drugs like insulin this method may not be desired, as patients typically need to inject themselves multiple times daily. Microneedle devices with a low efficiency – those that cause a wasted dose due to difficult administration, leakage, or dead volume in the injection system – can also diminish the benefits of a higher bioavailability and result in a greater waste of resources. Thus, while intradermal administration provides improvements over the current approaches, the lack of reproducibility and technical difficulty have made it difficult to adopt widespread intradermal injection.3

Microneedles are needle-like structures that have been produced at the micron-scale. While traditional hypodermic needles are large in comparison, allowing them to reach deep into the body beyond the skin, microneedles were developed to penetrate the skin’s top most layer and deliver drugs into the dermis. Because of their size, microneedles do not behave in the same way as traditional hypodermic needles in that they allow for intradermal dosing, whereas other needle systems are typically used for dosing via intravenous, intramuscular, and subcutaneous routes.

Microneedle devices could allow for the intradermal route of administration to become a widespread method for both healthcare professionals and patients. As noted by the World Health Organization in regard to microneedle devices: a simple, reliable, and reproducible technology is required to make this method viable.4While many devices are in development, the cost of large-scale manufacturing and commercialization of these devices may become the limiting factor in their routine inclusion in the healthcare setting.

Solid microneedles were among the first to be developed. They are solid structures that puncture the skin while the drug is applied to the site of the puncture as a topical cream. This delivery method is simple and does not require significant training, thus simplifying the process for patients, but placing the burden of manufacturing and reformulation on pharmaceutical companies, as most injectable drugs would have to be recreated (and possibly re-approved by health agencies) as a cream or other topical solution. There are also drawbacks in delivering large doses of drugs to patients and sufficiently controlling the amount of the drug that is absorbed. Given these issues, this would lead to high and unnecessary costs for drugs already on the market, but may prove useful for new candidate drugs designed for this system.

Coated and dissolvable microneedles are among the newest types of solid microneedles. They deliver the drug directly into the targeted area of the skin as a dissolvable polymer matrix microneedle releases the drug it carries. Although these microneedles would allow for the delivery for a more precise dose of drug compared to that of the topical cream, coated and dissolvable microneedles still face important limitations. The amount of drug that can be contained in the dissolvable matrix of a microneedle device that is the size of a household adhesive bandage may be too low to treat a given condition or have the desired effect, and a patch with a fixed size means that the dosage is also fixed and cannot be customized by the administrator in the way that a conventional syringe can. While there may be utility in these systems, solid microneedles are not versatile enough for widespread use over many different drug classes.

Hollow microneedles function in much the same way as traditional hypodermic needles: through the distribution of an injectable drug through the needle and into the targeted tissue; however, in the case of microneedles, the drug is injected into the dermis rather than subcutaneous tissue or muscle. Hollow microneedles mitigate the need for drug reformulation, which means they can readily be used with most existing drugs and vaccines approved for the intradermal route of administration. These approved drugs will see a rapid path to commercial adoption of hollow microneedle-based injection systems. Drugs that are suitable, but not yet approved, for intradermal delivery, such as insulin, will require a combination product clinical trial before completely adopting hollow microneedle-based injection systems.

After work in the early 1990s on individual microneedles and individual rows of microneedles, the first two-dimensional hollow microneedle array was made from metal using a costly, non-reusable silicon mold. Most early microneedle devices were manufactured in silicon through technologies such as microelectromechanical systems (MEMS) manufacturing methods, including deep reactive ion etching (DRIE) and lithography. The goal was to create high aspect ratio, hollow core microneedles structures. The challenge in this manufacturing system lies primarily in the high cost of infrastructure and maintenance of the silicon manufacturing tools. Many of the microneedles that are currently being commercialized come from this costly manufacturing process, leading to difficulty in scaling and adoption. However, these structures are valuable tools in demonstrating the potential of microneedle technology and are largely still in use for research studies.

Microdermics has also developed multiple microneedle arrays for specific drugs and targeted areas of the body to increase efficacy for the delivery of certain drugs. The second array shown in Figure 1, for example, is designed to maintain the tension on the surface of the skin on an area such as the face to allow the microneedles to penetrate the surface into the dermis more effectively. Due to the microneedles’ design, injections such as vaccines can be administered in lower doses because the target layer of skin contains more immune cells than subcutaneous tissue. 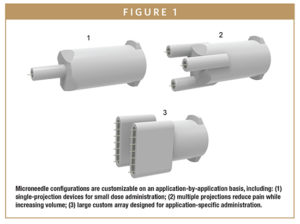 As importantly, Microdermics utilizes a mold for microneedle fabrication on metallic sheets from which customizable arrays may be cut before integration into a device. These micromolds are also reusable, speeding up production time along with transferability and scalability. This means that mass production and commercialization of microneedles is now a possibility.

Microdermics microneedles will allow pharma companies to unlock the potential of the skin for their current and planned drug products. These microneedles could provide lifecycle extensions of existing drugs, innovative applications that are only possible with access to delivery through the skin, or the accommodation of specific patient needs.

Unlike other technologies in this field such as jet injectors, transdermal patches, or other hollow microneedles, the Microdermics platform can adapt quickly and provide a solution that meets both the technical and economic needs of their pharma partners.

In 2017, Vetter Pharma, a leader and innovative provider of aseptic prefilled drug delivery systems announced a strategic cooperation agreement with Microdermics. The companies have entered this agreement to overcome the roadblocks to commercialization, particularly in scalable aseptic manufacturing at the later phases of development. Vetter is one of the leading contract development and manufacturing organizations, providing a combination of device development and associated drug product manufacturing and packaging services to pharmaceutical companies. Together, Microdermics and Vetter can provide intradermal solutions that are more commercially viable than other, similar technologies such as other hollow microneedles, jet injectors, or transdermal patches.

Dr. Claus Feussner, Vetter’s Senior Vice President Development Service stated at the time of the agreement that Vetter was “very happy to enter into this agreement with Microdermics, and we are excited by the initial experience of cooperation and entrepreneurial spirit we have established with key individuals at this company. We believe that microneedles are a particularly innovative technology and may prove to be a promising future alternative for selected areas of drug delivery.”

Microdermics’ hollow metallic microneedles can be adapted to deliver any number of specialized and expensive biologics and other drugs, particularly those with uncommon viscosities and doses. Microneedle devices can be manufactured to the specifications and requirements for high-cost biologics. 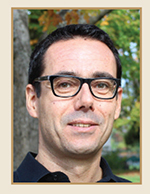 Dr. Boris Stoeber is a Co-founder and Chief Technology Officer for Microdermics. He has been researching microelectromechanical systems (MEMS) and microfluids for 20 years. He earned degrees in general, electrical, and mechanical engineering and was a Post-Doctoral Fellow of chemical engineering with the University of California. He is currently a professor at the University of British Columbia (UBC) in the departments of Mechanical Engineering and Electrical and Computer Engineering. He holds the Canada Research Chair for Microfluidics and Sensing Technology and holds three US patents with six international patents pending for MEMS and measurement technology. 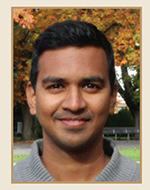 Dr. Sahan Ranamukha is a Cofounder and Vice President of Research and Development for Microdermics. He has been involved in development and testing microneedle-based drug delivery technologies for more than 5 years. He earned his PhD in Biomedical Engineering at UBC under Dr. Stoeber, and was a recipient of the Vanier Canada Graduate Scholarship. His research interests are in drug delivery, medical device development, and therapeutic drug monitoring. 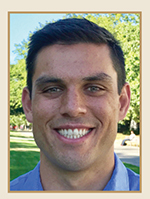 Rory St. Clair is the Director of Technical Operations and oversees Microdermics’ daily operations. He brings skills in project management, cross-functional collaboration, financial planning, and operations management. Previously, he has worked with various start-up companies – life sciences and otherwise – to build consensus, manage growth, improve accountability, and drive efficiency. He has a bachelor’s in economics and biology, with a minor in mathematics.