Softgel is a proven and effective delivery technology for poorly soluble drugs and can incorporate a wide range of fill formulations to optimize the bioavailability of active pharmaceutical ingredients (APIs). The following will explain how suitable modeling methodologies can predict the solubility of drugs in a range of solvents and mixtures, and how this approach is particularly applicable to the early stage development of softgel formulations when only a small amount of API may be available.

In the early phase of drug development, it is common to have a limited amount of API available for reasons such as the complexity of its synthetic route or high manufacturing cost. Finding the appropriate formulation for a drug is often challenging, labor-intensive, and requires a significant amount of API in order for it to be tested in a range of solvent vehicles. As a result, many programs are suspended or slowed down before progressing into animal pharmacokinetics (PK), toxicity, or first-in-human (FIH) studies. In addition to impeding rapid progression of drug development, low initial quantities of API may result in handling difficulties due to the need to process small batch sizes on industrial-scale machines, thus affecting yields, with typical losses being in the range of 300 to 500 grams per batch.

For poorly soluble compounds, development of formulations is usually achieved using lipid-based drug delivery systems (LBDDS incorporated into softgel technology) to improve their bioavailability. In most cases, optimization of the bioavailability can be achieved by utilizing suitable delivery vehicles that maximize the solubility of the API. The process of selecting this method generally involves screening a set of platforms and technologies exhibiting a diverse range of hydrophilicity, lipophilicity, and solubilizing properties. It may also involve the evaluation of solubility in both the neat vehicle and in a mixture.

Softgel technology not only enables improved delivery of poorly soluble BCS Class II and IV drugs, but in cases where solubility is not the only biopharmaceutical hurdle to overcome, membrane modulation permeability can also be manipulated, thereby enabling the delivery of macromolecular BCS Class III drugs.

In addition to its advantages in enabling the formulation of technically challenging drugs, softgel technology is also well positioned for optimal formulation of drugs for which limited amounts of API are available.

The basic principles of LBDDS technology, which has proven to be one of the most successful advanced drug delivery methods applied to BCS Class II drugs, ensure that drug substances are delivered in a solution form that is maintained within biological fluids before the API reaches the intestinal membrane. In addition to the solubility issue, some of the poorly soluble drug candidates that Catalent is formulating have further challenges to be met to give the desired target product profile. LBDDSs have the versatility to offer a broad range of formulation possibilities.

For example, some poorly soluble drugs display excessive inter/intra individual variability, which may not be compatible with the desired therapeutic effect. There are several strategies specifically designed to reduce such variability, including the self-microemulsifying drug delivery system (SMEDDS), a lipid-based “preconcentrate” of solubilized drug composed of lipid excipients; surfactants and co-surfactants, and co-solvents. Dilution of these formulations with gastrointestinal fluids results in the formation of a stable microemulsion; the drug stays in solution and precipitation does not occur. Several new drugs formulated in this way have been commercialized.

Other strategies that have been applied to optimize formulations beyond solubility enhancement include the limitation of serum peak concentrations, thus reducing the Cmax/Cmin ratio. To achieve this, Catalent has developed semi-solid formulations combining solubility-enhancement properties with a modulated release rate. The technology upon which these formulations are based enables the encapsulation of various LBDDSs at higher temperatures.

Catalent utilizes solubility prediction software that can speed up and narrow down excipient selection for softgel formulations when working with little, or even no API, and solubility and excipient screening for 30+ formulation vehicles can be achieved utilizing high-throughput techniques requiring as little as 1 to 2 grams of drug substance. In addition, Catalent’s in-house encapsulation tooling design and fabrication expertise reduces API loss during manufacturing, and the use of commercial-scale equipment from first clinical batch manufacture expedites the drug product development pathway.

These methods use as little as one third of the typical amount of API to determine the most suitable solvent vehicle for dosage formulation. Solubility prediction software can be based on one of two models: a quantum chemistry approach in which the molecular structures of APIs and excipients are used in combination with a solubility database to give predicted solubility values; or a thermodynamic approach based on melting point, solubility, and heat of formation data of APIs and vapor-liquid equilibrium or liquid-liquid equilibrium data of excipients.

A typical high-throughput solubility screening approach, based on low quantities of API, comprises the selection of 15 to 30+ vehicles (different chemical classes and hydrophilic-lipophilic balance); sample preparation by dispensing of the API and vehicle in a 1:10 or other ratio with a sample size <1 gram and incubation/mixing (typically for 48 hours). Separation of undissolved API is achieved by centrifuging and/or filtration. The solution is analyzed by HPLC for API solubility and the residual solids assessed by polarized light microscopy and X-ray diffraction (XRPD). A generic gradient HPLC method is employed, excipient peaks being recorded at known retention times. The whole procedure can be completed within 1 week using 1 to 2 grams of API.

To demonstrate the versatility of its softgel solvent and excipient selection procedures, Catalent has performed a study in which the solubilities of three model compounds, indomethacin, posaconazole, and levothyroxine, (see Table 1 for their molecular properties) were experimentally tested in a basic set of seven solvents and softgel vehicles. These APIs were selected due to their having distinct chemical properties, thus broadening the scope of the study to be representative of the evaluation of a wide variety of compounds. Combined with specific chemical properties of the solvents, the solubility experiments provide specific information on the properties of the active ingredients, including polarity, hydrophilicity, and hydrophobicity. Using the molecular characteristics of the API and the test solvent panel, it is possible to extrapolate API solubility in a range of vehicles by applying an empirical non-random two-liquid segment activity coefficient (NRTLSAC) model, which is correlative and predictive, and which requires minimal further input data.

The use of NRTL-SAC and other activity models in predicting solubility of APIs in common solvents has been widely investigated. The model calculates activity coefficient based on: (1) entropy of mixing (compositional, combinatorial, non-specific) and; (2) segment-segment (specific) pair-wise interactions. Each molecule in the model is defined by four conceptual descriptors (±polarity, hydrophilic, hydrophobic).

As an empirical model, NRTL-SAC has several advantages over other solubility models: the approach does not rely on predefined functional group activity coefficients; it is correlative and predictive; and, minimally, requires only four experimental solubility data as an input. 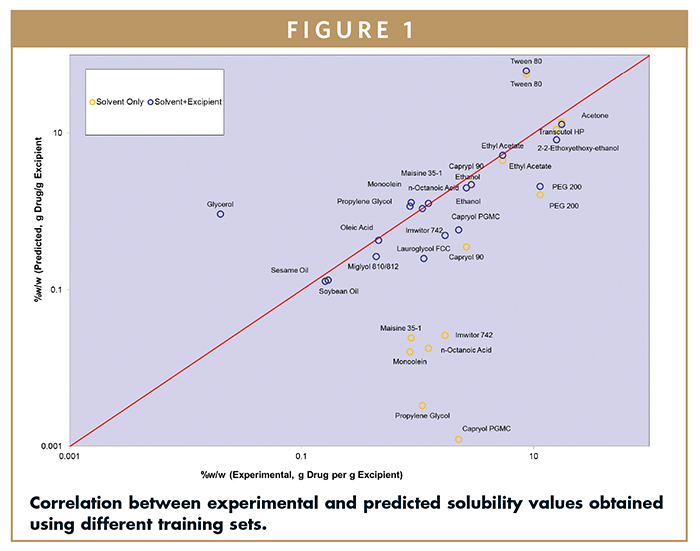 A training set involving four common solvents only, as well as training sets combining four solvents and three softgel vehicles, were initially designed to model the solubility behavior of indomethacin. Figure 1 shows the correlation of the results between experimental and predicted values in the two models for indomethacin. Overall, modeling involving solvents and softgel vehicles resulted in a better correlation. 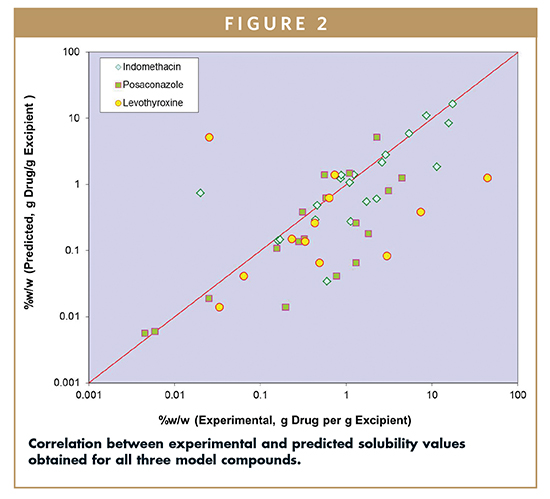 ​However, the rank-order of the vehicles in terms of solubility is good overall. Evaluation of the overall correlation of experimental versus predicted data sets suggests indomethacin > posaconazole > levothyroxine. Interestingly, this rank order qualitatively correlates with the physical stability of the compound during the solubility determination. The data generated by using this method allow for the selection of a solvent vehicle with a higher likelihood of success in creating a dosage form with adequate API solubility.

In the early drug development phase, dosage form development is often delayed due to insufficient quantities of API available. Softgel is a proven dosage form to improve drug bioavailable, compatible with a wide range of solvent systems. Catalent has successfully generated solubility data in various softgel solvents using the NRTLSAC model and as little as one-third of the typical amount of API is required. Thermodynamic solubility modeling can provide adequate correlation between experimental and predicted solubility data and can be useful in selecting vehicles for initial formulation design. This novel approach helps overcome challenges in labor and material requirements during traditional dosage formulation experiments, resulting in the opportunity to perform dosage form selection in the early phases of drug development. 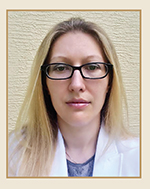 Irena McGuffy is a Director, Formulations Development at Catalent Pharma Solutions, and leads formulation development teams in Somerset, NJ, and St, Petersburg, FL, that are responsible for preclinical and clinical lipid-based formulation and softgel product development for NCEs. Other areas of expertise include generic product development, process scale-up and development, as well as clinical material manufacture. Her research efforts are currently focused on softgel film coating for the purpose of modified or targeted release and fixed dose combination product development. She has also served as a Portfolio Champion for Rx Softgel and a member of Catalent’s Softgel IP Review Board. Ms. McGuffy joined Catalent in 2007 and has over 13 years of experience in the pharmaceutical industry. Prior to Catalent, she spent 4 years with PLIVA and 1.5 years with Ranbaxy developing solid dosage forms, specifically generics, immediate-, gastroretentive, and controlled-release products, as well as other novel approaches to overcoming poor solubility and bioavailability. She is an active member of the AAPS and a steering committee member for the AAPS Lipid-Based Drug Delivery Systems Focus Group. She is a registered pharmacist and earned her BS in Pharmacy and her MS in Pharmaceutical Sciences from the University of Zagreb, Croatia, as well as her PharmD from University of Florida.