Drug delivery systems are generally designed to provide therapeutic amounts of active pharmaceutical ingredient to the proper site in the body over an acceptable period of time as quickly and safely as possible. Implantable drug delivery systems offer several advantages over conventional oral or parenteral dosage forms. First, implantable devices can allow site-specific drug administration where the drug is most needed. This may also allow for significantly lower systemic doses of drug that can minimize potential side effects. Second, implantable devices allow for sustained release of a therapeutic agent for months to years from a single device. The last and perhaps most important advantage is patient compliance, as the treatment regimen associated with an implantable device is generally simpler and less onerous than pills or injections and proceeds without patient intervention. Further, if the device is made of a durable resin, treatment can be discontinued if necessary or desired. Many of these drug delivery systems are polymer-based, with notable examples including subcutaneous implants based on ethylene vinyl acetate for treatment of opioid abuse, steroid-eluting PLGA ophthalmic implants for the treatment of macular edema, and silicone vaginal rings used in hormone replacement therapy.

While their rapid uptake in the market shows great versatility, existing approaches and materials have major limitations. In applications requiring delivery of a poorly bioavailable or sparingly soluble drug, the low surface area presented by a conventional polymer matrix can limit dissolution and drug release. At high drug loadings or when drugs are encapsulated that might contain interfering chemistries, the polymer matrix can be disrupted, leading to a loss of mechanical integrity. Finally, in many cases, the mechanical shear or temperature associated with typical polymer processing conditions can have a negative effect on sensitive drugs if they are incorporated prior to molding or extrusion of the implant.

These issues are especially acute when the delivery of large-molecule therapeutic agents, such as proteins, antibodies, and nucleic acids, are desired. For conventional devices, biologically relevant large molecules (molecular weight larger than 1 kDa) often have minimal solubility in the polymer matrix and extremely slow diffusion. As a result, release is slow or practically non-existent. Further, for many biomolecules, even modest process temperatures greatly increase the likelihood of degrading peptides or denaturing proteins. The ability to controllably release high concentrations of macromolecules over an extended period of time from a mild, manufacturable system is a “holy grail” in controlled release.

THE PROMISE OF POROUS SILICONES

Silicone is well-established as an implantable device material for controlled delivery of a wide range of drugs due to its biocompatibility, chemical inertness, capacity for controlled release, and amenability to formation into a range of geometries by such techniques as molding and extrusion. In contrast to thermoplastics, such processing is often possible at relatively low temperatures (eg, 100°C or less). Since many modern silicone formulations are viscous fluids at room temperature, incorporation of actives ahead of molding can be achieved with minimal heat load and shear compared to extrusion and forming approaches used for thermoplastics. Following introduction into the body drug dissolves in the matrix, diffuses to the surface, and into the fluid surrounding the implantation site. By appropriate selection of formulation “handles,” such as material composition, drug formulation, device geometry, drug load, and/or incorporation of rate-limiting or enhancing excipients, silicone devices can be fashioned in such a way as to gradually and predictably release drugs over extended time periods.

In contrast to conventional monoliths, the use of microporous carriers in drug delivery has been explored in various osmotic drug delivery systems with promising results. By introducing pores into the silicone system, the existing approaches to control drug release can be expanded to address liquid penetration into and subsequent elution from porous materials. Appropriate formulation and processing of the material can control the flow behavior of the fluid into the matrix itself, rather than allowing access to only the outer surface of the device. This can significantly impact the dissolution kinetics of the drug compared to existing approaches. In addition to existing methods for controlling release properties, the formulator can also control such properties of the porous implant as pore size, tortuosity, percolation, and wettability.

In contrast to monoliths, when a porous hydrophobic polymeric drug delivery system is placed in contact with the appropriate dissolution medium, release of drug into the medium is accompanied by swelling of pores and drug dissolution in the water-filled pores or from surface and by diffusion through the fluid-filled network. Depending on the interplay between these factors, drug release from a porous carrier may be complete within 10 minutes or be incomplete after several hours or days.

ProMed has developed several means of incorporating APIs into porous, high surface area silicone foams. This novel approach allows incorporation of much higher loads of previously problematic drugs, including low-solubility and large-molecule APIs, control over their release, and potential enhancements to drug bioavailability while using equipment and procedures widely used for silicone molding and processing of pharmaceutical dosage forms at commercial scales.

Silbione® RT foams (Bluestar Silicones) are biocompatible two-component low-viscosity materials that combine low density with excellent mechanical properties. Once part A and part B are mixed, the silicone elastomers crosslink via a polyaddition reaction, and hydrogen gas is evolved to promote void formation. A key advantage of Silbione foams is their ability to cure at low temperatures, typically between room temperature and 60°C over several minutes, which minimizes risk of API degradation. By utilizing a chemistry capable of generating a pore-forming gas instead of foaming agents that may not completely volatilize during the curing process, it is possible to create highly biocompatible porous implants that can be loaded with very high drug doses while not substantially compromising mechanical integrity and avoiding medically undesirable byproducts.

ProMed has identified and optimized critical processing parameters that impact the number, size, and shape of these voids as well as their interconnectedness. This understanding enables control of overall density, drug loading, and drug release by diffusion through both pores and the polymer matrix. Figure 1 shows the results of a two-factor design of experiments study used to understand the impact of key processing parameters on the foam microstructure. For a particular molding cavity geometry, the most important factors affecting pore size and connectivity were found to be molding temperature and shot size. 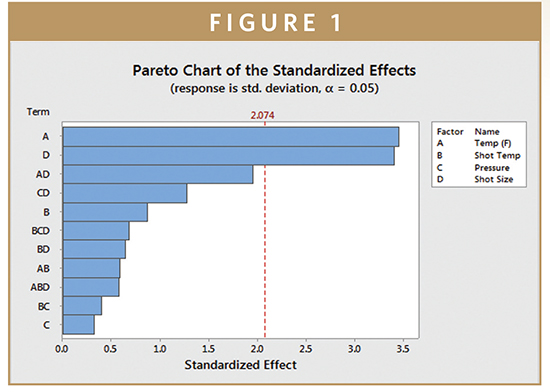 Figure 2 compares optical cross sections of two foams with similar average density but cured at lower and higher mold temperatures. At higher temperature, the cure time is reduced and pore size is modified as the silicone rapidly “sets” before the pores can combine with adjacent voids. Conversely, a smaller amount of silicone uniformly distributed through a fixed volume must effectively incorporate a higher void volume, resulting in a foam construct with lower average density. Figure 3 shows two representative lower and higher density foams cured at the same temperature.

USE AS A DRUG DELIVERY MATERIAL

Two important factors contributing to release of a drug form a porous content are the rate of water permeation into the matrix and the water solubility of the drug itself. To explore these effects in porous silicone, a series of experiments were performed using several model compounds including Rhodamine B (hydrophilic small molecule LogP = 1.95, 479 g/mol), Ibuprofen (hydrophobic small molecule, LogP = 3.97, 206 g/mol) and Bovine serum albumin (BSA, large molecule 66.5 kg/mol).

Silicone intravaginal rings (IVRs) have been commercialized for contraception and hormone replacement therapy and are in development for prevention of HIV and the treatment of endometriosis. ProMed has significant experience developing IVRs. Here, one such geometry was used as a model device architecture. In an effort to compare the performance of fully dense IVRs with foam constructs, a 30-durometer medical-grade liquid silicone rubber (LSR) was premixed with Rhodamine B. Rings were molded via injection molding and weighed a day after molding to ensure cure and off-gassing was complete. Each ring had approximately 1.5 g of Rhodamine B and weighed approximately 10 g. For the foam rings, the rhodamine B was mixed into the B component of the two-part foam system and made using a similar transfer press procedure. Dimensions and drug loading were similar between foamed and unfoamed systems. Rings were then suspended in 1 L of deionized water. A small weight was attached to the bottom of each ring to keep it submerged. The rings were maintained at room temperature and stirred at 100 RPM. Samples for quantitation of elution were taken periodically, and concentration was determined using UV-VIS Spectrometry. Figure 4 shows a photo sequence of rhodamine diffusing from a foam ring in a simple petri dish over several days. 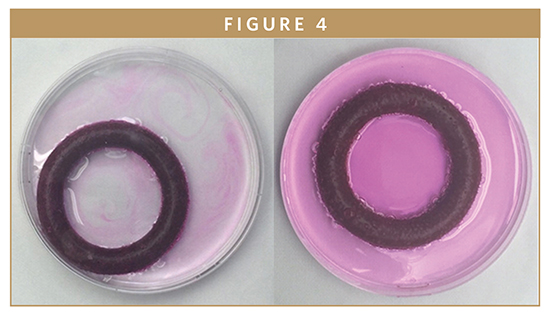 The high solubility of rhodamine is evidenced when the in vitro release of the fully dense and foam silicone IVRs are compared (Figure 5). The rates are nearly identical suggesting that porosity is a secondary factor in determining the release when diffusion and dissolution into surrounding media are not rate-controlling steps. 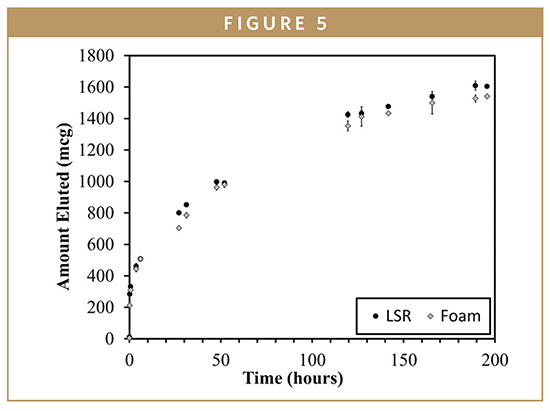 The release behavior, however, is quite different for the two materials when a more hydrophobic small molecule is utilized. Figure 6 compares the release of Ibuprofen in silicone foams with two different densities and the same percentage drug loading. Here, the effect of water ingress on drug release is much more apparent. A greater number of pores, or larger pores present with lower density foams, allow for more surface area for water to contact the drug. Incorporation of a dissolution enhancer, such as methyl cellulose, can further increase water uptake, pore interconnectedness, and the subsequent release rate of these more hydrophobic drugs. 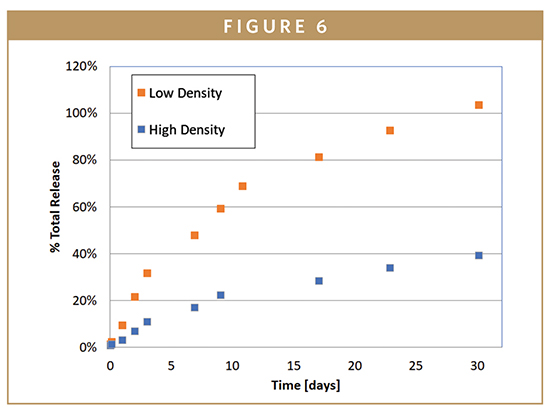 Finally, release of a model protein, bovine serum albumin (BSA) was evaluated. Bovine serum albumin powder was mixed into silicone Part A and Part B at 0-25 wt%. A controlled quantity of both silicone parts was combined in a 1:1 ratio through a static mixer into a heated mold and cured. Additional samples were prepared by mixing BSA into liquid silicone rubber without use of a foaming agent and by soaking a preformed ring in a BSA solution followed by freeze drying. Release studies were run in phosphate acetate buffer and BSA elution was tracked by UVVisible spectrophotometry. 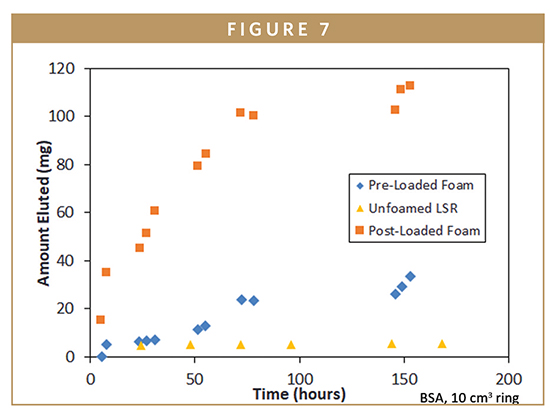 Foamed silicone is capable of sustained, controlled elution of hydrophobic small molecule and large macromolecular payloads. Drug release was demonstrated using a novel tunable, industrially scalable IVR platform with release kinetics similar to that of reservoir-type design by a simple matrix-type manufacturing route. By employing simple changes to processing parameters, hydration and release kinetics can be adjusted. By making linear, sustained release possible in an easily manufacturable construct, this approach could potentially expand the scope of drug delivery to include a rapidly emerging range of macromolecular therapeutics.

Special thanks to Krutika Jain, Surabhi Talele, and Logan Grace for their contributions to sample preparation and analysis. 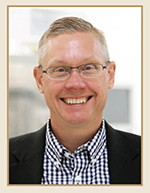 Dr. James Arps is a Program Director at ProMed Pharma. He has over 15 years of experience managing product development and commercialization of medical devices, advanced coatings, and drug delivery technology. He has worked with industry and academic partners, guiding products through all stages of development from conceptualization through to commercial release. At ProMed Pharma, he oversees program development activities for polymer-based drug-releasing implants and combination device components. He earned his PhD in Applied Physics from Vanderbilt University and his MS in Management of Technology from the University of Texas-San Antonio. 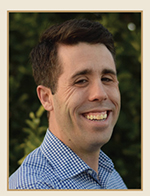 Dr. Matt Petersen
is a Principal Scientist at ProMed Pharma, where he is responsible for technical leadership in formulation and product development for drug-device combination products. His interests in controlled and sustained release include applications in women’s health, ophthalmology, and prevention of HIV transmission using both established and emerging polymeric delivery systems. Dr. Petersen earned his PhD in Materials Science and Engineering from the University of Minnesota, Twin Cities on the subject of microstructured polymeric drug delivery vehicles for targeted drug delivery.