GRANFILLER-D includes four excipients listed in the USP, EP, and JP: mannitol, crospovidone, carmellose, and microcrystalline cellulose. These are co-processed using a unique water-based granulation method. Two grades of GRANFILLER-D with different median particle sizes are supplied: GNF-D211 has particles of 100 µm, and GNF-D215 has particles of 140 µm (Table 1). In addition, GRANFILLER-D (grade GNF-D211) has a US Master File and is used in marketed drug products mainly in Japan.

To make ODTs with GRANFILLER-D, one or more APIs, flavoring agent, sweetener, and a lubricant are blended and then compressed on a standard tablet press. The ODTs show satisfactory formability and rapid disintegration without addition of binders or disintegrants. This co-processed excipient significantly simplifies the formulation and manufacturing process of ODTs. 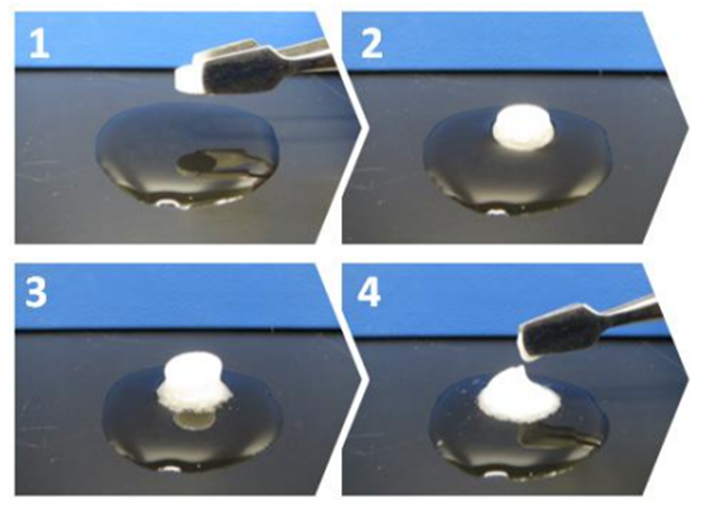 GRANFILLER-D allows the application of high compression forces. Even when compressed to a higher hardness range, tablets made using GRANFILLER-D maintain their short disintegration times. This superior hardness-disintegration property enables formulators to incorporate a wider variety of APIs into ODTs (Figure 2). 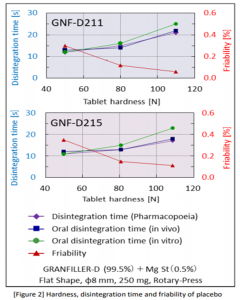 GRANFILLER-D also accepts high content of API while maintaining high hardness and rapid disintegration. Due to this high dosing capacity, GRANFILLER-D also provides the flexibility to formulate controlled-release tablets, mask bitter tastes, and stabilize APIs. Even if an API accounts for 30 to 70% of a tablet weight, trial ODTs made with GRANFILLER-D exhibit satisfactory hardness (greater than 40 to 50 N) and rapid disintegration (less than 20 to 30 seconds). This result suggests that the particles of GRANFILLER-D function as water absorption routes regardless of tablet porosity and the amount of API. Even when the ODTs contained poorly water-soluble APIs (eg, ethenzamide and acetaminophen), they exhibited excellent hardness-disintegration properties at a content of 50% to 70% (Figure 3). 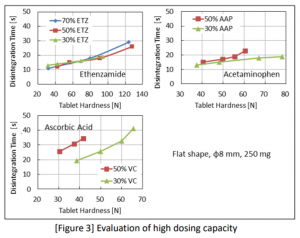 The particles of many direct-compression excipients are spherical or nearly spherical and therefore have very high flowability. GRANFILLER-D particles, however, are non-spherical and irregularly shaped; the angle of repose is about 40 degrees , which exceeds the 30 degrees that is typical of ODT excipients whose particles are more spherical. GRANFILLER-D nonetheless has sufficient dynamic flowability for practical use and can be tabletted on presses equipped with force-fed and open feeders. In one case, a 38-station tablet press equipped with a force-fed feeder was used. It showed stable compression force, with a coefficient of variation (CV) of 3.6% when tableting GNF-D211 and a CV of 3.5% when GNF-D215 was used. The tablet weight CVs were 0.44% for GNF-D211 and 0.63% for GNF-D215. The values held steady even at a press speed of 100 rpm.

It is well known that blending improves when the sizes of the particles in the excipient and API are equivalent. Yet GRANFILLER-D blends well with APIs whose particles are smaller than those of the excipient due to their non-spherical, irregular shape (Figure 4). This was demonstrated by testing the content uniformity of ODTs containing just 1% of ibuprofen. Four samples of ibuprofen, each with a different median particle diameter (135, 34, 14, and 7 µm) were blended with GRANFILLER-D GNF-D215. The CVs of the API content in the resulting ODTs were 2.4%, 2.8%, 2.0%, and 3.3%, respectively.

Disclaimer
Daicel has paid special attention to ensure that the information included on this document will be updated and accurate. However, Daicel does not guarantee or accept any responsibility for the appropriateness and accuracy of the content of this document. Additionally, acknowledge that the content of this document may be changed, or suspended, or the operation thereof ceased, without prior notice. Regardless of reason, Daicel does not assume responsibility for any damages arising from changes of the data on this document. (7/2019)