DRUG DELIVERY – HEPtune: A Process of Conjugating a Naturally Occurring Sugar Molecule, Heparosan, to a Drug for Enhanced Drug Delivery

Caisson Biotech, LLC has developed the HEPtune(TM) system for creation of novel heparosan-based conjugates to enhance the therapeutic properties of pharmaceuticals by increasing product half-life, reducing immunogenicity, and increasing stability. The new vehicle is composed of heparosan, a natural polysaccharide with the structure [-4- GlcNAc-a1,4-GlcUA-ÃŸ1-]n related to heparin, one of the most widely used drugs in the Pharmacopeia, but does not display “heparin” activity.1 Heparosan is hypothesized to be biocompatible in the human body because it is a natural precursor in the heparin biosynthetic pathway and stretches of heparosan exist in human heparan sulfate chains. Certain pathogenic bacteria even exploit the “self “ nature of heparosan by using a heparosan coating to evade the immune system during infection, thus, offering the potential for reduced immunogenicity of the drug conjugate.2 Caisson’s HEPtune, the attachment of a heparosan vehicle to a drug cargo, has many potentially superior attributes over other vehicles. In general, heparosan-modification attributes include: the ease of generating a larger size range of monodisperse polymers, high water solubility, biocompatibility of degradation products, easy removal of polymer vehicle for analysis of cargo purity and activity, lack of accumulation in tissues, reduced immunogenicity, and new intellectual property.

OVERVIEW OF OTHER POLYMER VEHICLES VERSUS HEPAROSAN

The covalent modification of drugs with vehicles to enhance performance is a wellknown strategy. PEGylation, a technology developed in the 1970-1980s, is a FDAapproved process adding poly[ethylene glycol] (PEG) to a therapeutic cargo including proteins and liposomes. PEG-drug conjugates show prolonged residence in the body, decreased degradation by metabolic enzymes, and reduced immunogenicity. However, while PEG is presently commercially viable, its artificial nature presents increasingly serious drawbacks especially for pharmaceuticals used at high doses and/or for long duration treatments.3-8

The liver detoxification system can create a variety of reactive PEG metabolites that are cytotoxic.5-7 In contrast, Caisson’s heparosan system, HEPtune, uses natural heparosan polymers, which are degraded into normal sugars and recycled, and thus should possess substantially lower toxicity. Another biocompatibility issue is that PEG, in certain formulations including liposomes and some enzymes, can induce anti-PEG antibodies in some patients. Anti-PEG antibodies may also be triggered by widespread use of PEG in many consumer products (eg, toothpaste, laxatives, vitamin pills). In 1984, it was reported that in naÃ¯ve persons, anti-PEG antibodies were detected in ~0.2% of the samples, but as of 2001, stunningly, ~22% of healthy blood donor (n=350) samples had anti-PEG IgM or IgG.9,10. Obviously, anti-PEG antibodies can limit the usefulness of PEG therapeutics.4,8,10,11 For example, some leukemia patients no longer respond to PEGasparaginase (Oncaspar®) medication due to anti-PEG antibody levels.10 Similarly, anti- PEG was found in gout patients treated with PEG-uricase; these persons were refractory to therapy as the drug was cleared rapidly.12 On the other hand, heparosan as a “self “ molecule, should not be immunogenic. 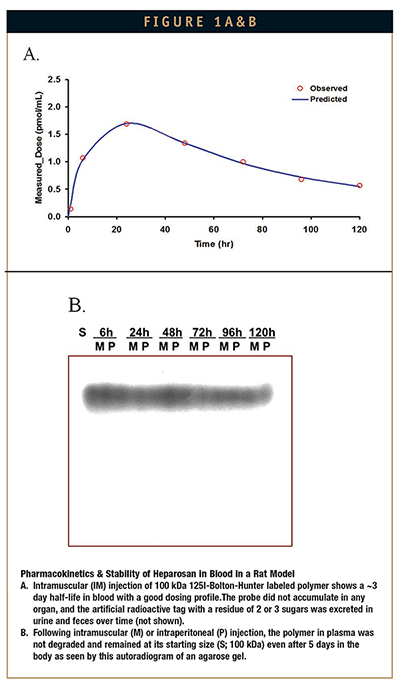 In addition, PEG can activate the complement system, which may explain why PEG triggers anaphylactic shock and/or other allergic reactions in some patients.13 A heparosan polymer, as a naturally occurring “self “ polymer in humans, was well tolerated in a recent Caisson rat study.1

Two other polysaccharides, poly[sialic acid] (PSA) and hydroxyethyl modified starch (HES), have been proposed to be “PEG-substitutes.”14,15 PSA has a polydisperse size distribution, will form aggregates unless modified, and sometimes triggers the immune system. HES is an approved plasma extender, but it has heterogeneous size and modification levels, breaks down in the blood (thus potentially complicating pharmacokinetics), and can trigger corn allergies. PSA is also not available in sizes >100 kDa. HES >60 kDa accumulates in tissues and is difficult to remove from cargo during quality testing, thus a similar case to the PEG polymer.16 On the other hand, Caisson can synthesize 800 kDa heparosan, providing longer half-life potential, and it does not accumulate in tissues. Additionally, a gentle enzymatic method can be utilized to remove heparosan chains from the drug in vitro to facilitate analyses.

Without O-sulfation on the polymer chain, heparosan is resistant to cleavage by the mammalian heparanase that typically digests heparin.17 Also, heparosan is not bound by Hyaluronan Receptor for Endocytosis (HARE), a liver receptor that normally clears hyaluronan and heparin very efficiently from the bloodstream.18 Caisson thus hypothesized that heparosan would be very stable and would persist in the extracellular spaces of the body in an intact fashion. Caisson pharmacokinetics studies in rats showed that indeed heparosan had a long plasma half-life and is stable in the bloodstream (Figure 1A & 1B).

If heparosan is internalized into cells (eg, via pinocytosis, etc) and transported to lysosomes, it should be degraded by resident glucuronidase and hexosaminidase enzymes, similar to other glycosaminoglycans, such as heparin or hyaluronan; Caisson’s preliminary data in rats (not shown) verify this prediction.19 A key advantage for therapeutic modifications with heparosan is that its degradation products, GlcNAc and GlcUA, are normal monosaccharides, which are nontoxic (unlike PEG metabolites) and can be recycled by cells.

Some patients react immunologically to PEG following exposure to certain formulations.4,8,20 Because heparosan is a naturally occurring sugar polymer in mammals, Caisson predicts that it will not be immunogenic. Generally speaking, molecules that normally exist in the body are regarded as “self “ and therefore not subjected to attack by antibodies, phagocytes, or the complement system. This fact is employed by certain pathogenic bacteria that camouflage themselves with heparosan molecules; Pasteurella multocida Type D and Escherichia coli K5 both produce heparosan coatings that hide them from many host defenses.2 Only a few monoclonal antibodies to the heparosan polymer have ever been reported; the rare anti-heparosan-producing clones were identified after immunizing with extremely antigenic bacterial membranes or key-hole limpet hemocyanin conjugates.21,22

The normal roles of heparin/heparan sulfate in vertebrates include inhibiting blood coagulation. Caisson has verified that without O-sulfation on the polymer, heparosan does not affect clotting of human plasma even when used at 15,000-fold higher levels than heparin on a mass basis.

Caisson tested the effects of high doses of heparosan (100 mg/kg body weight) in healthy rats via intravenous injection (once on days 1 and 8); this translates to ~100-fold to 2,000-fold higher levels than its expected use in humans. There were no adverse effects as measured by blood or urine chemistry, hematology, or histology.

Caisson, and its affiliate companies, have cloned and patented a bacterial polymerizing enzyme called heparosan synthase, PmHS1. This catalyst is harnessed for the chemoenzymatic synthesis of sugar polymers with a very narrow size distribution, termed “monodisperse.”23 The use of an acceptor in PmHS1-catalyzed reactions synchronizes polymerization, and the concentration of acceptor tightly controls the size of the heparosan product (Figure 2; heparosan of different sizes run as tight bands). Depending on the size, the polydispersity ranges from 1.01 to 1.18 (1=ideal). This patented method is also amenable to defined and reproducible chemical activation of heparosan to facilitate coupling of a protein cargo.

Conjugation of Heparosan to Protein Therapeutics with Retention of Biological Activity

Caisson has coupled heparosan to amine, carbonyl, or sulfhydryl groups of a variety of biologics, including cytokines, hormones, and antibodies (not shown). These heparosan-modified drugs are either more potent or have equal biological potency when compared to similarly sized PEGylated versions.

Heparosan is a stealthy molecule well suited for use as a drug delivery vehicle due to its natural origin and properties in the body. Therefore, heparosan-modified therapeutics may offer improved pharmacokinetics, drug performance properties, as well as new options for treatment and hope for patients, especially those undergoing life-long treatments. Furthermore, defined heparosan polymers should facilitate quality control and FDA approval. 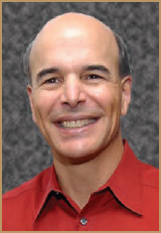 Dr. Paul L. DeAngelis is Chief Scientist of Caisson Biotech, LLC, a biopharmaceutical company with a patented heparosan-based drug delivery technology. He has been a glycobiology researcher since 1981 in the fields of carbohydrate/protein interaction and polysaccharide biosynthesis using the experimental tools of molecular biology, enzyme biochemistry, and carbohydrate analysis. Dr. DeAngelis’ laboratory discovered several new hyaluronan synthases, the first chondroitin synthase and two novel distinct heparosan synthases. His overall basic science goal is to understand the fundamental mechanisms of naturally occurring enzymes. As a result of this work, sugar synthesis was vastly improved with respect to speed, controllability, and purity. Biotechnological applications include the design of novel hybrid polysaccharide molecules for medical applications; the formation of biocompatible coatings and surfaces; the synthesis of defined oligosaccharides that have potential for use as anticancer agents, anticoagulants, or immune system stimulators; and the synthesis of sugar-based drug delivery systems. Dr. DeAngelis is a Presidential Professor in the Department of Biochemistry & Molecular Biology at the University of Oklahoma Health Sciences Center, having previously received a BA from Harvard and his PhD From the University of California, Irvine in 1990.