EXCIPIENT UPDATE – Addressing Challenges With Low-Solubility Compounds: The Importance of Functional Excipients in the Formulation of Amorphous Dispersions


Because more than half of the compounds in early development are considered poorly soluble, improving oral bioavailability represents a significant challenge to the pharmaceutical industry. Bend Research, a problemsolving, drug-development, and manufacturing company, is well-known for its spray-dried amorphous dispersion technology, which is recognized as a reliable solution to this challenge due to its proven performance, long-term stability, and excellent manufacturability.

Excipient selection is critical to optimizing the performance of these amorphous dispersions. Because excipients play a “functional” role, they must be chosen based on scientific rationale to ensure they meet formulation and process criteria to achieve the desired performance, stability, and manufacturability.

In a previous interview in this publication (May 2012), I described the company’s background and problemsolving approach to drug delivery challenges faced by the pharmaceutical industry. This interview was followed by an article (July/August 2012) describing how science and technology are used to solve bioavailability challenges. In this article, the importance of functional excipients in the performance of amorphous dispersions will be discussed. A case study is presented on the history and solubilization performance of hypromellose acetate succinate (HPMCAS) – a particularly effective functional excipient in amorphous dispersions.

THE IMPORTANCE OF FUNCTIONAL EXCIPIENTS

Typically, excipients have been considered “inert” ingredients in pharmaceutical formulations. However, with the advent of advanced drug delivery technologies – whether solubilization, controlled-release, or abuse resistant approaches – excipients, in some cases, become truly functional in that their composition and function are critical to the performance of the formulation and the delivery of API. This is especially true in solubilization approaches, in which the excipients have dual functionality: to promote rapid dissolution of drug in intestinal medium and to prevent the API from subsequently precipitating.

One excipient that has been demonstrated to have superior performance in filling these functions fo solubilization of poorly soluble APIs is HPMCAS. Below, we provide background on this polymer, its development as a dispersion polymer, its safety, and present a Quality-By-Design (QbD) case study on the selection of HPMCAS in collaboration with Dow-Wolff Cellulosics. 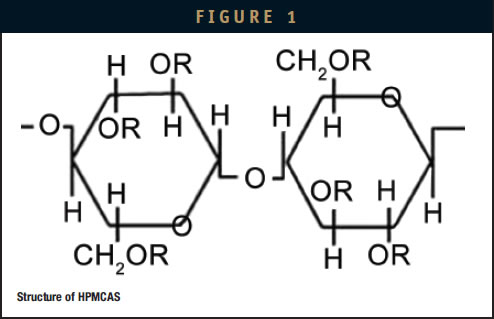 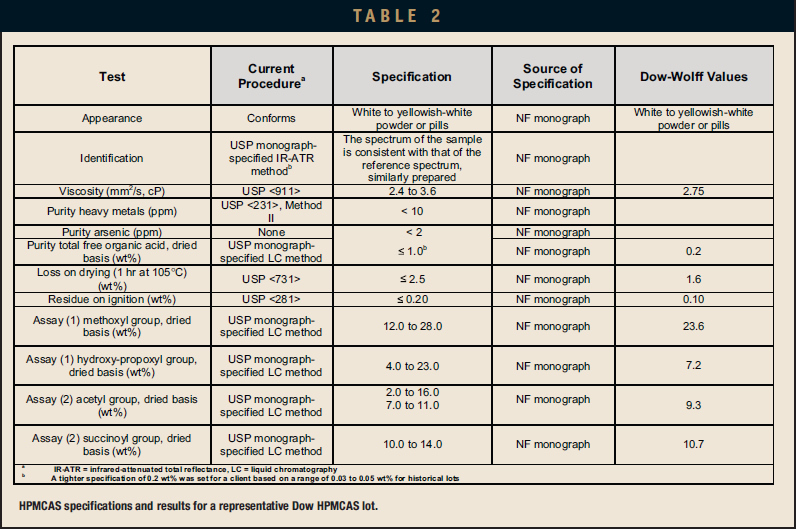 HPMCAS was the product of a research program initiated by Shin-Etsu Chemical Co., Ltd., in 1977 to develop a new enteric coating material. The polymer was approved for use in Japan in 1985 and was listed in Japanese Pharmaceutical Excipients in 1988. Despite its technical success as an enteric polymer, commercial adoption of the polymer was slow, and HPMCAS was not included in an FDA-approved product until 2000. The monograph for this material was included in the US Pharmacopeia in 2003. The structure for HPMCAS is shown in Figure 1, and the degrees of methoxoyl, hydroxypropyl, acetyl, and succinoyl substitution for the three available subtypes (L, M, and H) are shown in Table 1. 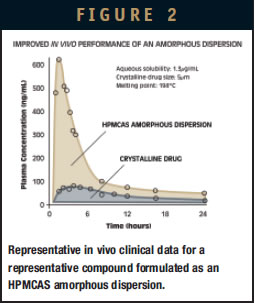 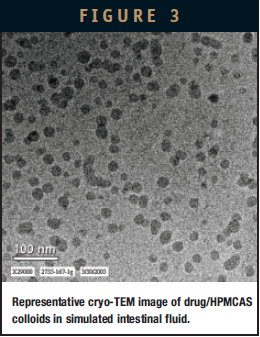 DEVELOPMENT OF HPMCAS AS A DISPERSION POLYMER

Figure 2, which shows the clinical in vivo performance of a representative compound formulated as an HPMCAS amorphous dispersion and as crystalline drug.

To date, more than 600 compounds have been formulated as amorphous dispersions at Bend Research. More than 450 have been formulated as HPMCAS dispersions, with more than 90% showing enhanced absorption relative to crystalline forms. During these development projects, Bend Research has developed scientifically based formulation principles and methodology that allow both drug product intermediate and solid dosage forms to be robustly formulated. 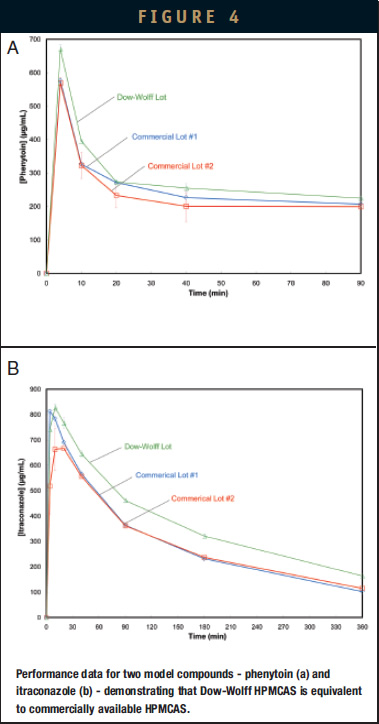 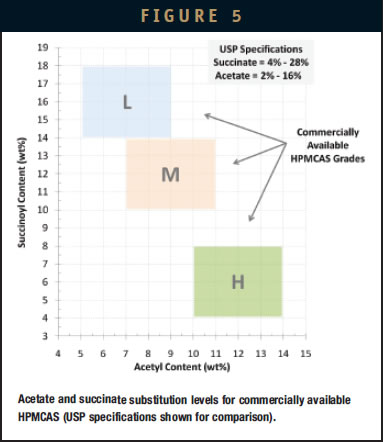 The ability of HPMCAS to form drug/polymer colloids that support enhanced dissolved-drug levels in the intestine is often critical to formulation performance. It is essential to formulate both SDD and the solid dosage form for most formulations, such that the primary SDD particles can source dissolved drug and colloidal polymer. These colloids, which are shown in the representative cryo-transmission electron micrography (TEM) image in Figure 3, promote rapid dissolution of the drug into solution and serve as a stabilizing reservoir for amorphous drug.

Additional critical features of HPMCAS include its high glasstransition temperature (Tg) and low water absorption, which minimizes plasticization of the dispersion at high humidities. Both of these attributes contribute to the polymer’s ability to form physically stable dispersions in the solid state. 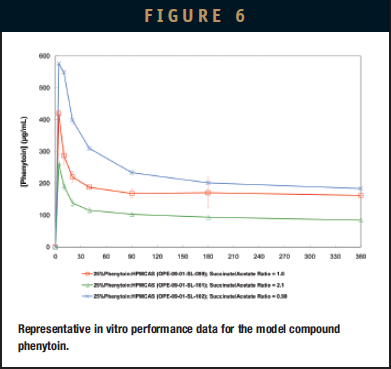 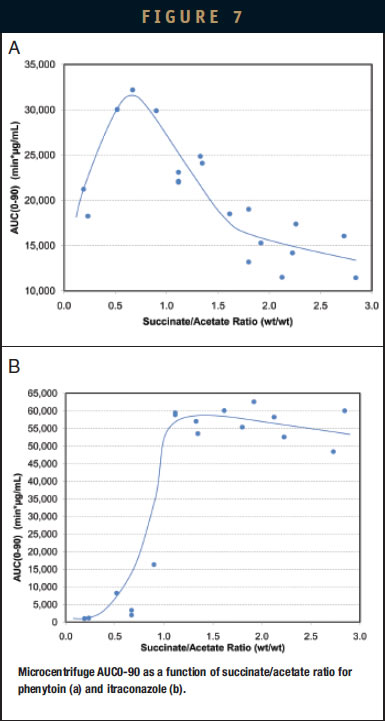 Despite HPMCAS’s approved status for its use in pharmaceutical coating applications during its early evaluations as a dispersion polymer, the Pfizer/Bend Research effort required considerable additional safety and characterization work because the amounts of polymer used in the amorphous dispersions were significantly higher than those previously used in coating applications.

Based on these studies, HPMCAS is an excipient with a demonstrated nonclinical safety record that supports its chronic use orally at high doses in human subjects. As with other cellulosic excipients, minimal absorption is observed when HPMCAS is dosed orally, enabling a high margin of safety.

Data from extensive non-clinical toxicology studies conducted by Pfizer have been compiled and submitted in a Type V Drug Master File (DMF) to the FDA. This comprehensive safety information for HPMCAS has been referenced to support oral drug-product formulations in early and advanced-phase clinical trials. The use of HPMCAS in clinical trials and commercial products continues to support its safety. The results of these studies are summarized below.

“¢ All three current commercial subtypes of HPMCAS have equivalent safety profiles when administered orally to rats, dogs, and monkeys.

“¢ Overall acute and chronic preclinical safety assessments of orally administered HPMCAS did not identify any target organ toxicity even at the highest deliverable dose by gavage.

“¢ No carcinogenicity was observed in 2-year carcinogenicity studies in rats and mice. Pfizer, Bend Research, and their licensees retain an exclusive right to reference this Type V DMF.

In 2010, Bend Research and Dow-Wolff Cellulosics began a collaboration focused on solubilization polymers. While one goal of the work was to provide an alternate source of HPMCAS, a secondary goal was to explore a broader chemistry composition space than what is available from commercial materials.

In work to provide an alternate HPMCAS source, as the data in Table 2 show, the HPMCAS produced by Dow-Wolff is within the National Formulary (NF) monograph specifications for the M polymer subtype.

In addition to meeting compositional requirements, Figure 4 shows the in vitro performance for two model compounds using Dow-Wolff HPMCAS compared to the commercially available material. As these data demonstrate, the HPMCAS produced in the Dow-Wolff market development facility has comparable performance to that of commercially available material.

The second goal of this work was to develop materials that expand the compositional space that is not addressed using the currently available commercial grades of HPMCAS. Figure 5 shows the succinoyl and acetyl chemistry spaces covered by the commercially available grades of polymers and the USP-defined chemistry space. As this figure clearly shows, there is considerable space to explore beyond what is covered by th commercial grades of HPMCAS.

To understand the potential of the HPMCAS made by Bend Research and Dow-Wolff in different chemical spaces, the impact on the in vitro solution performance of two model compounds – phenytoin and itraconazole – was tested as a function of acetate and succinate content across the USP chemical space. Obviously, other compositional changes, such as methoxyl and propoxyl, could also be investigated. Representative in vitro microcentrifuge dissolution data for phenytoin is shown in Figure 6 as a function of succinate/acetate ratio.

These and other data are plotted, showing the area under the curve (AUC) as a function of the succinate/acetate ratio in Figure 7a and 7b. As these data demonstrate, the average substitution in the HPMCAS has a considerable impact on in vitro performance. In addition, it is clear that the optimum HPMCAS composition for solubilization depends strongly on the API, with the maximum dissolution performance observed around succinate/acetate of 0.5 for phenytoin and above 1.0 for itraconazole.These performance data demonstrate that the science surrounding dispersion polymers and amorphous dispersions can be used to design polymer compositions that are within the compendial space, but lead to optimized performance.

HPMCAS has proven to be a superior excipient for use in amorphous dispersions for more than 15 years.

Based on the initial data from Bend Research and Dow-Wolff Cellulosics’ HPMCAS QbD studies, it is clear that much more can be learned about the structure-property and structure-performance correlations of this class of polymers and how this information  can be used to optimize performance for different classes of API. Our collaboration with Dow-Wolff continues to push the boundaries of this and other chemistry spaces. 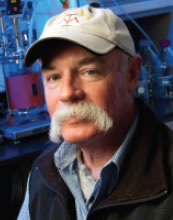 Dr. Rod Ray is Chief Executive Officer and Chairman of the Board at Bend Research, where he has worked since 1983. During his time at Bend Research, Dr. Ray has held numerous positions specializing in the development and commercialization of a wide range of products. He has been instrumental in directing the management of large-scale programs to advance pharmaceutical compounds through the development process to commercialization, serving as the primary management contact for client companies. In addition to his expertise in advancing pharmaceutical processes and products, Dr. Ray has extensive experience in commercializing diverse products for the electronics, energy, medical, agricultural, and space industries. He earned his BS in Chemical Engineering from Oregon State University, and his MS and PhD in Chemical Engineering from the University of Colorado – Boulder. He is a licensed Professional Engineer in Colorado and Oregon. Dr. Ray holds 21 US patents and has 41 scientific publications to his credit.