There is an interest in controlling and understanding the concentration of APIs and excipients on pharmaceutical powder surfaces for a host of reasons. Some of this interest is driven by decreasing particle size for aerosols or nanomedicine applications, in which the atoms in the near-surface make up a significant fraction of the total atoms as the size decreases into the sub-micron range. Roughly 5% of the atoms are present within the outer 10 nm of a 1-micrometer particle. This percentage rises to nearly 20% for a 0.25-micrometer particle (Figure 1).

In addition to concerns based purely on size, the outer surface of pharmaceutical particles wis often chemically quite different from the bulk. Processing can result in the segregation or coating of one component relative to others at the surface of a particle. This, in turn, affects a host of performance parameters, including solubility, dissolution rates, stability, flowability, agglomeration, and crystallinity.

X-ray photoelectron spectroscopy was developed in the 1950s and 60s due largely to the pioneering work of Kai Siegbahn at Uppsala University in Sweden.1 He was awarded the Nobel Prize in Physics in 1981 for his contributions. XPS has been used widely since the early 1970s, when the instruments became commercially available to study surface chemical phenomenon in catalysts, metals, surface modified polymers, nanomaterials, biomedical devices, and semiconductors.

In XPS, which is also known as Electron Spectroscopy for Chemical Analysis (ESCA), a photon ionizes an atom resulting in the ejection of a core electron. The kinetic energy, KE, of these photo-electrons is related to the x-ray energy, h?, by the photoelectric effect:

Where BE is the binding energy of the core electron. Because each element in the periodic table has a different electronic configuration, XPS can be used to identify what elements are present in a sample. The number of emitted photoelectrons is proportional the concentration of that element present within the sample by way of nearuniversal sensitivity factors, making the technique quantitative without standards. Most commercial instruments use soft x-ray sources with h? < 1500 eV, resulting in photoelectrons with kinetic energies in the 200- to 1400-eV range. Low-energy electrons travel only a very short distance through solids, making the technique inherently surface sensitive; virtually all the signal originates from the outer 5 to 10 nm of the sample. Somewhat analogous to NMR, XPS has the ability to determine the nearest neighbor chemical environment in many organic and inorganic materials by way of small changes (termed chemical shifts) in the energy of the photoelectrons.

These four attributes (surface sensitivity, element and chemical state specificity, and standardless quantification) combine to make XPS an extremely powerful tool for studying various surface chemical phenomena in the pharmaceutical and biotech industries. These include identification of surface contaminants and degradation products on APIs, understanding lubricant thickness and coverage, quantifying protein adsorption on surfaces, evaluating surface contamination of packaging and delivery components, and even identification of API co-crystals.2-5 The focus of this paper is quantification of APIs and excipients on engineered powder surfaces. 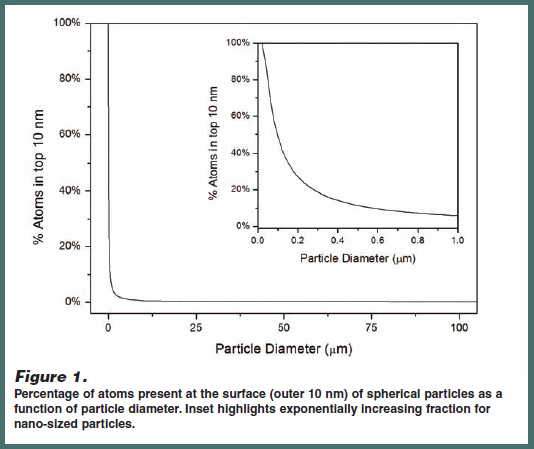 Materials & Methods: Solumer Technology, a proprietary drug delivery technology that consists of spray drying an API with a combination of amphiphilic and hydrophilic polymers, was used to prepare the drug product.6,7 This technology is characterized by modified thermal behavior exhibiting a depressed melting temperature and enthalpy of melting of the drug, spontaneous formation of colloidal dispersions upon reconstitution with aqueous media, and enhanced dissolution rate/solubility of the drug as well as the ability to achieve prolonged supersaturation in dissolution media. The API was indomethacin (25% w/w loading in the final formulation), which is a COX inhibitor with empirical formula, C19H16ClNO4. The amphiphilic polymer was Poloxamer 407, which is a triblock co-polymer of polyethylene glycol – polypropylene glycol – polyethylene glycol. The PEG blocks are 101 units long, and a PPG central block is 56 units long. The hydrophilic polymer was sodium carboxymethylcellulose (CMC).

The formulation was prepared by mixing the excipients with solubilized API using a combination of water and ethanol then spray drying with a Mini Spray Dryer B-290 (Buchi Labortechnik AG). Representative scanning electron micrograph acquired at 50X, 200X, and 5,000X are provided in Figures 2A-2C. Indomethacin is the fine needle-like material. The average particle size was 100 to 200 micrometers. The powder was gently packed into a sample cup, and the XPS analysis was performed using a 2-mm X 1 mm x-ray beam simultaneously sampling several dozen particles.

The photoelectron spectrum (Figure 3) shows distinct peaks for the elements expected in the sample (C, O, N, Cl, and Na) as well as minor amount of Si from an unknown source (XPS does not detect hydrogen). The inset shows the carbon highenergy resolution spectrum. Four different bands are detected in carbon spectrum. The lowest binding energy band (284.8 eV) is from -CH3 and carbon in the aromatic ring structure of indomethacin. The large peak at 286.3 eV is due to C-O, C-Cl, and C-N bonds present in the API and/or the excipients. The weak peak at ~287.7 eV is due to N-C = O, and the other weak peak at ~288.5 eV is due to COOH.

Quantification: By integrating the area under the peaks and applying relative sensitivity factors, the intensity can be converted into atom percent of elements. The composition for the aforementioned sample is included in the box inset in Figure 3. 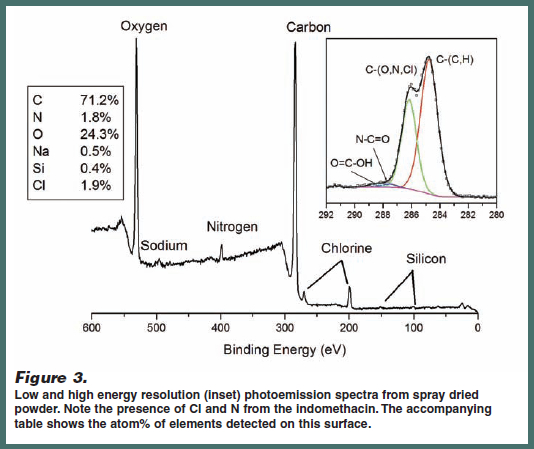 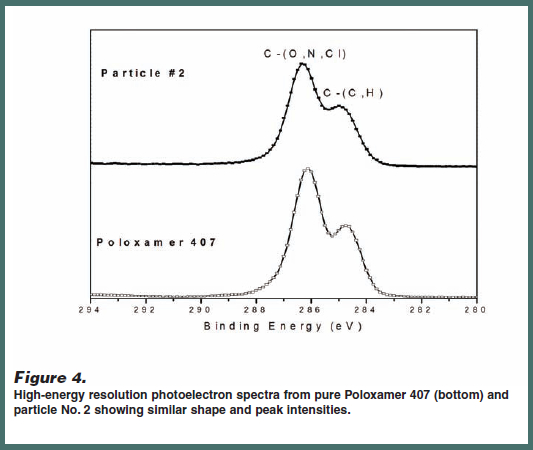 To convert the elemental composition of multi-component pharmaceutical sample to a more useful measure of the amount of the individual components, one needs a unique element or functional group for each component. For indomethacin, we may use nitrogen or chlorine, neither of which is present in the excipients. Sodium will serve as a tag for sodium carboxymethylcellulose. Poloxamer 407 contains no unique elements or functional groups. It will be quantified by difference. The general equation for converting the elemental concentration to mole percent is shown in Equation 2.

Where [XA]exp is the experimentally measured atom% of the unique element or functional group present in component A and [XA]8 is the atom% measured on the pure material. If pure materials are unavailable, an acceptable alternative is to derive [XA]8 from the empirical formula of the material in question.

For the sample in Figure 3, [N] exp was 1.8 atom% and compared with [N]8 = 4.0% expected for pure indomethacin. Thus, the atom fraction of indomethacin on the surface of this sample is 1.8/4.0 = 0.45 or 45%. A similar approach was done using Na to quantify the surface concentration of CMC. The pure sodium CMC (data not shown) sample was found to have 9.2 atom% Na. The low Na concentration on the powder confirms that there is ~5% CMC on the surface.

Knowing the chemical structure of the Poloxamer (PEG101-PPG56-PEG101), we can compare the residual (non-indomethacin and non-CMC) material with that expected for Poloxamer. Bulk Poloxamer 407 contains ~12 carbon atoms bonded to O (C-O) for every -CH3 due to the high PEG fraction. After accounting for the indomethacin contribution, the surface C-O/CH3 ratio of the residual material is close to 2.0. This large discrepancy could indicate that the residual is something other than Poloxamer. However, analysis of the pure Poloxamer 407 also reveals a carbon spectrum also with a C-O/CH3 ratio close to 2. This indicates that Poloxamer present on the surface of the particles has the more hydrophobic PPG block oriented to the outer surface and the hydrophilic PEG end groups buried below the surface. 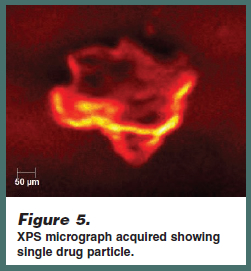 While not generally considered a microanalysis tool, modern XPS instruments can acquire data on areas as small as 10 micrometers. In this study, there was an interest in checking the homogeneity of the product. Figure 5 shows an x-ray-induced electron micrograph acquired in the XPS. The image is formed much like in a scanning electron microscope in which a focused electron beam is rastered across a sample surface while secondary electrons are collected. In this case, we rastered a ~5- micrometer x-ray beam across the surface while collecting secondary electrons. The image quality and resolution are not as good as in the SEM micrograph (Figure 2), but clearly permit identification and subsequent selection of an individual particle for analysis. In this example, microfocused XPS was done to assess the uniformity of the Indomethacin-Poloxamer distribution at five different ~150-micrometer agglomerates. The results are summarized in Figure 6. The drug surface concentration varied by more than 3X among the five particles analyzed. The average indomethacin concentration detected on the five particles (44%) agreed well with the 45% found on the large area analysis of several dozen particles. It was considerably higher than the 25% w/w loading in the final formulation. 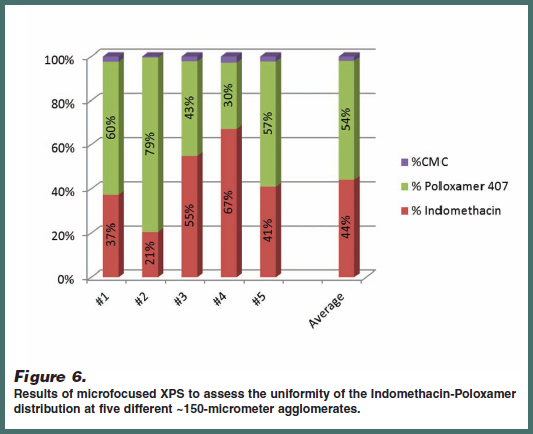 This article introduced an important analytical tool for quantitatively probing the chemistry of the outer few nanometers of pharmaceutical materials. X-ray photoelectron spectroscopy (XPS) is a quantitative, surfacesensitive spectroscopy capable of probing the local chemical bonding of inorganic and organic materials. In this study, we use XPS to quantify the amount of an API (indomethacin) and two excipients (sodium carboxymethylcellulose and Poloxamer 407) present on the outer surface of individual particles. Analyses were done both in aggregate (to provide a snapshot of the average surface composition) as well as on individual particles (to assess surface chemical uniformity). Understanding the surface concentration of various components in pharmaceutical powders is critical for controlling performance parameters, such as solubility, dissolution, stability, flowability, agglomeration, and crystallinity. n 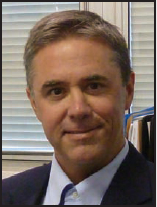 Jeffrey R. Shallenberger is Senior Director of Analytical Services of Evans Analytical Group, a contract analytical services company specializing in surface, trace, and microscopy services. Prior to joining EAG, he was Director of the Materials Characterization Laboratory and Associate Director of the Materials Research Institute at Pennsylvania State University. Mr. Shallenberger earned his BS and MS in Materials Science and Engineering from Pennsylvania State University. He has numerous publications and presentations dealing with surface chemistry of semiconductors, glasses, polymers, catalysts, and pharmaceuticals. 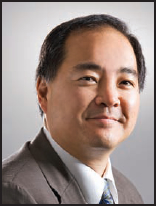 Dr. Robert W. Lee is Vice President of Pharmaceutical Development at Particle Sciences Inc. He is responsible for product development at Particle Sciences as well as providing support to clinical manufacturing operations and business development. His responsibilities include oversight of formulation development, drug delivery, analytical sciences, quality control, and quality assurance. Before joining Particle Sciences, Dr. Lee held senior management positions at Novavax, Inc., Lyotropic Therapeutics, Inc., and Imcor Pharmaceutical Co. Dr. Lee earned his BS degrees in Biology and Chemistry from the University of Washington and his PhD in Physical Bioorganic Chemistry from the University of California-Santa Barbara. Dr. Lee has published articles in numerous peer-reviewed journals and three book chapters plus holds 11 issued patents and 14 provisional or PCT patent applications. He has more than 20 years of experience in pharmaceutical research and development of both therapeutic drugs and diagnostic imaging agents. He maintains strong academic ties, including an appointment as Adjunct Associate Professor of Pharmaceutical Chemistry at the University of Kansas in 1992, a reviewer for both the International Journal of Pharmaceutics and Journal of Pharmaceutical Sciences, and Editorial Advisory Board member for Drug Development & Delivery.