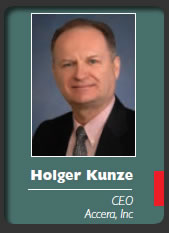 Alzheimer’s disease (AD) is the most common cause of dementia. Thirteen percent of all individuals over the age of 65, or one in eight, have AD. Someone in America develops AD every 69 seconds, and while medications for treating AD exist, there is no cure. Accera, Inc., a privately held, fully integrated development and commercializationstage company, is focused on the discovery and development of pioneering therapeutics for serious diseases, such as AD. Accera’s lead product, Axona®, currently marketed in the US as a prescription-only medical food for the clinical dietary management of mild-to-moderate AD, addresses metabolic deficiencies and provides an alternative energy source for the brains of AD patients. Specialty Pharma recently interviewed Holger Kunze, CEO of Accera, to discuss the company’s novel approach to treating AD by addressing cerebral hypometabolism.

Q: Can you please discuss AD and its current prevalence in the US?

A: As the number of people 65 years and older in the US continues to grow, the number of AD patients will increase. Alzheimer’s is the most common cause of dementia, and 13% of all individuals over the age of 65, or one in eight, have this disease. Alzheimer’s affects the parts of the brain that control memory, thought, and language. Doctors do not know the exact cause of this disease; however, medical research is working to discover what causes it and how to best treat this condition. Alzheimer’s is progressive and affects people in different ways. Although each case of Alzheimer’s is unique to each specific patient, there are similarities in the signs and symptoms that develop as the disease progresses.

A: One of the hallmark signs of Alzheimer’s is the significant drop in the brain’s ability to metabolize glucose, which is the primary source of fuel for the brain. This is known as cerebral hypometabolism. Research has shown that decreases in glucose metabolism can be seen in the brain 10 to 20 years before any clinical AD symptoms appear. Normal, healthy brains depend on circulating glucose to carry out most of its functions, including memories. Decreases in glucose metabolism correlate with decreases in brain function in AD patients.

Axona is designed to combat cerebral hypometabolism by providing the brain with an alternative source of fuel. Axona contains caprylic triglyceride, a medium chain triglyceride that is broken down by the liver into ketone bodies, which patients can metabolize to use as fuel for the brain.

Q: How does Axona differ from other currently available AD treatments?

A: The first class of FDA-approved medications for AD has been formulated to increase the levels of Acetylcholine, a chemical responsible for memory in the brain. This class is called cholinesterase inhibitors. The primary members of this class are Exelon and Aricept. While these treatments have been proven effective, many AD specialists believe patients benefit from a conjunctive or complementary plan that combines different courses of treatment.

In addition, cholinesterase inhibitors do not alleviate the cerebral hypometabolism present in the brains of these patients. Axona’s ability to provide the brain with an alternative source of energy makes it different from all other currently available AD treatments.

Q: Axona comes in a powder form. Can you explain how Axona should be administered?

A: Axona is available in individual powder packets of 40 g per packet. It is recommended patients start with a reduced dose of 10 g a day and gradually work their way up to a full dose over the course of a week. Once acclimated to Axona, patients take only one packet of Axona once a day, shortly after breakfast. Axona should be added to 4 to 8 ounces of water or other liquids and be fully blended until mixed. These are the standard, recommended dosing instructions for Axona; however, each patient should work with his or her physician to determine the best and most effective dosing strategy.

A: The category of medical foods was defined by the FDA in the Orphan Drug Act in 1988 as a food that is formulated to be consumed orally under the supervision of a physician, and which is intended for the specific, dietary management of a disease or condition. Medical foods are not subject to the FDA’s full approval process for medication; however, medical foods have a generally regarded as safe (GRAS) status under the FDA. Medical foods are more potent and effective than nutraceuticals and supplements. Supplements are intended for normal, healthy adults and do not require any pre-market efficacy testing, while medical foods are intended to treat patients with a specific illness or disease. Medical foods, unlike nutraceuticals and supplements, MUST be taken under medical supervision.

Q: Is there clinical data showing that Axona is safe and effective?

A: Axona has been tested in both a single-dose study and clinical trials with patients with mild-to-moderate AD, as well as healthy elderly volunteers. The single-dose study was conducted on 20 patients diagnosed with AD or mild cognitive impairment. The results showed a positive response, with improvement in paragraph recall and the AD Disease Assessment Scale – Cognitive subscale (ADAS-Cog) test. Peer-reviewed results were published in Neurobiology of Aging, in 2004.

Axona was also studied in a double-blind, randomized, placebo-controlled study performed at multiple US sites. The trials involved 152 patients with mild-to-moderate AD over a period of 90 days. As Axona is designed to function as a complementary therapy, about 80% of those patients were receiving standard-of-care AD therapy, including the use of cholinesterase inhibitors and NMDA anatagonists. The results showed a significant improvement in cognitive function in patients taking Axona after 45 days and demonstrated a decline in patients in the placebo group. The results also showed that cognitive benefits could be maintained over a period of time in the Axona patients.

Peer-reviewed results were published in Nutrition & Metabolism in August 2009 in the article titled Study of the Ketogenic Agent AC-1202 in Mild-to-Moderate Alzheimer’s Disease: a Randomized, Double-Blind, Placebo-Controlled, Multicenter Trial.

Q: Can Axona be taken with the cholerestinase inhibitors that are currently available for AD patients?

A: Axona has been designed to complement the existing AD therapies currently on the market. Patients in clinical trials were permitted to take commonly prescribed AD medications, and additional improvements following Axona administration were observed even for those patients taking these other medications.

Q: Who do you see as Axona’s chief competitors?

A: Among currently available, prescription-only therapies for AD, Axona has no direct competitors, as no other AD medication targets cerebral hypometabolism. More importantly, as Axona can be taken along with cholinesterase inhibitors, it is not competing directly with this class.

Q: Does Accera currently have any partnerships?

A: Accera is not currently affiliated with any partners, but is actively seeking strategic partners interested in advancing ccera’s technology to other indications and promoting global adoption of Axona. Additionally, Accera is exploring strategic partnerships to maximize the commercial success of Axona in and outside the US. 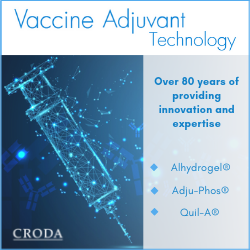